So, I realize it’s the fouth of July and I had totally intended to sit down and provide you with some pretty patriotic pictures of our party prep.  But, when I clicked on Facebook a few minutes ago and read that a friend of mine found a bat in her bathroom this morning I realized this just can’t wait any longer.  Honestly, I was still trying to wrap my head around everything that has gone down the last two days.  Here goes…

I am an extremely light sleeper and woke up around 4AM on Tuesday morning to a slight sound in our bedroom.  I sat up and, while I couldn’t see anything, I could hear something moving around the room.  I woke Honey up and, as my eyes started to adjust to the light, I could tell there was something actually flying in the room.  We assumed it was a bird and Honey got up to turn on the light.  When he did, he screamed bat and ran out of the bedroom and shut the door.  Um… yes… you read that right…. shut the door with his lovely wife INSIDE of the room with the bat.  :-)  The thing was flying around like crazy, swooping and diving all over the room.  I laid down under the covers and just screamed.  Honey instructed me to crawl towards the door with the pillow over my head.  I did and he let me out.  He left me guarding the door while he went down to the garage for “supplies” (ie. his fly fishing net and tennis racket)  He came back up and pretty easily caught the thing in the net.  I happened to have my super zoom lens on my camera and was able to snap this picture (from way across the room…I am not this brave.) 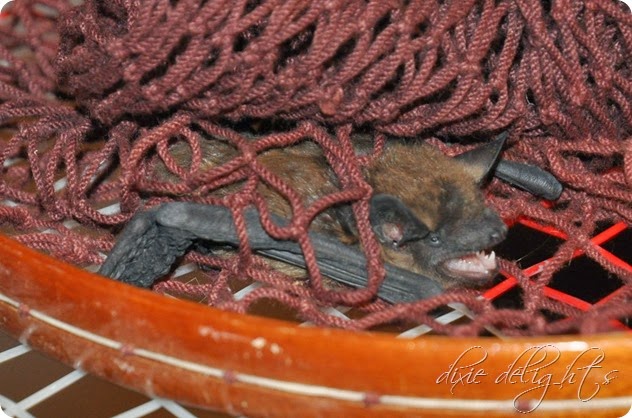 Honey, animal lover to a fault, released the bat outside and we got on with our day.  Thinking we may never sleep again. 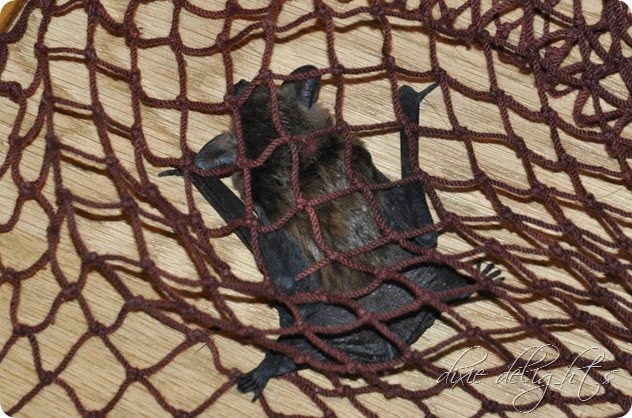 A few hours later, I posted a pic of the bat on instagram.  My big sis H immediately texts me that I need to call my doctors and tell them.  Then her big sis sends me a note that I need to take this seriously.  I thought it was overreaction, but later came to find out that they both had different friends that had dealt with this and neither knew the other had contacted me.  This is going to sound extreme, but they might have saved our lives.

A few hours later, we are all four admitted to the ER.  Different ERs, by the way, because nothing can be simple.  The kids at Children’s and us at Northside.  We were starting Day 0 of treatment for rabies exposure – each receiving between 3 and 5 shots in our arms, thighs and bottoms.  We will each be re-admitted to the ER three more times over the next two weeks to continue the treatment.  The cost is staggering – $25,000-35,000 per person.  The alternative is certain death if any of us were infected by the bat.  It’s a real live nightmare.

Here’s a list of things I never knew about bats.  Nobody, other than my big sis and her big sis that I’ve told this story to knew.  I feel compelled to share…

So, while I am certain that I did not get bitten or scratched by the bat, Honey is a heavy sleeper and very well could have had it sitting on his head and not woken up.  He also handled the bat.  I argued that I would have known if the bat was in my kids room, but my pediatrician put it bluntly – “Can you say with 100% certainty it didn’t go in their room? Was the door open? (yes) How would you feel if they DIE OF RABIES?”  And, in spite of my certainty, Honey insisted that I be treated too.  It was a tearful night in the ER.

I have peace of mind now that we won’t die of rabies, even though I am still a bit skeptical about the whole thing.  The cost is staggering and we have no answers yet as to what our insurance will cover.  We still have 9 more ER visits ahead between us.  Tons more injections and lots of time and money.  But we don’t have the bat and every single professional we talked with said this was the right course of action.   On a much lighter note, my sweet friend M delivered this bottle of Batman Brand Elixir to my back porch the next morning. 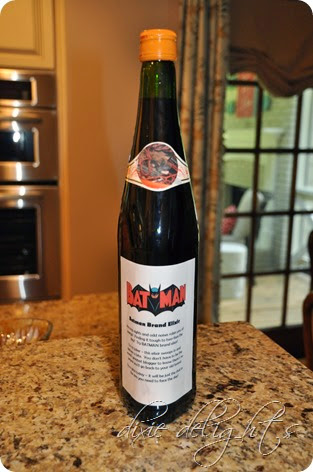 I love a friend that will carefully print and cut out images of your bat and write a pun-laden poem to cover a bottle of Sangria.  She’s the kind of friend that will cry right along with you, but takes the first opportunity to make you laugh too :-) 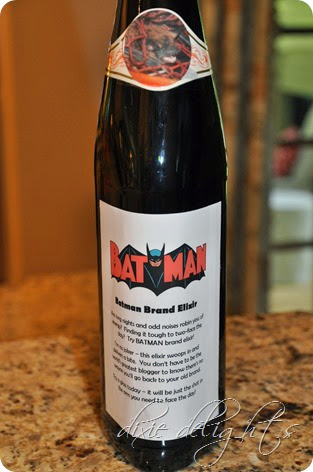 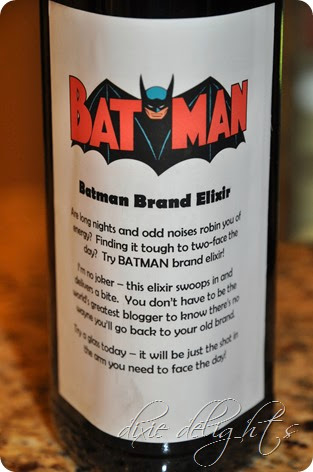 So, spread the word.  Bats play an important role in our ecosystem, but humans should take all precautions to steer clear of them.
xoxo

PS. The day before my car overheated and is in the shop.  When it rains it pours.

By dixiedelights | Filed under Uncategorized | Tags: I have no tag for this, PSA