There’s nothing I love more in the summer than basking in the sun lost in the pages of a great book.  And in the course of one unproductive, sleepless week I gobbled up what I’ve dubbed “a trilogy of Southern reads.”

Good
Looking for Salvation at the Dairy Queen was just a sweet read about sisters, small town ways and self discovery.  It reminded me of my own trek to the big city of Atlanta seventeen years ago.

Amazon says:
Sometimes you have to return to the place where you began, to arrive at the place where you belong.  It’s the early 1970s. The town of Ringgold, Georgia, has a population of 1,923, one traffic light, one Dairy Queen, and one Catherine Grace Cline. The daughter of Ringgold’s third-generation Baptist preacher, Catherine Grace is quick-witted, more than a little stubborn, and dying to escape her small-town life.  Every Saturday afternoon, she sits at the Dairy Queen, eating Dilly Bars and plotting her getaway to the big city of Atlanta. And when, with the help of a family friend, the dream becomes a reality, Catherine Grace immediately packs her bags, leaving her family and the boy she loves to claim the life she’s always imagined. But before things have even begun to get off the ground in Atlanta, tragedy brings her back home. As a series of extraordinary events alters her perspective–and sweeping changes come to Ringgold itself–Catherine Grace begins to wonder if her place in the world may actually be, against all odds, right where she began.

Better
I’m not sure what I could say about The Help that hasn’t already been said.  I mean, they’re making a movie out of it (which I await with bated breath) for goodness sake!  It’s a pager-turning Southern read resplendent with colorful characters, historical validity and a superb story line.  I would have made it my “best” if it hadn’t ended so abruptly – leaving me wanting to know SO MUCH MORE.

Amazon says:
Jackson, Mississippi, in the early 1960s is a city of tradition. Silver is used at bridge-club luncheons, pieces polished to perfection by black maids who “yes, ma’am,” and “no, ma’am,” to the young white ladies who order the days. This is the world Eugenia “Skeeter” Phelan enters when she graduates from Ole Miss and returns to the family plantation, but it is a world that, to her, seems ripe for change. As she observes her friend Elizabeth rudely interact with Aibileen, the gentle black woman who is practically raising Elizabeth’s two-year-old daughter, Mae Mobley, Skeeter latches ontothe idea of writing the story of such fraught domestic relations from the help’s point of view. With the reluctant assistance of Aibileen’s feisty friend, Minny, Skeeter manages to interview a dozen of the city’s maids, and the book, when it is finally published, rocks Jackson’s world in unimaginable ways.

Best
I so immensely enjoyed Saving CeeCee Honeycutt that it was a one night (on my bed) stand kinda book.  Maybe it’s that it’s set in 1960s Savannah or perhaps it’s the colorful characters.  Whatever it is, I finished this one up quicker than chicken in crisco.  It was fluffy and easy and just plain entertaining.

Amazon says:
Twelve-year-old CeeCee Honeycutt is in trouble. For years, she has been the caretaker of her psychotic mother, Camille-the tiara-toting, lipstick-smeared laughingstock of an entire town-a woman trapped in her long-ago moment of glory as the 1951 Vidalia Onion Queen. But when Camille is hit by a truck and killed, CeeCee is left to fend for herself. To the rescue comes her previously unknown great-aunt, Tootie Caldwell.   Tootie whisks CeeCee away to Savannah’s perfumed world of prosperity and Southern eccentricity, a world that seems to be run entirely by women. From the exotic Miz Thelma Rae Goodpepper, who bathes in her backyard bathtub and uses garden slugs as her secret weapons, to Tootie’s all-knowing housekeeper, Oletta Jones, to Violene Hobbs, who entertains a local police officer in her canary-yellow peignoir, the women of Gaston Street keep CeeCee entertained and enthralled for an entire summer. 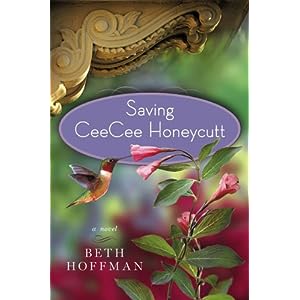 9 thoughts on “On My Bedside”