I mentioned last month that Mother and Daddy-O were taking a ride on the Disney Dream. Without us. Say whaaaatttttt? This was a fairly last minute jaunt (a perk of retirement with an empty nest and living just a couple of hours from the port) that they took with good friends. It was the first time doing the three night Dream itinerary to Nassau and Castaway Cay but they said it was every bit as enjoyable as the four night! I get a lot of questions about taking this cruise without children, so I thought it the perfect opportunity to share their experience. 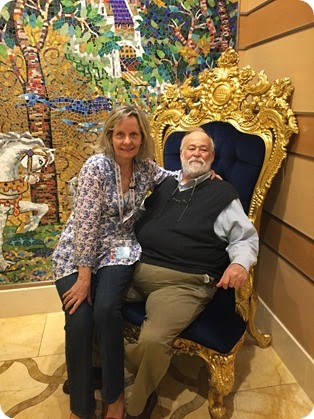 Since they didn’t have so much extra baggage (ie. two daughters, two sons in law and four grands) they went with a deck 11 veranda room. And they said while our usual deck 2 magic porthole room is fun and affordable, they might never be able to join us down there again. I wish they had grabbed a few shots of the room in its entirety, but the exterior wall was just a huge glass door that opened onto a little veranda. The sitting area and sleeping area are flip-flopped in this set up. Daddy-O and P have been friends since the college roommate days. They made their way down to The District in the evenings. We have made a couple of cameos there on our trips, but would love to spend more time. These photos are from PINK where the décor mimics the inside of a champagne glass. Their favorite evening lounge was Skyline (adding to my list)! Apparently it’s a must do! In Nassau Mother and B got off the boat for the first time, while Daddy-O camped out poolside and P went to the gym (no thanks). Mother said she probably won’t disembark here again. They walked straight past our usual spot at the family pools and headed for the adult pool. They said the adult pool was just lovely. Not crowded. Swim up bar. A little café. The guy in the lower left is a testament to this. Seems delightful, no?!

In Castaway Cay, they followed suit and eagerly boarded the Serenity Bay tram to the adult beach. They said it was super relaxing and not at all crowded. There was a beachside yoga class, hammocks, waiters to deliver drinks, and the likes. The water here was crystal clear and they saw huge foot long star fish and sting rays swimming by. I was pleasantly surprised to hear they met Captain Jack Sparrow there. He was apparently bumbling along after a little too much grog. Serenity Bay has its own dining facility like Cookies and Cookies 2 at the family beach. They said it is WAY less crowded and the food was a bit more upscale. I need to go here. Some other favorites on their trip were catching movies in the theater and watching the fireworks from the Currents lounge overlooking the adult pool.

They had such a wonderful trip, in fact, that they took advantage of another onboard booking for this fall. The friends they went with are veteran cruisers, but this was their first Disney voyage. I was excited to hear that they deemed it the best cruise they’d ever been on! The Disney service and attention to detail just cannot be surpassed. If you have any questions about an adult only Disney Cruise, feel free to post them here and I’ll get answers!
xoxo

5 thoughts on “Disney Dream for Adults”