Good morning, adventurers!  I am so excited to take y’all along on a journey to the Jungle Navigation Co. Ltd. Skipper Canteen in Disney’s Magic Kingdom today.  The same skippers who navigate the storied waters of the Nile, Amazon and Congo Rivers across the way at the Jungle Cruise now feed famished families and fellow adventurers on during their down time.  When you arrive at the Skipper Canteen, you are invited to wait in a lovely covered courtyard area that seems miles away from the hustle and bustle of Adventureland. 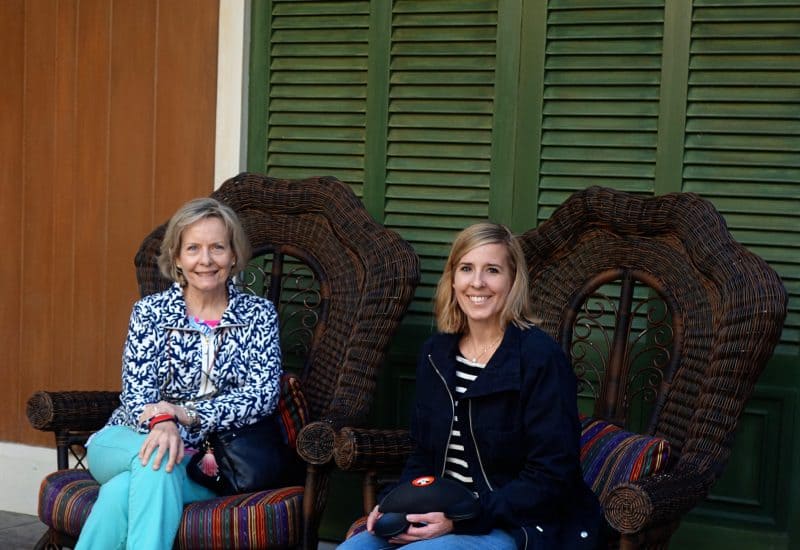 You will be led to a table in one of three curiously quirky rooms.  The crew’s colonial-era Mess Hall is full of fun artifacts from treks of yore.  Be sure to check out all of the bulletin boards, take a peek at upstairs offices, and read the captions on the pictures.  No detail has been overlooked. 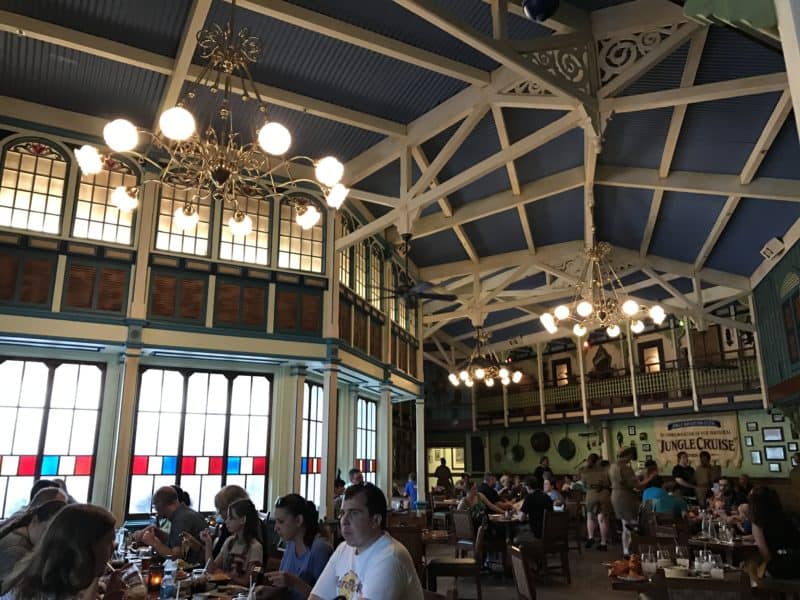 While you will be seated in one of the three rooms, you should absolutely take a tour of them all.  As you head between the bookcases off of the Mess Hall, be sure to peek at the titles.  Each and every one of them ties back to the Jungle Cruise and Magic Kingdom.  You’ll find titles including Wishes on a Star, Temple Crashing, Croc Wrastlin, and Surviving Falls from Great Waterfalls. 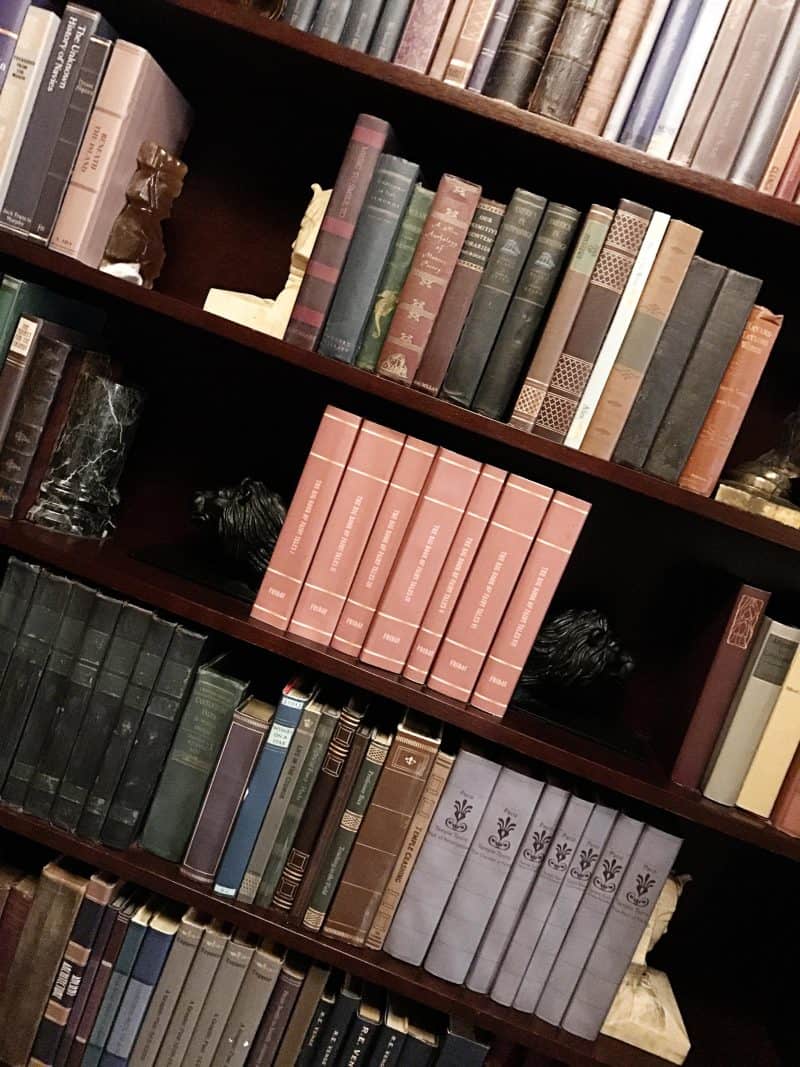 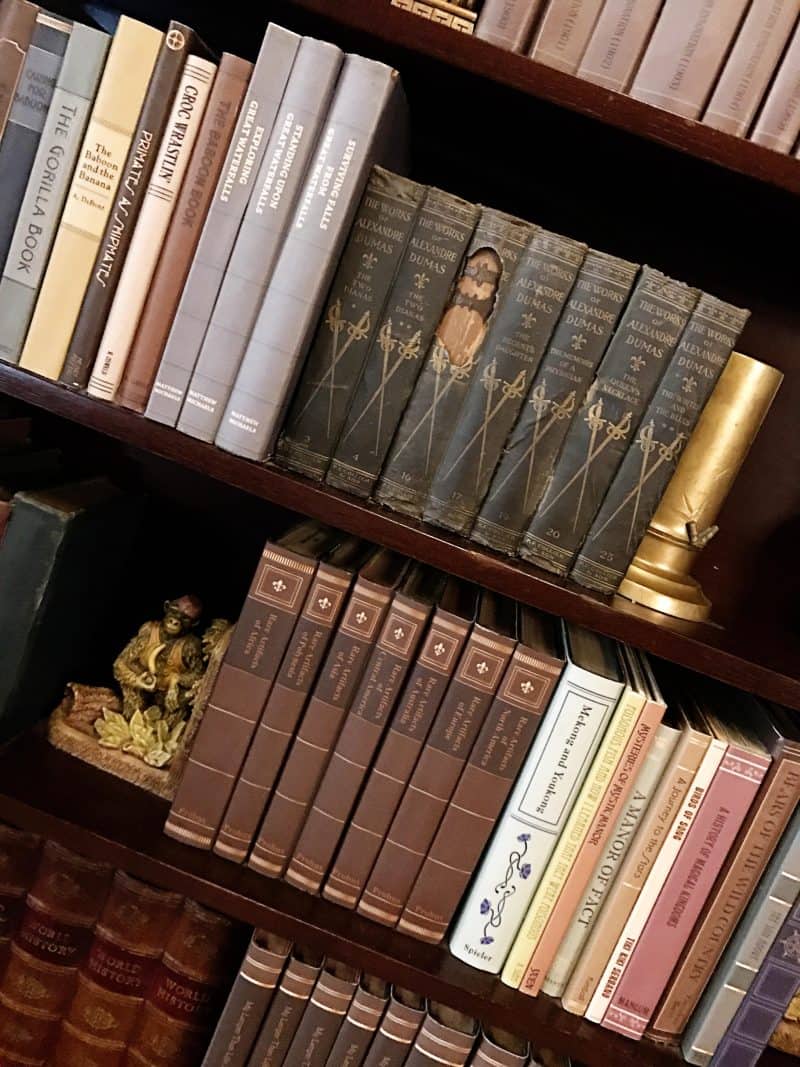 The proprietor of the restaurant is none other than Dr. Albert Falls, perhaps most recognizably known as the man behind Schweitzer Falls across the way :-)  He founded the Jungle Navigation Co. in 1911, a shipping business that moved cargo along the jungle rivers.  Well, the famous explorer Dr. Falls was also a member of the Society of Explorers and Adventurers, or S.E.A.  Just between the bookcases you can now dine in the once-hidden room that served as a secret meeting place for the Society of Explorers!  This is my favorite room of the three and I just love the decor and attention to detail. 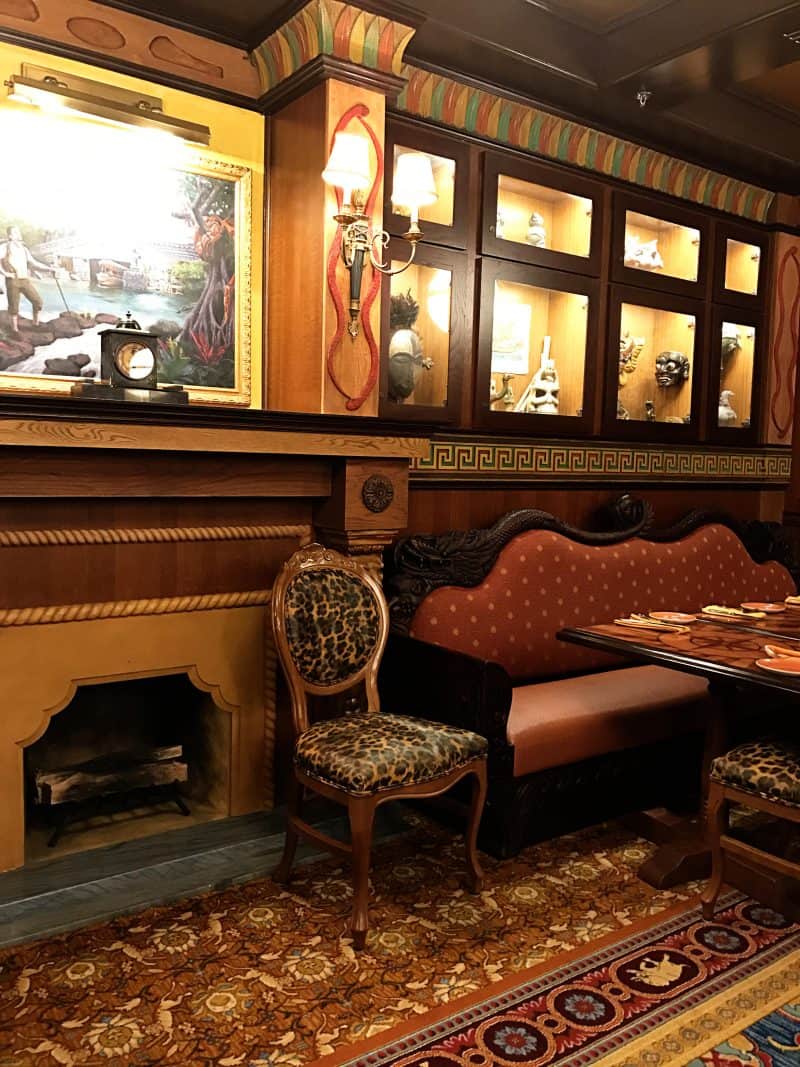 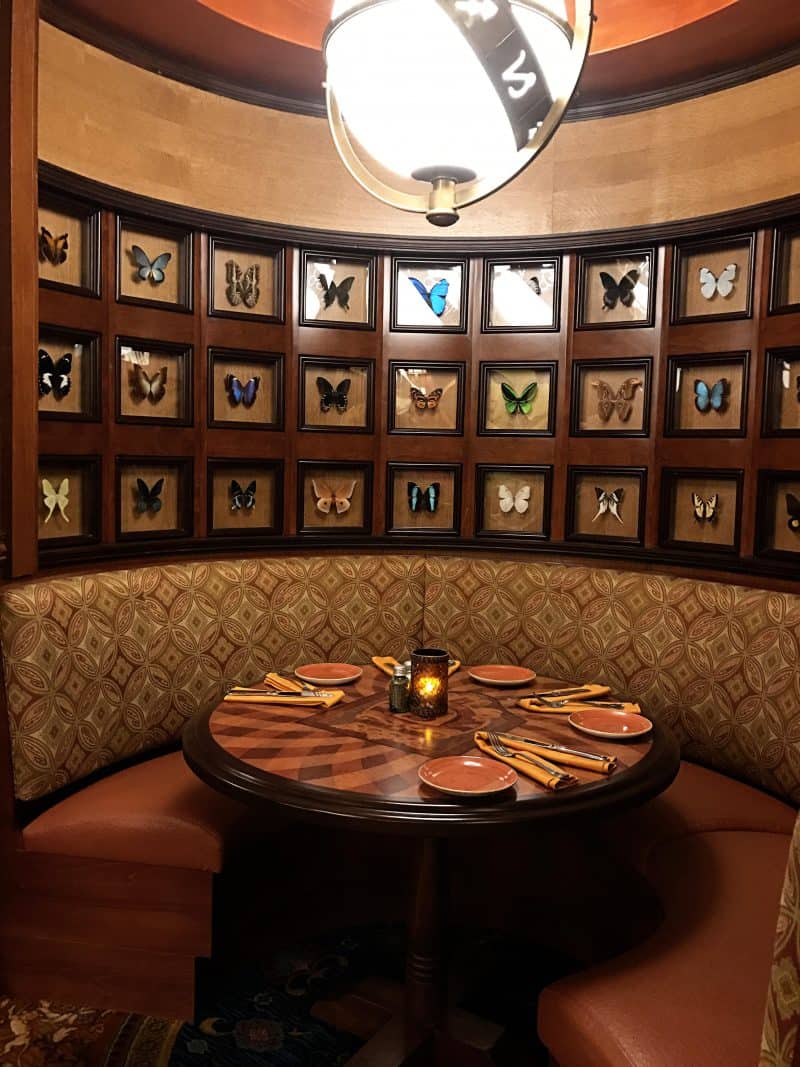 The third space is known as the Jungle Room and was formerly the family parlor of Dr. Albert Falls.  You will feast among the family’s belongings and personal decor.  Ilove the chandeliers and their nod to the Tiki Room down the way. 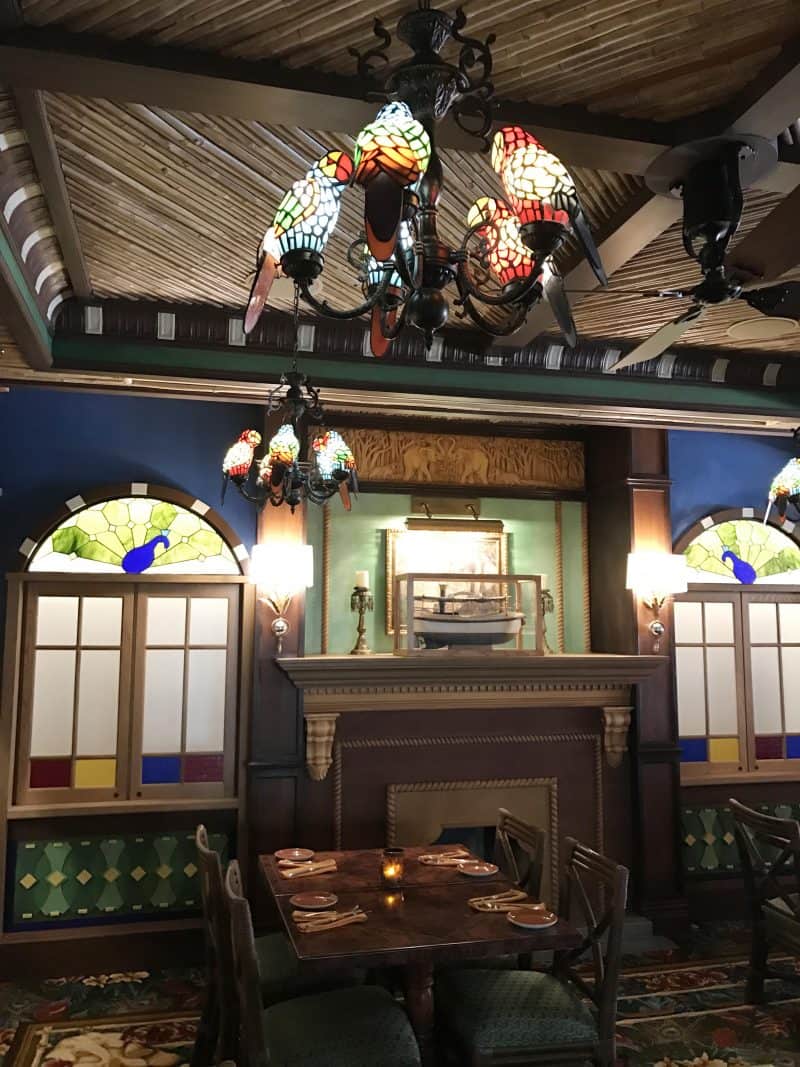 While we adore the theming and complete immersion that you feel inside of Skipper Canteen, we also LOVE the adventurous and exotic menu with cuisine inspired by the flavors of Asia, South America, and Africa.  You won’t find anything like it in the park! Here are our favorites: 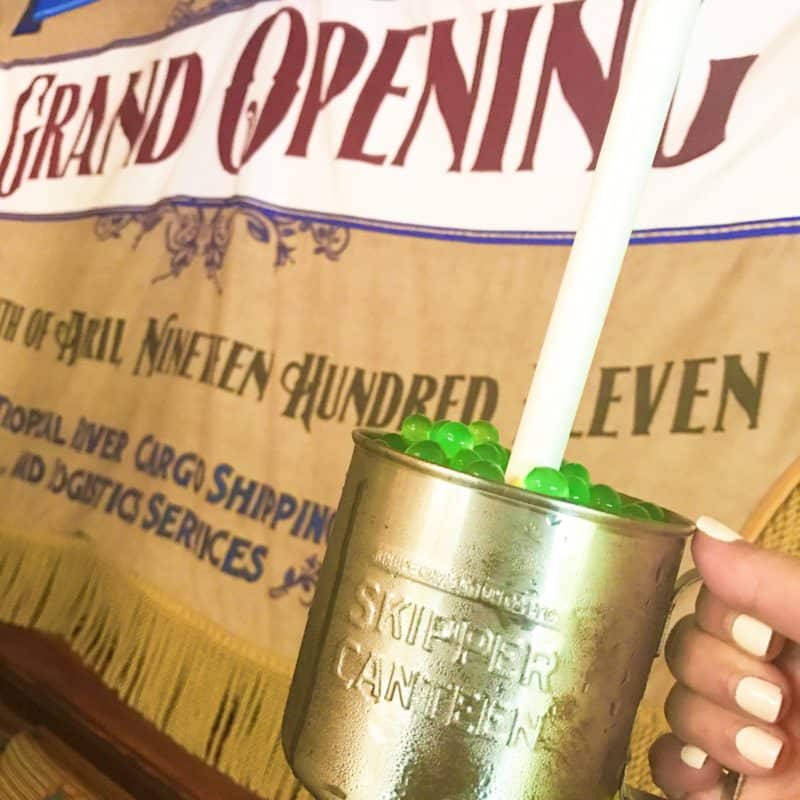 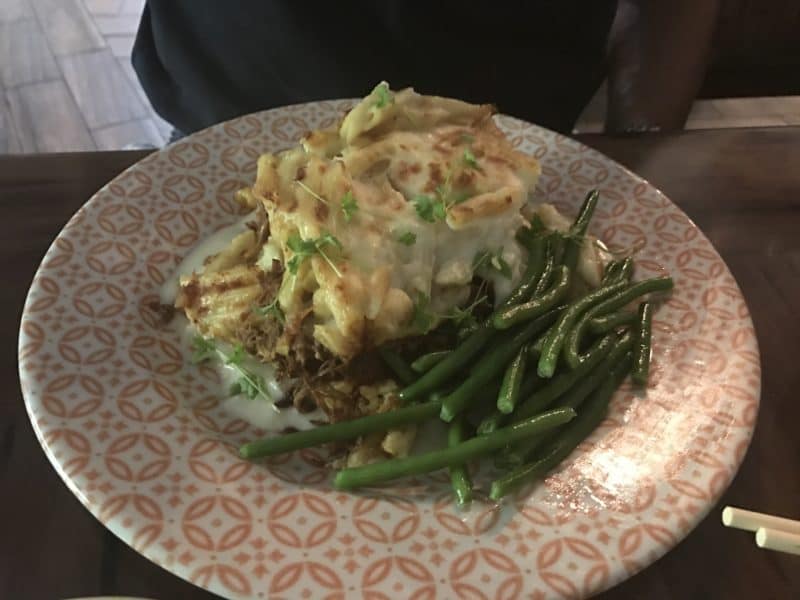 Now in the the event that I have any other crazy fans out there (hello?? anyone??), I am going to go total dis-nerd on you. There is even a story spun behind the salad.  Yes, you read that right – the salad.  When I read on the menu that it was “Famously served at Hotel Hightower on December 31, 1899”, I HAD to know what that meant.  And the answer just had me completely enamored and marveling at the incredibly detailed and fascinating web that Disney imagineers have created.

At Tokyo DisneySea, instead of a Twilight Zone Tower of Terror experience, the ride tells the story of the mysterious midnight disappearance Hightower Hotel founder, Harrison Hightower III, at the dawn of the 20th Century.  From DisUnplugged…

Disney’s Harrison Hightower III was a ruthless American millionaire who took the treasures of the world to decorate his new Hightower Hotel. Harrison Hightower III had little regard or concern for the significance of the antiquities he collected. Until ultimately, in the time-honored Disney way for its attractions, something goes horribly wrong. On midnight, New Year’s Eve, 1899 those same artifacts cursed Harrison Hightower III, and he disappeared forever. Today (the story goes), the “New York City Preservation Society” restored the landmark hotel and started giving tours to the public – but at what risk? Beware of that first step off the elevator…  read more

So, do you see what they did there?!  The Shiriki Noodle Salad was “Famously served at Hotel Hightower on December 31, 1899”.  The very night Harrison Hightower III mysteriously disappeared!  You might have also noticed that the banner notes the inugural Jungle Cruise was on October 1, 1931, exactly 40 years before the attraction opened with Magic Kingdom in 1971.  I love these kinds of details :-) 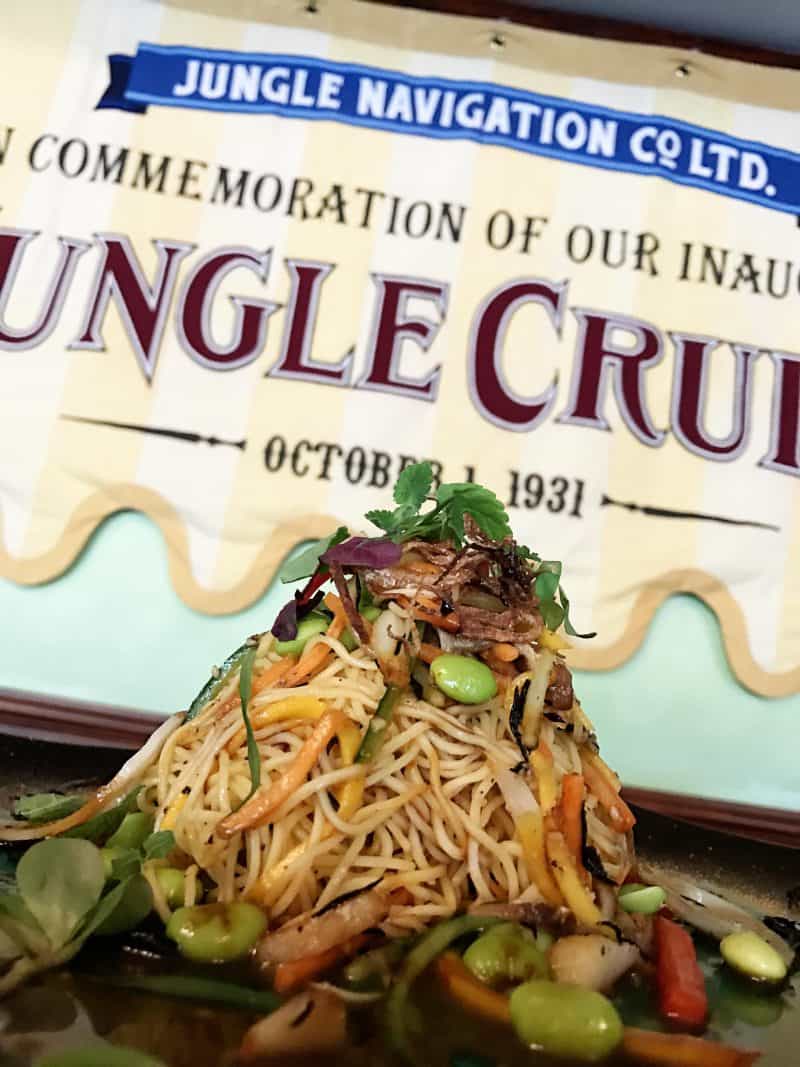 Since Skipper Canteen is just across the way from Jungle Cruise, it has become our little tradition to schedule a fast pass for the ride just before we eat.  The attraction is original to the park and is a must-do for us on every visit. 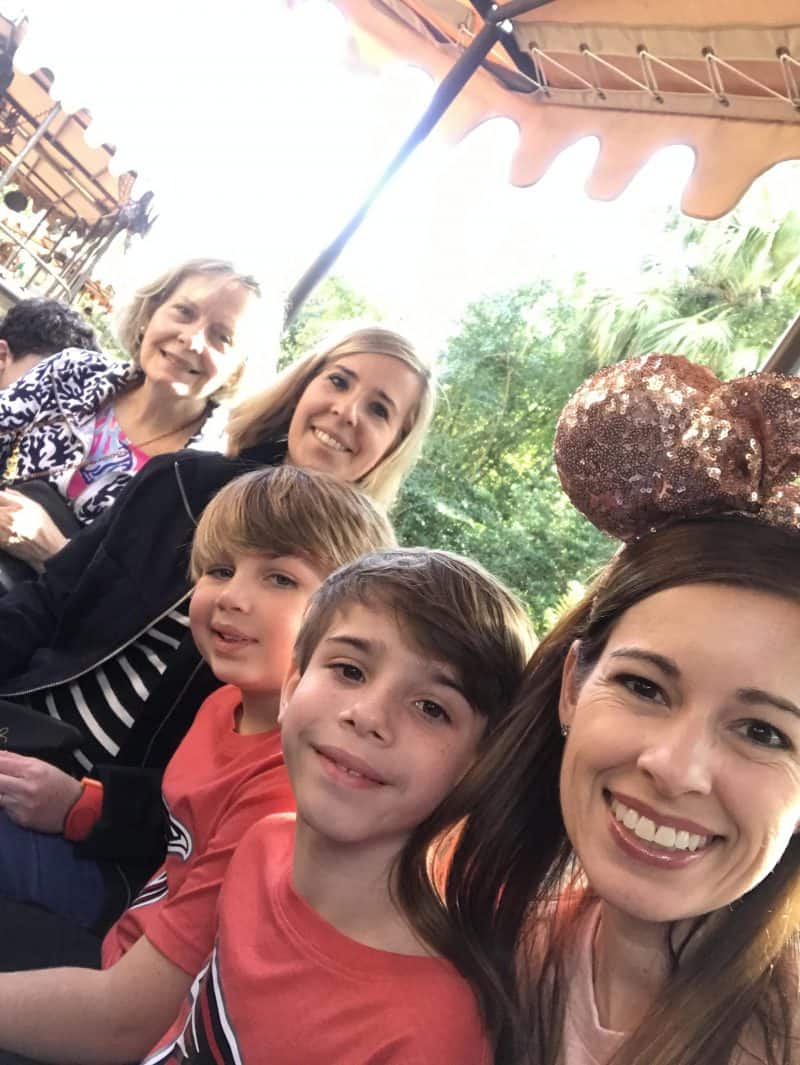 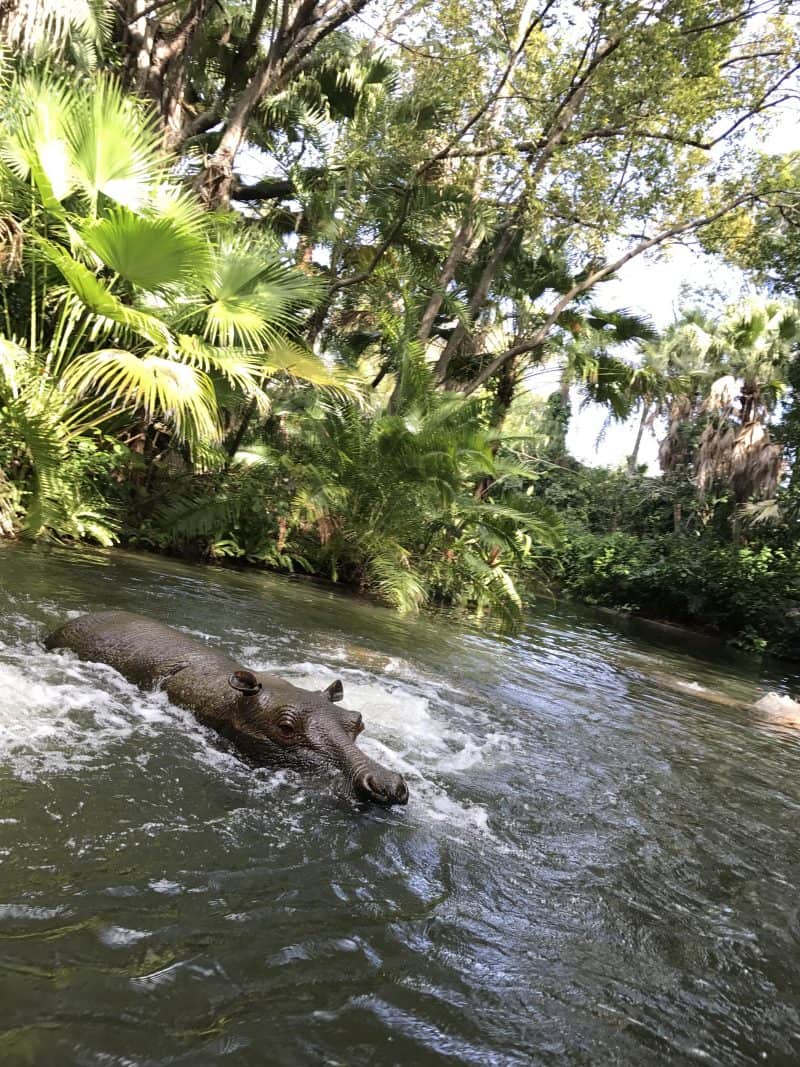 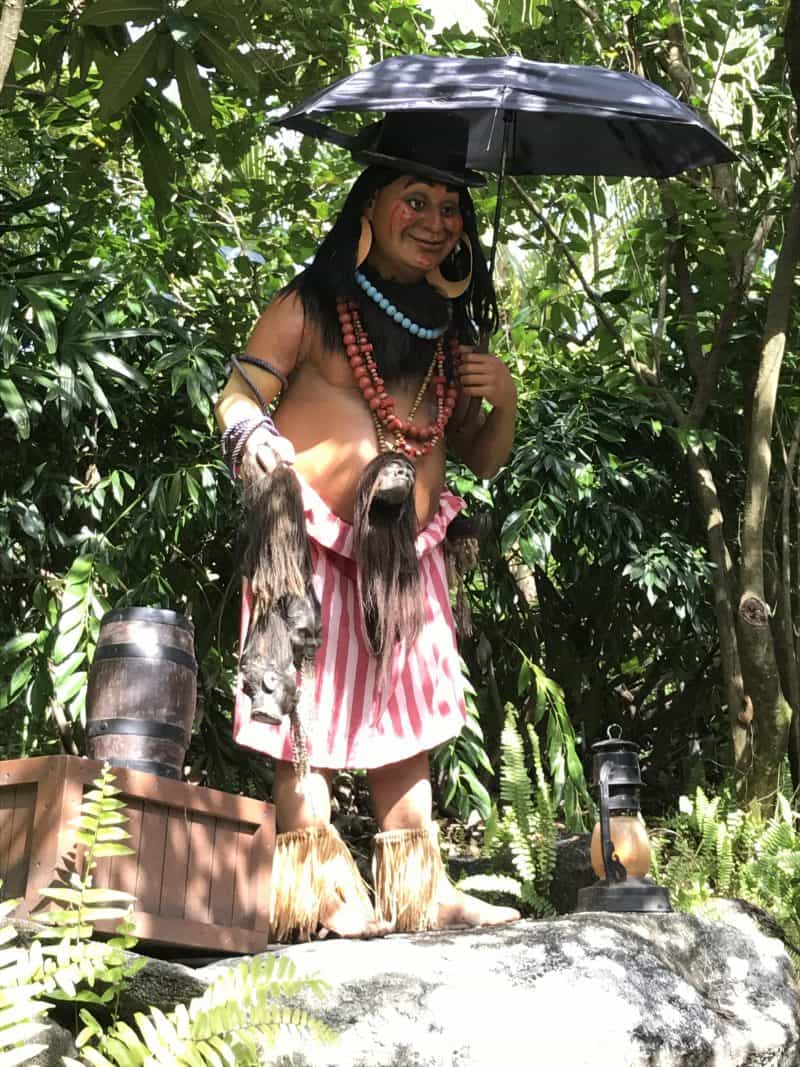 This is one of my favorite pictures from our February trip – pure bliss as he passes by the backside of water. 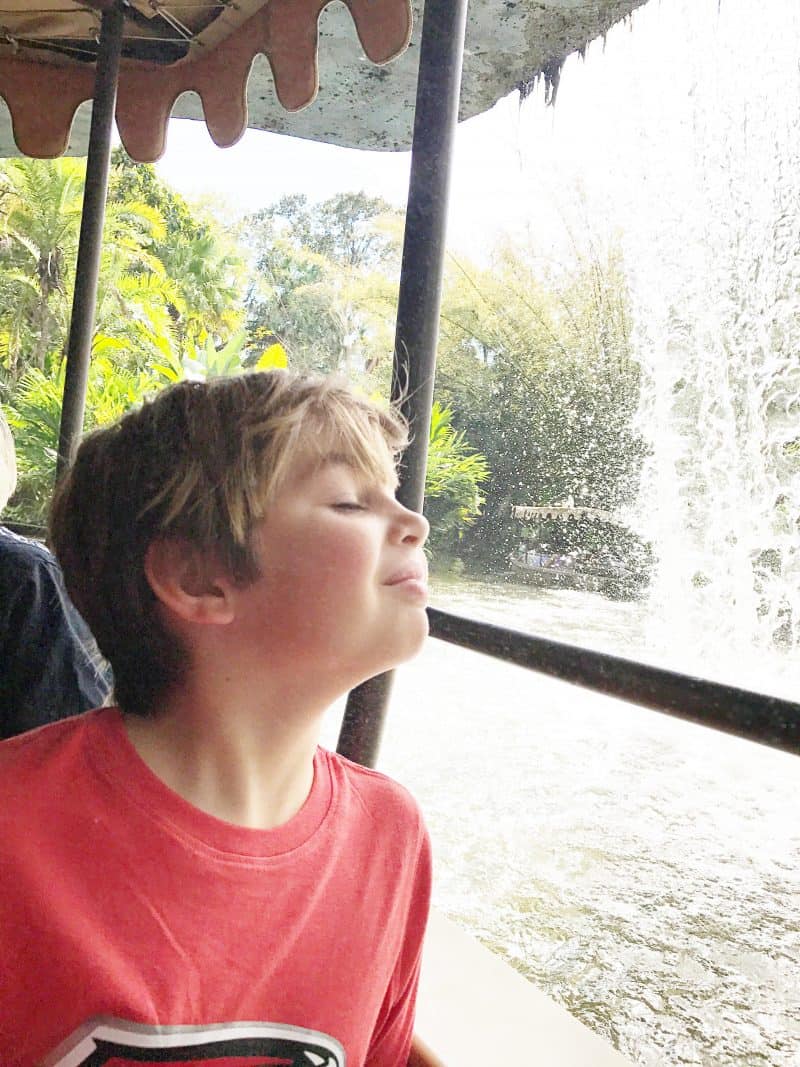 While I’m on the topic of Jungle things, I’d be remiss if I didn’t also encourage you to visit Jungle Cruise at Christmas when it becomes Jingle Cruise. 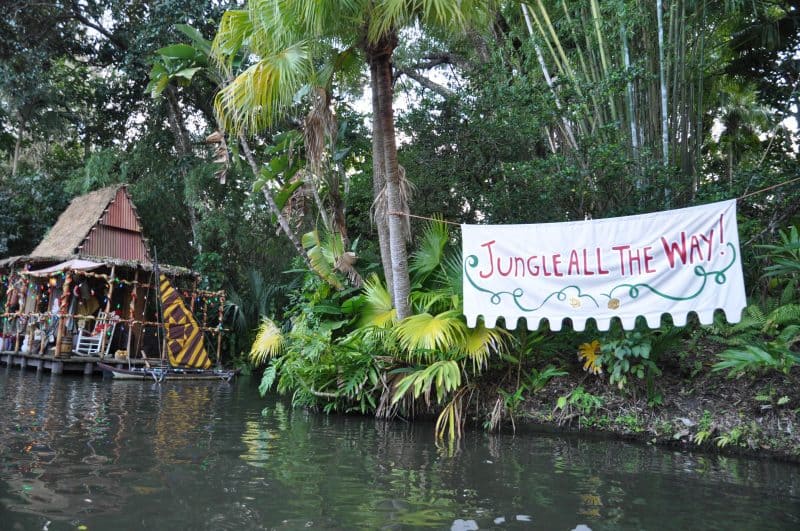 Of the Magic Kingdom table service restaurants I’ve done, this is the clear winner in terms of both ambiance and cuisine.  A few tips:

Outside of Be Our Guest, this is our favorite sit down restaurant in Magic Kingdom.  I also think its a great option for adventure seeking boys.