Last weekend Honey and I ditched all responsibility, left the boys with the grands and skipped down to Disney for an adult weekend in our happy place!!  It is way too hard for us to get away for our anniversary in mid-May so this seemed close enough to celebrate our sweet sixteen.

The highlight of our trip was the runDisney Star Wars Dark Side 10k!  We arrived in Orlando Thursday night and hit the Expo at the ESPN Wide World of Sports Friday afternoon before heading into the parks. 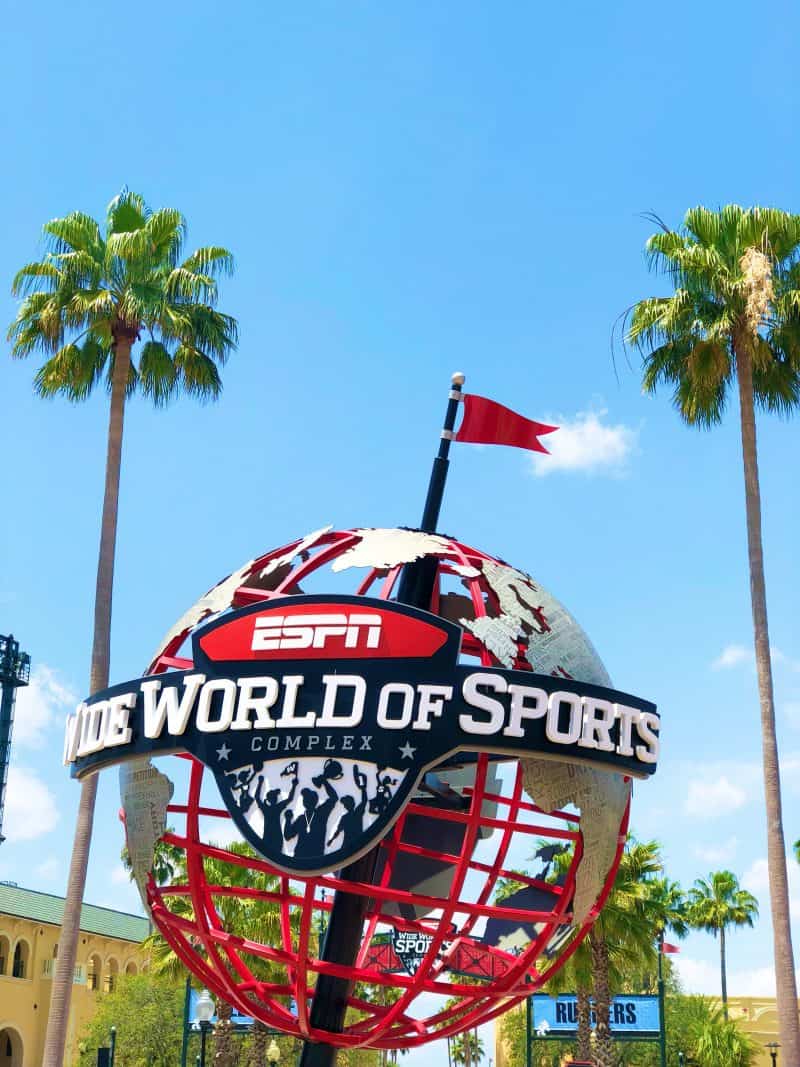 Disney races do not give you the option of mail, same day or even after hours pick-up (nor can you have someone else on your behalf) for your numbers and shirts, so you really have to be sure you are in Orlando the full day before your first race.

We always love perusing the merchandise at the Expo.  I think they were serving some sort of cocktail in these awesome mugs.  The Star Wars stuff was all pretty fabulous! 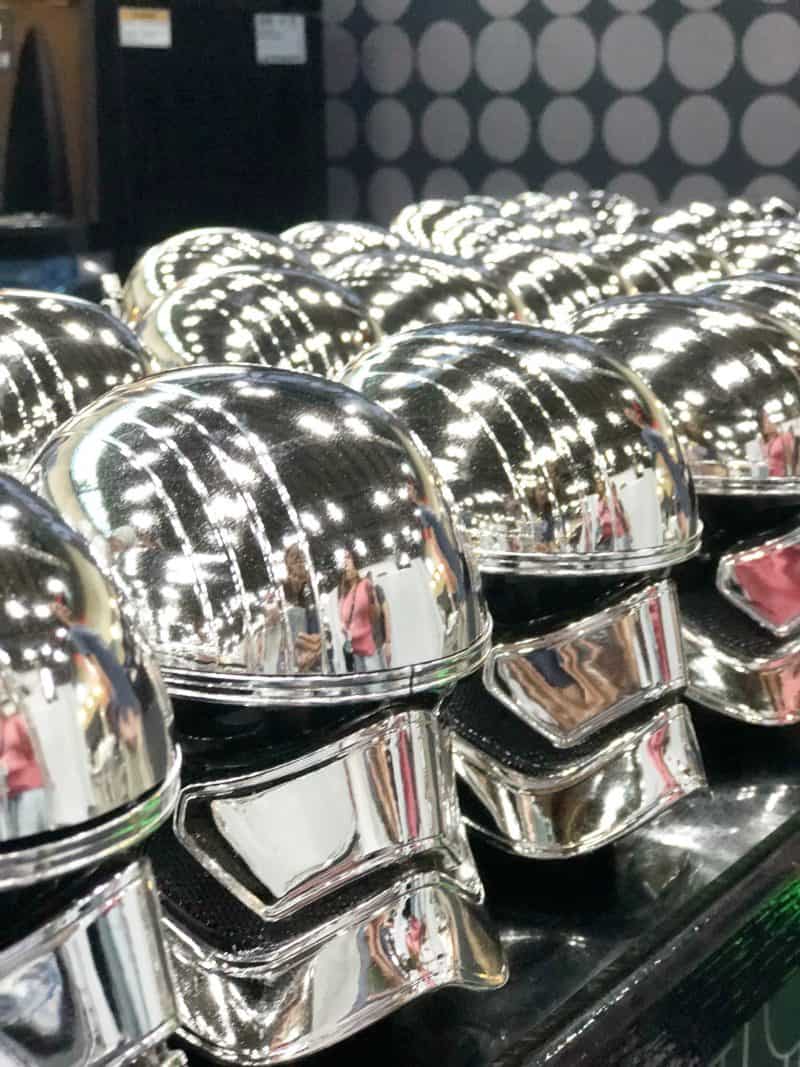 The downside of race weekends are the wake up call.  At 3AM we were donning these shirts.  Honey chose them from all of the great options at Raw Threads.    We have worn their shirts for two other Disney races, and I have more in addition to those that I just like for every day.  They are SO comfy and wash really well.  Raw Threads is usually at the Expo, but I recommend ordering in advance so you know you get what you want. 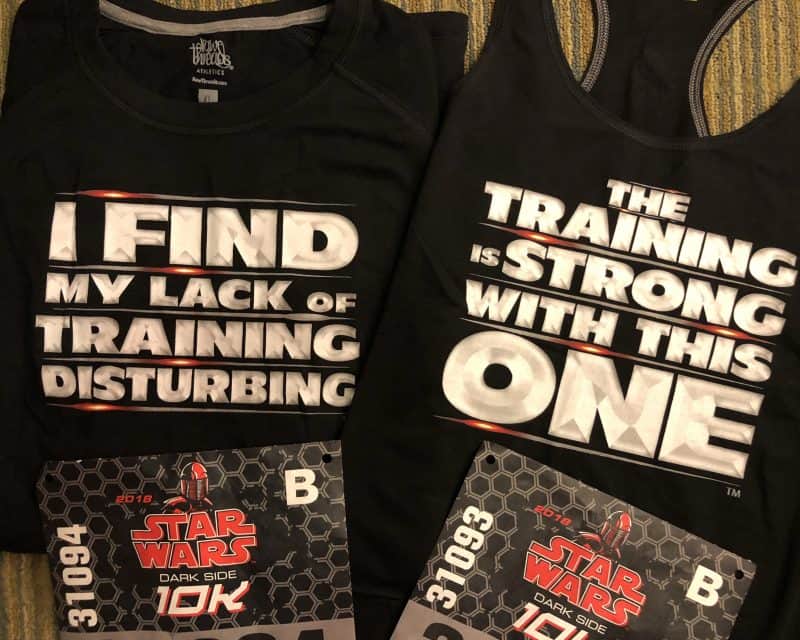 We were on a bus by 3:45 AM for our 5:30 AM start.  Yikes!  We arrived at the start area around 4:05 AM and had a whole hour to blow.  But, fear not, Disney has thought of everything.  There is always a good DJ, in addition to 3-4 different character options to see.  We met Kylo (who still hates me) and grabbed a bite to eat and drink from the food trucks.  They usually have a Joffrey’s Coffee option, as well as a stand with coffee, water, sports drinks, fruit and bars. 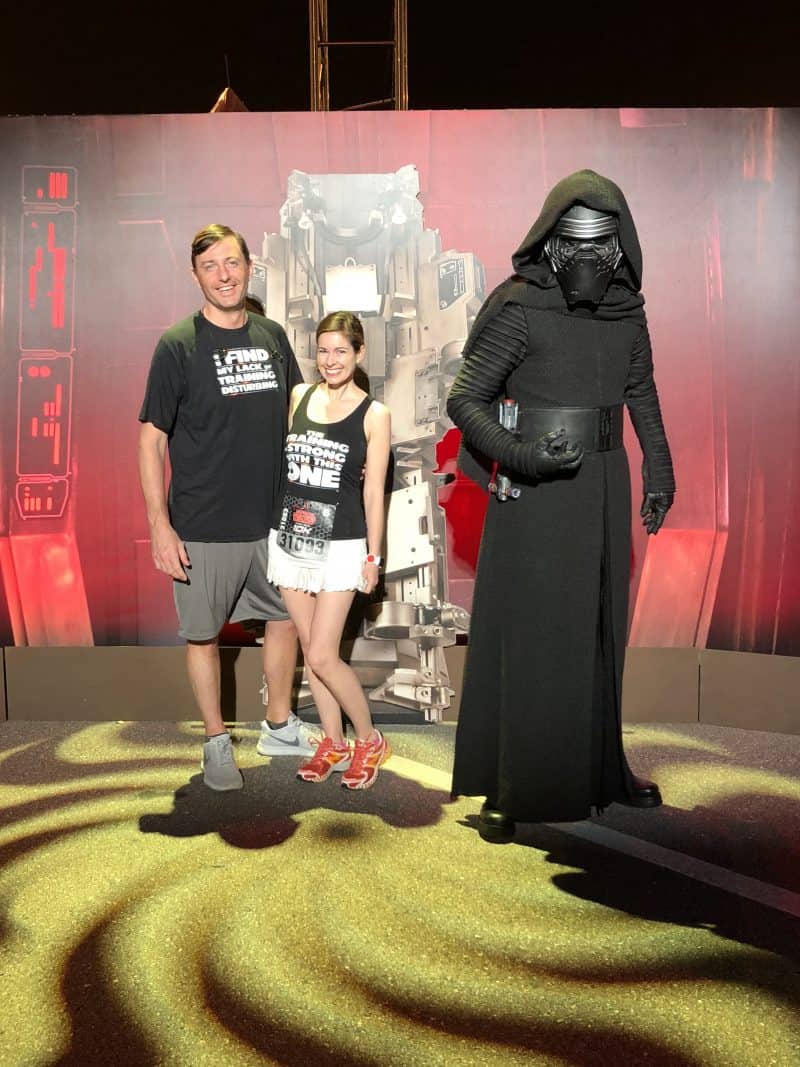 The time passed quickly and before we knew it, corral B was off!  They make a big deal of every group as it starts.  I love that they now divide the larger corrals up into mini waves.  It definitely makes the first part of the race less congested than in the past. 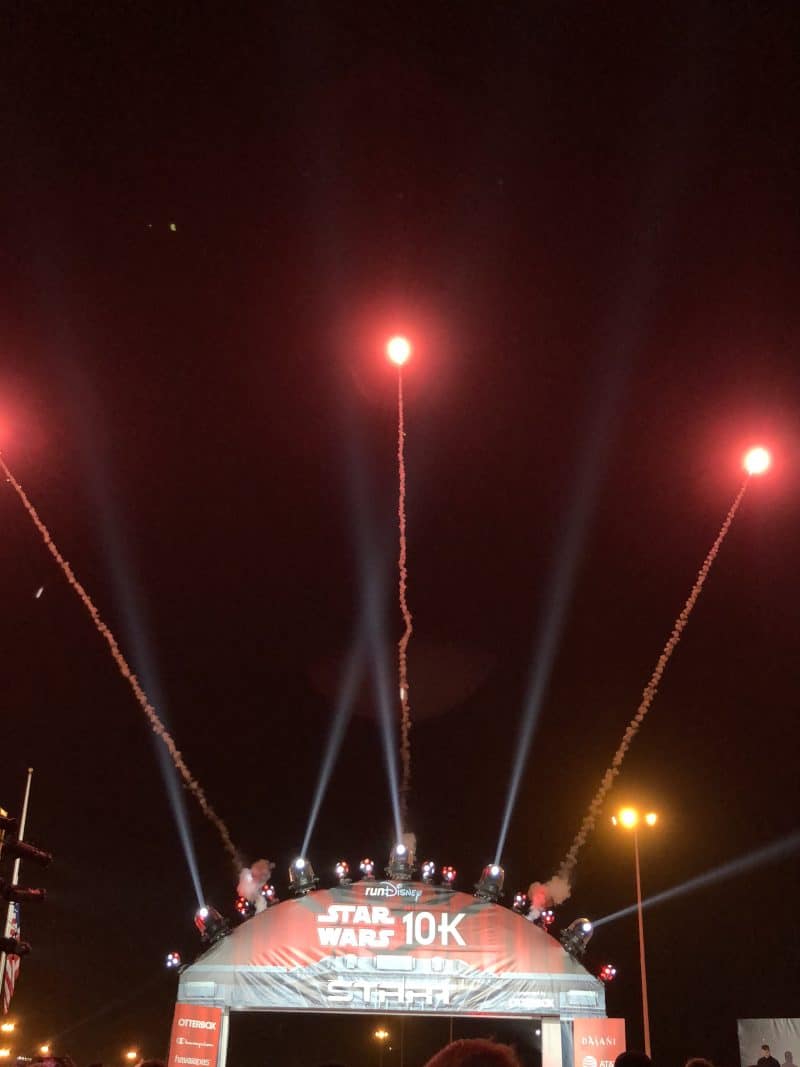 The first part of the course is all roads around the Disney resort.  It’s not all that exciting in and of itself, but they do keep things entertaining with characters, photo ops, big screens with Star Wars movie clips, music and the likes.  Not to mention, most runDisney racers are pretty friendly as well.

Now, I am a speed walker and occasional jogger and Honey is a runner.  As hard as we try, we just can’t ever agree on a pace that works for both of us.  I think the fact that he has a full foot plus some on me in stride also makes it difficult.  Alas, Disney races are PERFECT for us because there are awesome characters to be met all along the course.  Honey runs at his pace and gets in line.  I meet him there and we usually only have 3-5 minutes to wait before it’s our turn.  We snap a photo and are off on our separate ways again.  This works for him because he doesn’t train (hence the shirt).  So he kinda welcomes the break.  :-)  I don’t like more than a few minutes of a stop because it’s so hard to get moving again at a good pace. 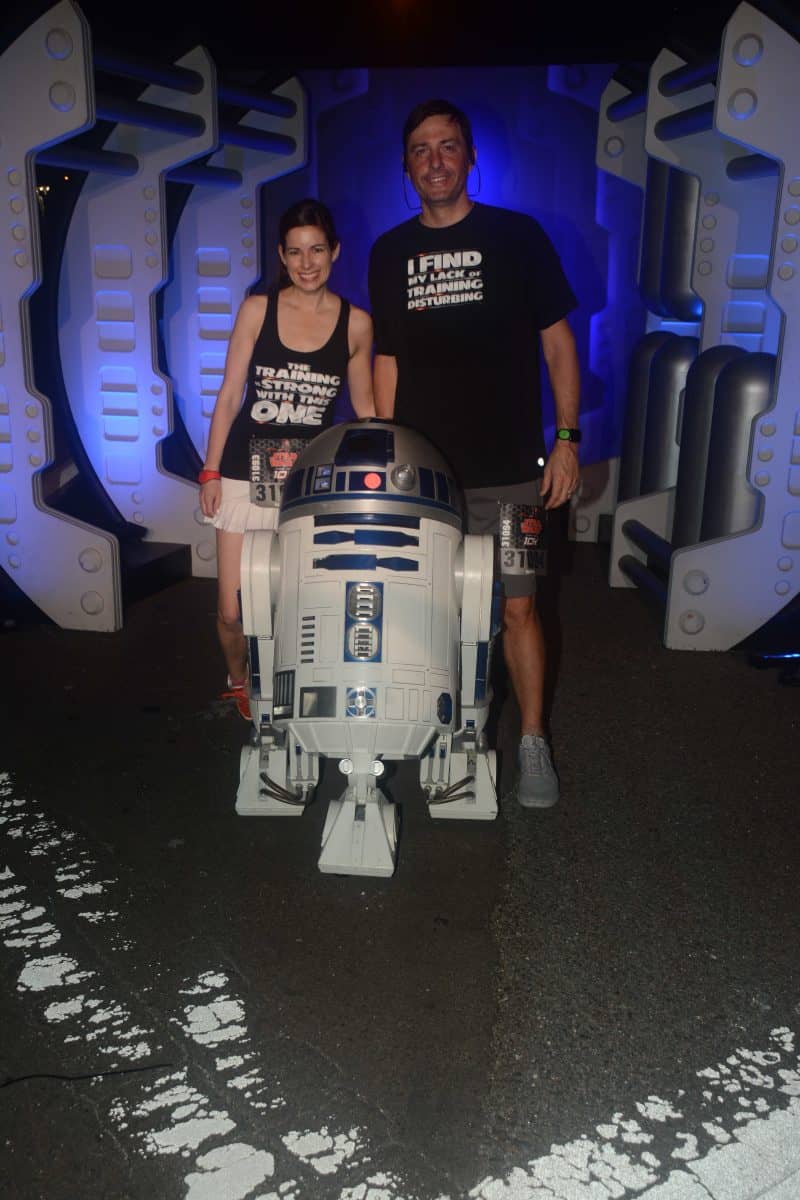 The last part of the race is my favorite!!!  We entered Hollywood Studios near Tower of Terror just as the sun was coming up.  Running through a park before opening at sunrise is just plain magical. 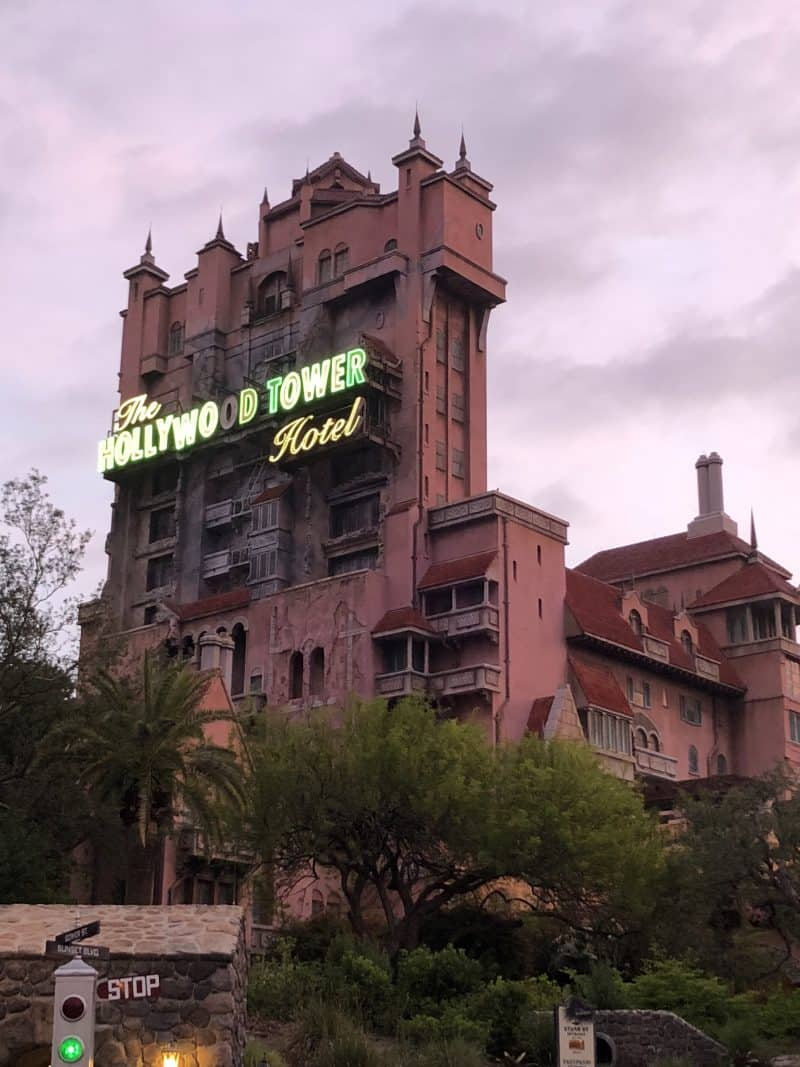 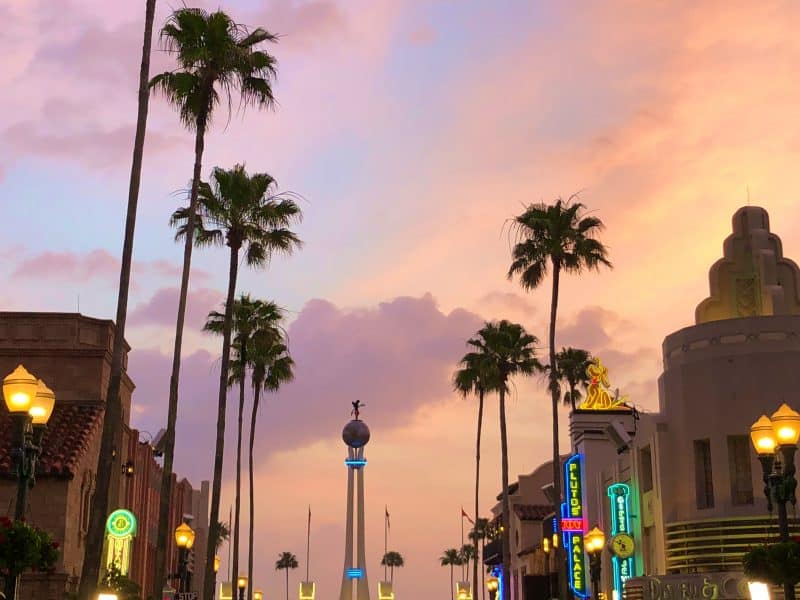 The 501st had a bunch of their members out in costume on the course as well.  This motley crew was just outside of Hollywood Studios. 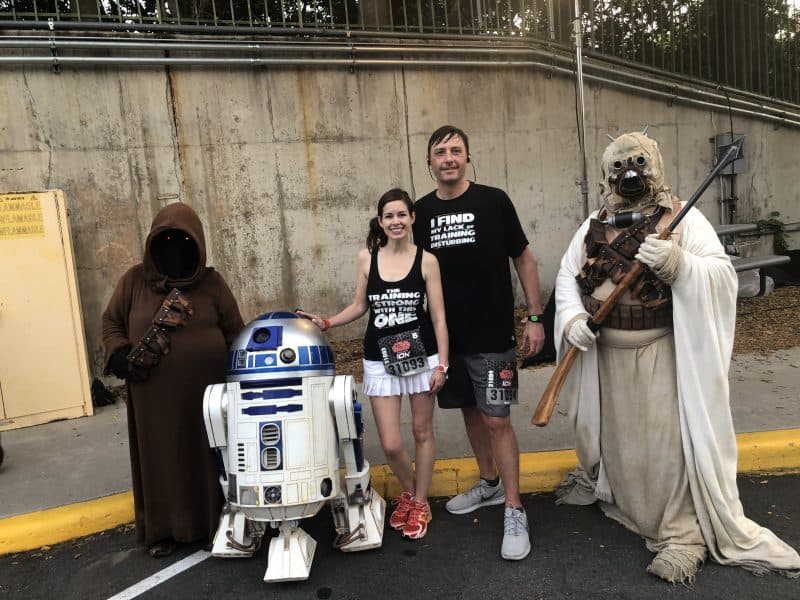 The course exits at the front of the park and then winds around the Boardwalk.  I always love this part of the race as well.  This area is never more beautiful than at sunrise and sunset.  Two times of the day that are easy to miss on a normal Disney vacation. 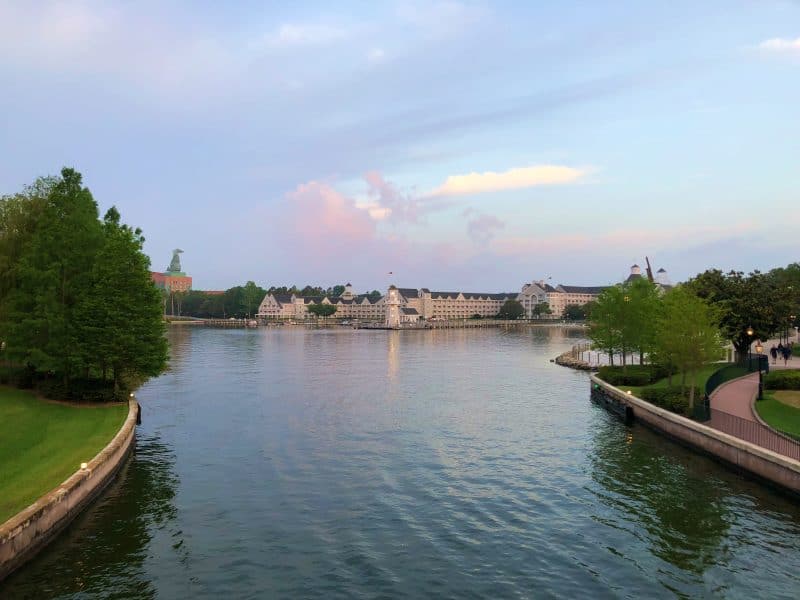 In addition to character stops, there are photographers throughout the course.  I love this one of Honey.  When you have the Memory Maker package, all of your race photos are automatically tied to your race number.  You simply link this up to your photo package and all of your pictures are included!! 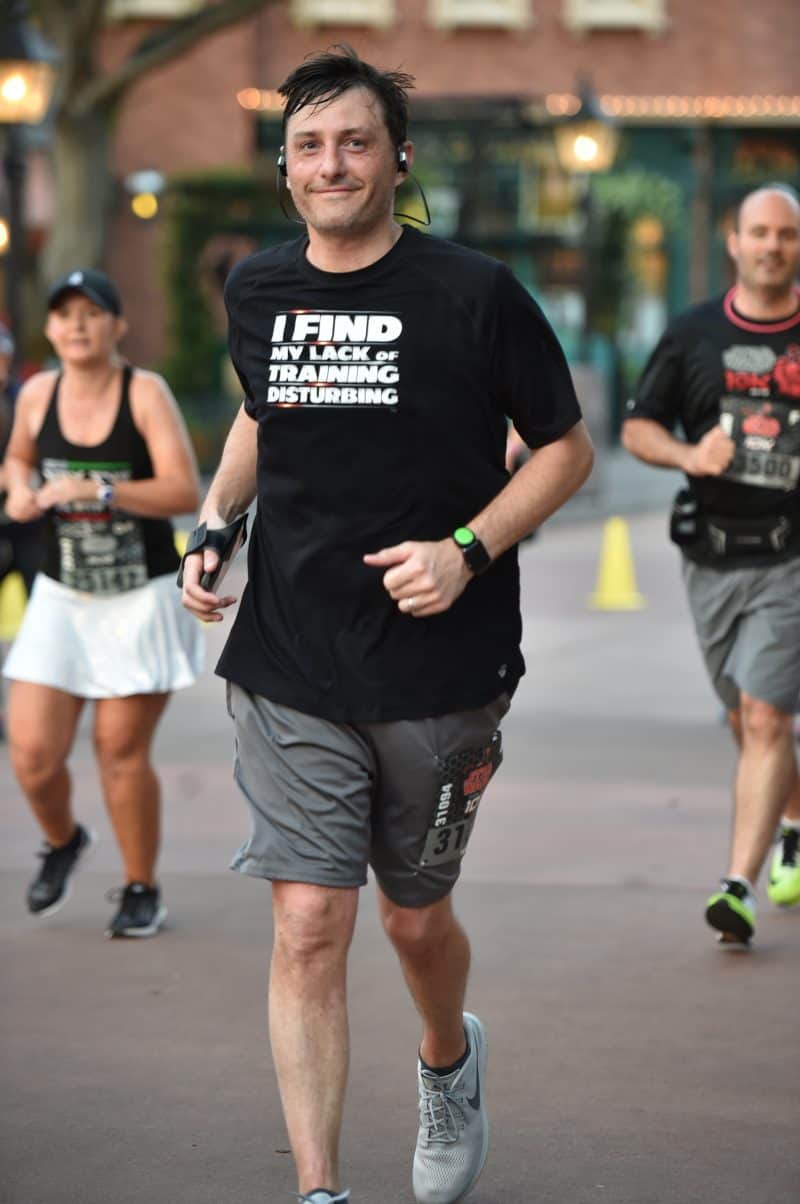 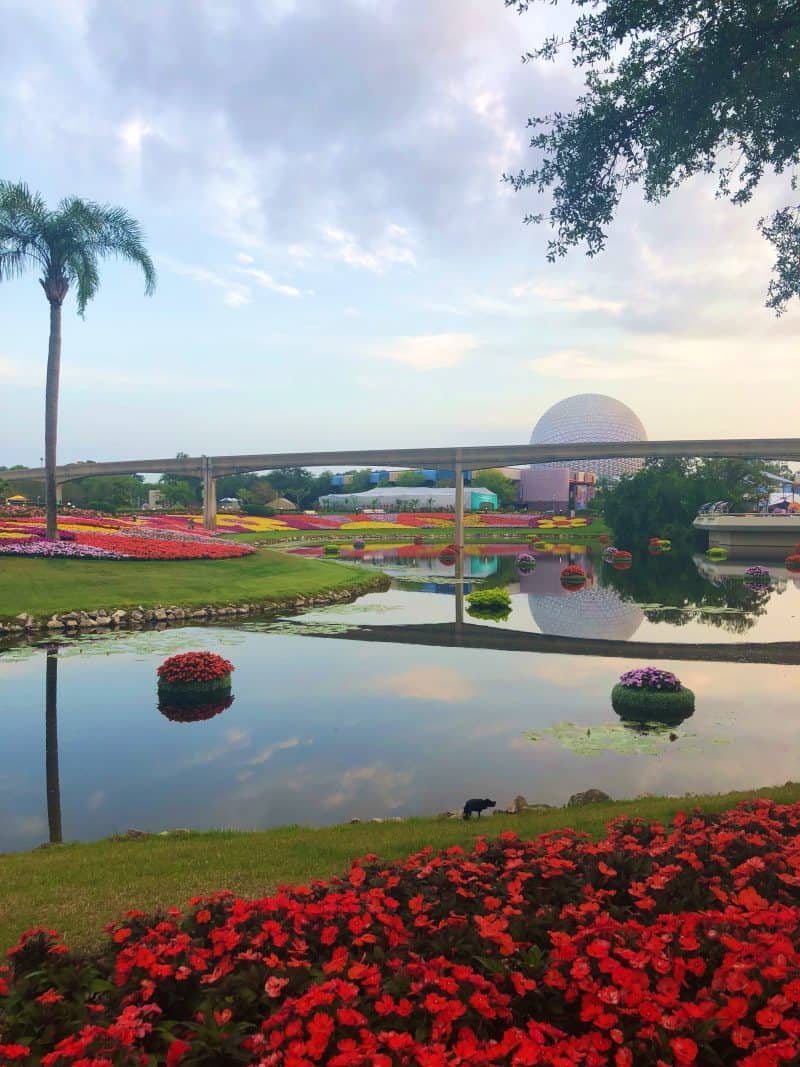 The course takes you around the World Showcase and then through Future World and out near the front gate.  With the finish line just around the corner, we met up at Figment and then stuck together from here on out! 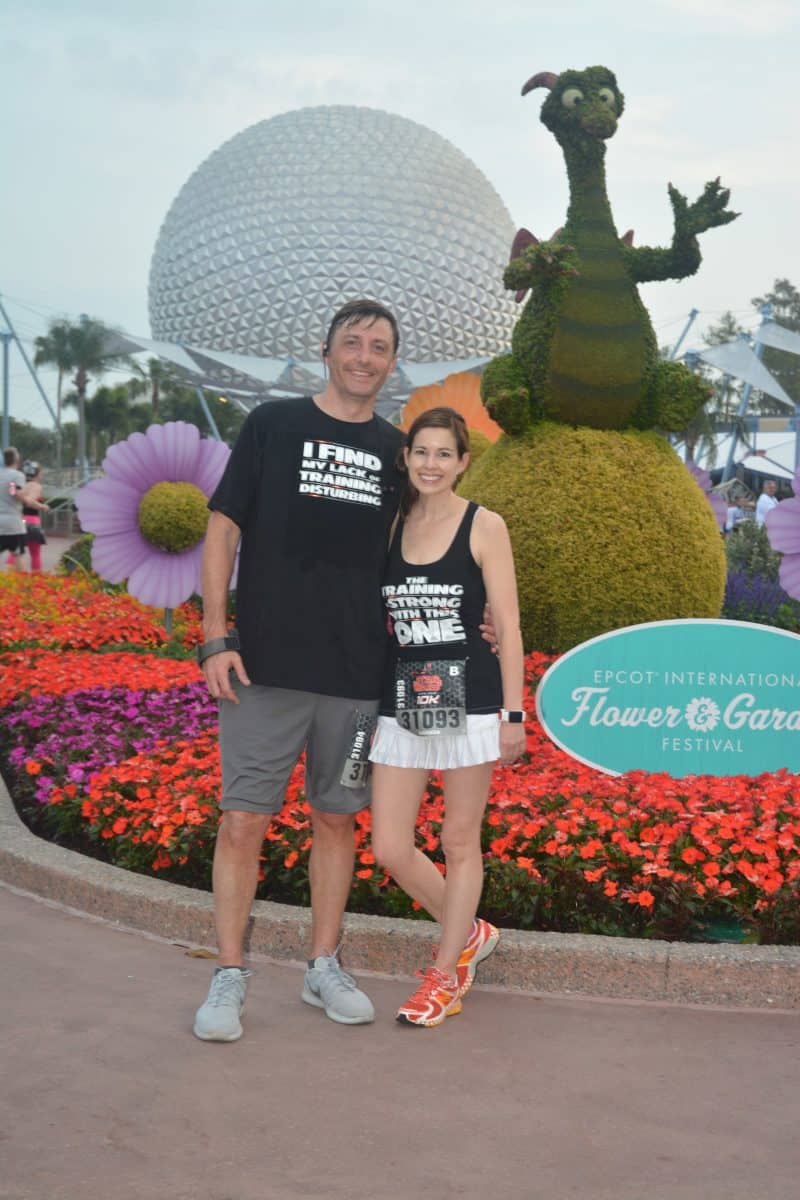 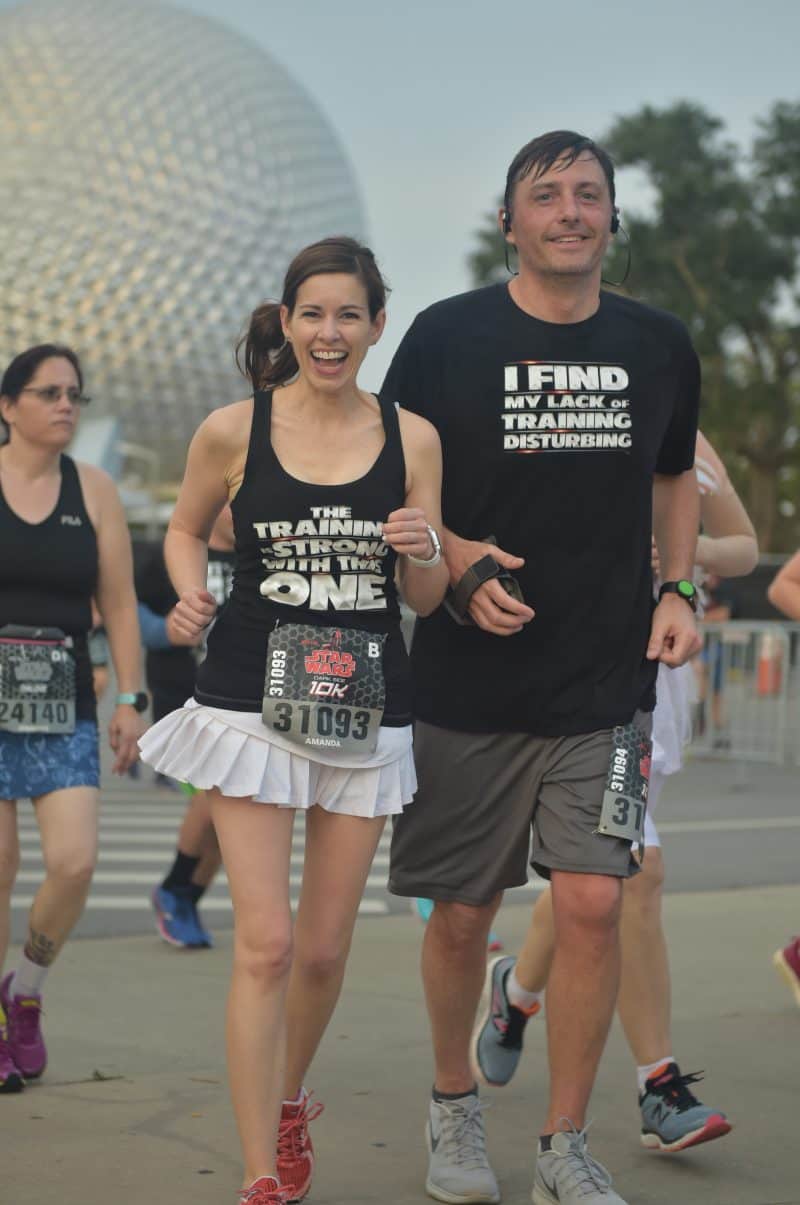 And, before we knew it, we were crossing the finish line! 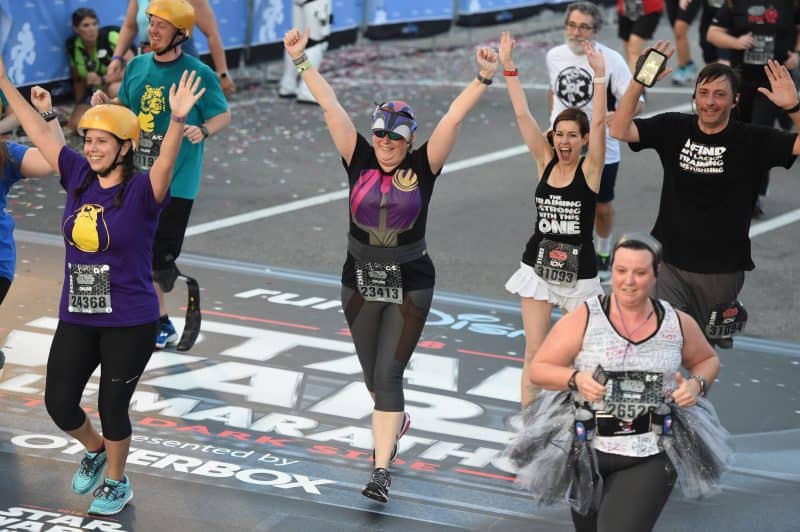 At the end of the race, there are TONS of voluntEARS lined up to hang finisher medals around your neck.  Well, I could hardly believe it when I approached one of them to get my medal and she said “ARE YOU DIXIE DELIGHTS???”  I tell you what, that made my morning!!  So sweet and special to have a blog reader give me my medal.  (Hi Rachel!!!) 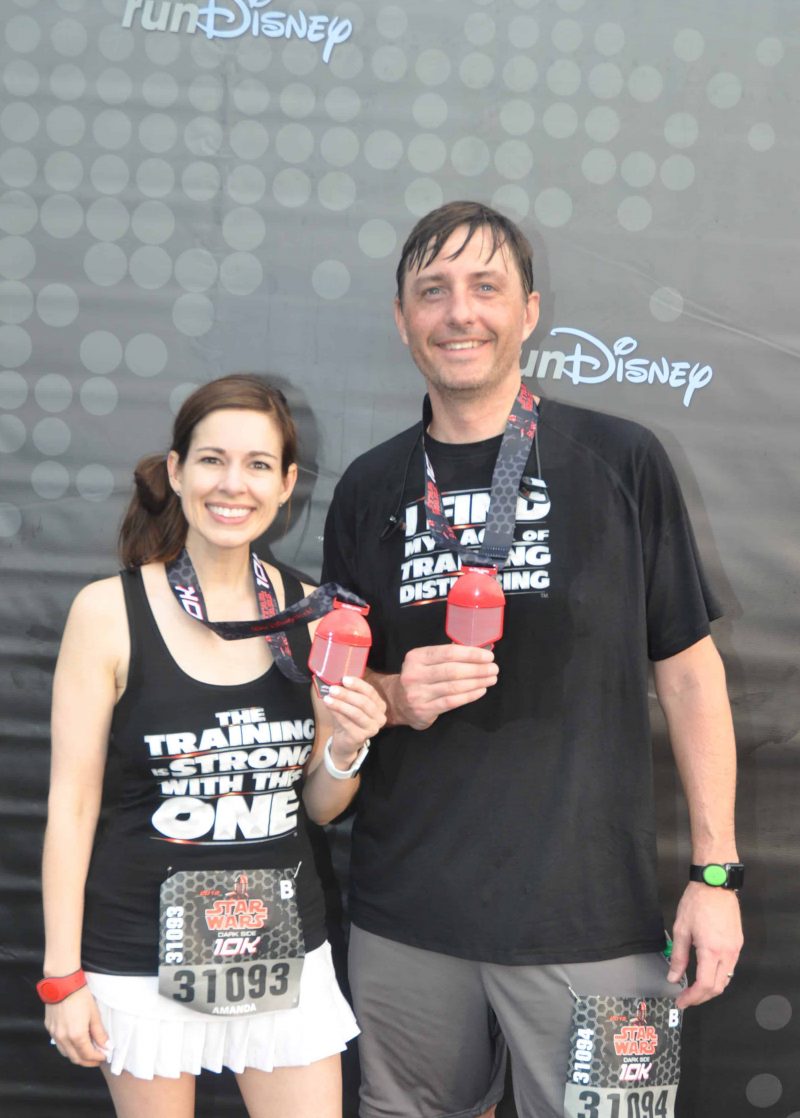 We hopped right on a bus back to Saratoga Springs Resort and made haste to breakfast! 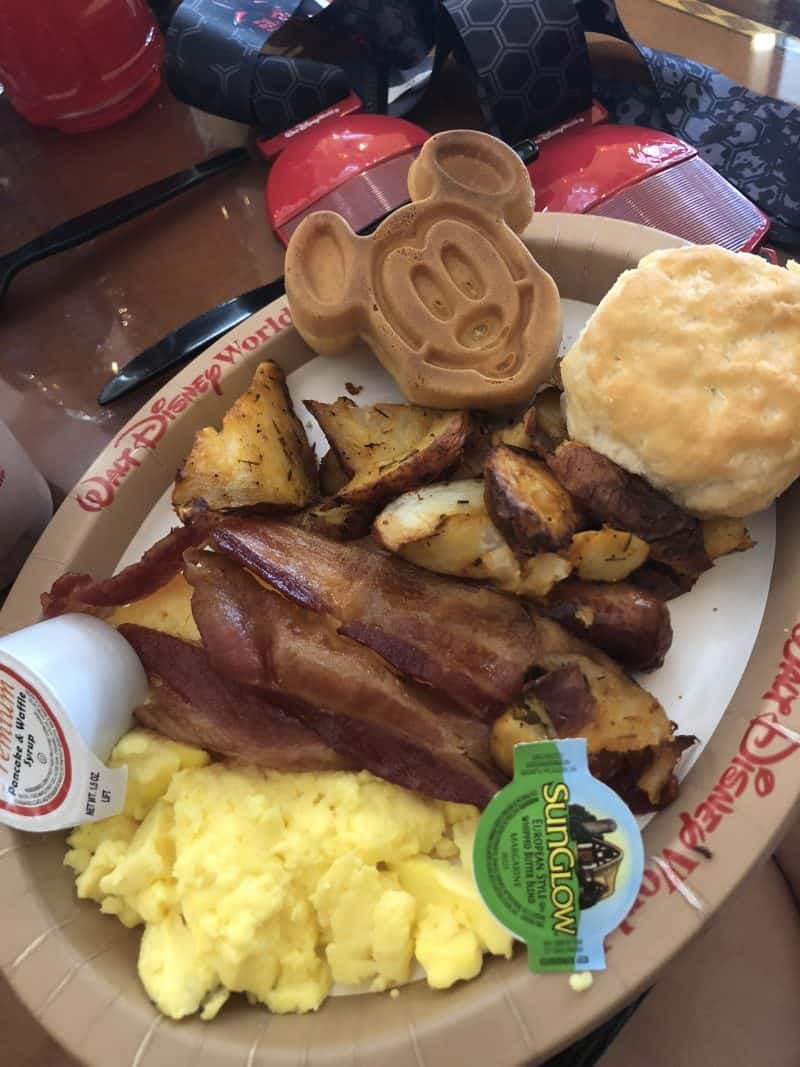 Later in the afternoon we celebrated with massages and relaxation at the Senses Spa at Saratoga Springs (more on that later).

I also thought I’d share that Saratoga Springs had a VIP Runners’ Lounge set up at the pool for the afternoon.  I have not seen this at other resorts and thought it was such a nice touch.  They had fruit, water, cold towels, yoga mats and tennis balls for stretching and, of course, the hot tub.  They had the same set up after the half marathon the next day as well. 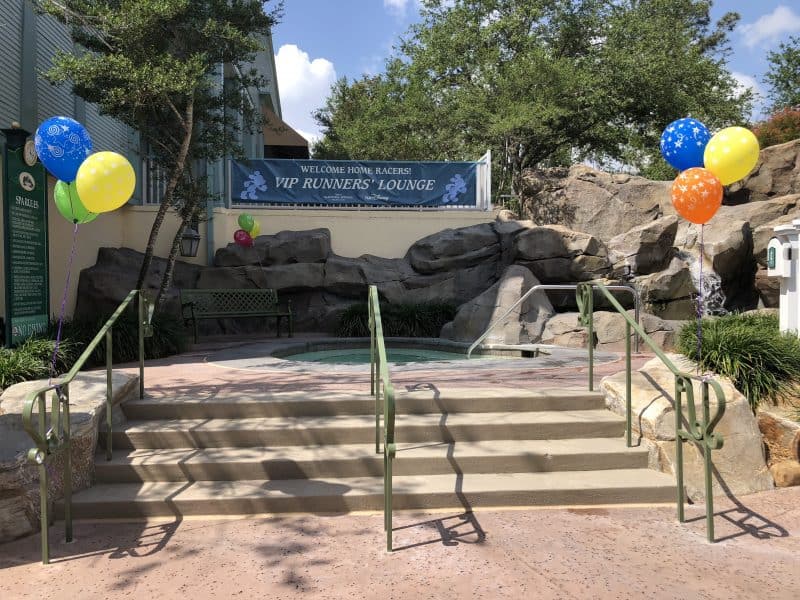 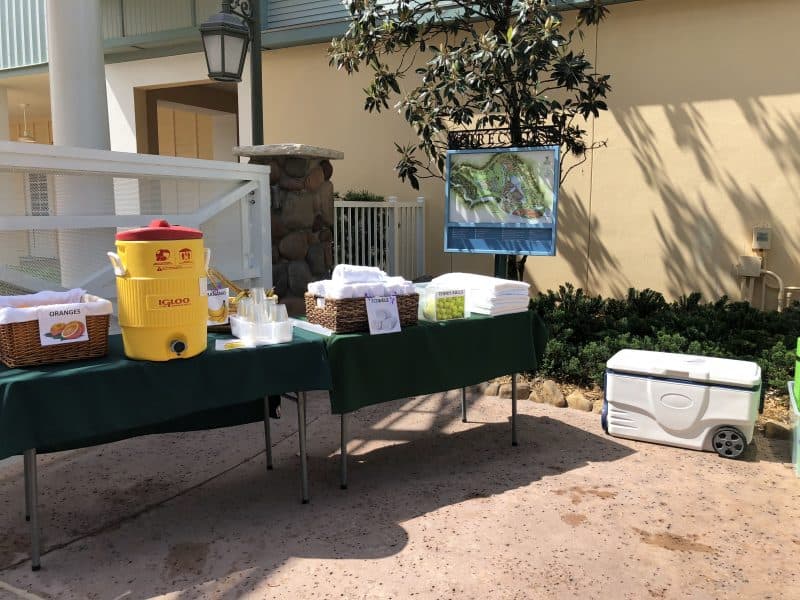 We had such a great time that we can’t wait to sign up for the next one!!!  We might even bring the boys along next year for their first Walt Disney World runDisney race since both will be 10!! 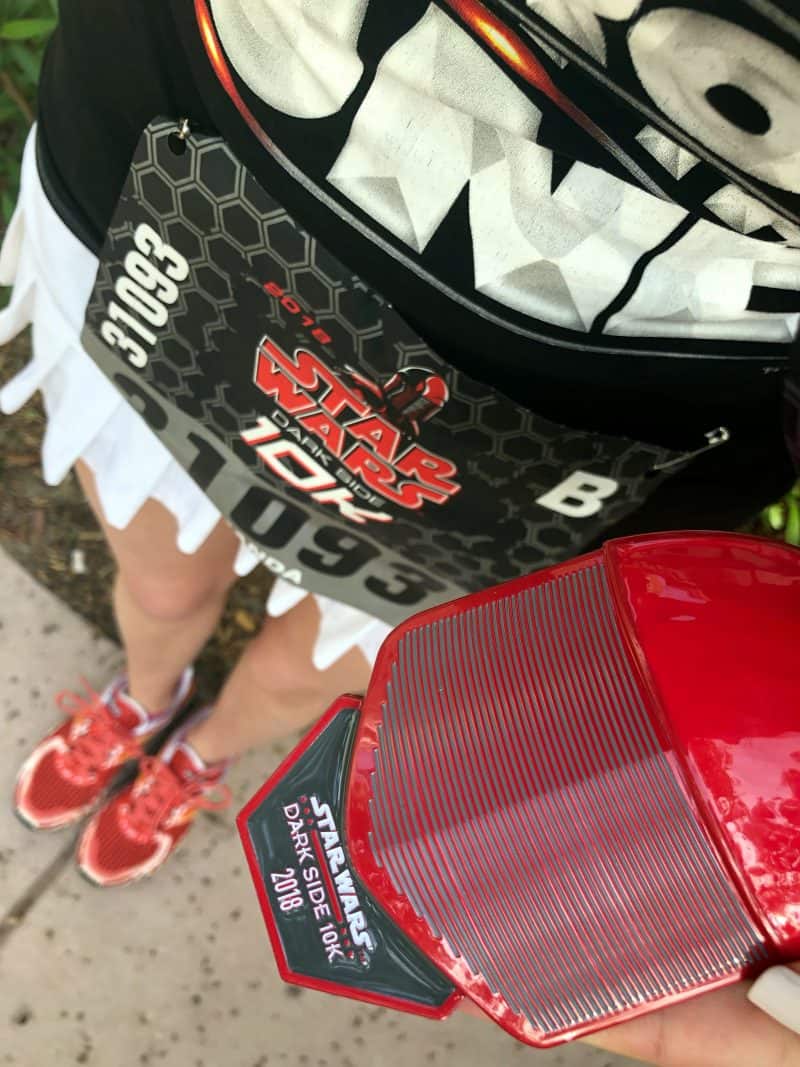 Before I go, let me tell you why I run Disney….  I signed up for my very first 5k because my childhood besties were going and it seemed like a great excuse to see them AND visit my favorite place on Earth.  When the day arrived, I had done nothing to prepare.  I was completely out of shape, carrying my extra baby weight and had to buy a pair of sneakers the week before since I didn’t even own any.  I had no idea how far 3 miles was but with the encouragement of my girls, I did it.  It was not pretty.   BUT, that first race was a turning point in my middle-aged life.  I came home motivated to return the next year and not be dying as I crossed the finish line.  I started walking every day (upon figuring out running wasn’t for me), changed my diet and went back the next year to do not just the 5k, but also the 10k.  With ease!!! I boo hoo hoo hoo hooed when I crossed that 10k finish line.  I never in my life would have thought I could do something like that!  I am now 9 or 10 races in and love always having one to look forward to keep me on my exercise and eating routine.  (for the most part)

I tell you this because I believe runDisney races are for EVERYONE.   You will see people of all ages, shapes, sizes and abilities on the course.  You must keep a 16 minute per mile pace, which is generous, but YOU CAN DO IT!!!!!!!!  (Now, keep in mind that has to include any stops for characters and such.)

I am happy to answer any questions you might have about runDisney!!   I also want to point you towards my friend and coworker Megan at Runners Guide to WDW as she is a wealth of knowledge on ALL things runDisney.

One thought on “runDisney Star Wars The Dark Side 10k”