When we visited Universal Orlando last month, we had three day park-to-park tickets and they seemed “just right” for us.  We spent two days hopping between Universal Orlando and Islands of Adventure and the third day at Volcano Bay Water Theme Park.  The number one thing we ALL wanted to do in the parks was everything Harry Potter. 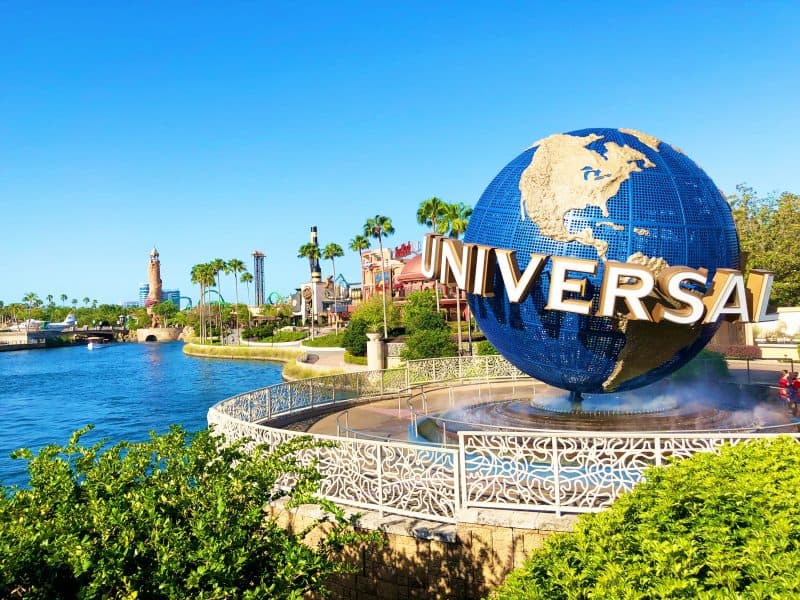 The Wizarding World of Harry Potter

The attractions for Wizarding World of Harry Potter span both parks, with Diagon Alley in Universal Orlando and Hogsmeade in Islands of Adventure.  To do everything, you will need the park-to-park ticket.  And you will want to do everything!  You will see a lot of kids and adults alike in robes and character inspired gear.  There are plenty of places to buy these things in the park, but we brought Whit’s robe from home. 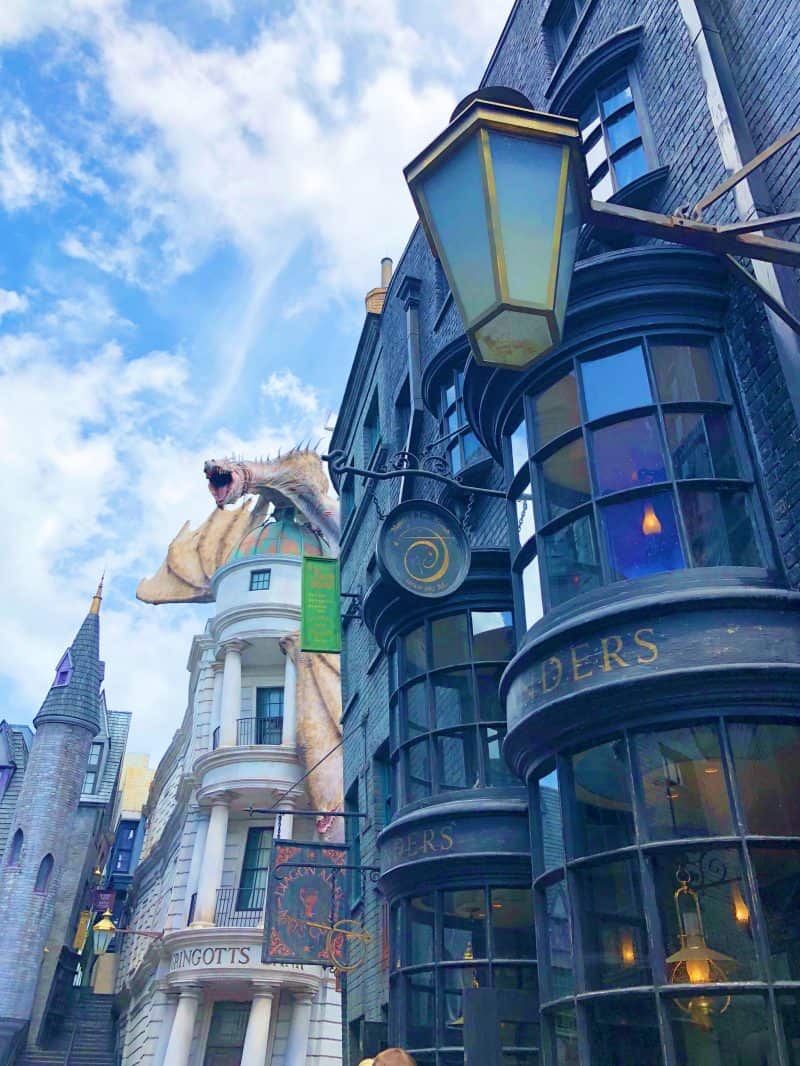 We started one of our days in Diagon Alley and the other in Hogsmeade.  We liked starting in Diagon Alley better.  It more closely follows Harry’s path in the book and you  know we are dorks like that.  We didn’t make it to the park at opening and that was perfectly fine since we had two full days.  If I were trying to do it all in one day I’d definitely be there for rope drop!

We bee-lined for Diagon Alley and the kids jaws hit the floor when we stepped into London.  We visited the Knight Bus for a few minutes.  It usually has just a few people waiting but no discernible queue.  Just walk up and interact with the talking head. 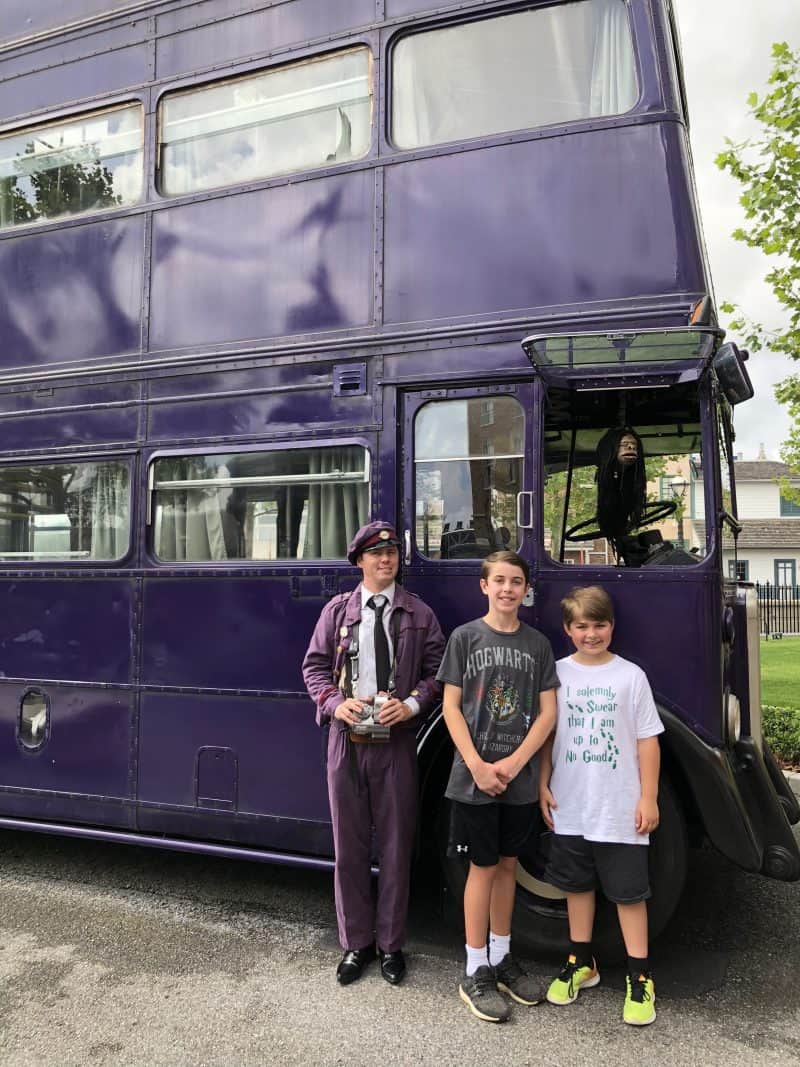 I think the biggest WOW moment of the entire thing is when you make your way through the hidden brick walls into Diagon Alley.  There aren’t any signs, that I can remember.  You just have to know where to go.  Or follow the hoards of people.  :-)  You will know she is about to breathe fire once you hear her growl. 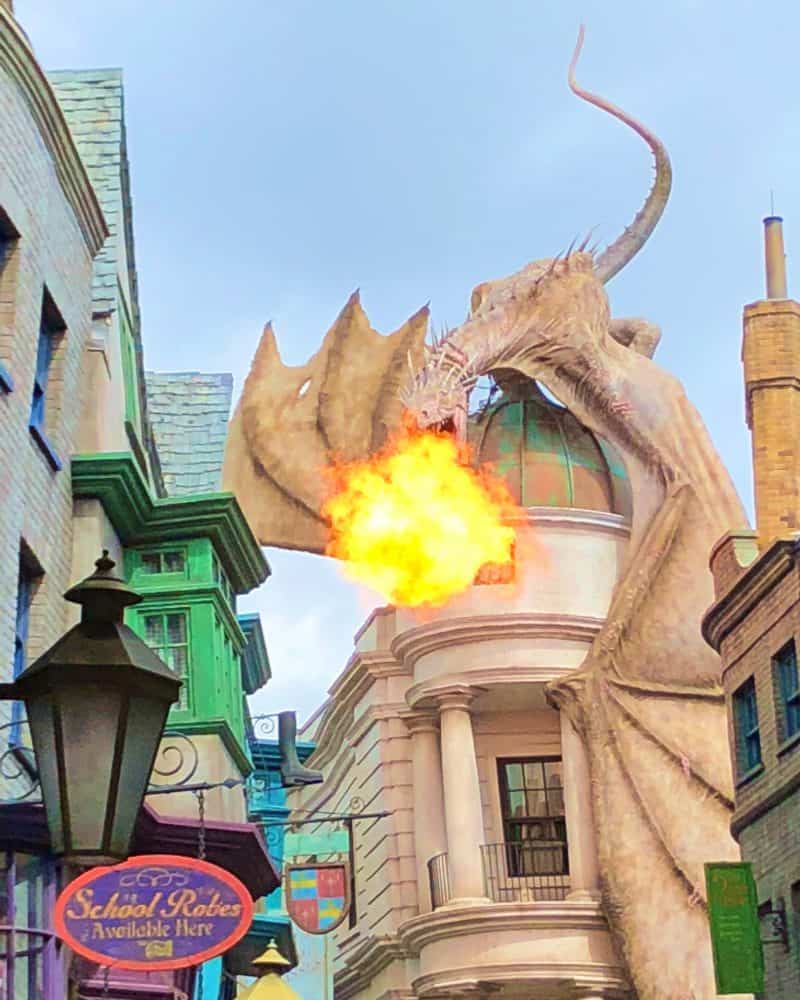 Now, I know not everyone feels the same way, but if you are a Harry Potter fanatic, DEFINITELY wait in line for the wand experience at Ollivanders.  You can purchase the wand without doing this, and even at some carts in the streets, but we absolutely loved the experience.  Ask a cast member where to line up if it isn’t evident.  You should see the line forming at the door across from the ice cream parlor.  This is a wonderful, interactive experience and all four of us loved it. 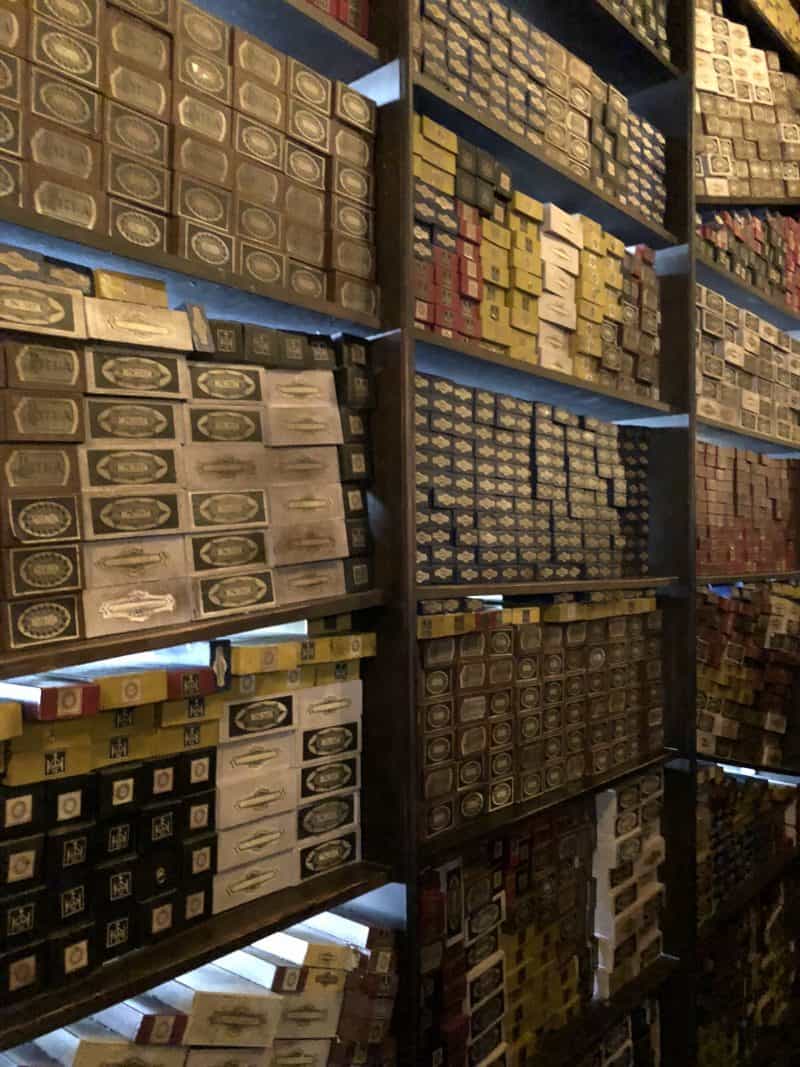 Speaking of wands, it is worth it to purchase an interactive wand here at the shop.  These special wands allow you to perform magic spells all through Hogsmeade and Diagon Alley.  They will come with a map showing the locations but they are very easy to find.  A favorite is the one that makes it rain! 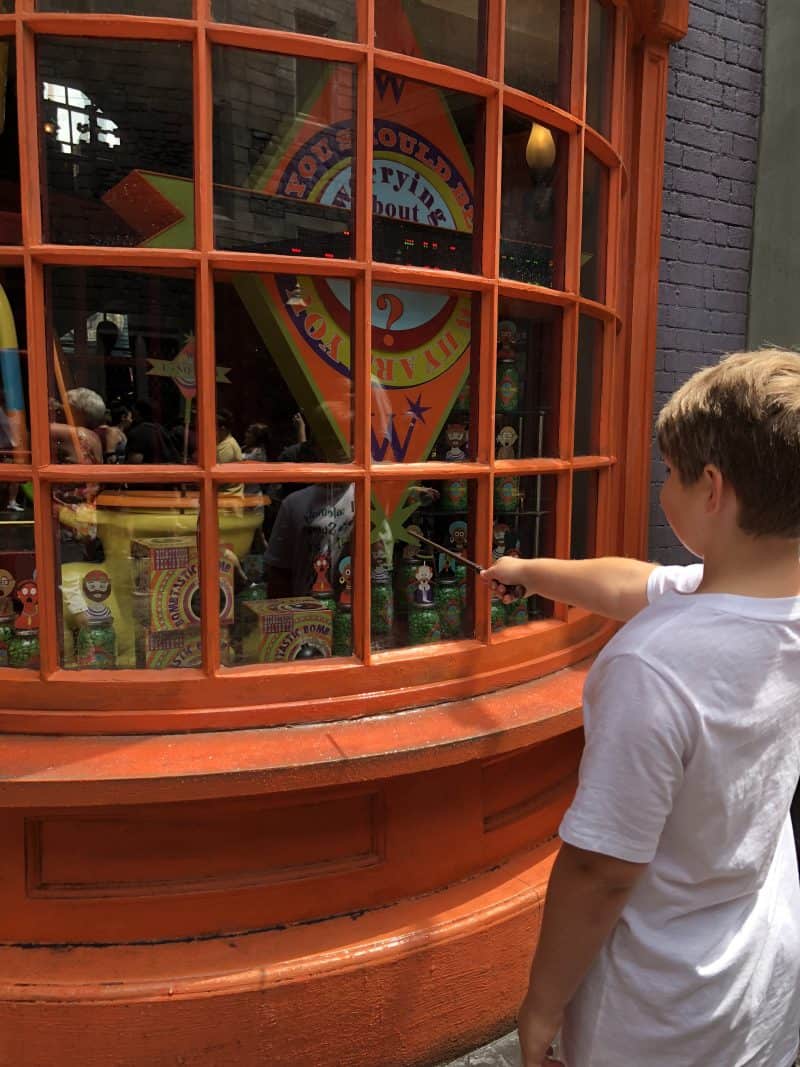 Escape from Gringotts is a fantastic ride and our collective favorite not just among the Harry Potter attractions, but for the entire park!  We rode it multiple times with the Express Pass with very little wait.  The goblins are SO realistic in the queue that we let people pass us so we could watch them longer. 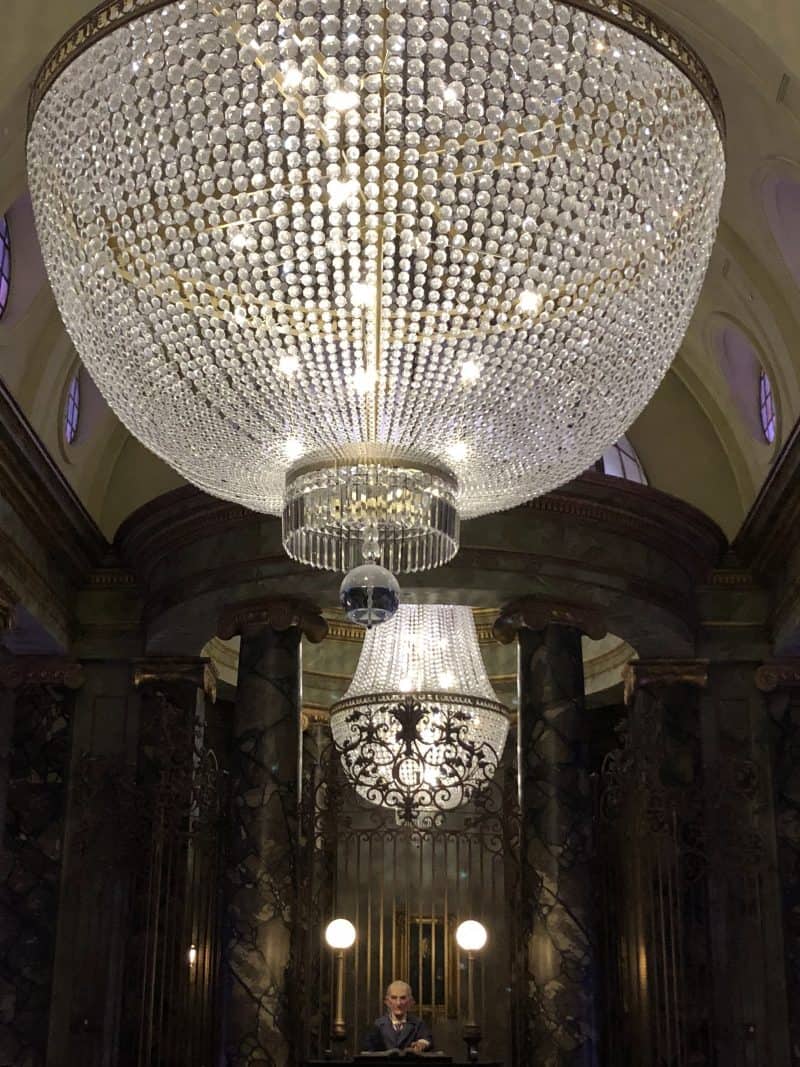 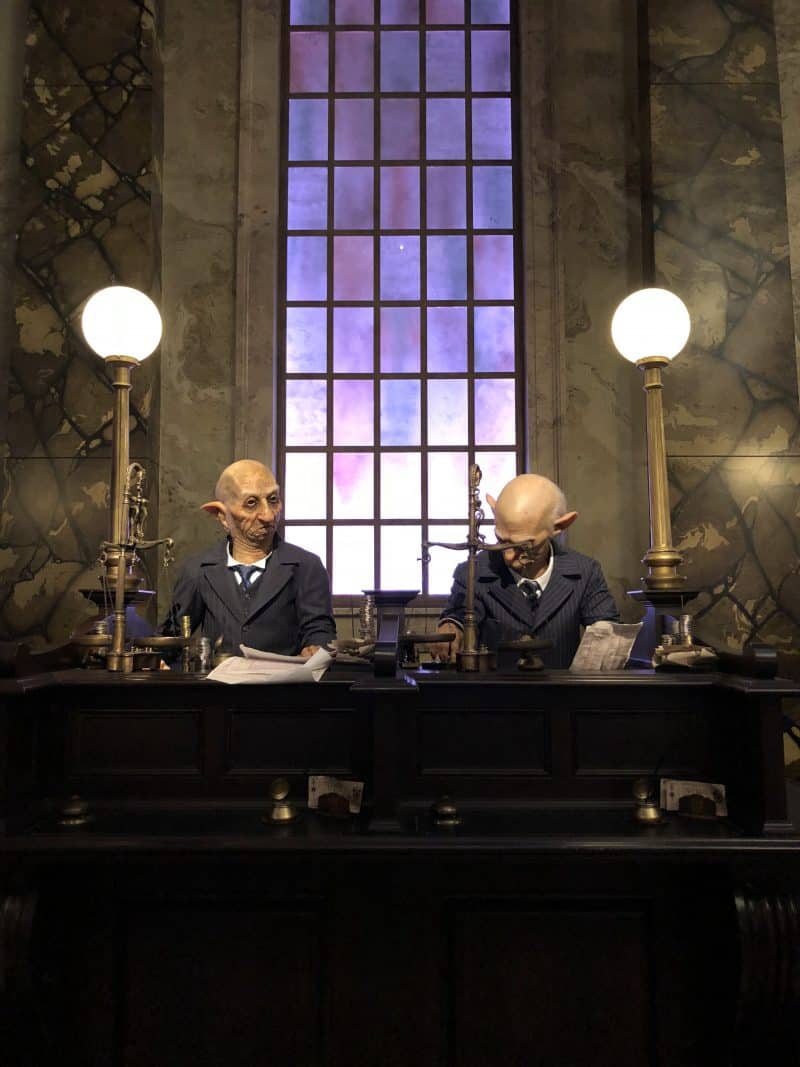 One of our favorite meals this trip was lunch at Leaky Cauldron.  We definitely preferred it over Three Broomsticks, so if you can only do one do this one.  That being said, I’d try to do both.  :-) 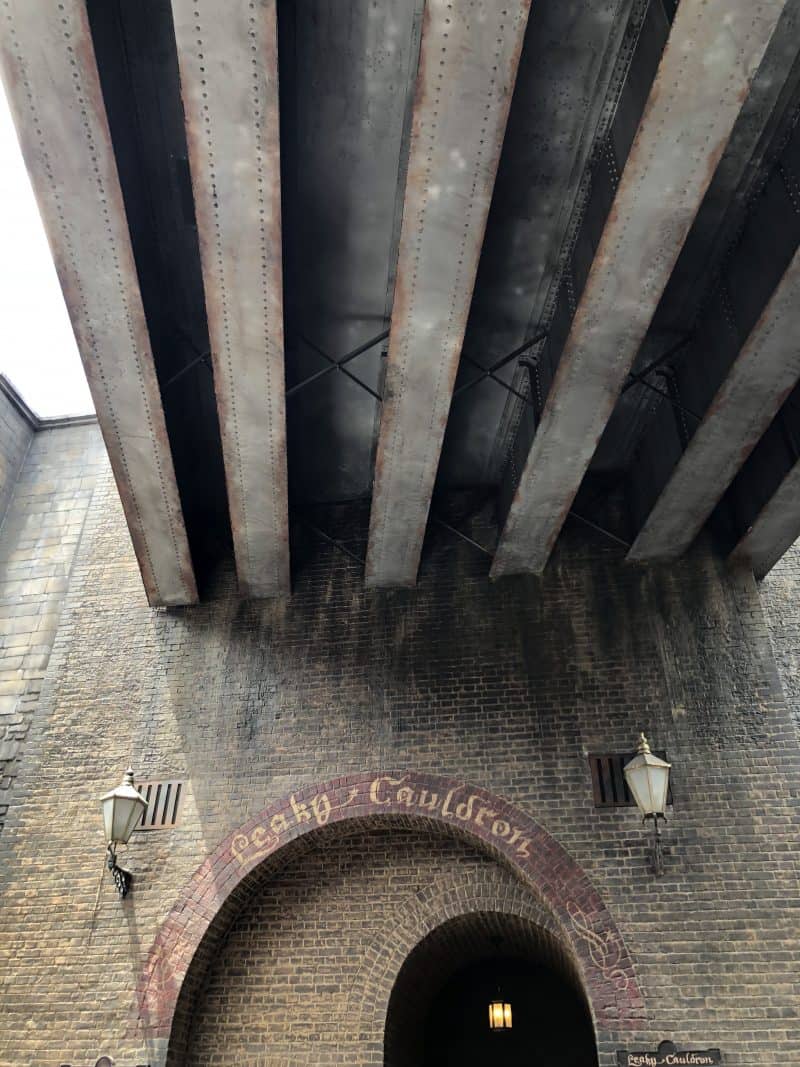 I can’t even recall what the boys got but Honey and I shared the Ploughman’s Platter and realllllly enjoyed it.   Whit and Honey had their very first butterbeers here and loved them.  John tried the orange fizzy drink and it was delicious as well.

Butterbeer can be purchased throughout the Wizarding World of Harry Potter both in the two restaurants and in carts.  We all love it best frozen, but it comes iced and warm as well.  I feel like I should clarify that butterbeer is non-alcoholic.  And it is amazing! 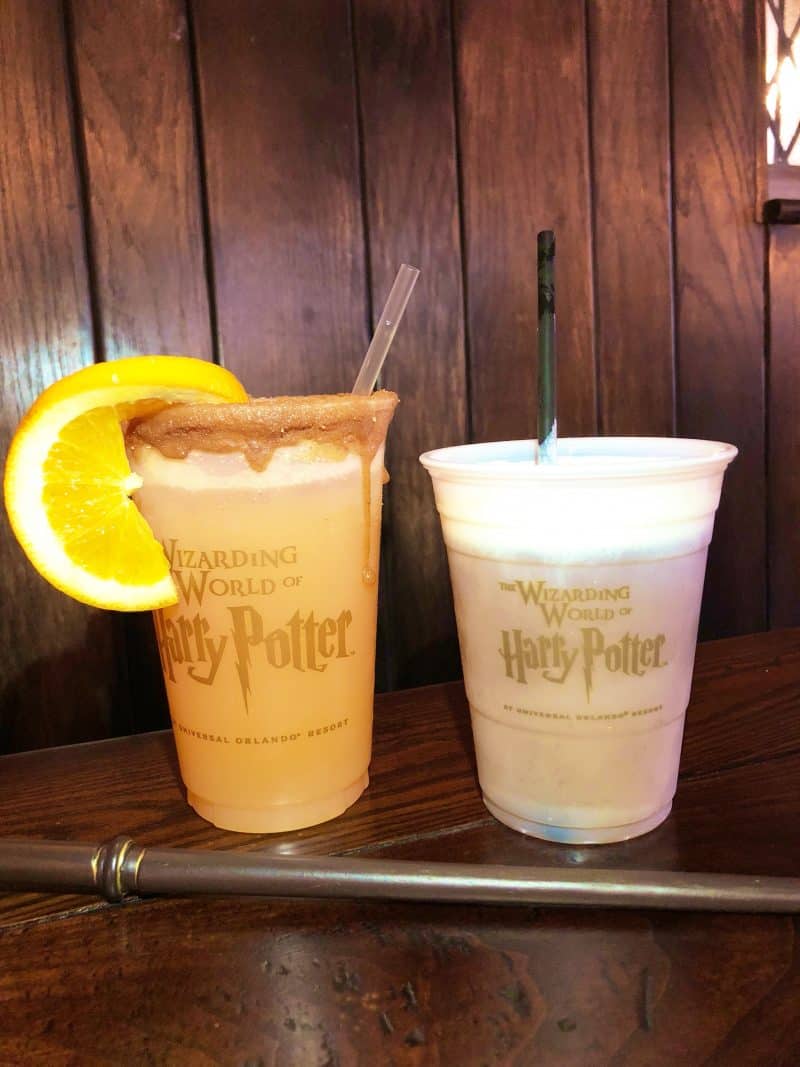 After lunch leave room for dessert at Florean Fortescue’s.  My favorite is the chocolate chili but everyone loved their choices as well. 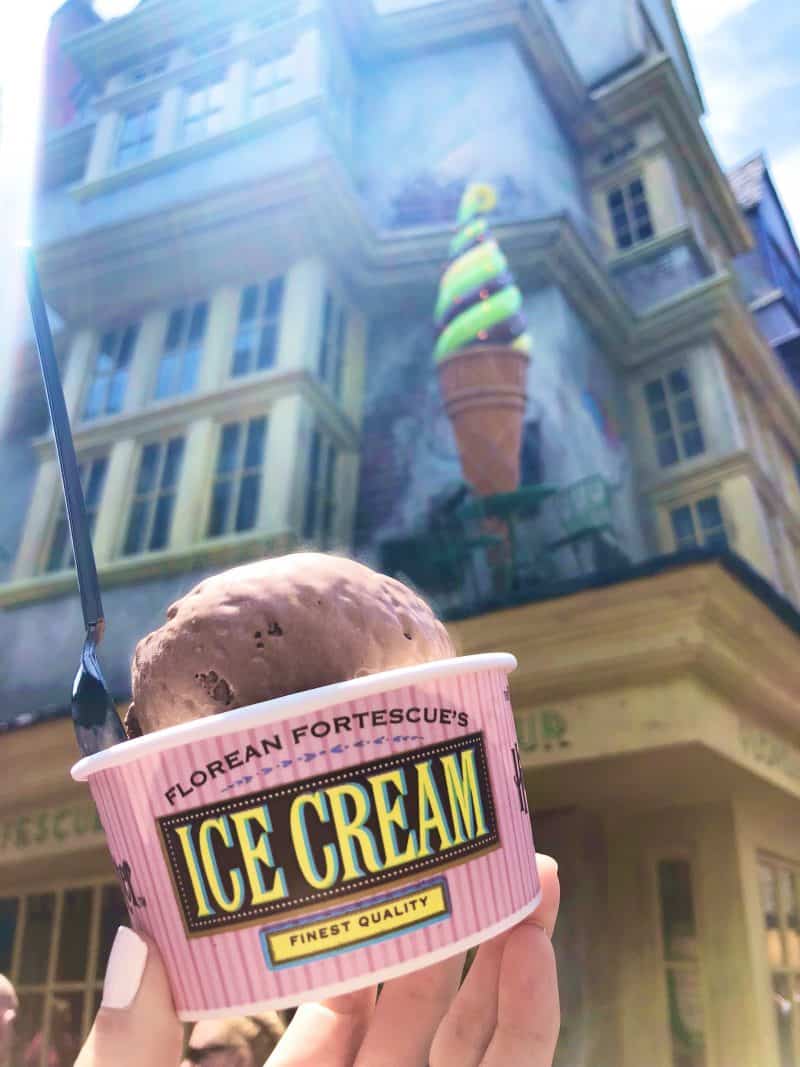 You will definitely want to pop in Weasleys’ Wizard Wheezes.  It is full of things the Weasley’s would love (gags, games, candy, etc.) and a fun little shop especially for boys. 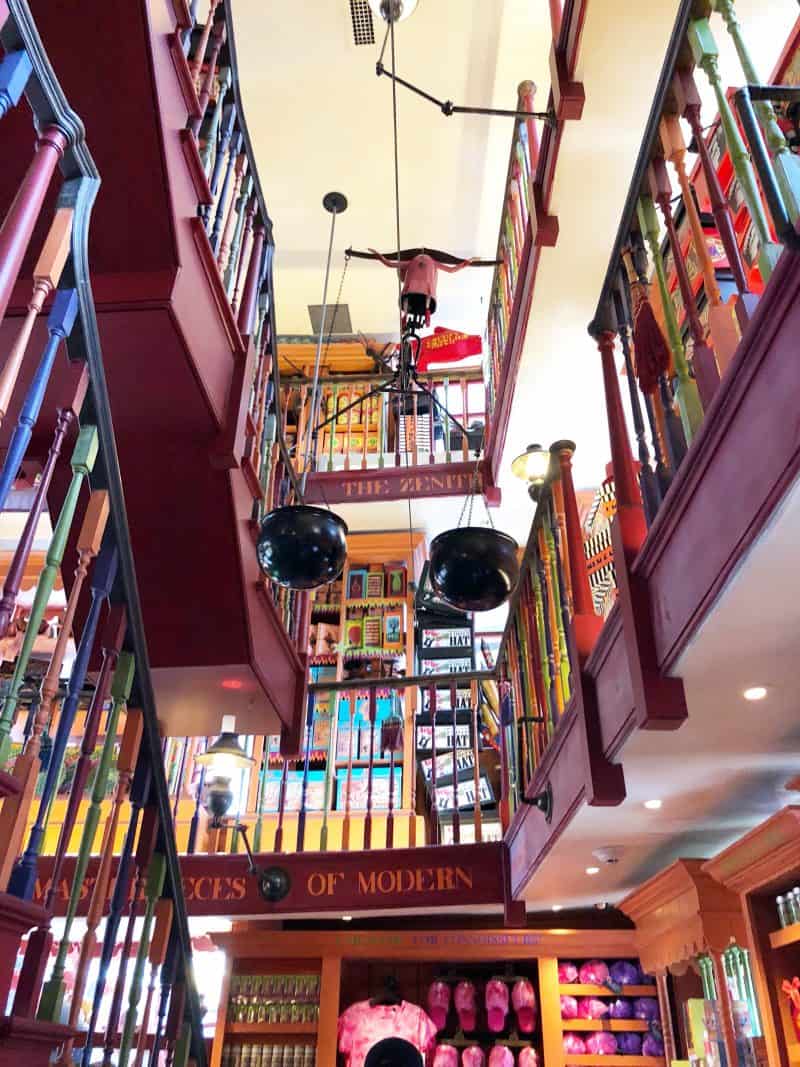 On you way back to the Kings Cross Station, be sure to pop in the phone booth and dial the number on the phone.  :-) 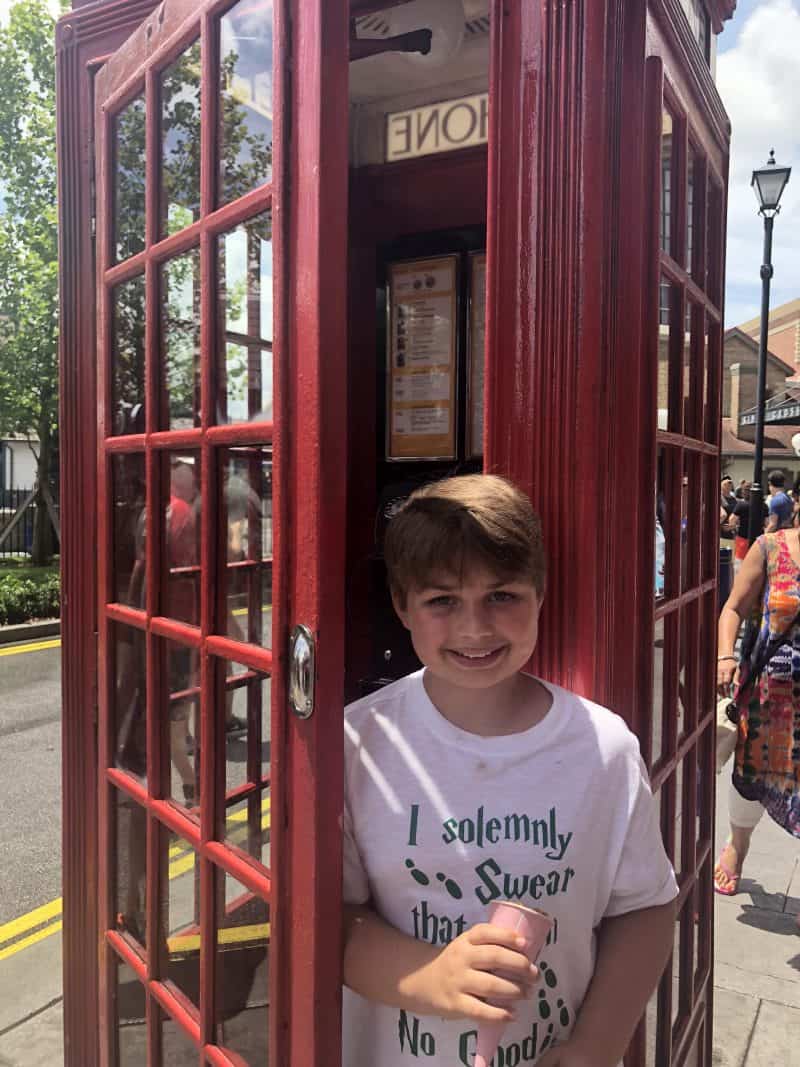 You will need to have the park-to-park ticket in order to ride the Hogwarts Express.  And it is really a must do!  You board in Diagon Alley at the Kings Cross Station and head to Platform 9 3/4.  Be sure to hang back near this owl and let you family go ahead.  You will see them disappear into the wall!  It’s incredible.  You can see video of it on my Dixie Travels Instagram Page in the Universal Stories.   Note that the train experience is different in each direction so it is worth riding back the other way. 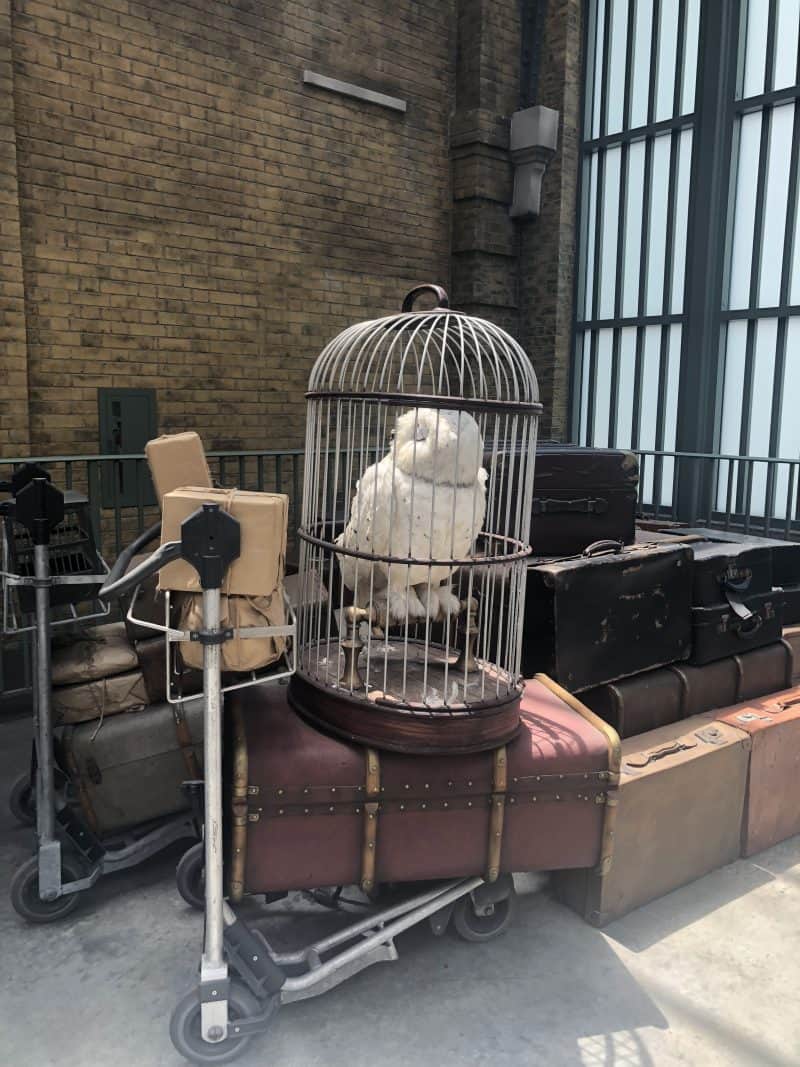 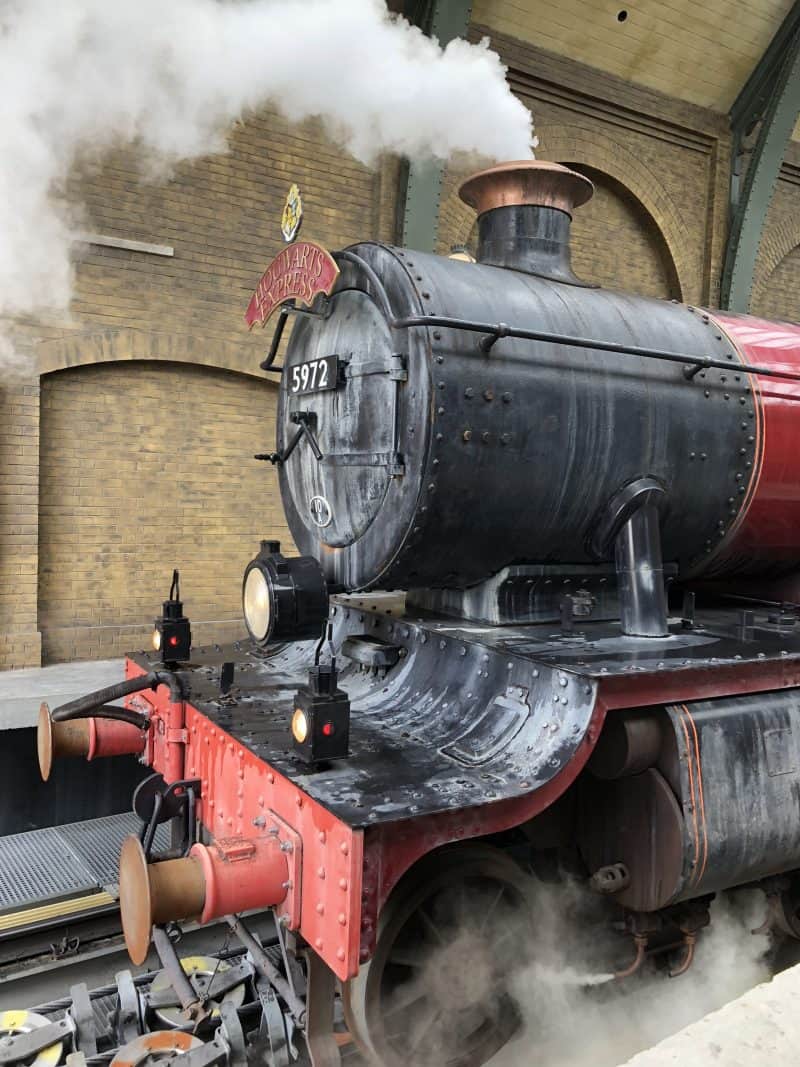 Hogsmeade in Islands of Adventure

The train has you disembark at the Hogsmeade Station where the Harry Potter adventure continues! 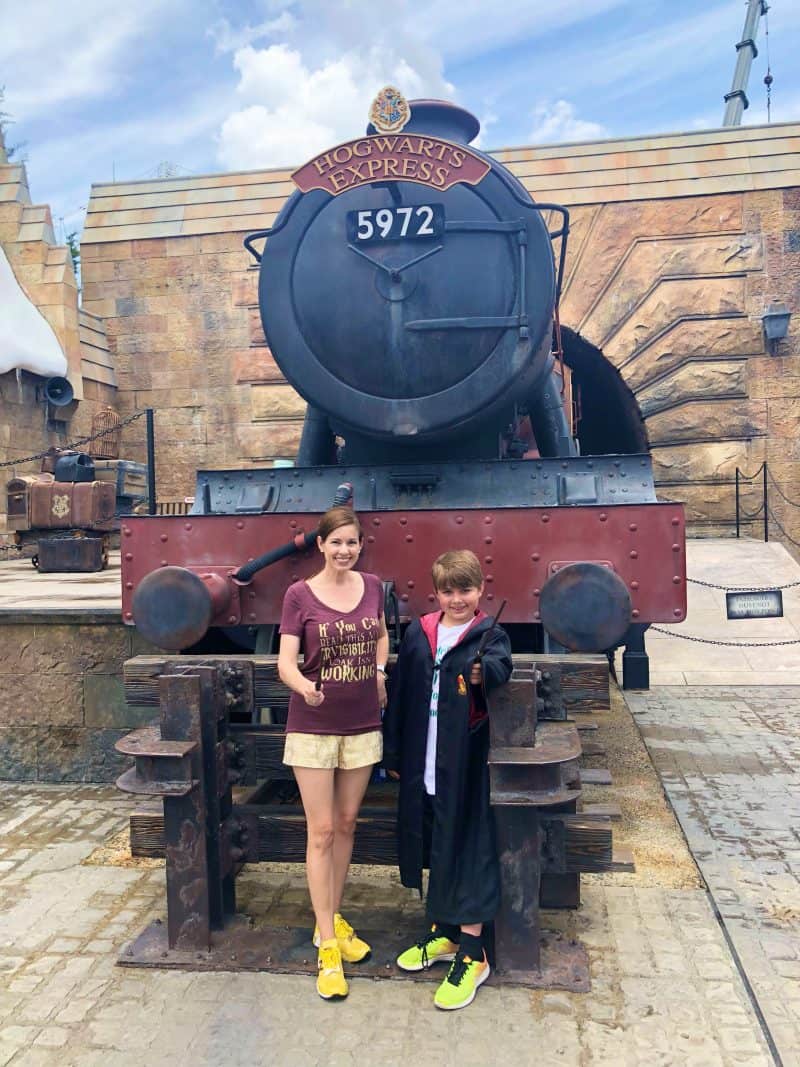 Like Diagon Alley, Hogsmeade is just like stepping into the book.  I marveled over the quirky roof lines and crooked chimney’s. 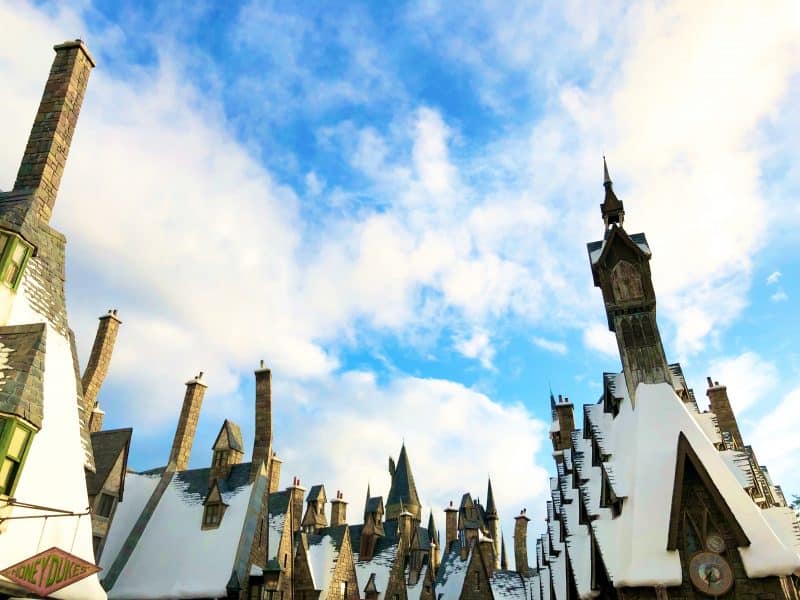 The key attraction in this section is Harry Potter and the Forbidden Journey.  It is located in Hogwarts castle at the far end of Hogsmeade. 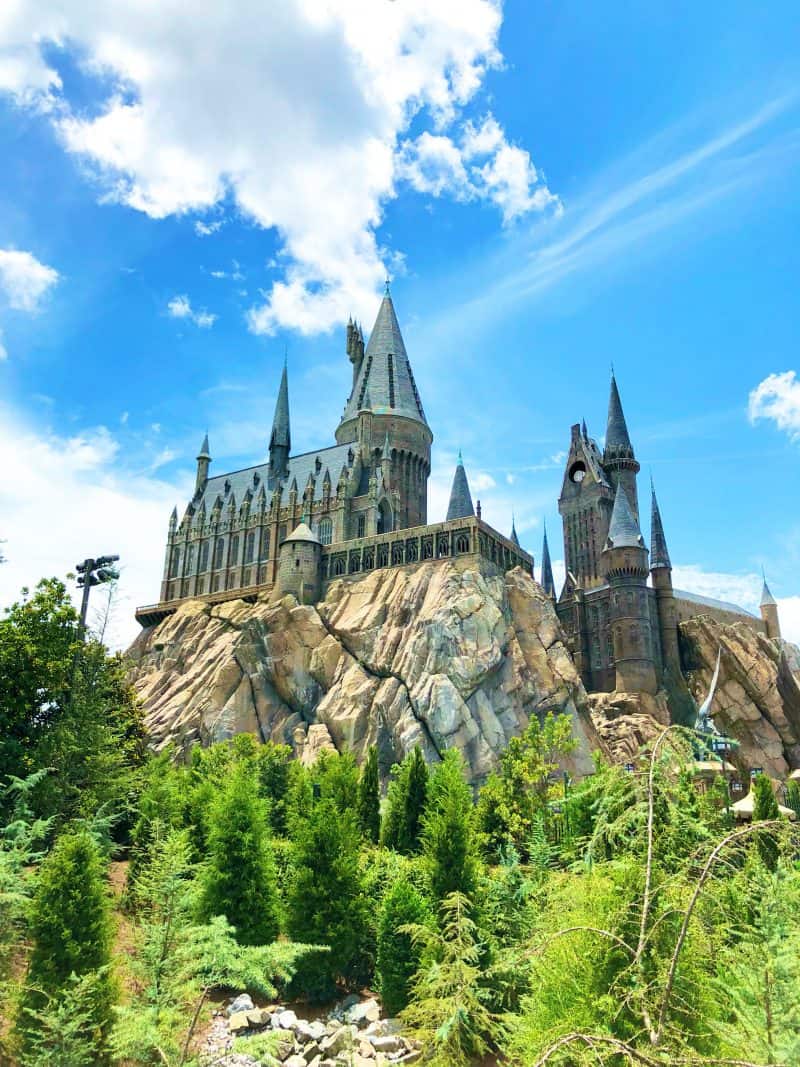 We did the ride both with Express Pass and in the stand-by line to fully experience the queue.  After evaluating both, I think doing Express Pass is fine.  You still hit the highlights of the castle.  By the way, this queue is the best of any I’ve seen.  It takes you through so many parts of Hogwarts!  The ride itself is a little intense with the screens and movement but definitely worth doing at least once. 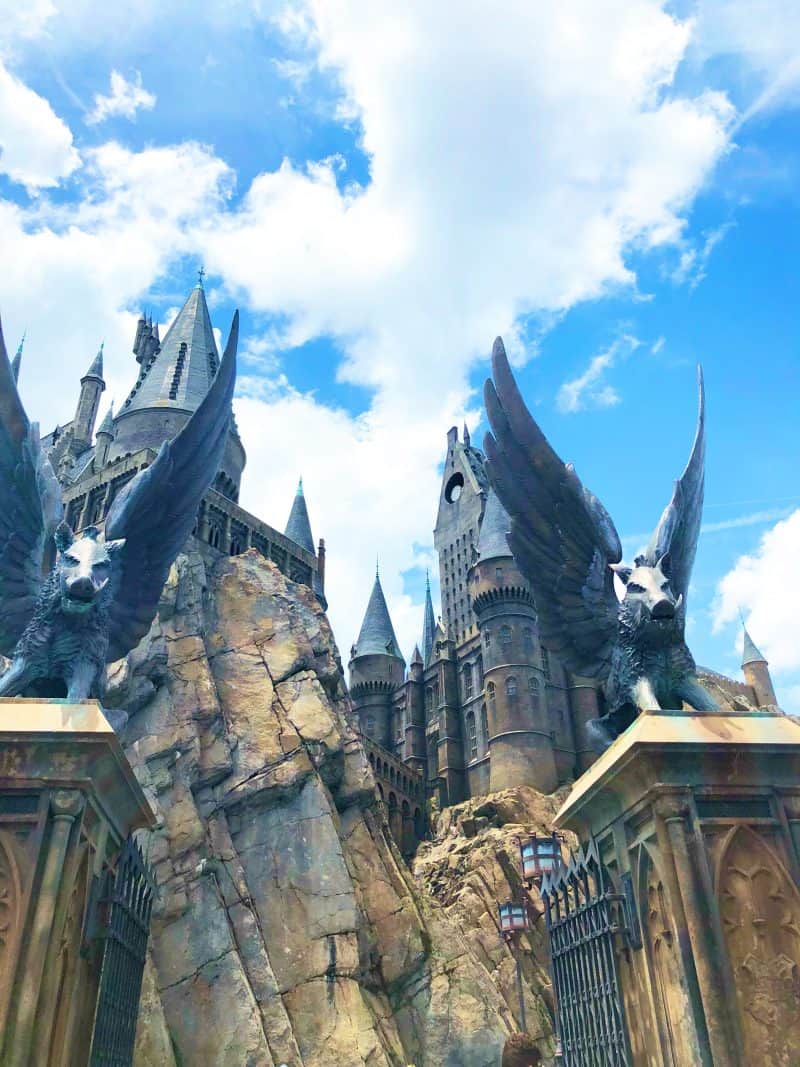 On our second day we had lunch at Three Broomsticks and did the Grand Feast.  It was yummy and the atmosphere was great. 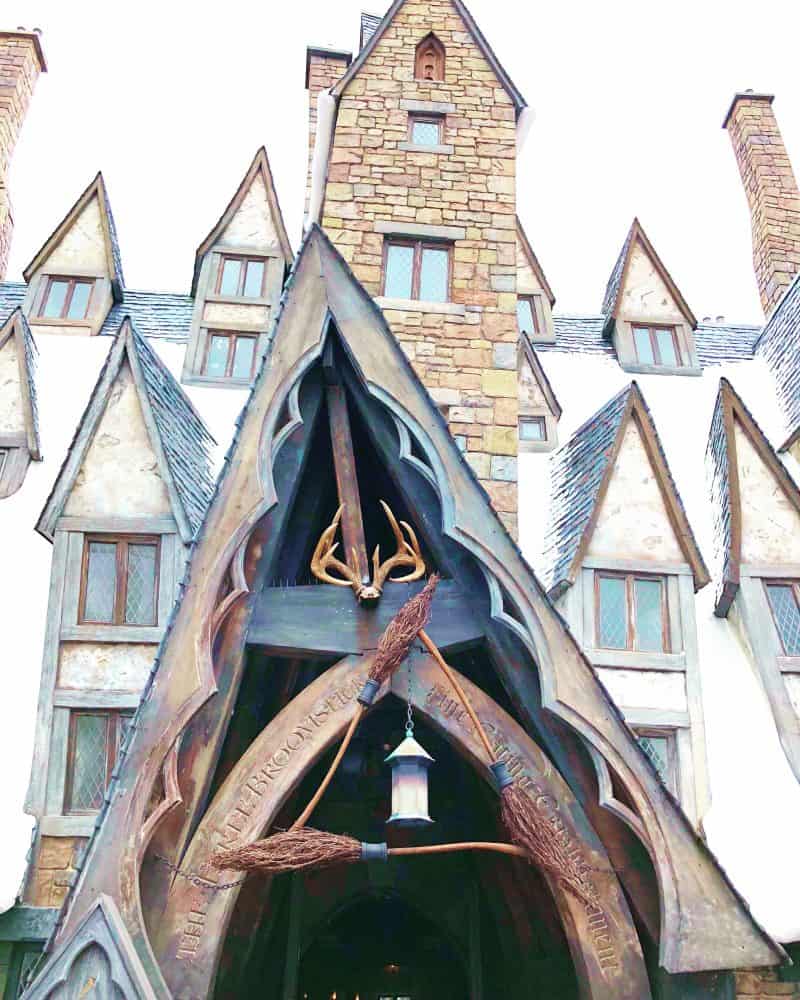 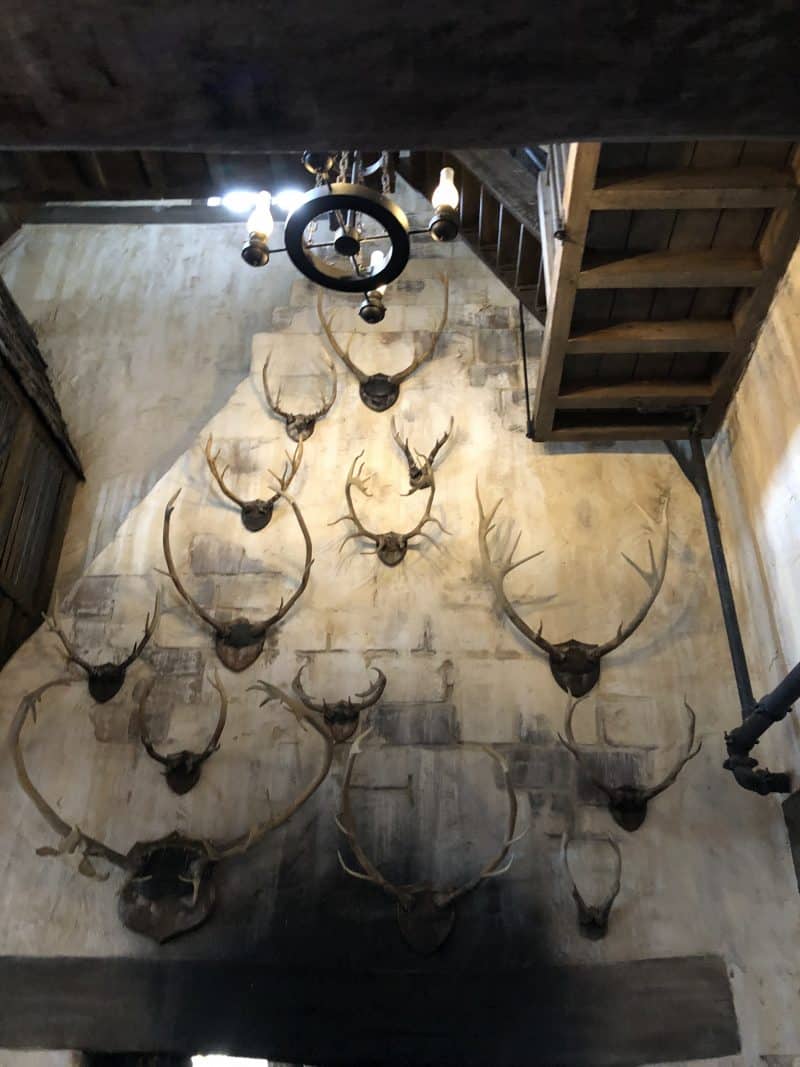 We didn’t ride Flight of the Hippogriff because it is one of the few rides not on Express Pass and the wait was lengthy.

There are more interactive wand experiences on this side of the park.  While the kids do that, be sure to have as much butterbeer as humanly possible.  :-) 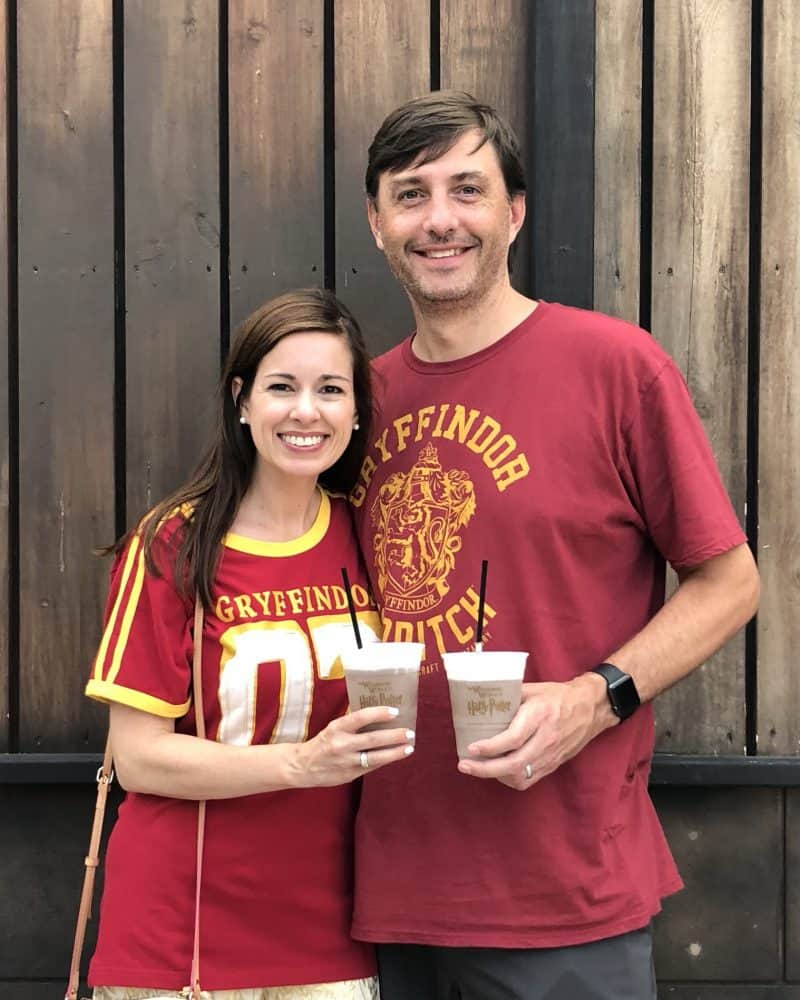 And don’t forget to explore Honeydukes.  This was my kids’ favorite shop.  They came out with things like chocolate frogs and fudge flies and were in heaven. 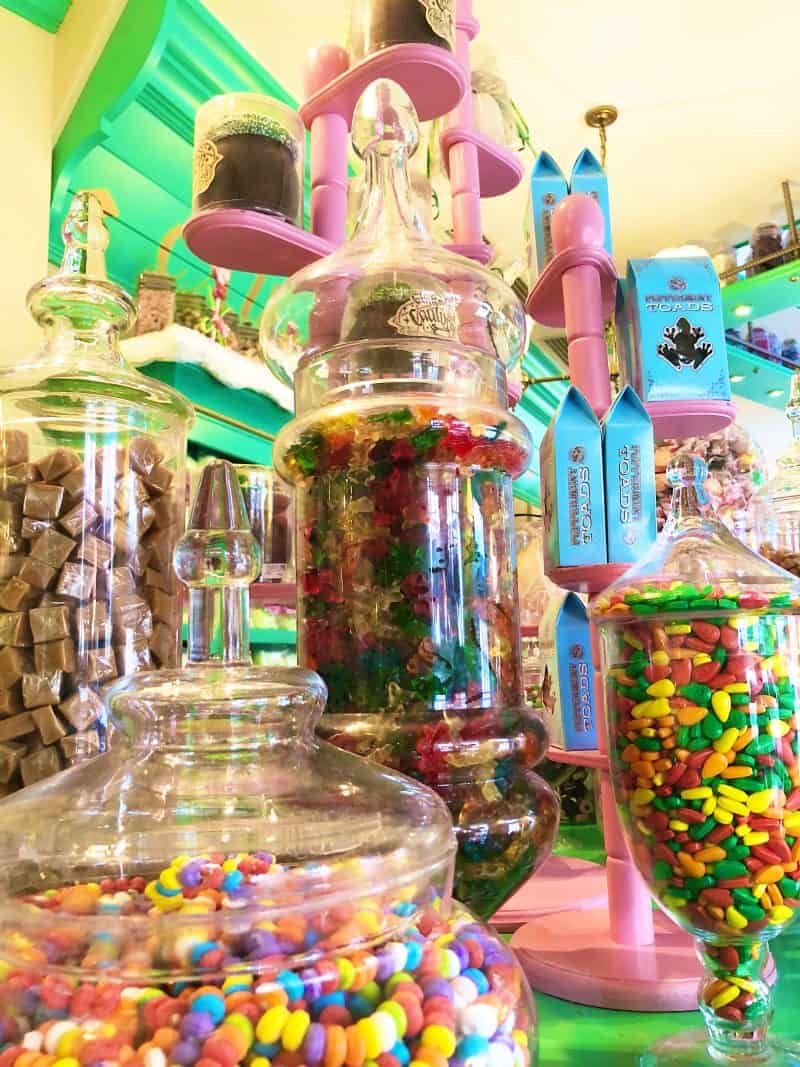 Believe it or not, we still had plenty of time to do every other attraction we were interested in over both parks in our two days.

Now, I will do pretty much anything once but I will not do Transformers, Simpsons or Despicable Me ever again.  I don’t usually have problems with motion sickness, but these were harsh. 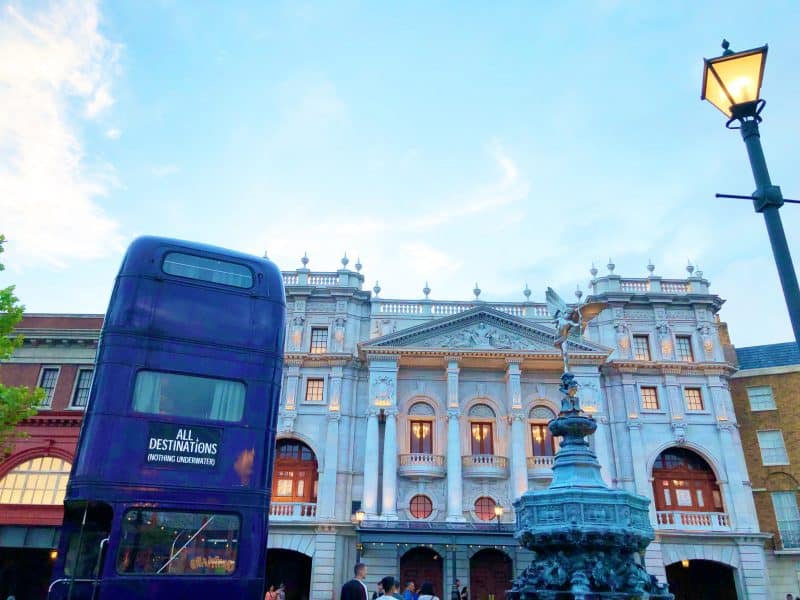 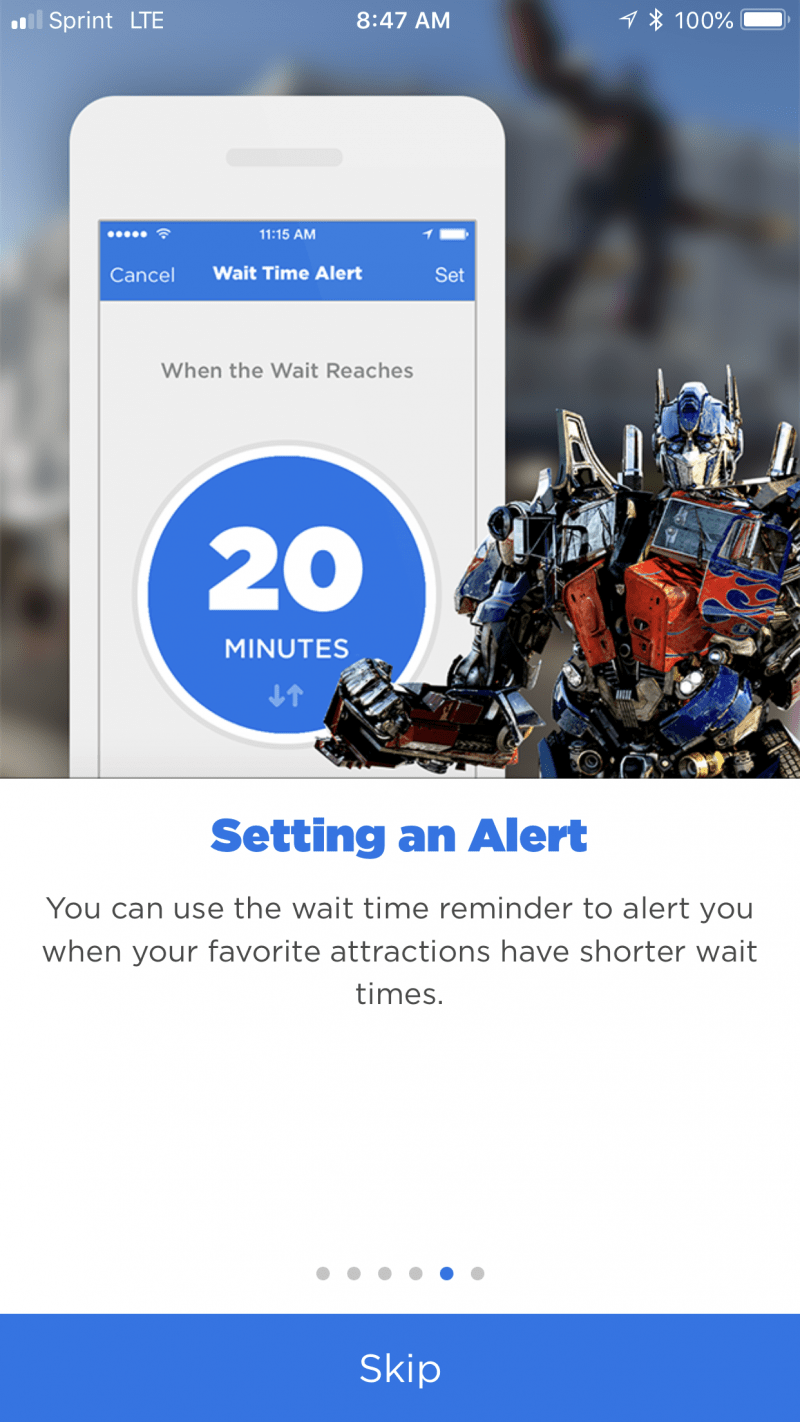 I’ll be back tomorrow with Volcano Bay Water Theme Park.  Feel free to ask away about the parks and Universal in general.  I’m happy to help!!