The minute that The Nester’s monogrammed canvas popped up on my Pinterest feed, I knew then and there that it was the perfect piece for my guest bathroom.  (Picture from The Nester) 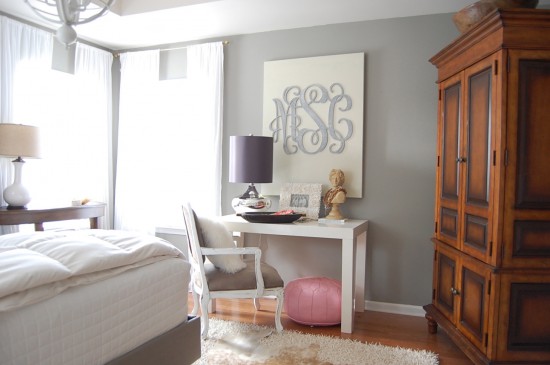 You see, I had a large space of wall to fill and not a whole lot to spend!  I already owned the large canvas (24″x30″) from a previous DIY painting project gone bad so all I needed was the monogram.

After scouring the internet for the lowest possible price, I ended up ordering the 18” white vine connected monogram from Scrappin Plus on etsy.  With shipping, it rang up at $32 – pretty cheap compared to prices upwards of $75 that I’d seen on other sites.  It arrived about a week later and, after rubbing some sand paper over the edges, I gave it a good coat of Annie Sloan’s duck egg blue chalk paint.  This took quite a long time to get all the little curves and crevices, but was well worth it!

After both the monogram and canvas were dry, he used a super glue to put the two together.  We let it set overnight and then propped it up on the floor for another day to make sure it wasn’t going to fall off.  (It didn’t and doesn’t seem to be going anywhere any time soon!) 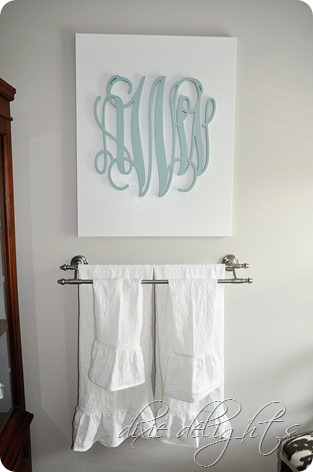 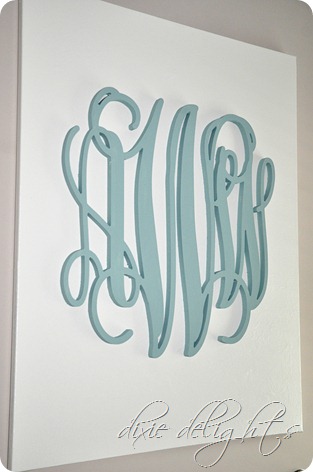 This was the last thing in the guest room so I’ll be doing the reveal real soon!
xoxo

Flattered for the features at My Uncommon Slice of Suburbia and Top This Top That!

Find me at Our Fifth House