We spent the better part of our day exploring Fort Pulaski – the site where the Union army’s rifled cannon made further such masonry fortifications obsolete and was a turning point in military history.

A little official history:  Though completed in 1847, Fort Pulaski was under the control of only two caretakers until 1860 when South Carolina seceded from the United States and set in motion the Civil War. It was at this time that Georgia governor Joseph E. Brown ordered Fort Pulaski to be taken by the state of Georgia. A steamship carrying 110 men from Savannah traveled downriver and the fort was seized by the state of Georgia. Following the secession of Georgia in February 1861, the state joined the Confederate States of America. Confederate troops then moved into the fort. By December 1861, Tybee Island was thought to be too isolated and unprepared for conflict and was abandoned by Confederate forces. This allowed Union troops to gain a foothold across the Savannah River from Fort Pulaski. Union forces under Quincy A. Gillmore began construction of batteries along the beaches of Tybee. On the morning of April 10, 1862 Union forces asked for the surrender of the Fort to prevent needless loss of life. Colonel Charles H. Olmstead, commander of the Confederate garrison, rejected the offer. Fort Pulaski was prepared for a possible infantry attack. However, Fort Pulaski never endured a direct land assault. With thirty-six guns, including the new James Rifled Cannon and Parrott rifles, Union troops began the long sustained bombardment of Fort Pulaski. The rifled projectiles could be accurately fired farther (4–5 miles) than the larger and heavier smoothbore cannonballs. Within thirty hours, the new rifled cannon had breached one of the fort’s corner walls. Shells now passed through the fort dangerously close to the Fort’s main powder magazine. Reluctantly, Colonel Olmstead surrendered the fort. Only two soldiers, one Confederate and one Union, were injured in the attack. Later, the fort was used as a war prison.

Although Mother and I have been to Fort Pulaski numerous times, it had admittedly been a long time and we found the fort just as fascinating as the littles!  We carefully crossed the moats so as to not fall in.  That sounds JUST like something the baby would do. 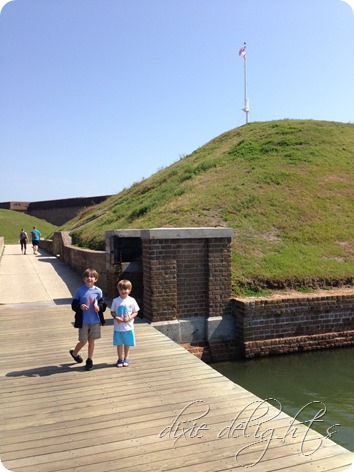 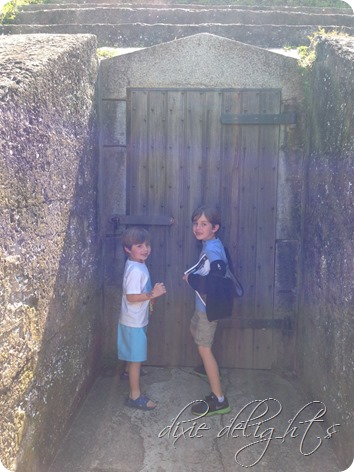 The littles participated in the Junior Ranger program – earning certificates and badges for their hard work.  It’s really a great way to engage littles ones in the history of the fort and it’s FREE!  You must request a booklet in the visitor center and complete the pages as you explore the park.  We completed the first activity right here on the second drawbridge: they were asked to look around and list or draw pictures of ways that the fort was protected from invasion (ie. the moat, drawbridge, iron studs in the door *love that paint color by the way*, narrow windows, tall walls, etc.).  From this moment they were hooked! 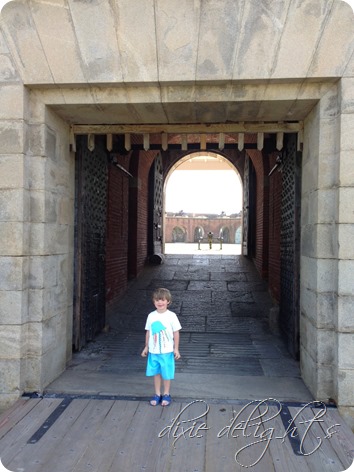 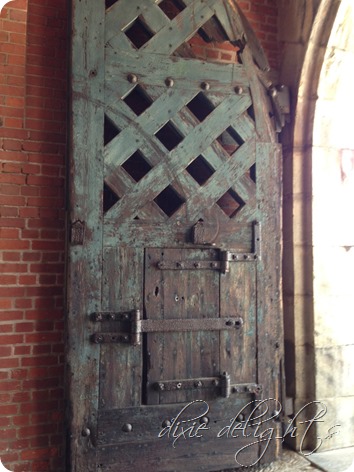 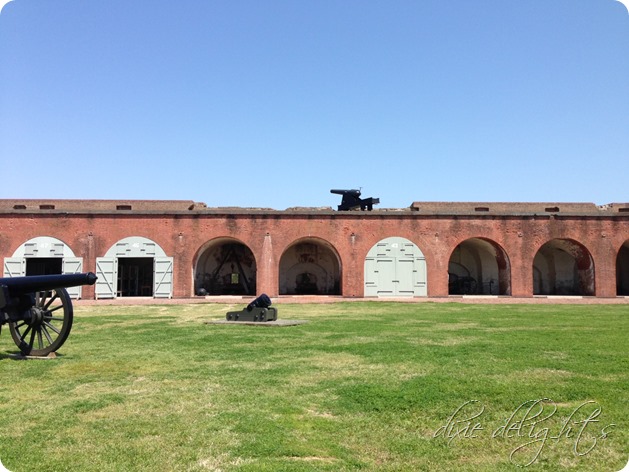 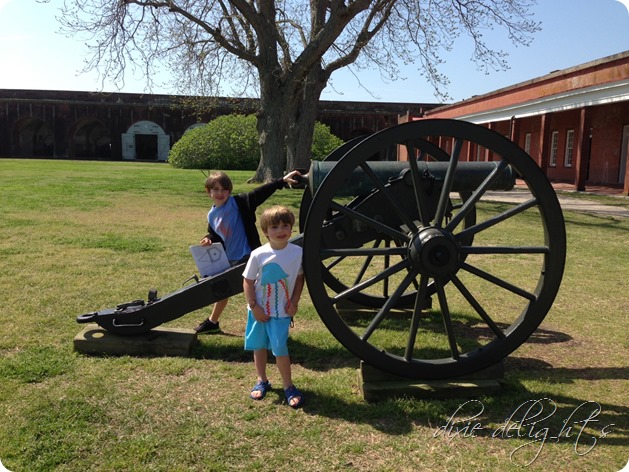 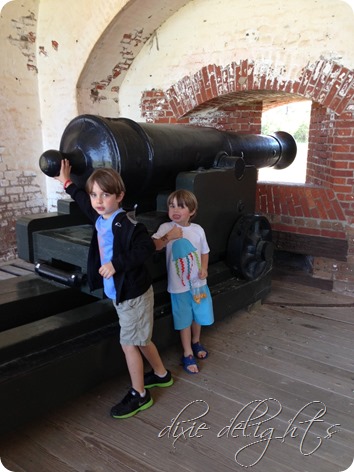 (This one was also used in imprison Confederate military leaders after the Union captured the fort.) 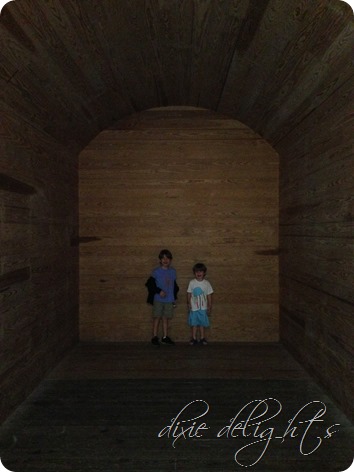 We imagined the horror of 600  men imprisoned in such a small space with so few beds and so little food.  They had to eat rats to stay alive!  (Learn more about the Immortal 600 here.) 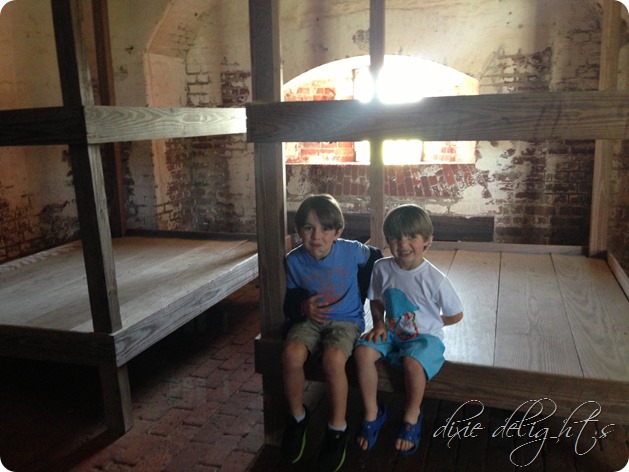 We marveled at the architecture and views of Cockspur and Tybee Islands. 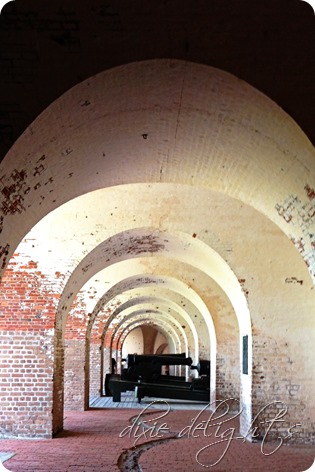 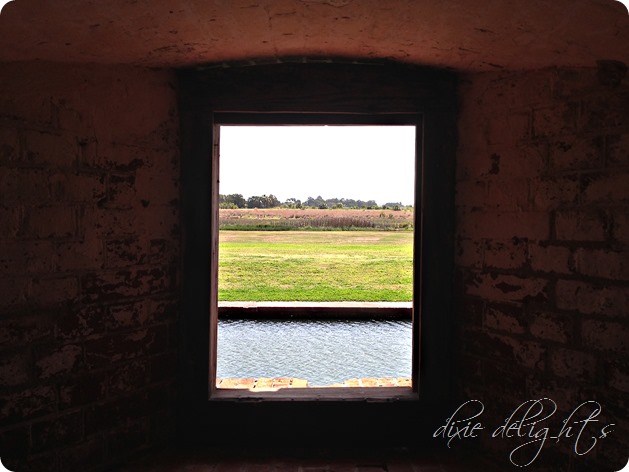 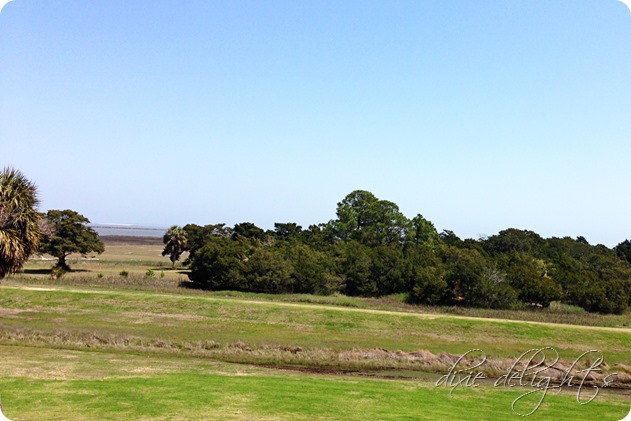 We participated in a fascinating musket demonstration and firing.  The littles loved learning about how the paper cartridges were made, used and stored during the war.   The PCP can’t seem to understand that this guy was just an actor – he insists he is the last living soldier from the Civil War.  Oooookay. 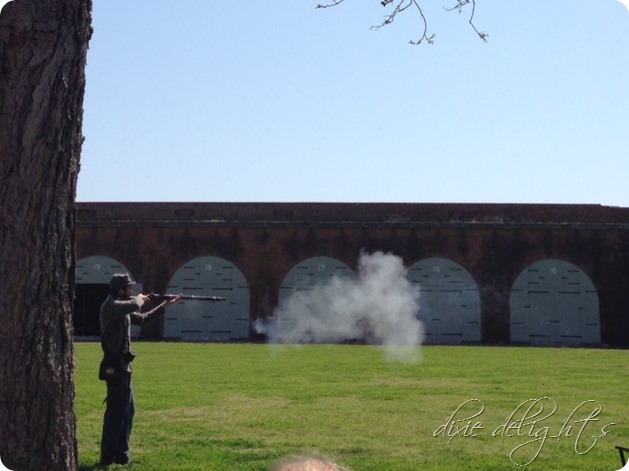 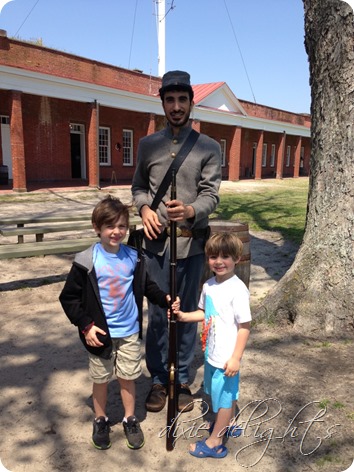 After much begging and pleading, we finally headed up top.  There are NO rails and the thought of keeping my two maniacs in one piece was a little daunting.  However, the views were gorgeous and there were loads of cannons to explore. 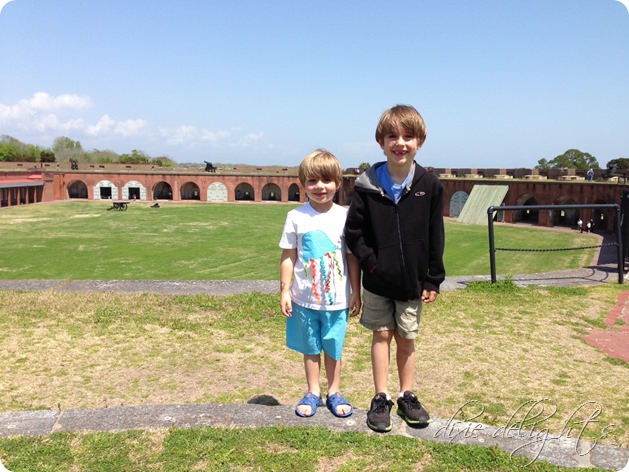 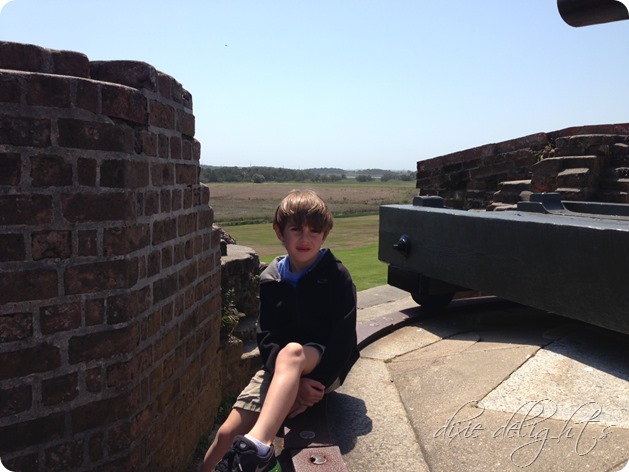 When we had our feet safely on the ground again, we headed back to the visitor center to have the littles take the Junior Park Ranger Oath and receive their badges.  They were also treated to sets of the Fort Pulaski Trading Cards.  More than 500 different cards from 90 national parks in 31 states can be collected as part of the National Park Service trading card series. 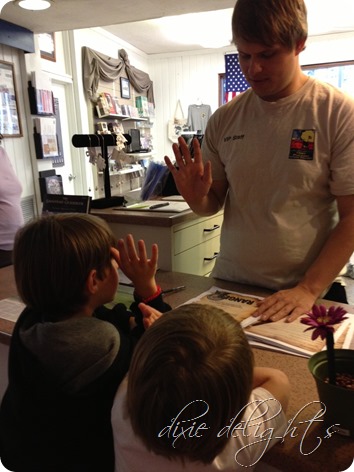 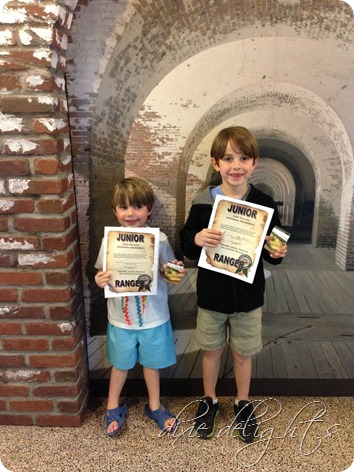 Other things to know:

When we finished up it was well past lunch so we headed down to Spanky’s beachside for some fingers and spuds before lounging the rest of the day away on the beach.  The water was freezing but that didn’t seem to deter the PCP – or the hundreds of others acting like it was bathtub water. 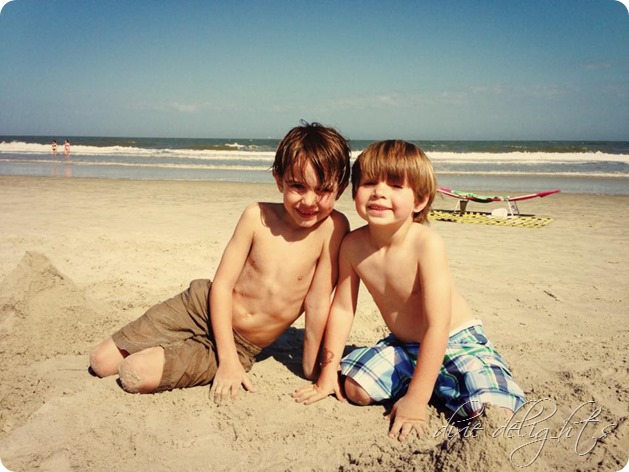 Daddy-O made cheeseburger and BLT tacos a la Taqueria del Sol and they were deeeeelish!  I can’t help but feel a little bad for Honey back home eating Taco Bell and Arby’s all week.  (Don’t let me fool you – he love it!)
xoxo