Inspired by this darling idea, the PCP’s class presented Mrs. B with a book of High Fives for her end-of-year class gift at the Author’s Tea. 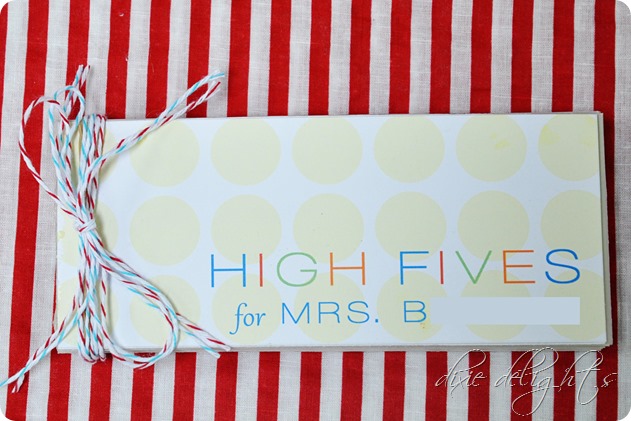 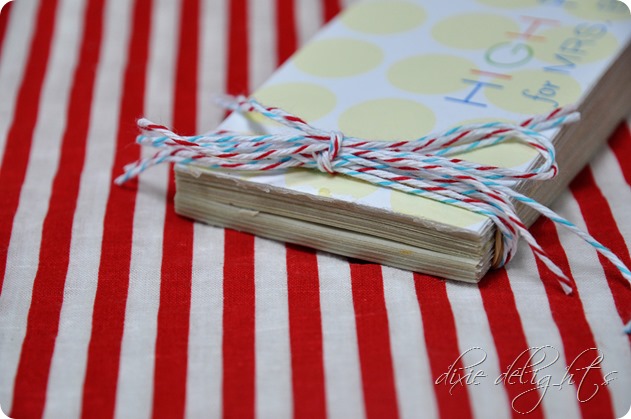 It’s essentially a note pad of sweet thoughts from her students (aka “high fives”) with crisp $5 bills in between. 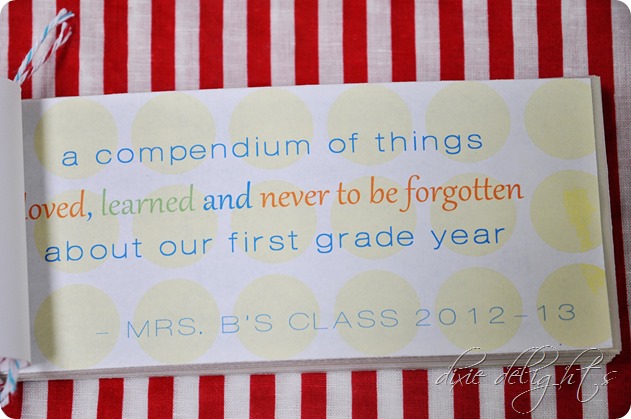 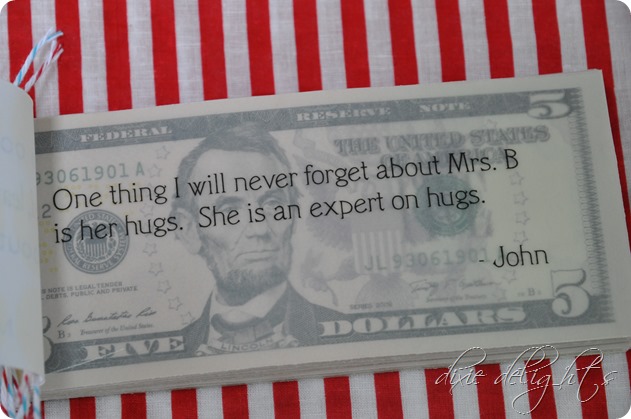 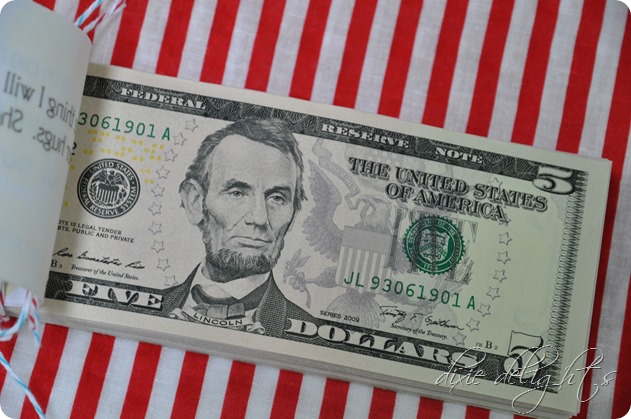 I sent home letters and sent out emails a few weeks back with questions for the kids.  I asked parents to write down exactly what their student said – not worrying too much if it made sense or sounded silly.  I wanted the memories to be in the voice of Mrs. B’s first graders!  The answers that came back were just as sweet as can be and the love that these kids had for their teacher showed in every single one.  I knew she was outstanding, but it was completely moving to read what twenty-five seven year olds had to say.  Here are some favorites…

As she spends her bills, she will be reminded of all of the reasons she’s loved and will never be forgotten.  And once they are all peeled out and gone, she will be left with a little book of memories from a class that loved her to pieces.

Now, as far as how to make the book, here’s the gist:
1. Collect quotes.  Send out letters and emails with your questions for the kids.  Here is my list:

2. Collect money.  This was obviously optional and the amount was totally up the parents.  Some parents wanted to do their own gift, contribute less and do both, or chose not to contribute at all, WHICH IS FINE!  I still asked that they send back the answers to the questions.  I had originally intended to do 100 Reasons Why We Love Mrs. B with $1 bills and was completely blown away when the money started coming in and totaled $300!!!!

3. Exchange your wads of old crumpled cash and checks for new bills or “clean” bills.  Here’s where things went south…I thought I could just go in the bank and get a bunch of nice looking bills, or at least request them for a later date.  No can do.  My bank acted like I was completely nuts (which was not entirely unfounded) – at all three branches I went to in person.  No luck over the phone either.  Enter Sister’s Mister who saves the day!  He has connections at the Delta Community Credit Union through his line of work and they were happy to bring in my sixty new $5 bills on an armored truck.  I kid you not.  Honey went with a metal padded briefcase to pick them up at the appointed time (okay, he didn’t bring a brief case but I totally thought he should have.)  I read all the comments on the original blog about this project and it seemed like it was pretty easy to pull off for others that have done this or something similar.

4. Make your notepad.  I measured my bills and printed and cut sixty of the collected quotes on vellum.  I mistakenly thought I could pop in Michael’s and pick up this “padding compound” but was yet again met with a dead end.  Apparently this stuff is hard to find outside of the internet and I had to turn the book around in two days.  So, I took my stack of money to Kinkos and they did it for $1.59. I fretted the entire 24 hours that it was out of my possession but the store manager said he had everything on camera should it come to that.  If I were ever to do this again, I would prefer to get the padding compound and do it myself so as to save myself a lot of worrying, pacing and fretting.  I would also put on an extra cover and a few extra pages at the end and then tear them off before giving it as a gift because the padding compound looked a little messy on the top and bottom pages.

The art mom for the class also coordinated this sweet and colorful owl canvas from the kids fingerprints.  Such a darling idea! 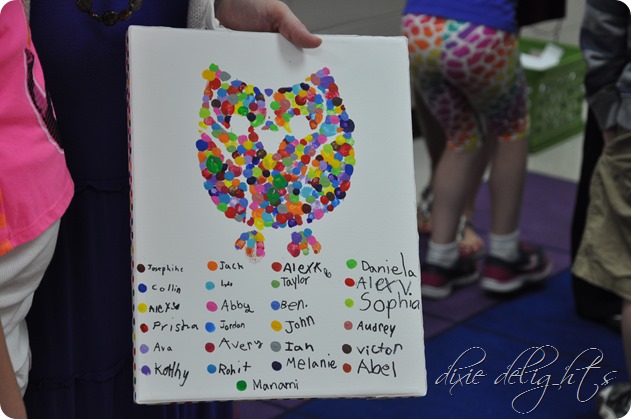 I do not exaggerate when I say there was not a dry eye in the room.  Mrs. B is truly one of a kind and we were SO SO blessed to have her this year. 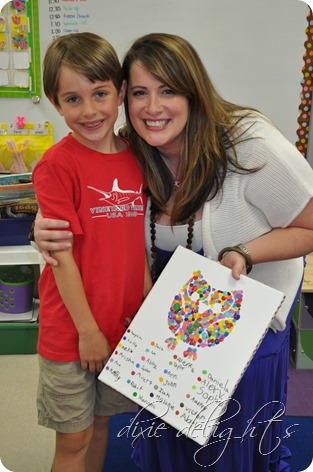 We all have a teacher that we adored, that believed in us, challenged us and made us feel special.  Mine was Mrs. Coleman and I was lucky enough to have her for 2nd AND 3rd grades.  I know that this lady is that person to many, many children – mine included!
xoxo