Since we didn’t want to get park tickets for our arrival day, we splurged on tickets to the Pirates & Pals Fireworks Voyage. This unforgettable moonlit cruise of the 7 Seas Lagoon sets sail from the Contemporary Resort.  We arrived early and dined at the Contempo Cafe, where the littles adored watching the monorails roll through, before checking in for the voyage. 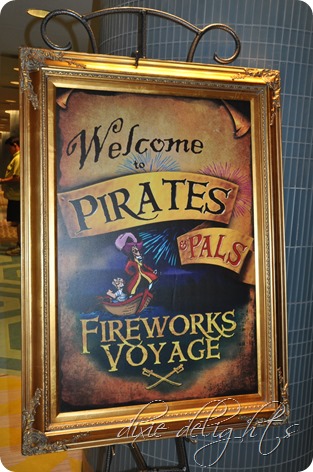 The festivities kicked off at 8:45 and we checked in around 8:15.  The littles immediately donned their pirate bandannas and posed for a photo with the pirate skeleton. 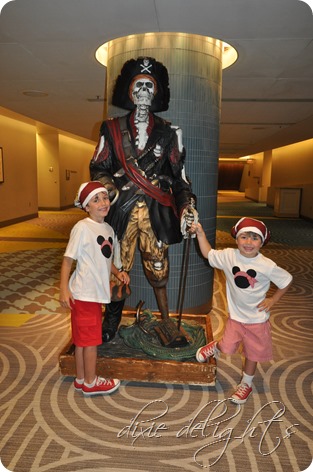 There were also coloring pages and a little game sheet to occupy the time. 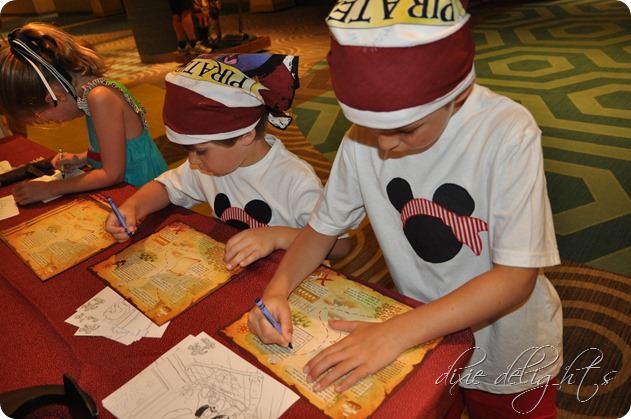 Finally it was time for Patch and his “twin brother” Patch to escort us into the room for a hearty welcome of seafaring snacks and beverages, including cake, frozen treats, bags of popcorn, pretzels and cotton candy, chocolate doubloons, lemonade and tea. 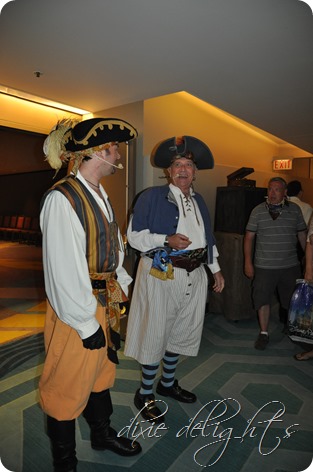 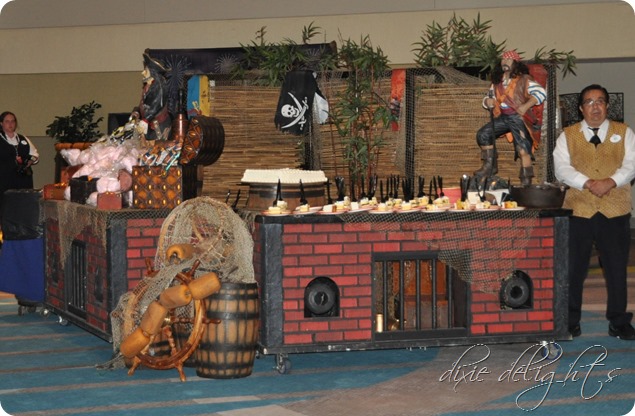 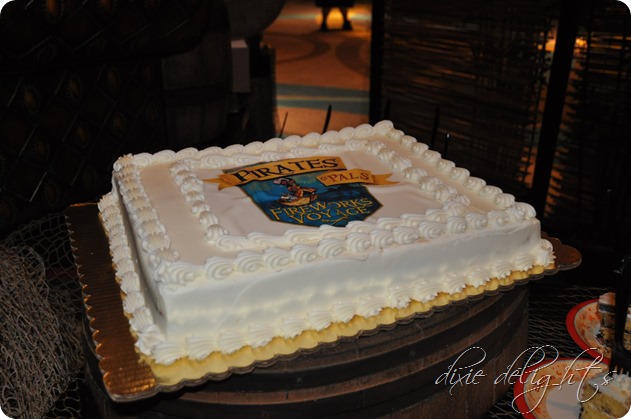 Patch told the PCP to look for the freezer, to knock three times and then to open it for the biggest treat of all.  We immediately sought it out and when the PCP opened it to find self serve MIckey bars, Mickey ice cream sandwiches and popsicles and exclaimed “noooooo waaaaaaaaay!  It’s the best day of my liiiiiiiiife!!!!” 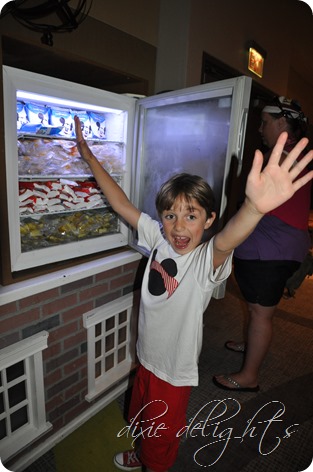 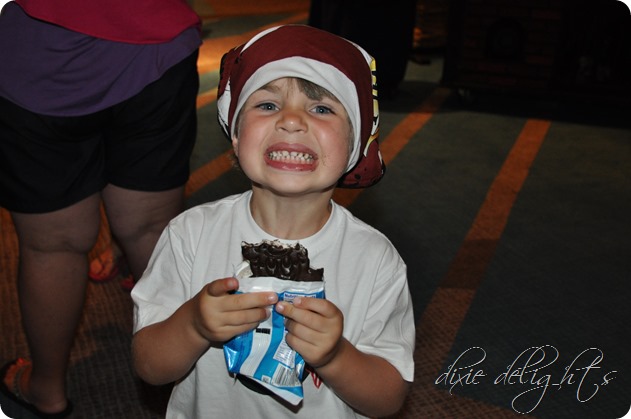 We’d not had the pleasure of meeting Hook or Smee on previous jaunts to Disney so this was quite a treat!  They took time to joke around, sign books and pose for pictures with everyone in attendance. 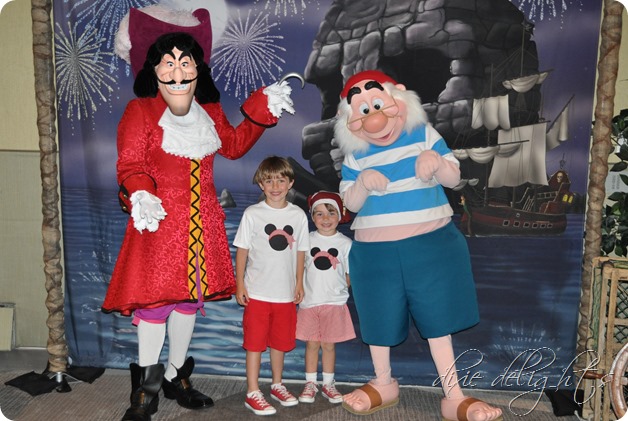 (I obvi thought this was some sort of glamour shot based on that pose.  Note to self: check ruffle on that dress before future photos.) 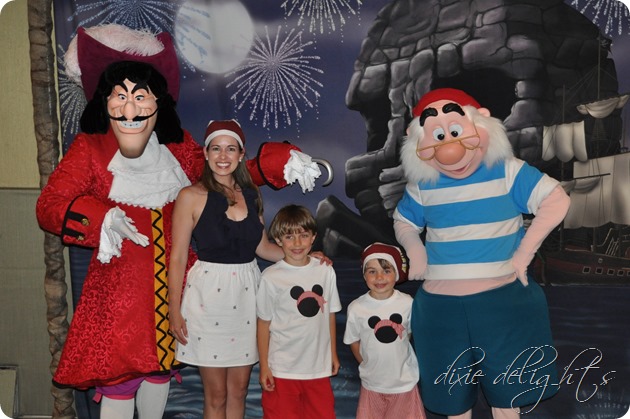 Patch and Patch called all sailors to board their boats.  We were assigned to the Smee boat when we checked in and were absolutely giddy when our Patch called John up (this was predetermined and was a surprise to us) to bear the flag and escort our crew to sea! 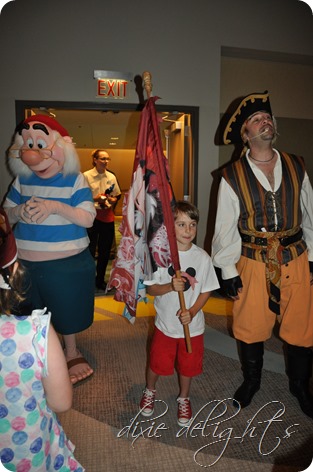 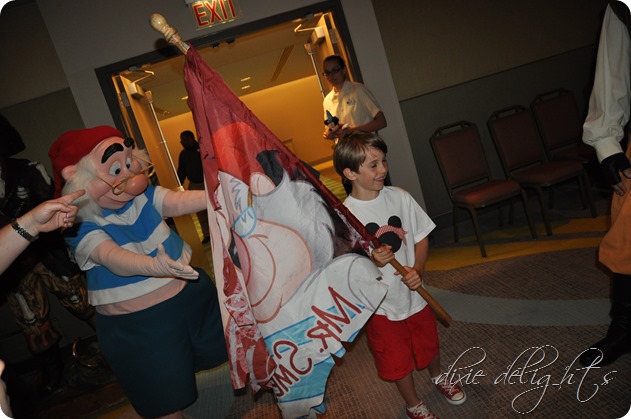 Our Patch was hysterical and John and Whit were thrilled to walk with him to the dock. 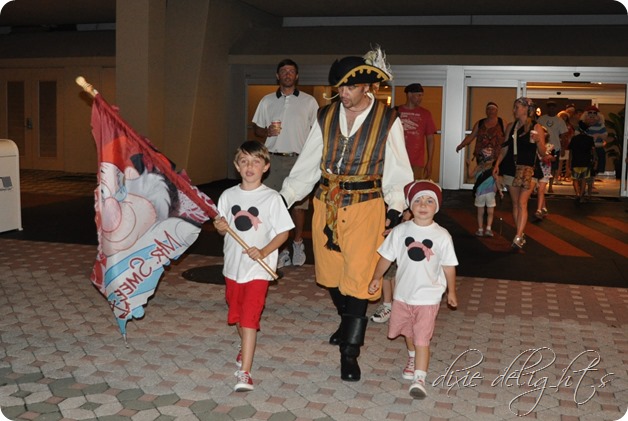 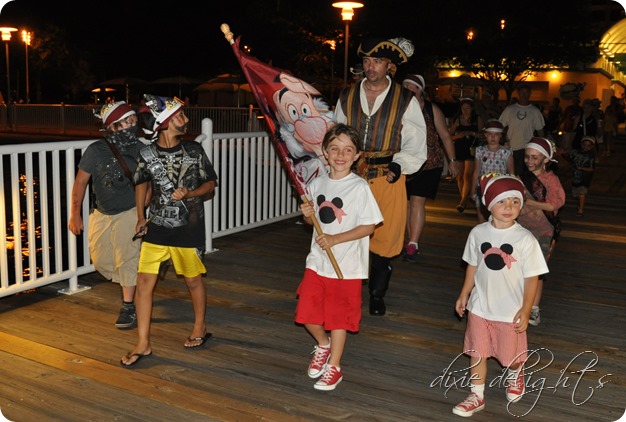 As we settled into our seats and set sail, Captain Hook and bumbling Mr. Smee were on hand for the send off. 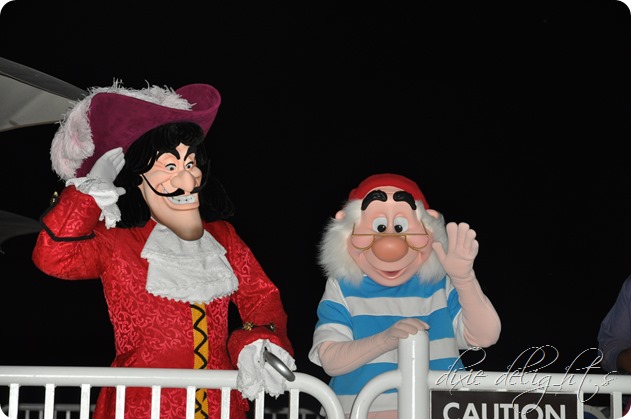 The rollicking voyage was filled with spirited sing-alongs, tall tales and Disney trivia games.  Patch had just the right balance of keeping the adults in stitches and the littles entertained. 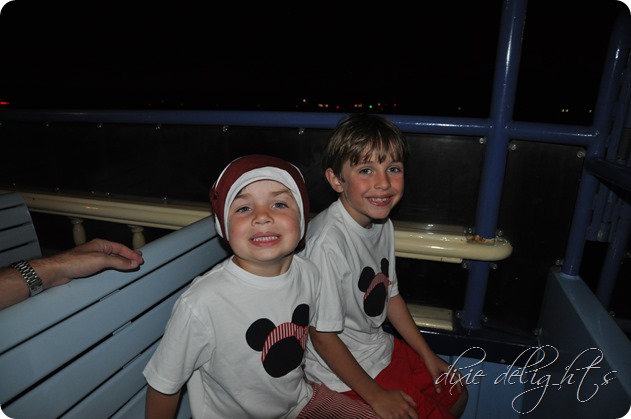 We stopped right in the middle of the lagoon for an up-close viewing of the Electrical Water Pagent!  This twinkling nighttime tradition was one of my favorite Disney memories from our visits as a child.  Of course, we’d never seen it from this perspective! 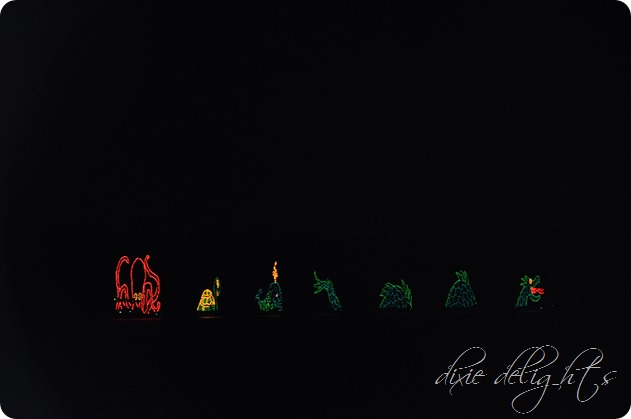 And after a leisurely and enjoyable cruise, we anchored on the water right in front of the Magical Kingdom.  It was breathtaking and relaxing from this vantage point – no crowds or tired feet.  Just twinkling lights, glittering water and the castle changing colors in the background. 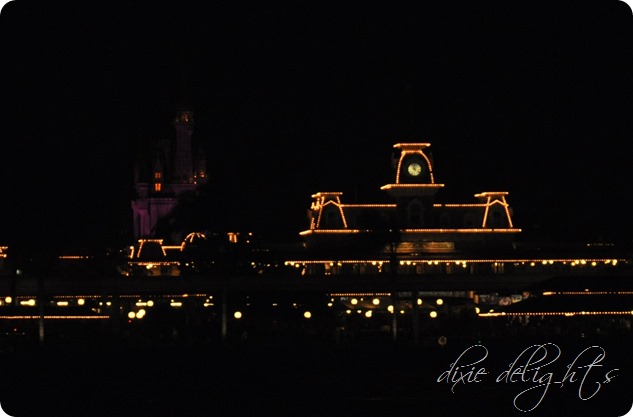 And finally it was time for the main event!  The Wishes Nighttime Spectacular!  They piped the music into the boat for the kind of splendidly magical experience that Disney does so well. 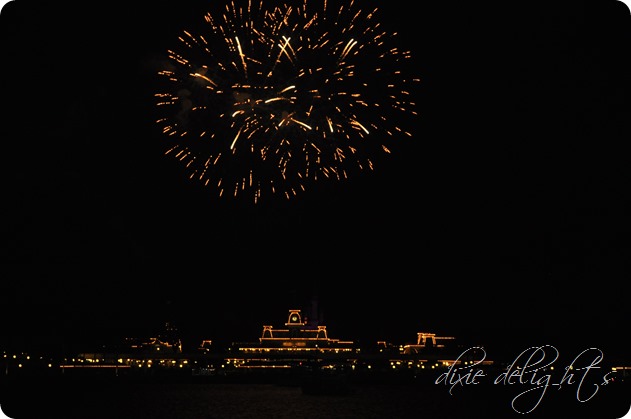 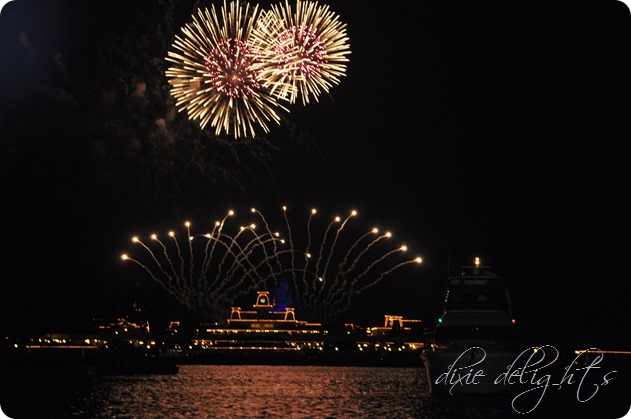 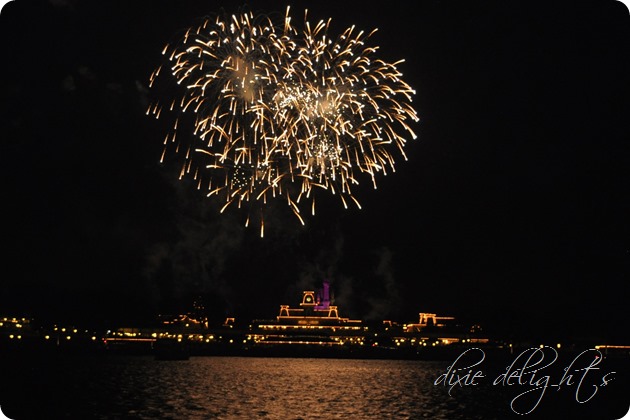 As we cruised back, Patch began telling the story of Peter Pan.  And much to our surprise and delight, he jumped straight up onto the dock as our boat was pulling in! 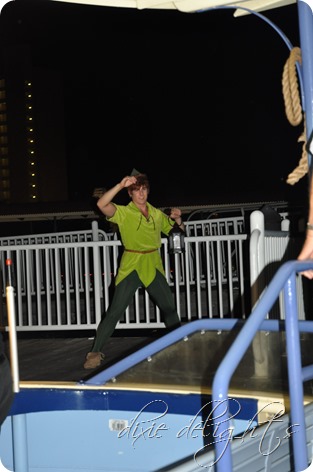 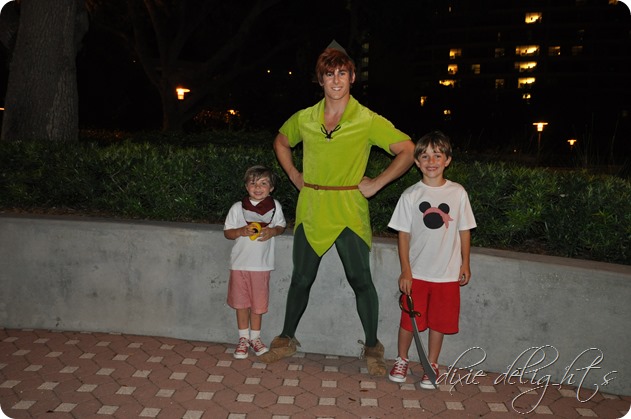 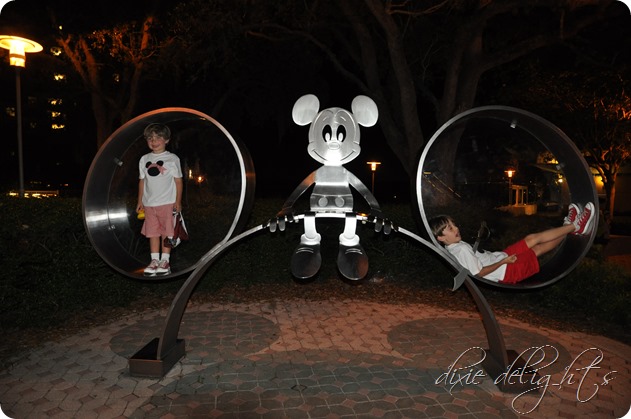 This was one of those nights we won’t soon forget!!
xoxo