Friday morning we were up before the rooster crowed to don our tutu’s (made by “tutu boss” CLS) and head off to Epcot for the Cinderella Royal Family 5k!!!  I had no idea what to expect and was completely wowed by the entire event.  We boarded our bus at 5 a.m. and disembarked in the middle of a fabulous start line warm up dance party filled with all sorts of fabulously costumed runners.  Magical!!!!  We went as the Monsters Inc. crew – Boo, Sully, Mike and Ros. 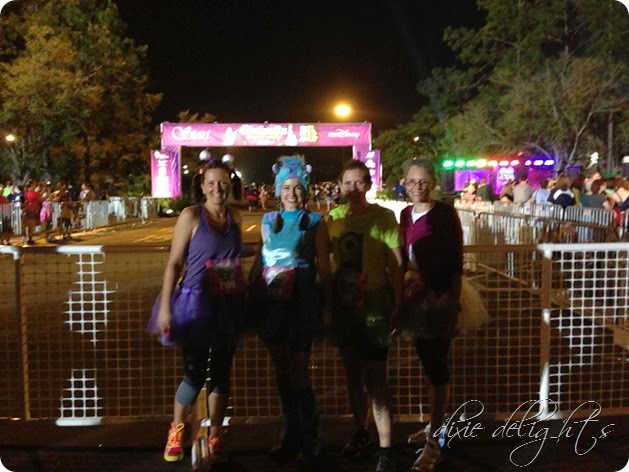 And when it was time for our group to go, we headed out not to a start gun, but to fireworks.  YAYYYYYYYYY!!!!!!!! 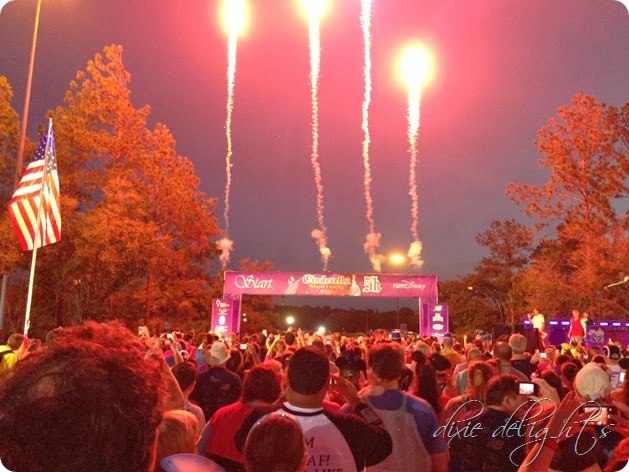 The first mile was through the parking lot and back of the park, but once we got into Epcot it became pretty magical.  The park was pristine and everything for the Flower and Garden festival was in the works.  We “wogged”  (that’s our term for a walk/jog), soaking up the experience and taking time for a few pictures along the way. 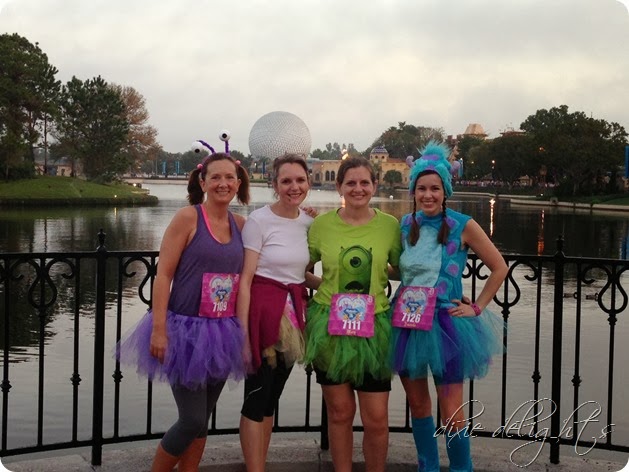 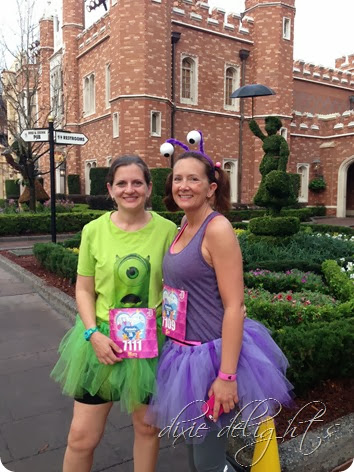 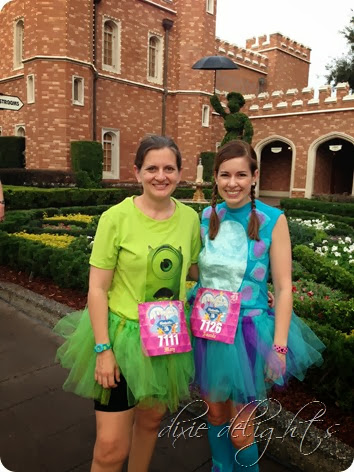 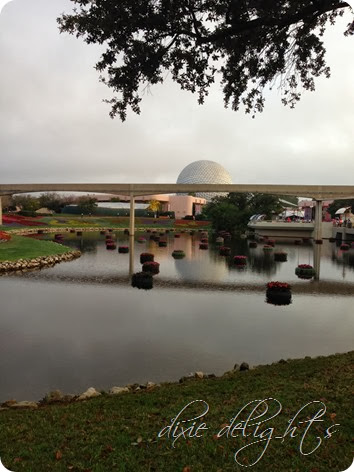 Now, when I randomly chose Sully for my Monster get up, I didn’t really have any idea how I was going to pull it off.  I searched for a turquoise running tank to no avail, and then one afternoon when I was picking up the playroom I came across the PCP’s Sully costume from last year’s Mickey’s Not So Scary Halloween Party.  Well, if you recall, it was a hot day and I ended up practically sawing off the sleeves to the shirt that Mother had so meticulously made for him.  I tried on his sleeveless shirt and it fit!  And then I thought, what could I do with these cut off sleeves… when I pulled them on my legs, it just all came together.  Topped off with the “tutu boss’s” fantastic and glittery Sully creation and the whole ensemble “screamed” ME!! SO FUN!! 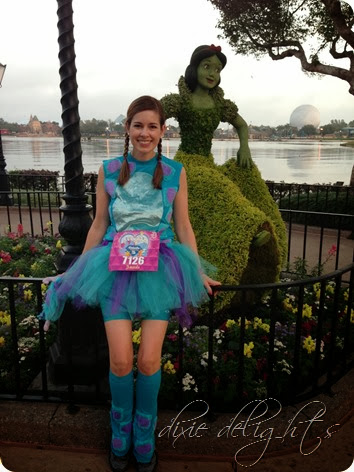 When we crossed the finish line and I received my first medal ever I truly felt inspired to actually run it next year :-) 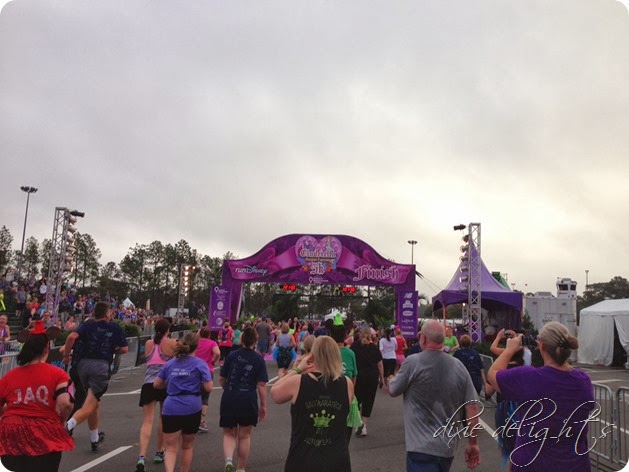 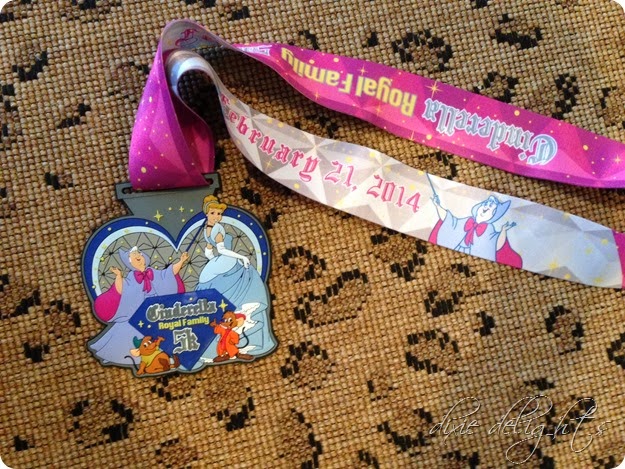 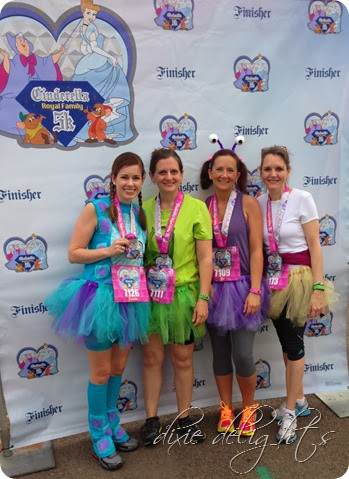 After picking up the coveted runDisney snack boxes and boarding our coach back to the Caribbean Beach, we showered and headed off to The Boardwalk Inn.  We took boxed lunches from the BoardWalk Bakery – including their new peanut butter, banana, and candied bacon pie –  to tables on the water and enjoyed a lovely afternoon of girl talk. 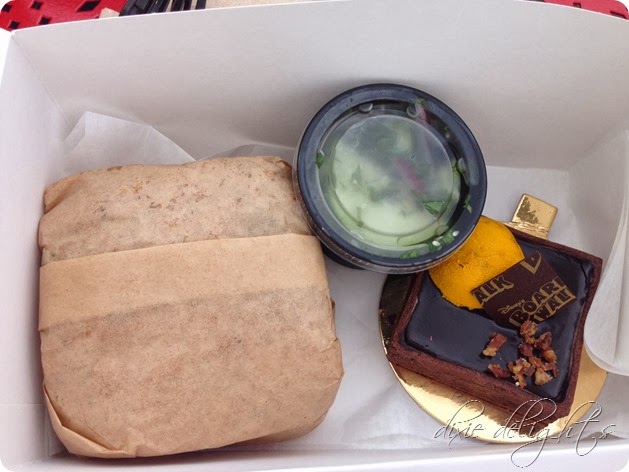 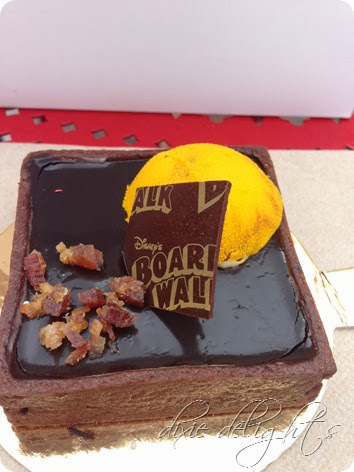 The rest of our day was spent snoozing and relaxing on the beach before an evening at Downtown Disney.
xoxo