We recently made the quick drive over to Columbia, South Carolina for a long weekend!  Like last summer in Charlotte, we were brought to town for a lacrosse tournament but we extended our time on the front and back ends to experience the city.  After doing this two years in a row, I really cannot recommend it enough.  Our tournament was Saturday and Sunday morning so here is how we planned our stay: 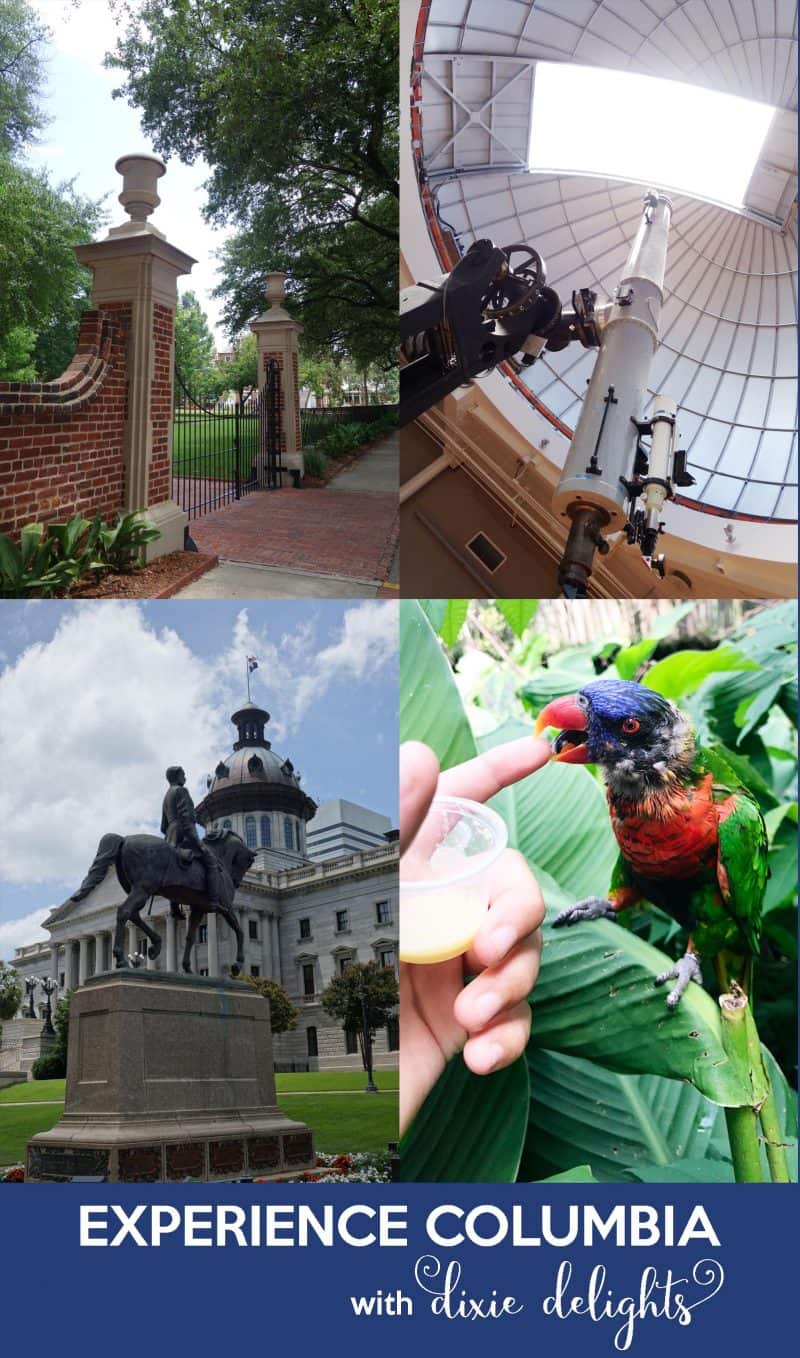 Honey needed to get in a full day of work on Friday so the boys and I headed out of town at 8AM with our dear friends the A family.  We were in Cola just at the start of the lunch hour and headed to the Five Points neighborhood for The Gourmet Shop.  We walked around a bit, discovering things like Hootie & the Blowfish Blvd (I’m a big fan!) and some great flag art. 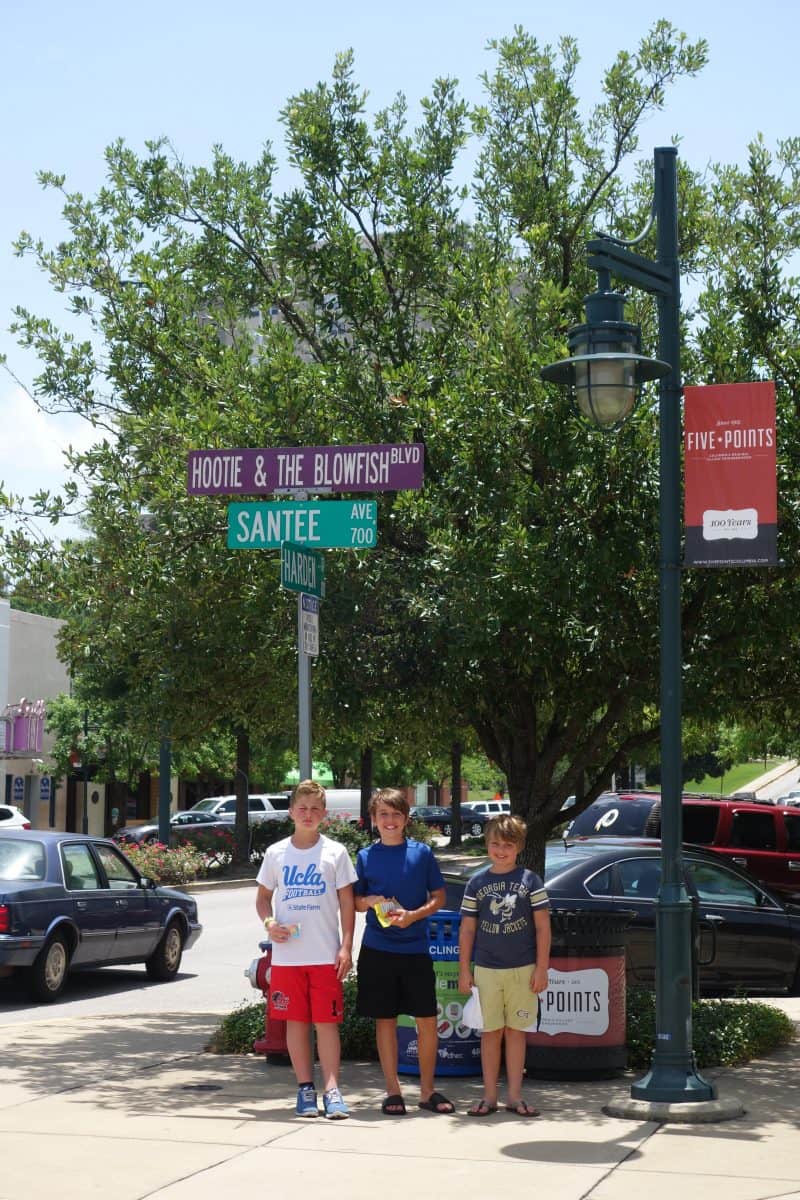 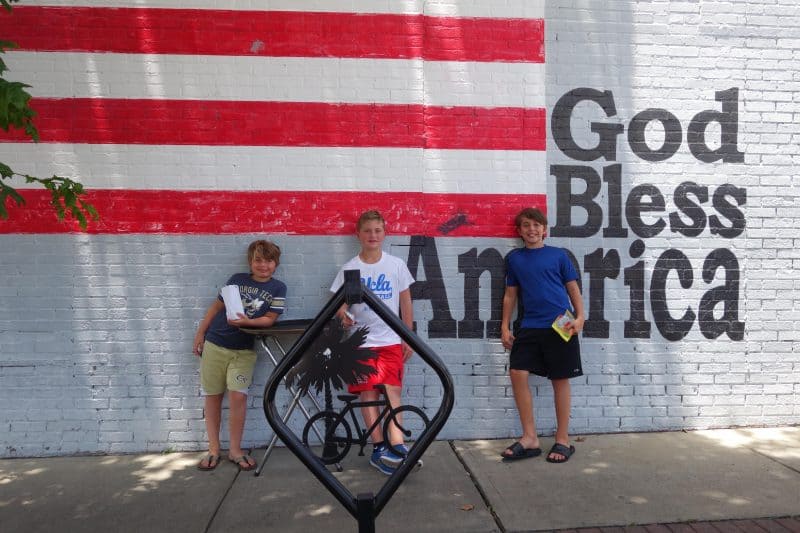 As soon as we walked in The Gourmet Shop we knew we were in for a treat. 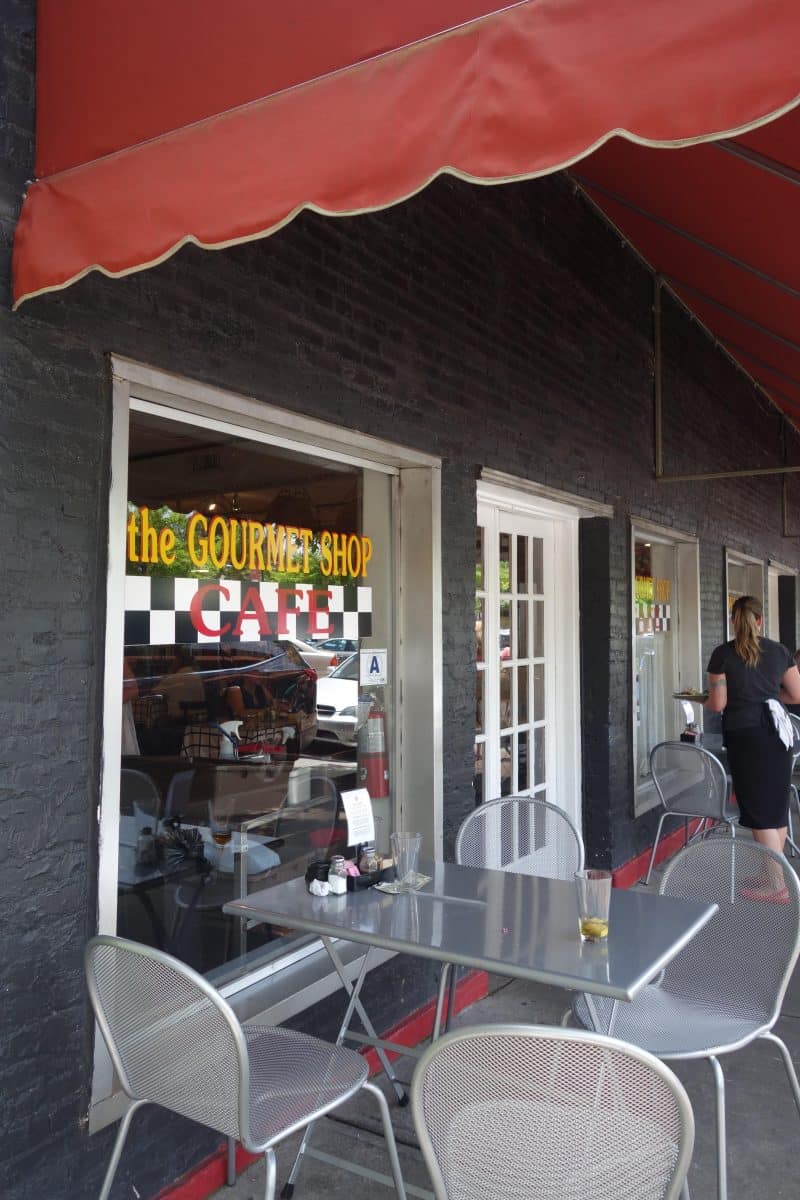 The retail side features a decadent selection of meats, cheeses, wines, desserts and even kitchenwares. 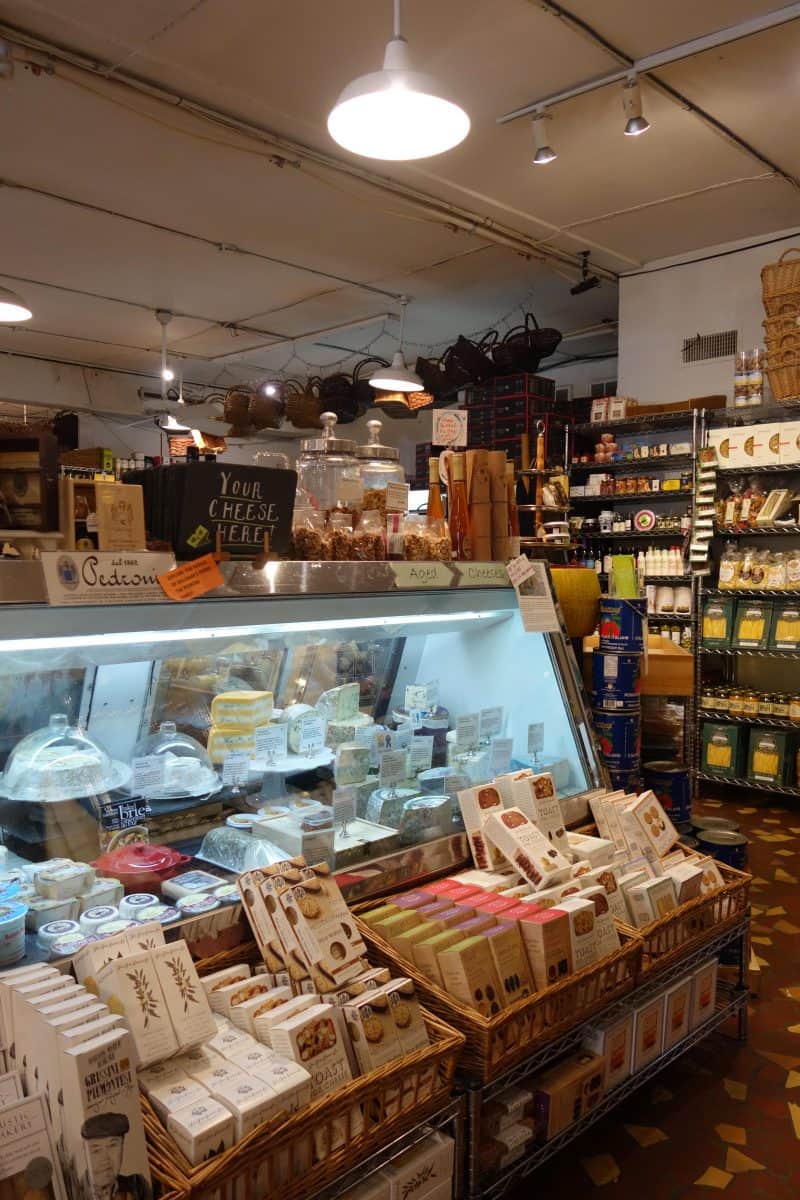 But tucked in the far corner is a deli.  After drooling over every plate that walked by, we settled on paninis for the boys and chicken salad for the moms.  Let me just say that it was absolutely incredible and we talked about it for the rest of the weekend!! 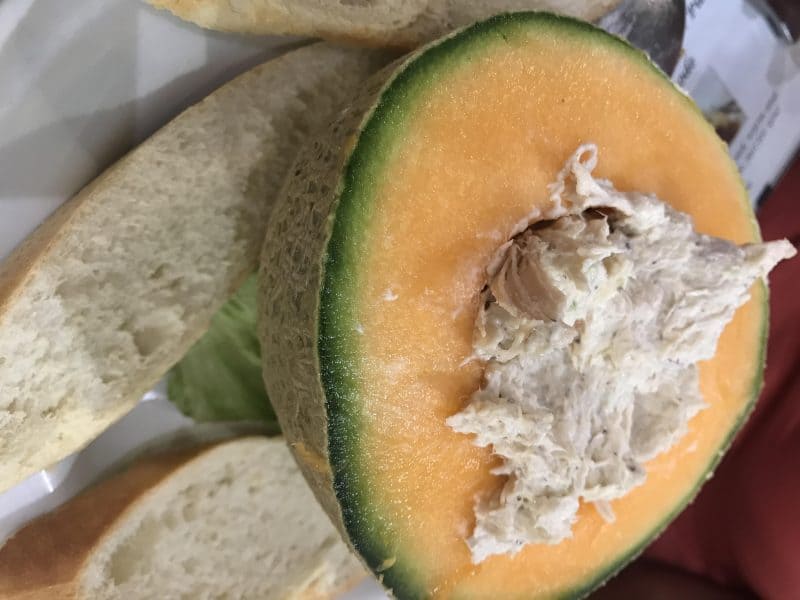 After lunch we chose a few sweet treats to go and headed for the USC campus.  With a car full of boys, we had to at least take a peek at the Gamecocks Stadium.  We only did a drive by, but it was quite impressive AND we got to hear Cocky crowing.  That was pretty cool!  We also drove by the famed Cockabooses (worth looking up!) although we had no clue what they were at the time.  The campus was lovely and sprawling, but we finally reached our final destination at the Historic Horseshoe. 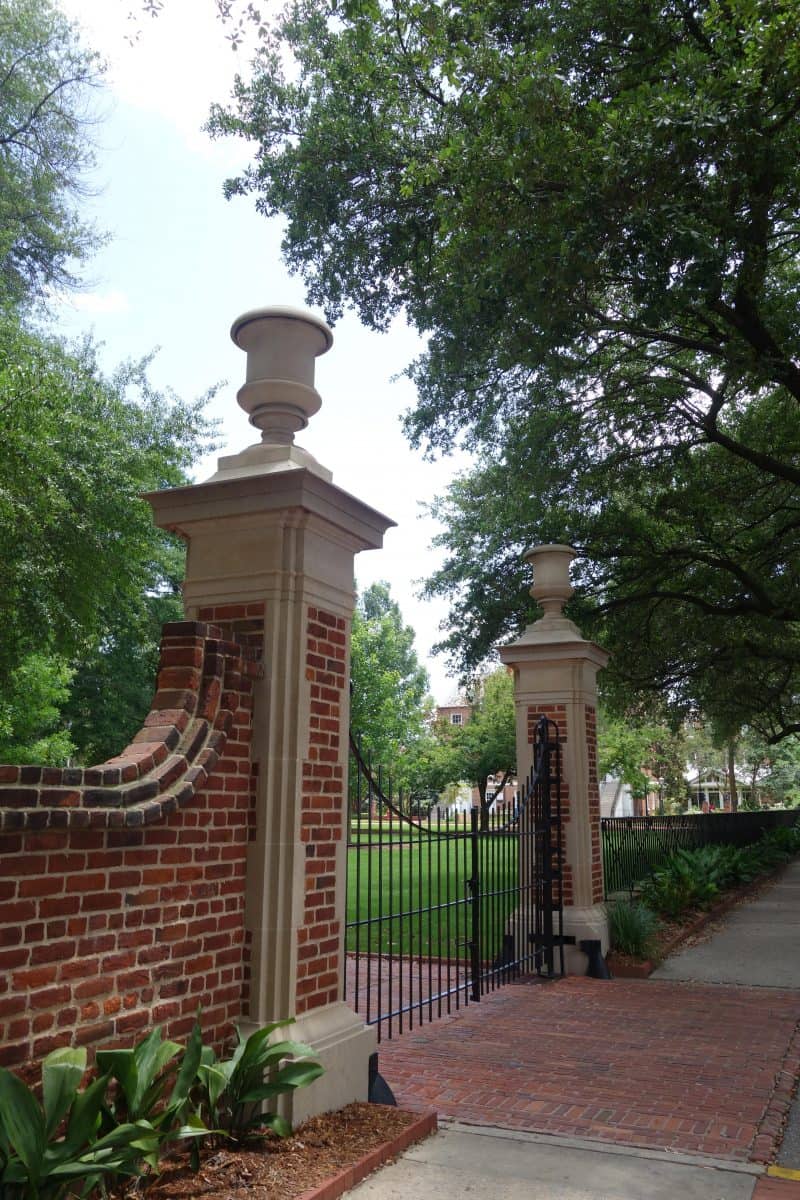 The Horseshoe served as the college’s original campus from 1805.  Later, in 1861, the entire student body volunteered for Confederate service and this area became a soldier’s hospital from 1862-1865. 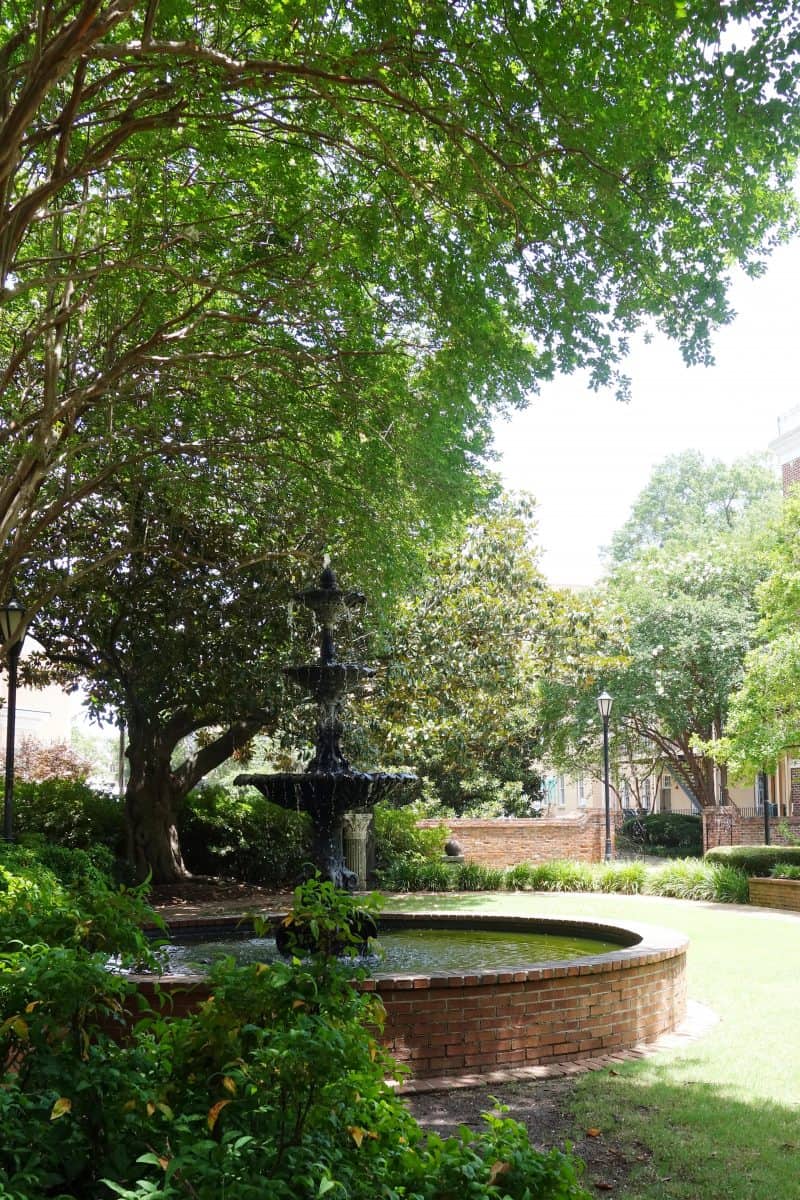 The brick wall around the Horseshoe originally stood at almost seven feet tall and served both as a line of protection for the Confederate army as well as a means to help prevent fire from spreading to the campus. 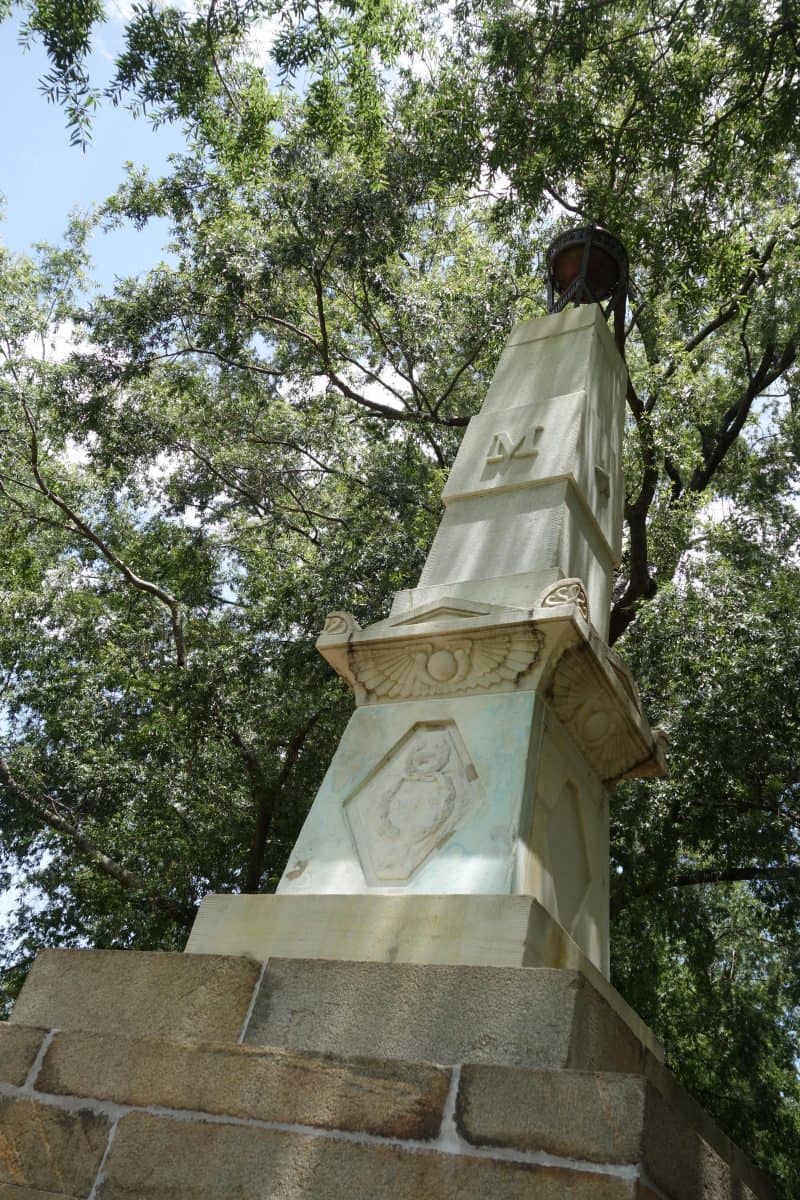 The Horseshoe is lined with gorgeous old buildings.  My favorites were the 1854 President’s House and the 1840 South Carolina Library, the first freestanding college library in the country. 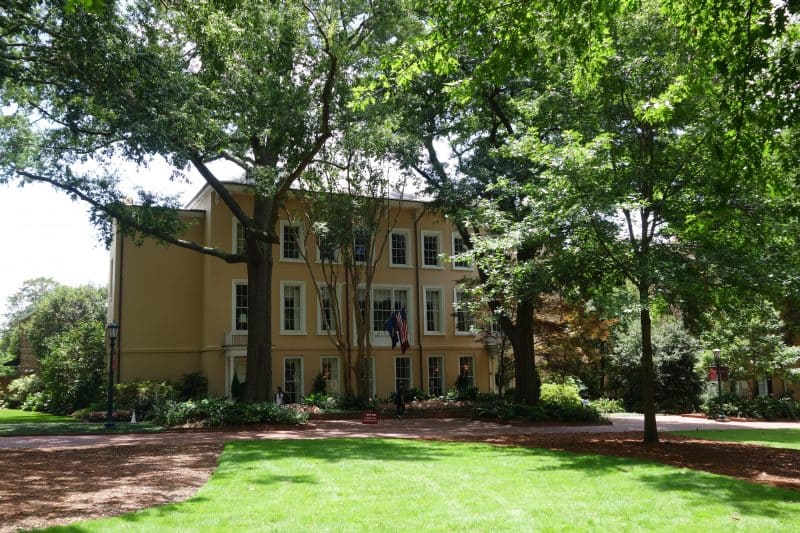 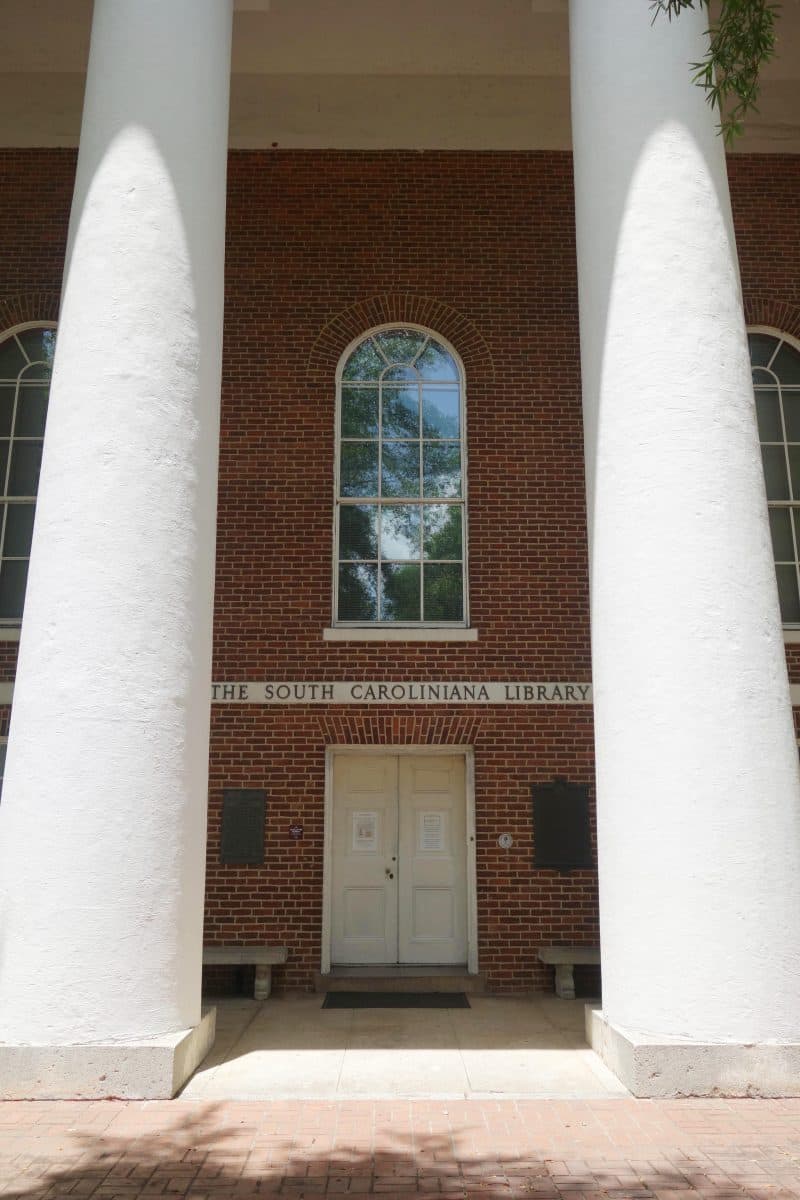 After walking the Horseshoe, we headed just a block away to the South Carolina State House,  the seat of the state’s executive and legislative branches of government. 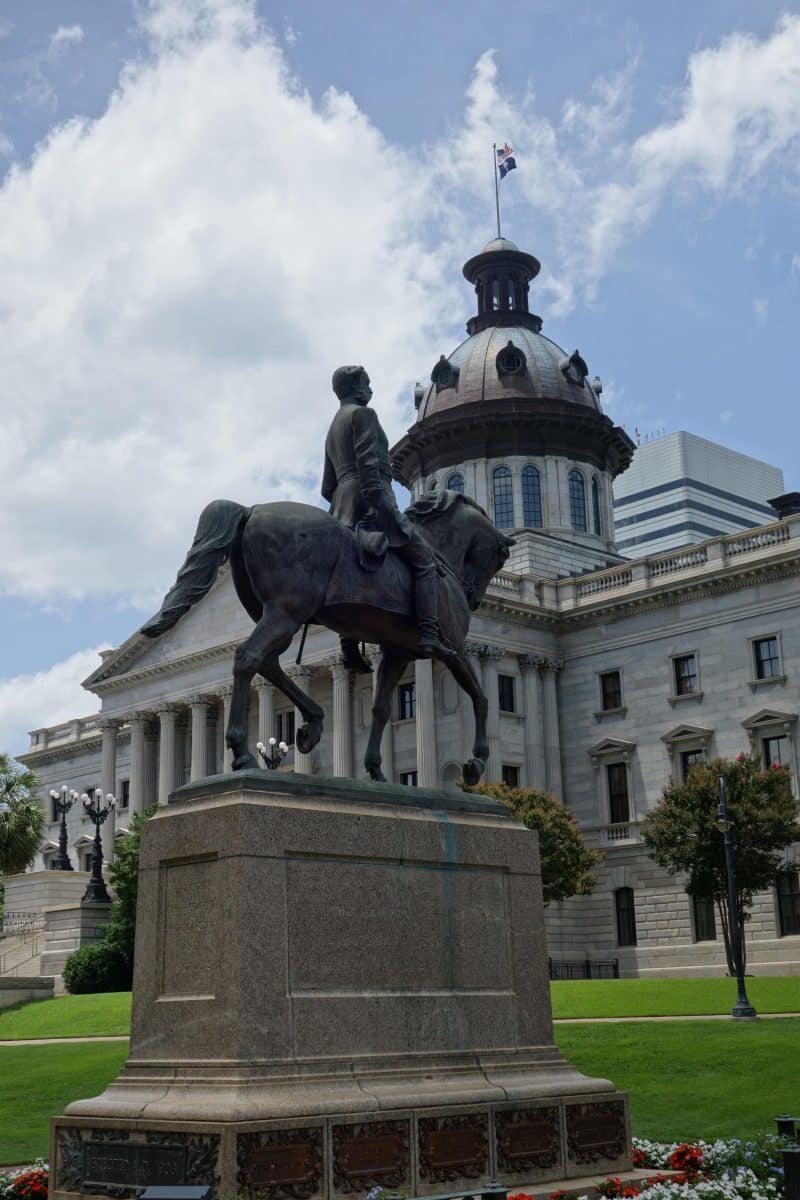 The State House itself is quite striking.  Construction began in 1855 and was halted by the Civil War.  For more than 150 years, five architects worked to complete the building with the latest renovations ending in 1998. 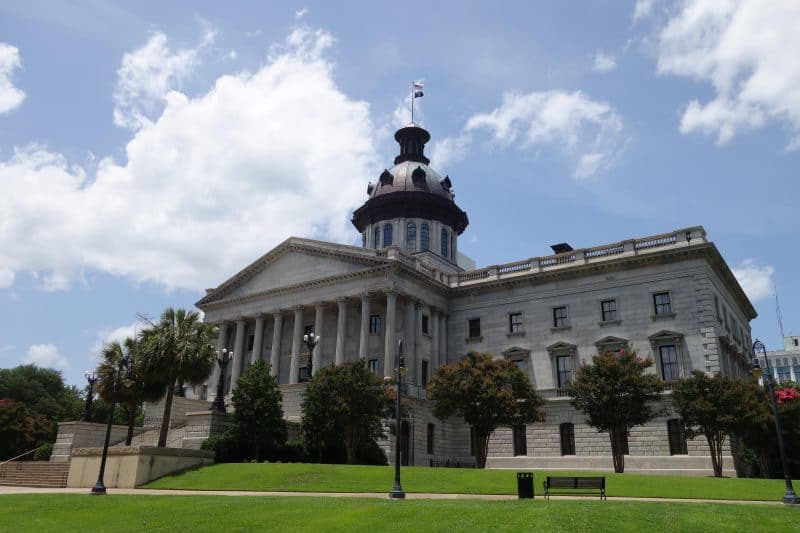 The entrance to the building is around the side, so the boys enjoyed a race to the top of the front stairs and back down without disrupting any kind of official business.  The columns are each carved from a single piece of stone and are believed to be the largest monolithic columns used in a public building in the US! 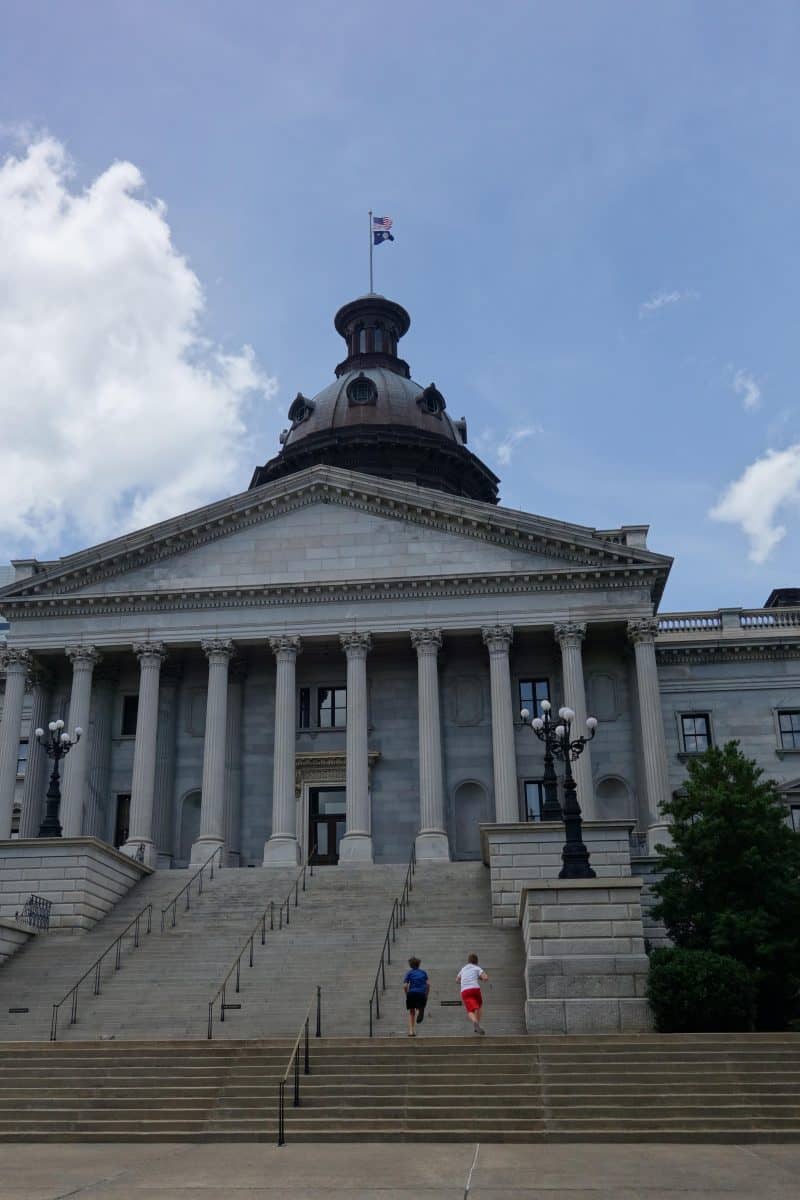 Around the exterior of the building you will see six bronze stars marking the places where shells from Sherman’s cannons damaged the building in February 1865.  There is also a lovely monument  tracing African-American history from the Middle Passage, to the fight for freedom in the Civil War, the struggle for civil rights and emergence into mainstream America. 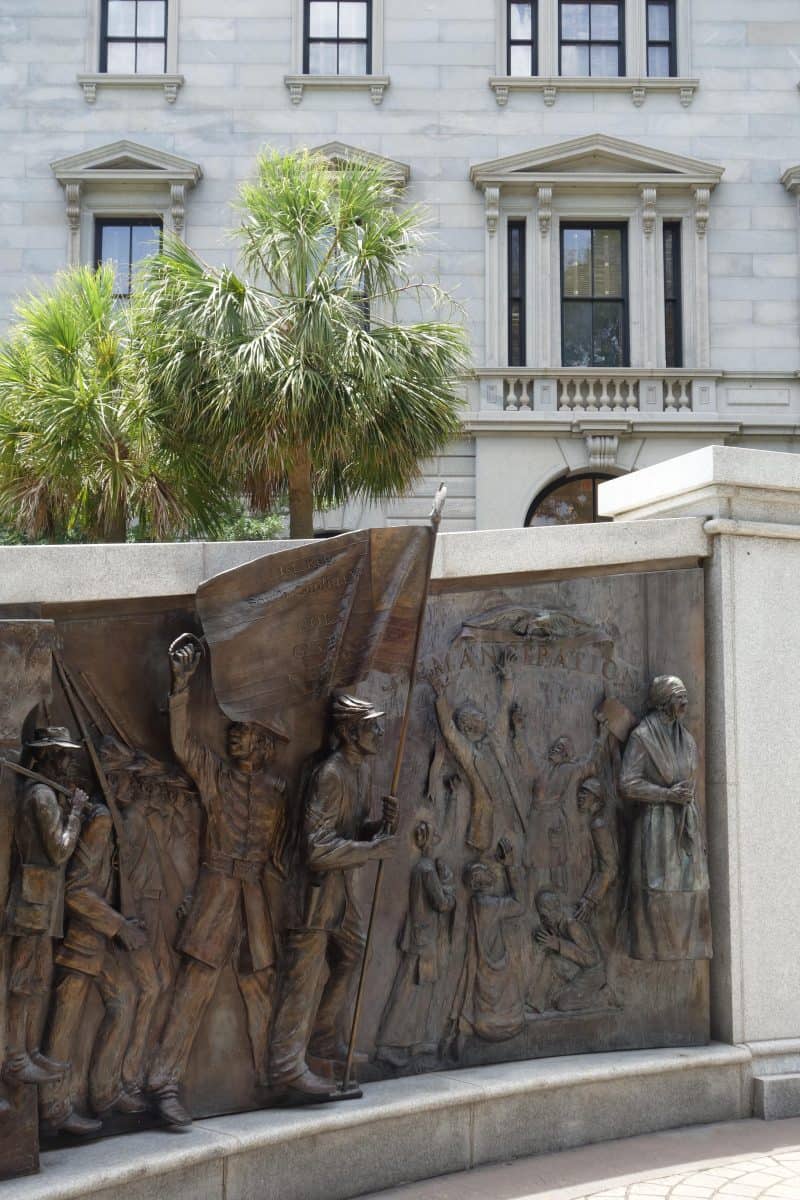 After exploring the exterior, we were finally greeted with the most incredible blast of air conditioning I might have ever felt :-)  Free guided and self-guided tours are available Monday – Friday with times varying based on whether or not legislature is in session.  We arrived just in time to hop in on one and were SO glad that we did.  The main lobby was quite striking and, like many antebellum-era state houses, is designed in the shape of a cross where each body of the legislature has their own wing. 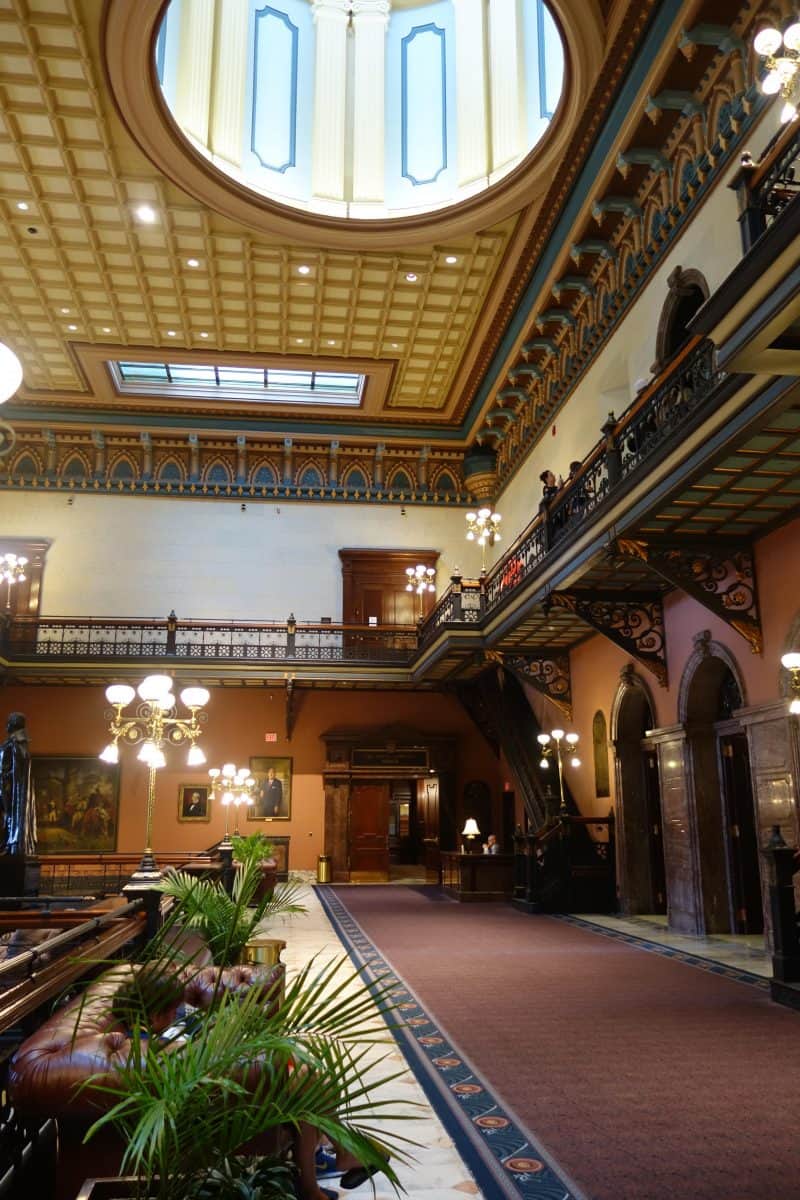 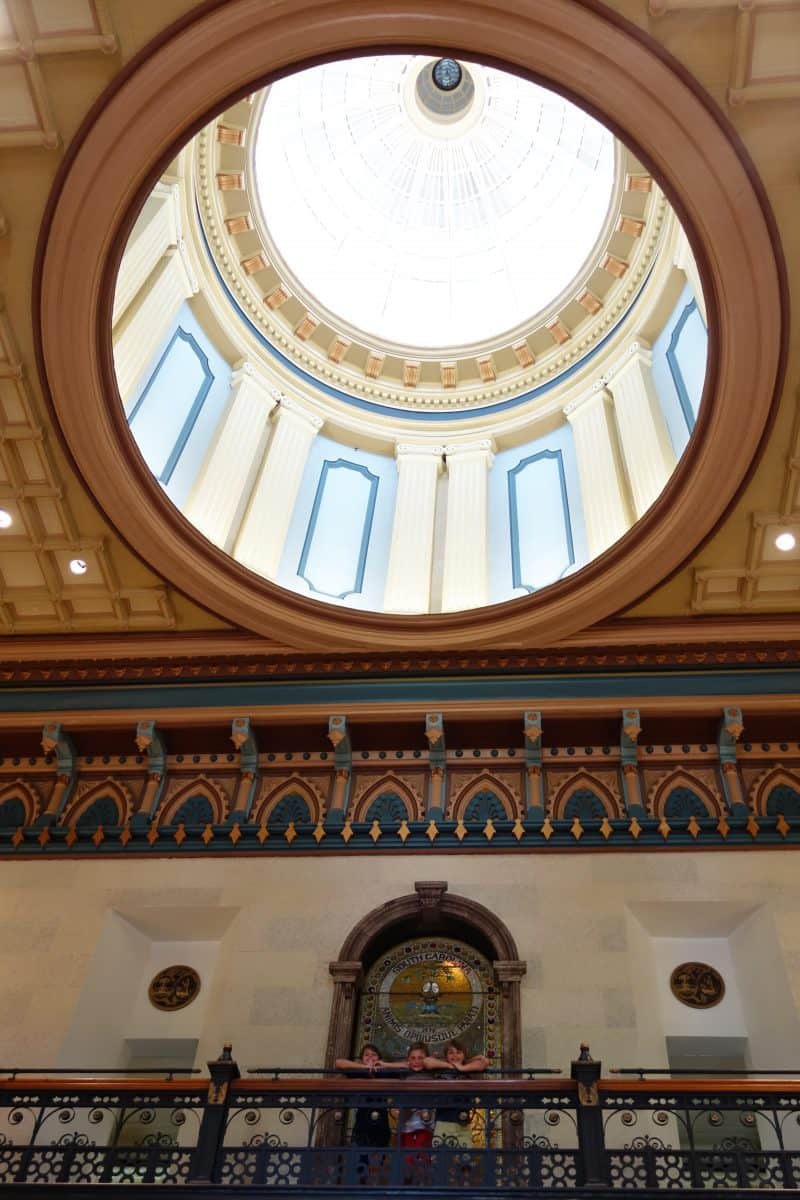 We first entered the Senate Chamber and learned how senators are seated by political party and seniority.  We loved hearing how The Sword of State represents the authority of the Senate and when it is placed in the brackets on the front of the desk the original lamps on each side of the desk are turned on!  The presence of the sword symbolizes the Senate is in session. 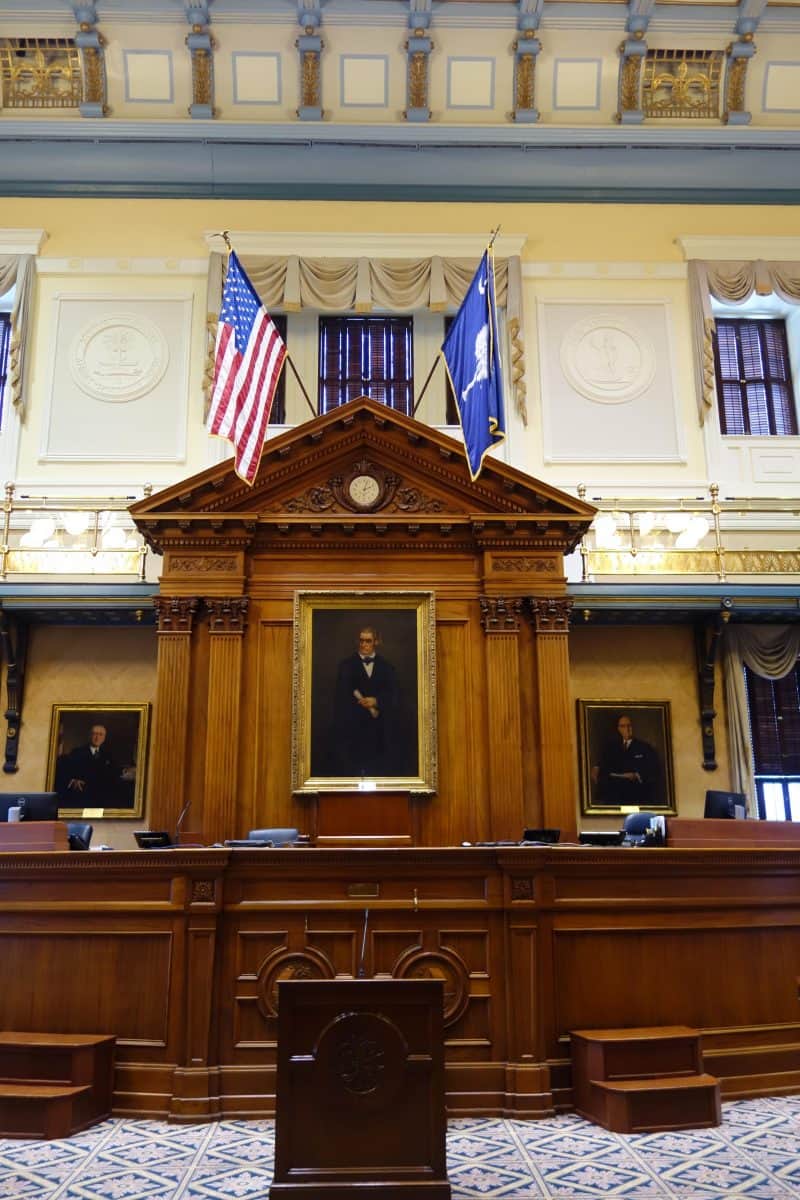 Over in the House Chamber members are seated by county.  One fascinating thing we learned here was about the state mace – dating from 1756, this is the oldest original mace used in the US.  It is pictured in the illuminated box on the left side of the desk.  Like in the Senate, when the sergeant at arms places the mace on the front of the desk it is known that House is in session.  The mace was hidden during the American Revolution and then lost for 40 years before turning up in a Philadelphia bank vault! 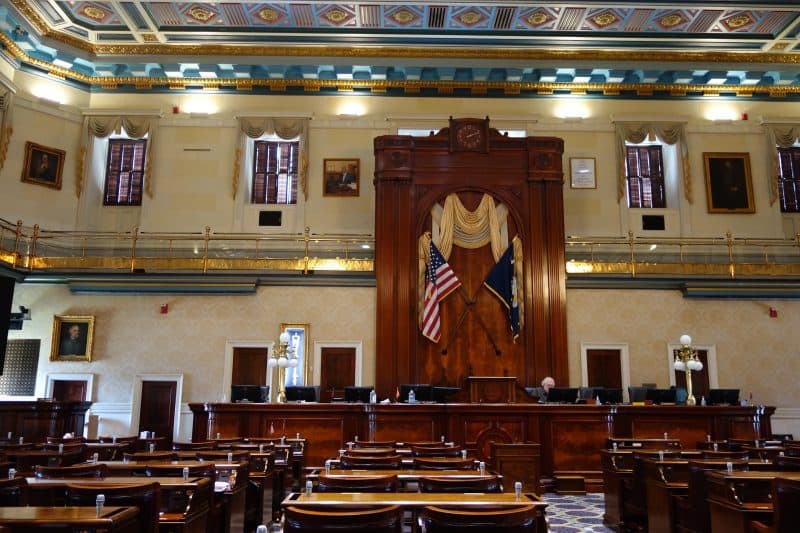 We enjoyed hearing all about how the representatives use the buttons at their desks to vote Yays and Nays. As votes come in, the names of each representative change colors based on their vote.   They can also seek assistance from pages and IT right at their desks – as well as charge their devices :-) 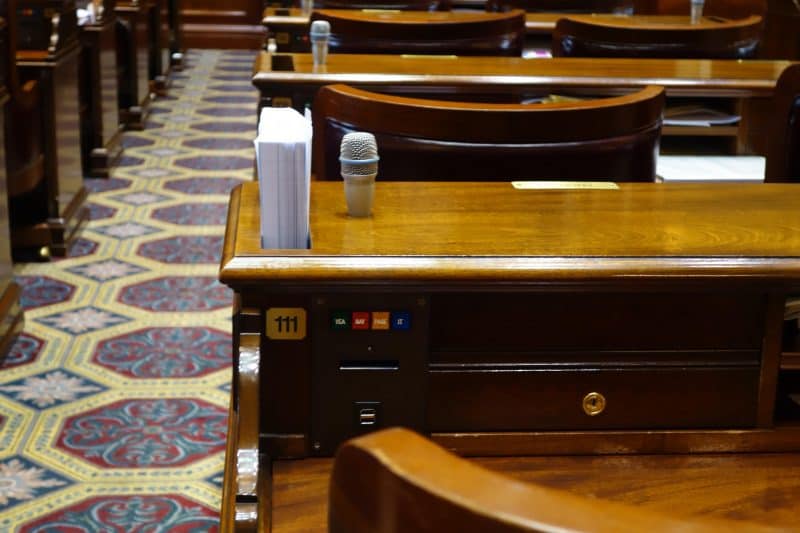 Lastly, the Joint Legislative Conference Room is located off of the main lobby between the two chambers.  This is the only room in the building that has remained original – even the chandelier that was once gas lit is in tact! 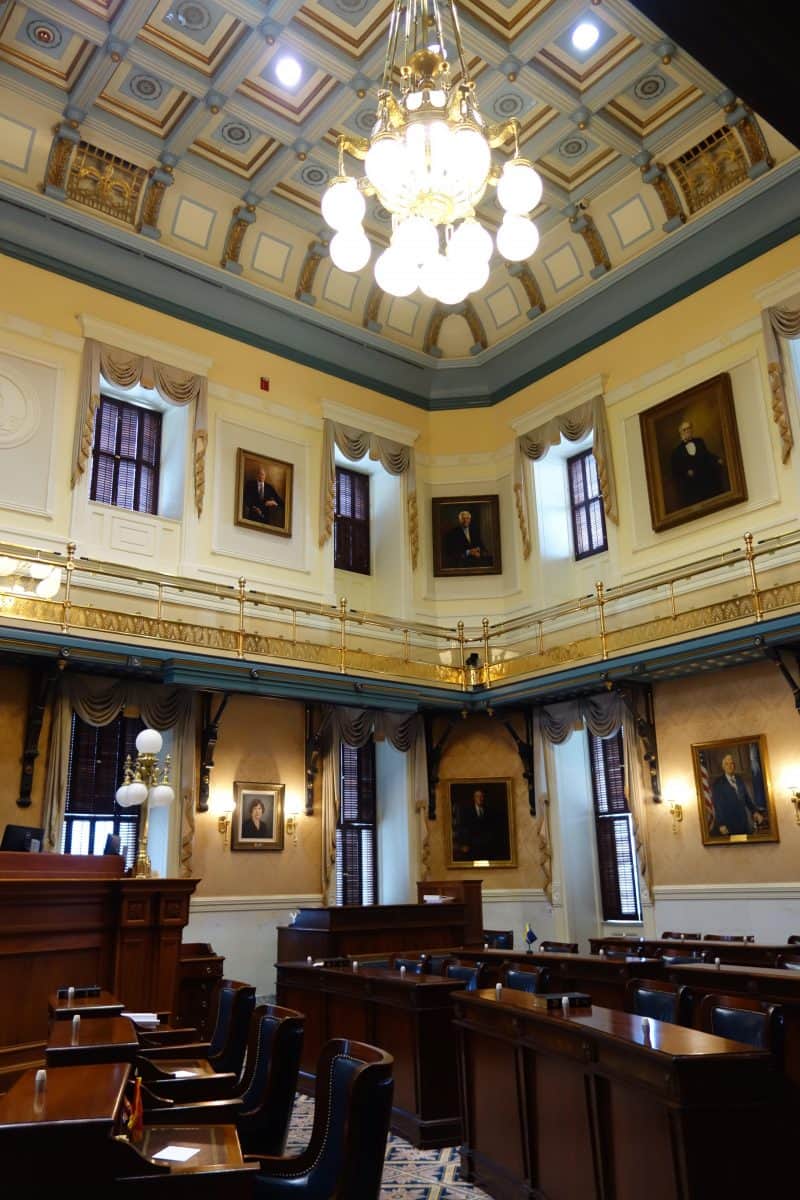 I’ll be back tomorrow with the next installment!!

in collaboration with
Experience Columbia