A couple of weeks ago I headed out with some girls to see Garth at Atlanta’s brand new Mercedes Benz stadium! 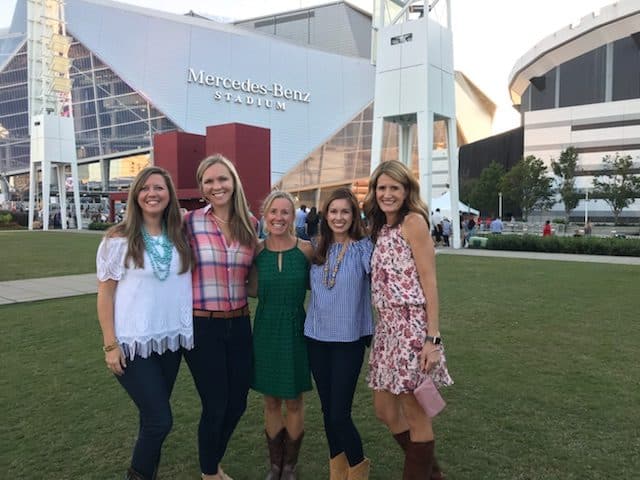 One of the husbands in our crew was able to get us in gratis to Molly B’s Cookhouse for dinner!!

So, here’s the deal… for Atlanta Falcons and Atlanta United, Molly B’s is a membership only club where members have the exclusive opportunity to make dining reservations for the restaurant during games.  BUT, during concerts (I would guess this will hold true for future concerts) it is open for reservations to all fans with a ticket to the show.  Reservations can be made on Open Table and for Garth it was $100 per person for pretty much all you can eat.  We started with rolls, a relish board and a chopped salad, all served family style.  Next we headed to the action stations with a carving station and raw bar.  We chose to do our sides and entrees family style and just ordered a variety of things for the table including fried chicken, ribs, salmon, brisket and roasted chicken.  Everything was really good and we FULLY enjoyed ourselves. 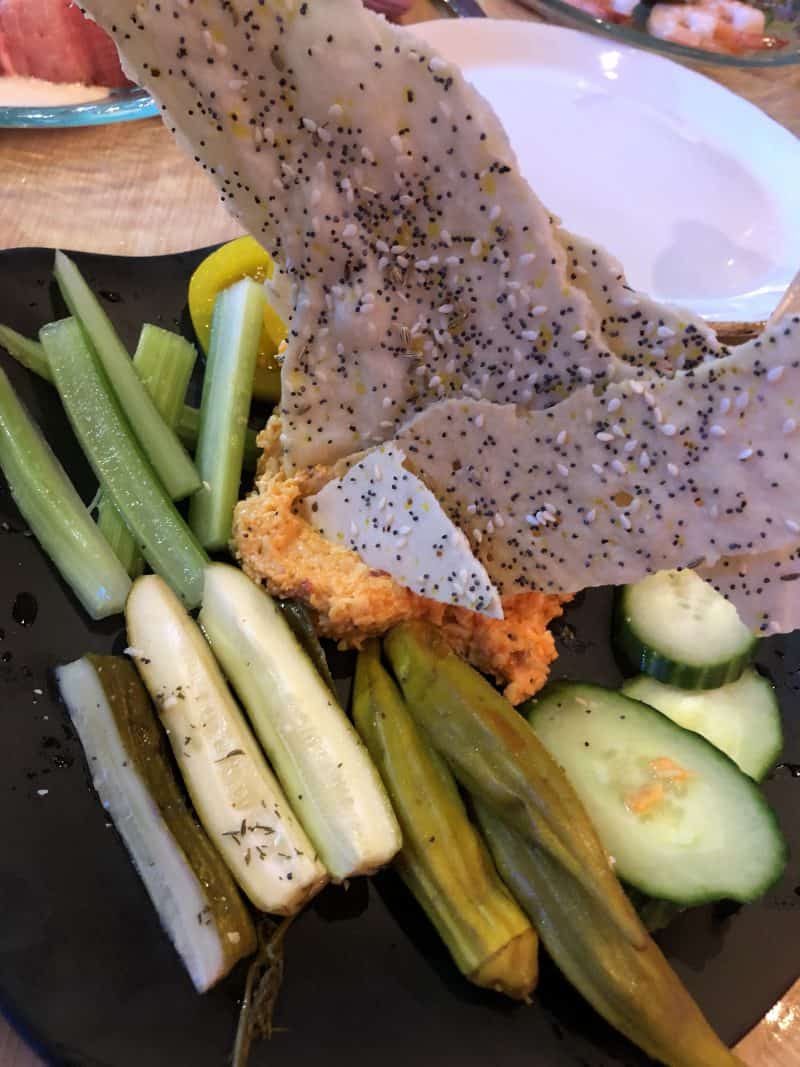 The view is really top notch and, since we had seats in the two-hundred-something section, we were in no rush to leave.  Our service was somewhat slow, but we made it known that we were in no rush.  Our server was extremely friendly and definitely took care of us.  Oh, we were so wrapped up in our fun that we didn’t even notice Jimmy Carter dining a table over.  One of the girls put two and two together when he took the stage. 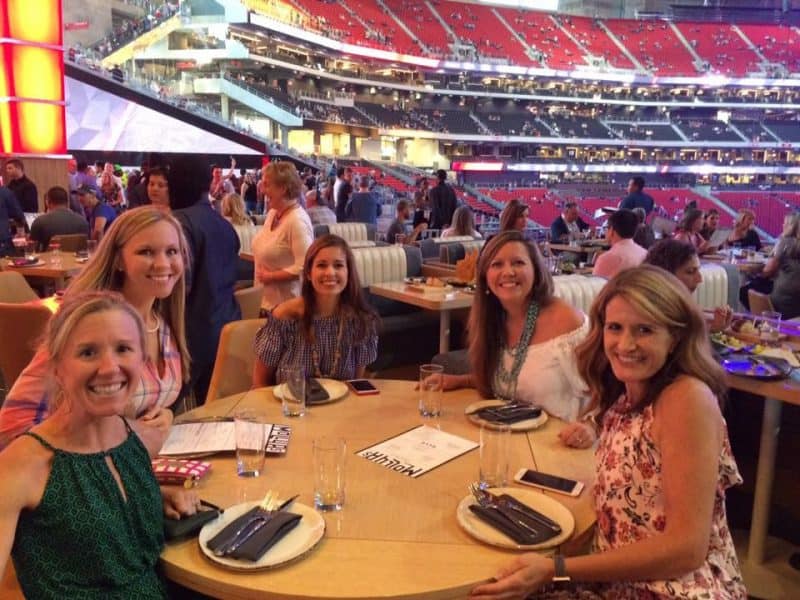 In fact, after we finally finished eating the place had started to clear out.  One of our girls was meeting up with a different group so we were down to four and this table had just opened up.  They let us move and we ended up never leaving here to go to our seats. I mean, why would we?!  HA!  While our meals were courtesy of the chef, not one of us would hesitate to book this again especially when your actual seats are not very good. 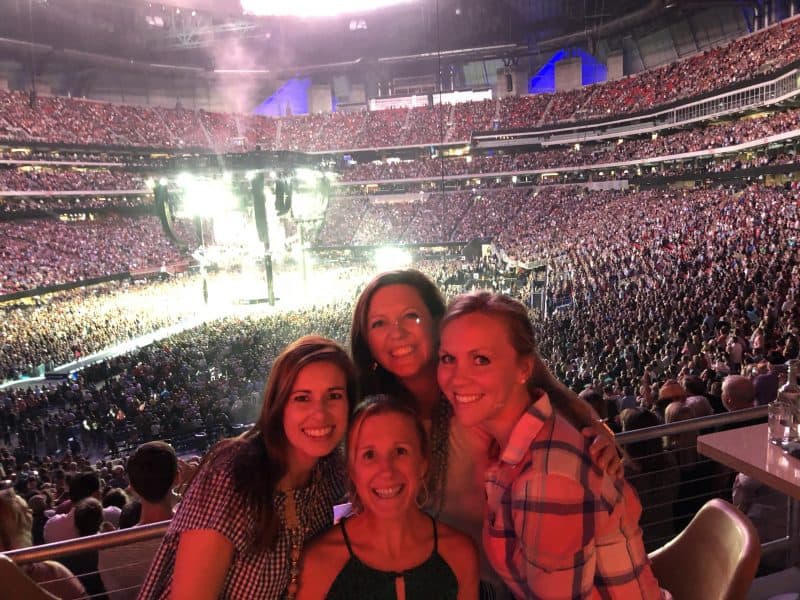 As for the concert itself.  Wellllll, Garth was the very first concert in our new venue and the sound quality was absolutely horrendous.  I am surprised that neither Garth nor the stadium have addressed it.    Luckily we knew every word – and the prosecco was flowing – so it didn’t damper our fun in the least.  And, while it sounded awful, the stadium itself is gorgeous.  I loved it when the fans turned on their cell phone lights.  I guess my kids will never really know the whole lighter – concert thing. 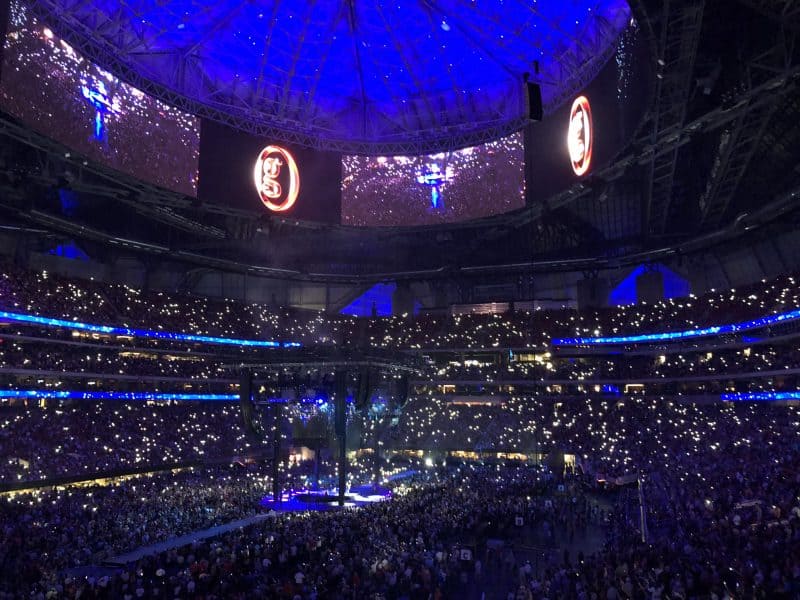 Thank you to LE’s husband and Molly B’s for dinner.  It was a fantastic night!

PS. My top and necklace are from Willow Park Boutique.  I love everything I have from them!!