I was in a real pickle over what to do about our long standing (six years!) last day of school “special snack” tradition.  With the kids in different schools coming home at different times PLUS that fact that they want to immediately hang with their friends (I get it), I decided we’d all be better off with a celebratory breakfast instead of an after school snack.  I set almost everything up the night before but still got up about 30 minutes earlier than usual to put the food out and add the finishing touches.  We did have to drag John out of bed early, but he proclaimed it worthwhile.  :-)

Knowing that we were going to be surprising them with their first real trip to Universal for ALL things Harry Potter, I decided to go with that theme.  We are all huge fans and I already had everything but the candles from previous events and even school projects.  It took a bit of time to wrangle it all up from their rooms and the basement, but it came out even better than I had envisioned.

They came downstairs on their last day of school to find this!!!!! 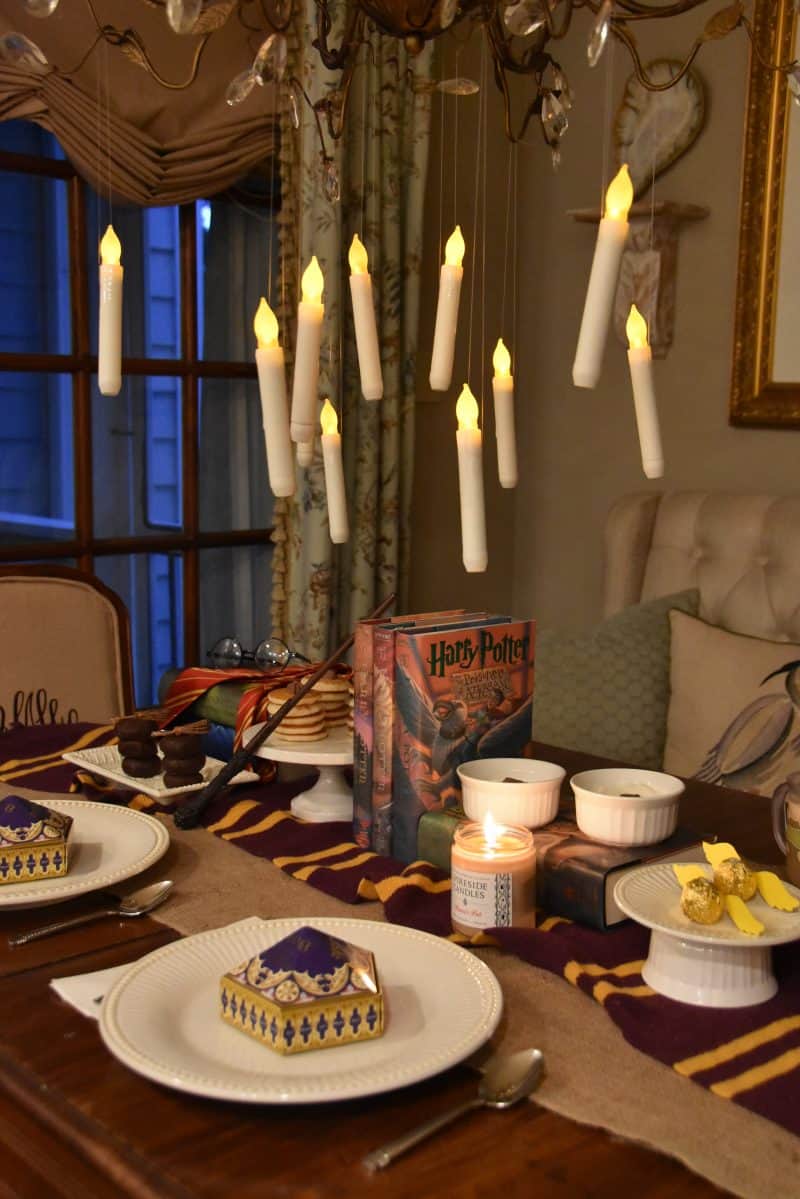 I ordered these battery operated candles which I think made the whole thing!  They each require two AA batteries, so plan accordingly.  I cut fishing wire in different lengths and tied the ends together to form a loop for each candle.  I used clear scotch tape to tape it to the candles and then hung them from my chandelier.  The effect was magical!  I also got the Harry Potter score from Apple Music and had that playing on my phone. 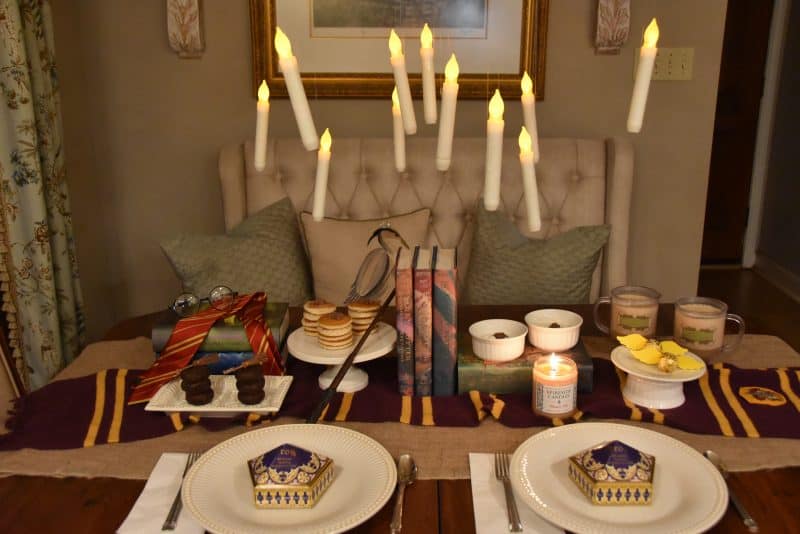 For the centerpiece I gathered things around the house.  I started with a piece of burlap for the runner and then layered on (my) Gryffindor Scarf.  I LOVE Spireside Candles and used their Wizard’s Pub candle to add the delicious scent of butterbeer.  I added glasses, a Gryffindor tie and Harry’s wand and used our Harry Potter books to create height on the table.

We have THIS Harry Potter costume and THIS accessory set.  John chose the wand at a special event at Ollivander’s years ago and we will let Whit choose his on our trip! 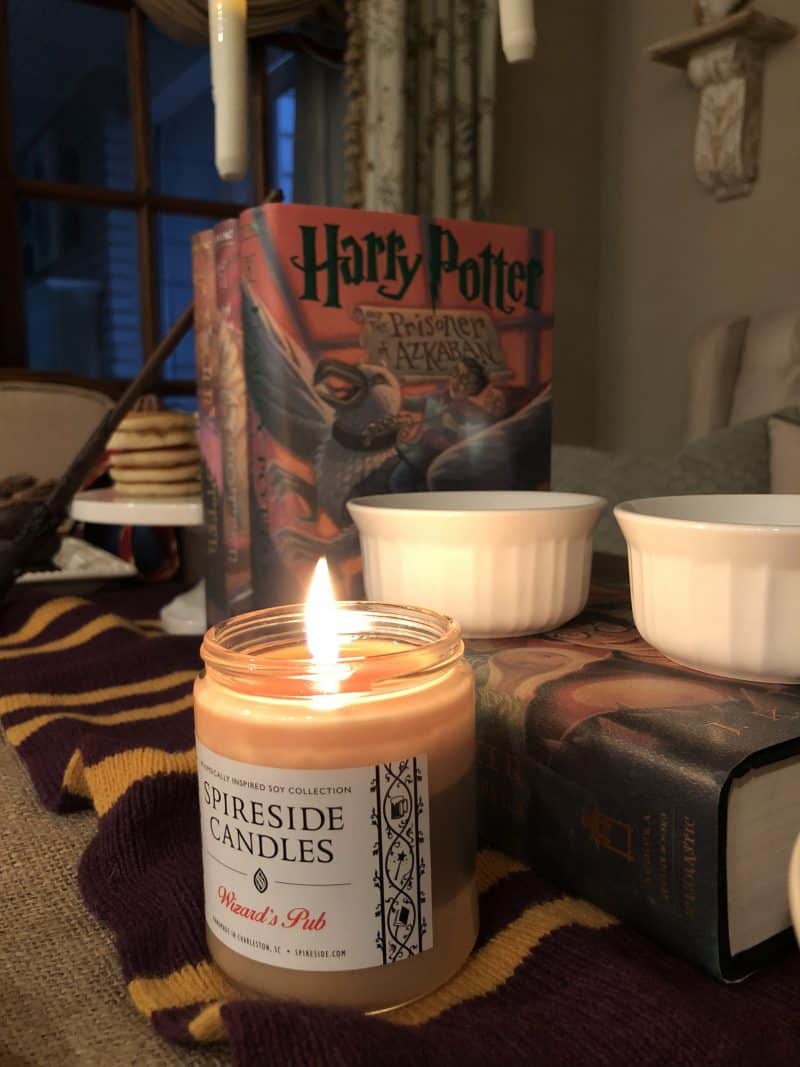 I knew I needed a really easy menu to pull this thing off before school.  I served mini donuts with little broom sticks on top of each stack, stacks of mini pancakes with Fudge Flies, golden snitch chocolates, butterbeer and greek yogurt with Fudge Flies.  Not the most well balanced meal but you know, it was kind of a party.  (This menu coming from the girl that complained about velveeta…. ha) 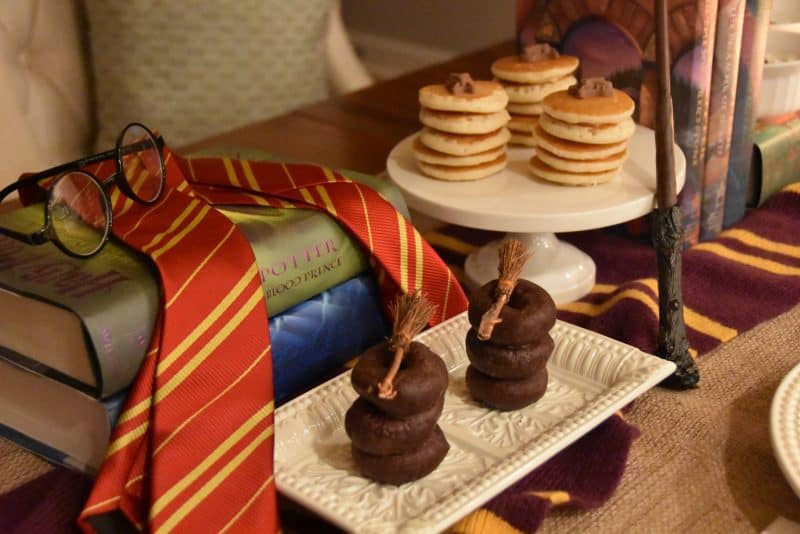 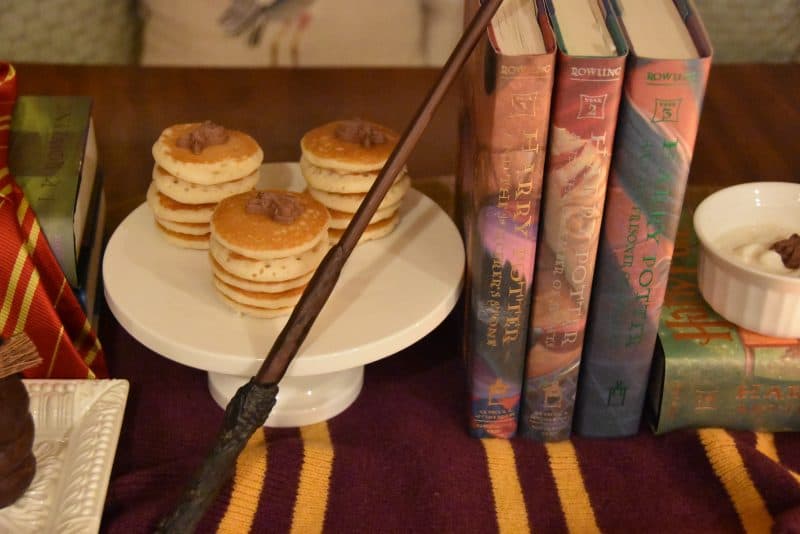 To make the golden snitch chocolates, I started with Ferrero Rocher chocolates, took them out of their brown bottom wrapper, and used a glue dot to attach wings.  I cut them by hand on yellow cardstock and the whole thing took about 2 minutes.  I found the template on google images but it led to a dead link on Pinterest so I don’t know the original source.  I did combine the single image into a page for easy printing via this link >> Golden Snitch Wings.

I got the butterbeer recipe off of Pinterest as well and it wasn’t very good – especially when you’ve had the real thing.  The kids didn’t even really like it, which says a lot.  I’m not going to share it since I don’t recommend making it.  If you’re looking for recipes, pass on the one called Hogsmeade’s Finest Butterbeer.  :-) 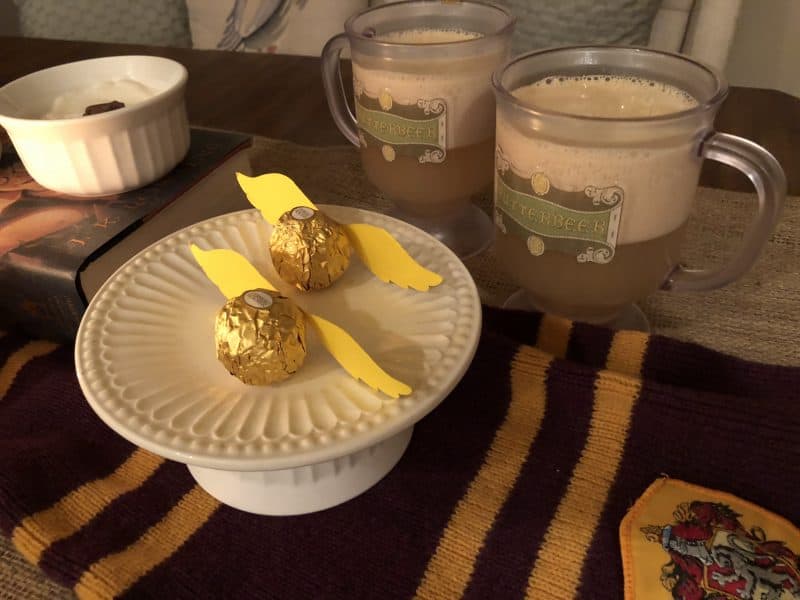 I purchased the Fudge Flies at Honeydukes in the Wizarding World of Harry Potter on my trip to Universal earlier this month for training!  I didn’t know what I would do with them at the time but they came in handy. 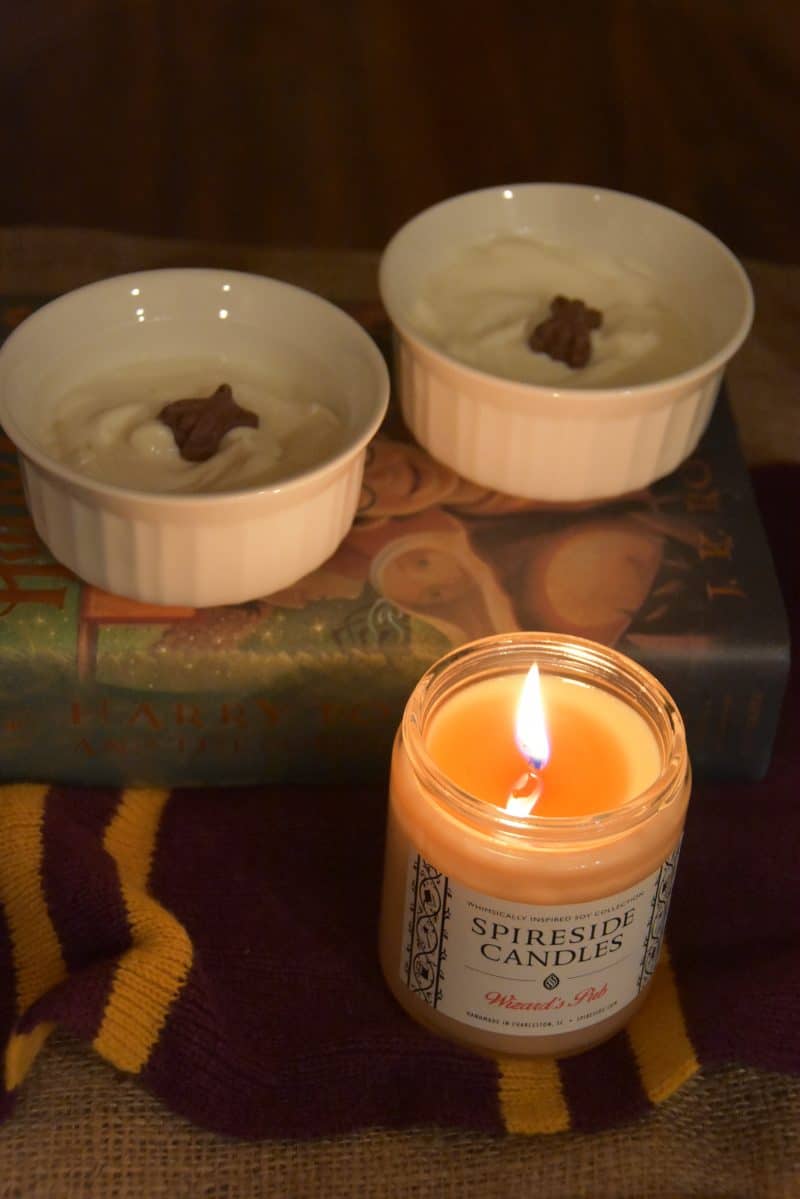 On each of their plates I had a boxed chocolate frog, also from Honeydukes.  This was over the top for them :-)  They couldn’t believe I had found these and how big they were.  They are literally going to be over the moon when we get there if these frogs were any indication.  Speaking of which, we told them the big news as soon as they came in the room – that we were leaving for Universal the very next day – and they were thrilled!!!!!! 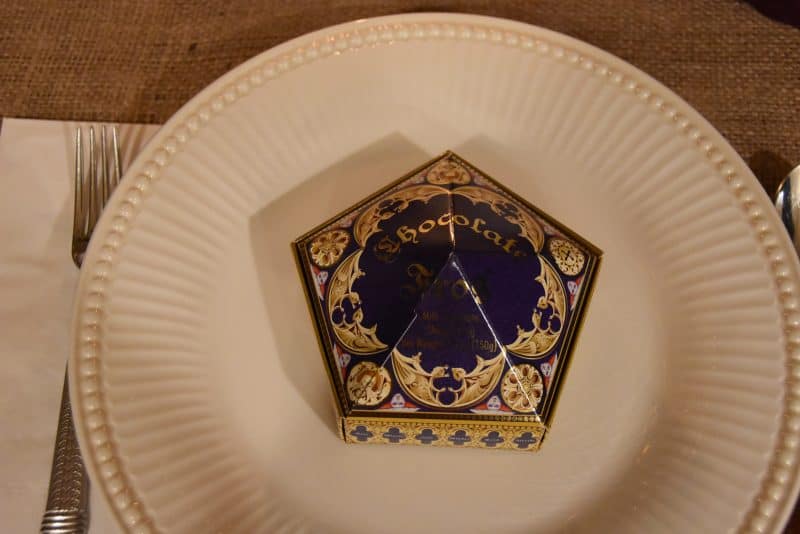 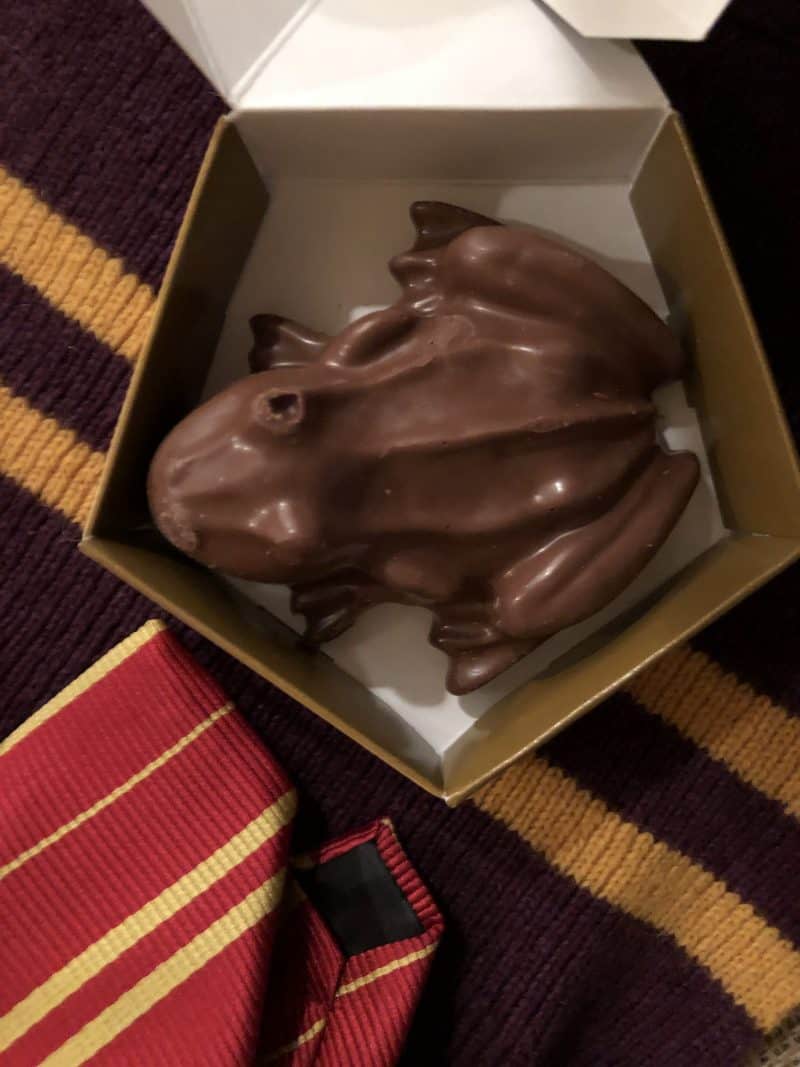 Between the music, floating candles, scent of butterbeer and the surprise, it was a magical and memorable morning before the last day of school.  I am so lucky to call these kids my own.  <3

16 thoughts on “A Harry Potter Breakfast”