Honey and I were so excited to be invited by The Murder Mystery Co. to their dinner show in Atlanta last weekend!  It had been years since we have been to one and even more years since we hosted our own back in the day. 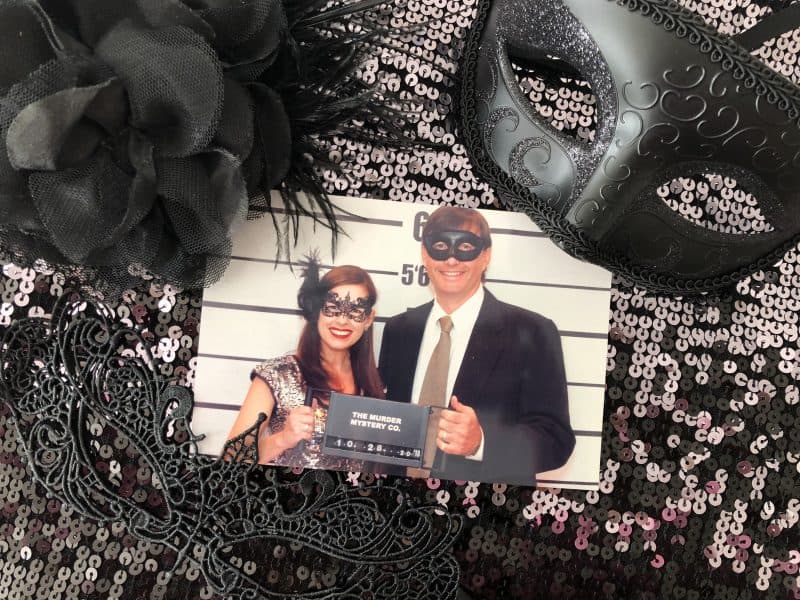 The theme for our evening was Midnight at the Masquerade.  Guests are part of the show and are encouraged to dress up to match the theme.  They provide great suggestions and inspiration for this and we loved seeing that about half of those in attendance were in costume. 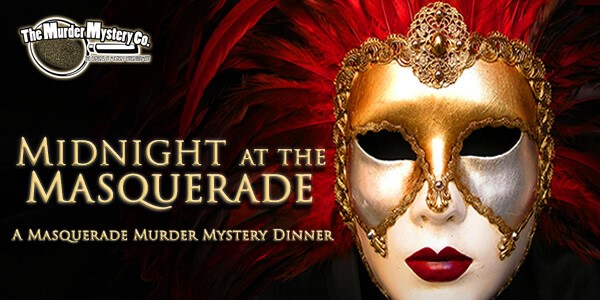 The rustle of silks and feathers under muted conversation was probably the last thing heard by the tragically and unexpectedly deceased at the Billionaires’ Club Annual Masquerade Ball. With a mystery under each feathery façade, unmasking the killer may be quite a challenge. It’s up to you to determine which partygoer is guilty, bring this crime to justice, and save the party!

Attend the Billionaires’ Club Annual Masquerade Ball and help get this soiree back on track by trading clues with your guests, gathering information, and solving the crime before the masked menace gets away! Evening wear, ball gowns, Venetian masks, suits, and tuxes are what to wear to this high class night of masks and murder. Get ready for a glamorous evening of mystery, intrigue, and murder.

We were greeted at the door by Luna Tick the Maid and we knew we were in for a treat.  After snapping our mug shots, we were led to a table with our new teammates.  While we ate our salads and ordered drinks, other cast were walking around and interacting with us. 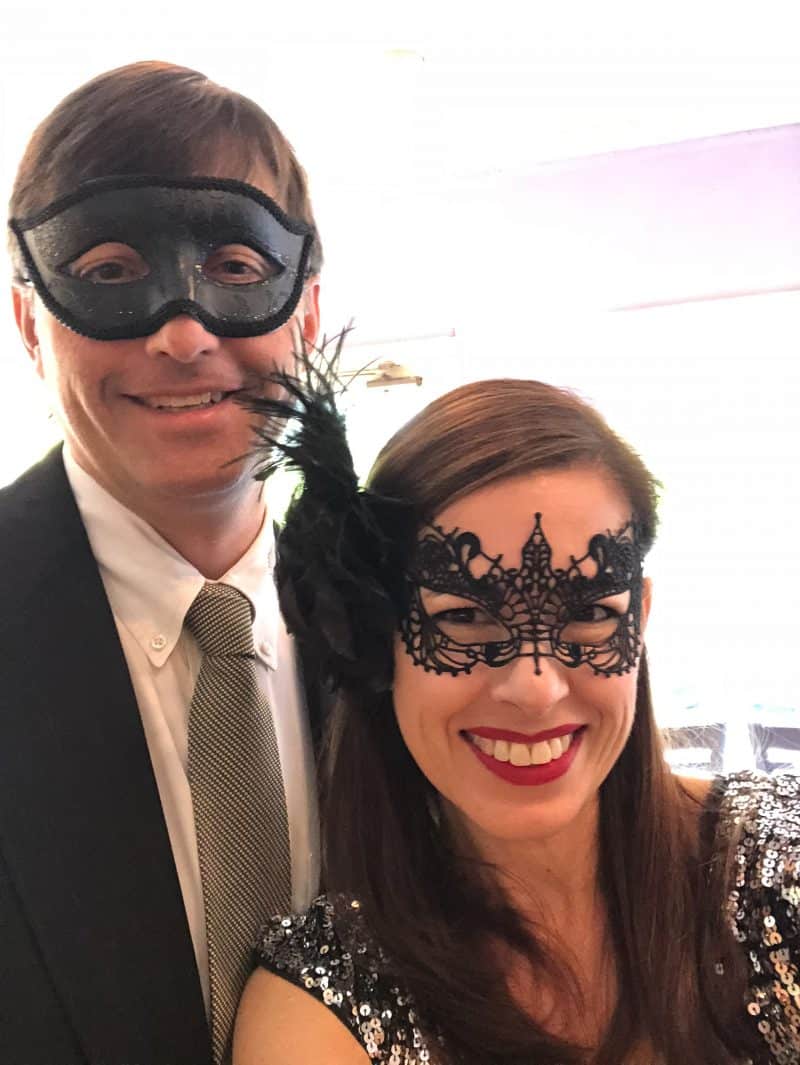 Once everyone was seated we received instructions on how the evening would go.  We were told that the people sitting at our tables were our teams, and that we would be working together to solve the evening’s interactive mystery.  The cast chose one to two people from each team to join the crew and play a suspect.  I couldn’t believe it when I landed the role of Dr. Feelgood! 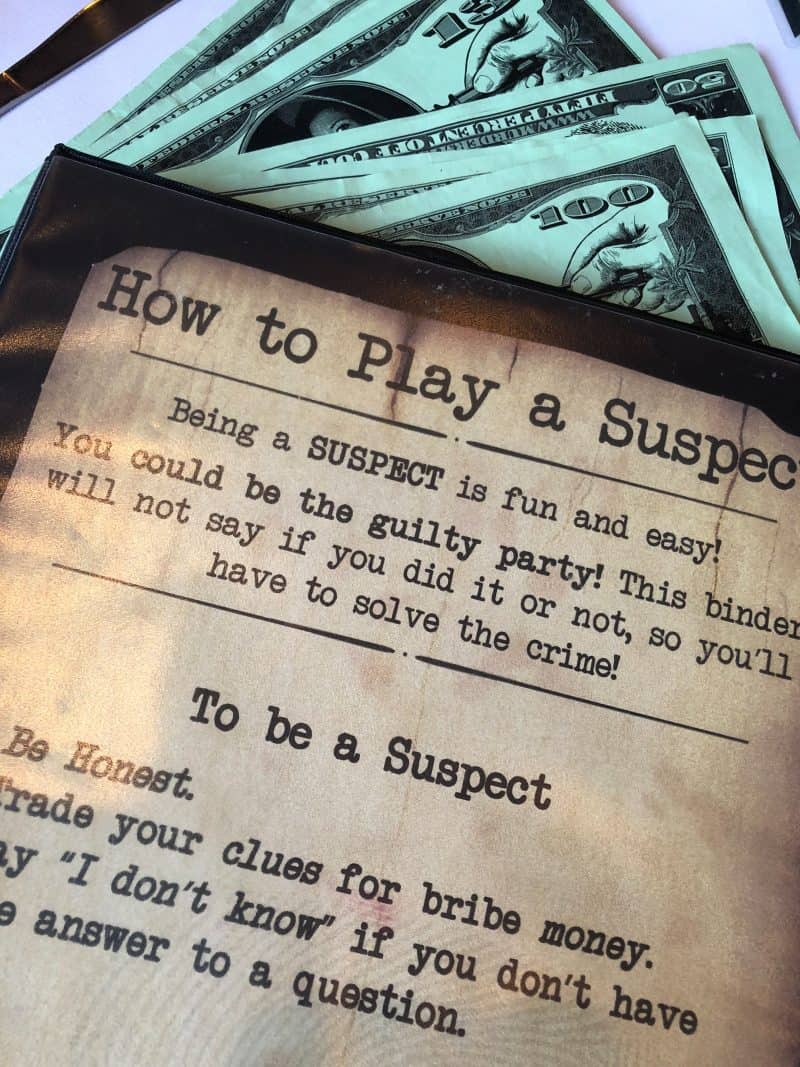 Being a suspect was easy and fun and we had another one in our group as well.  Don’t worry – if you don’t like the spot light, you don’t have to be in it! 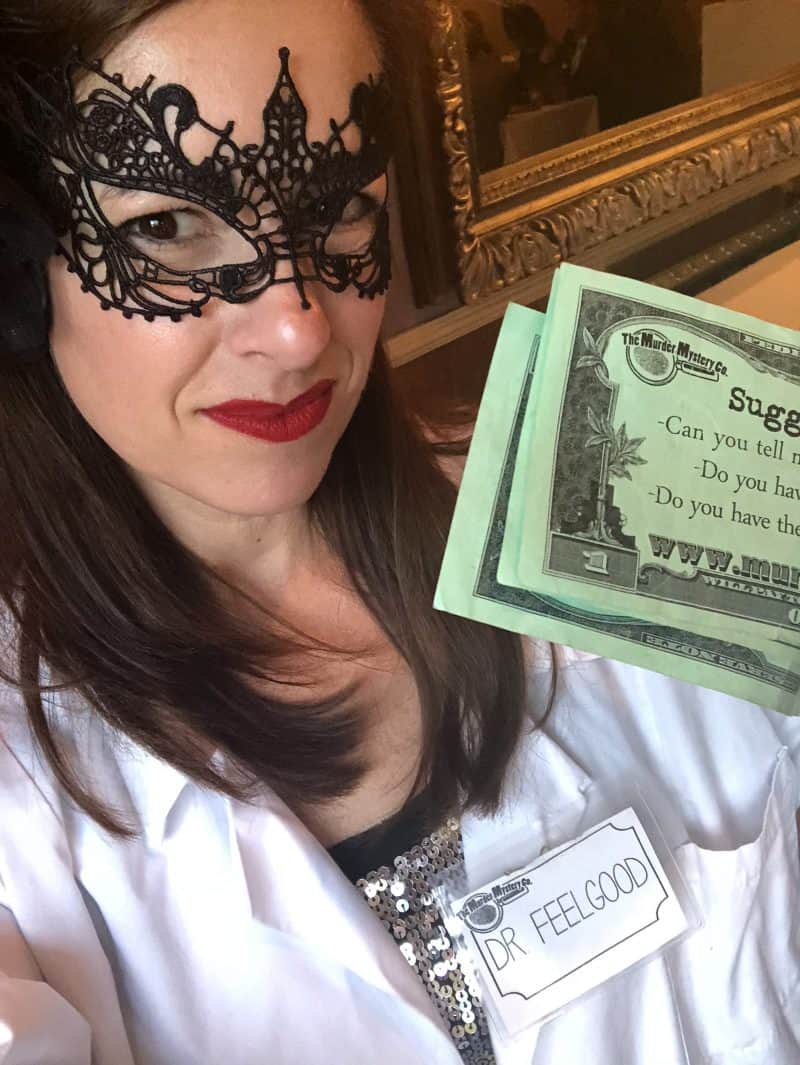 In between courses, all of the guests mingled and collected clues to solve the mystery.  Speaking of dinner, our menu included a greek salad, your choice of 1/2 lemon chicken, roast lamb, or gemista (vegetarian), and tiramisu for dessert.  Everything was good.

At the end of the night, each team submitted their final accusation, if you will.  One team came away winners!  It was not our team, but I did receive the Best Actress award.  She wrote in “single” because that was a key part of my role.  :-) 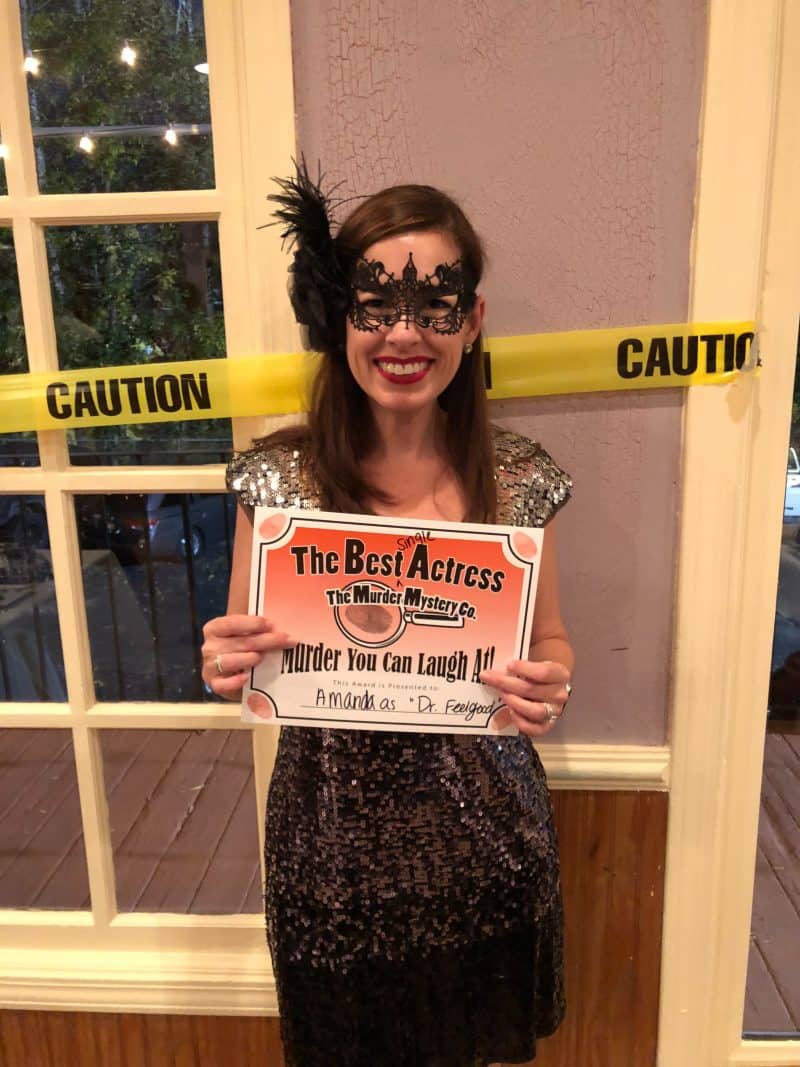 Again, we had a marvelous night and were flattered to be invited to the event.  The murder mystery was just the right amount of fun, comedy, interaction and intrigue. We went just on date night, but there was a 40th birthday party in attendance as well as some other smaller groups.  It would be such a unique way to celebrate.

The Murder Mystery Company serves up dinner and devious murder at weekly public shows and private parties across the country, so this isn’t something limited to Atlanta.  I am already thinking about how much fun their Christmas mystery would be!!

One thought on “The Murder Mystery Co {Midnight at the Masquerade}”