We spent our last day knocking out the final items on John’s NYC wish list before heading home earlier this evening. 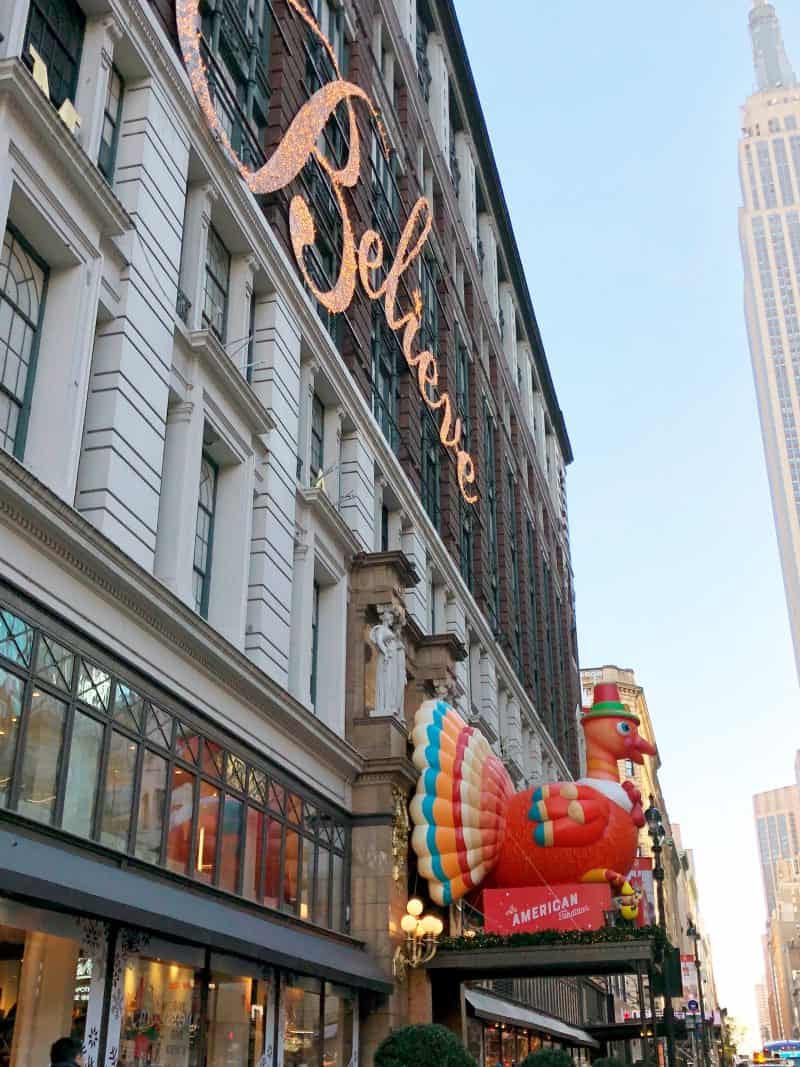 Everything inside all of the department stores was so pretty.  I didn’t torment the boys with shopping, but we did peek our heads inside to see them.  It was fun to have a reason to finally walk through one. 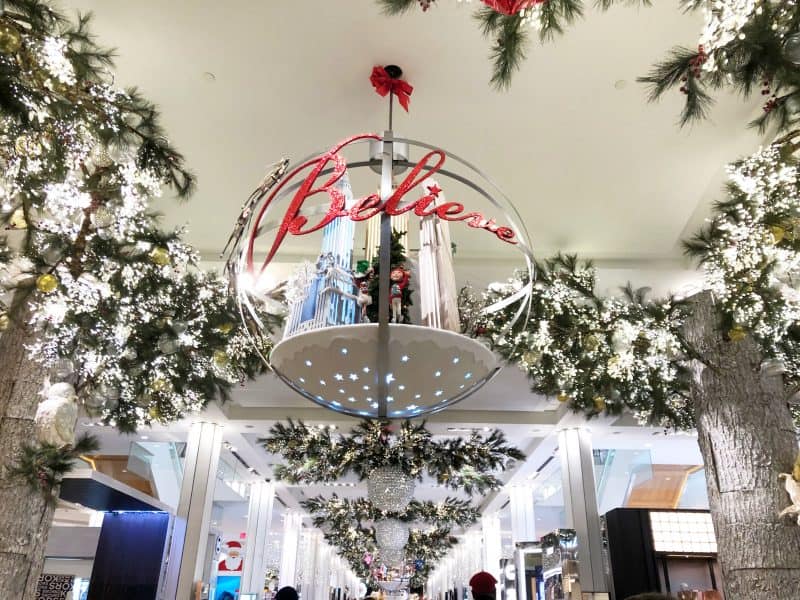 The queue was an experience in and of itself and was so cheerful to walk through. 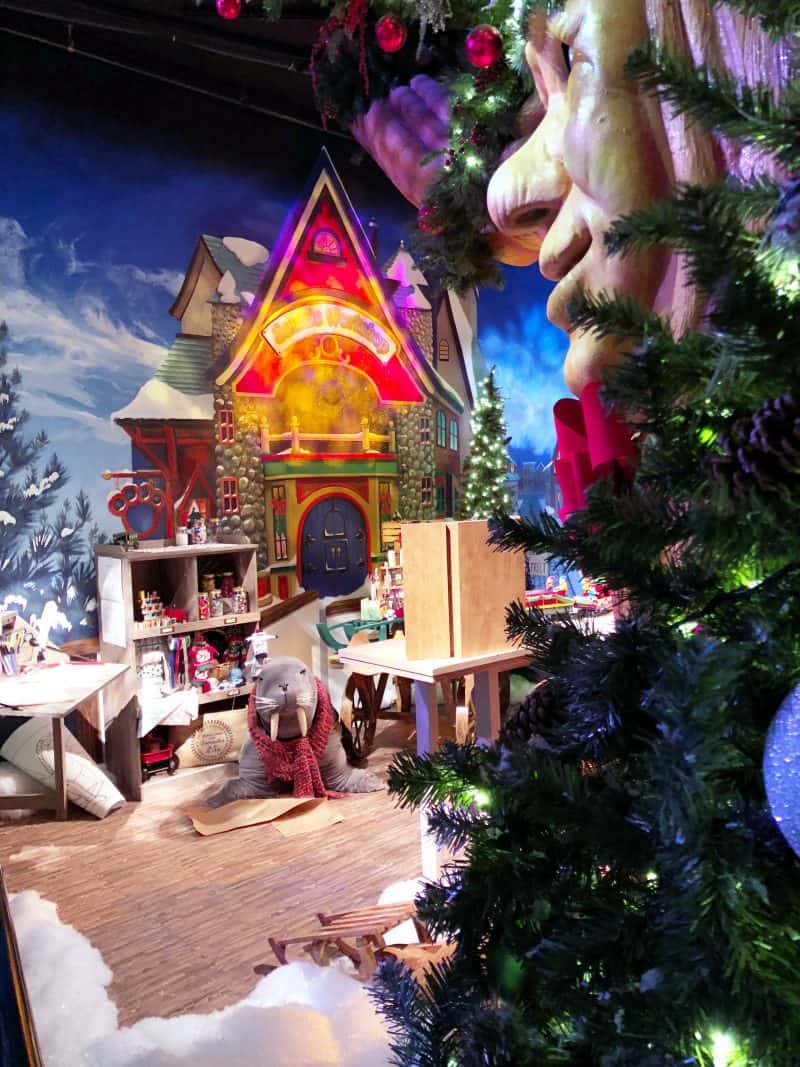 Now, I feel awful for saying this, but I think our Santa at home is so much prettier and just jollier in general, but hey, I’m pretty certain we will never get the chance to do this again.  It kills me that the boys are wearing sweats, but it was so cold outside and we had to dress for the day – including the plane ride home – so I let it go. 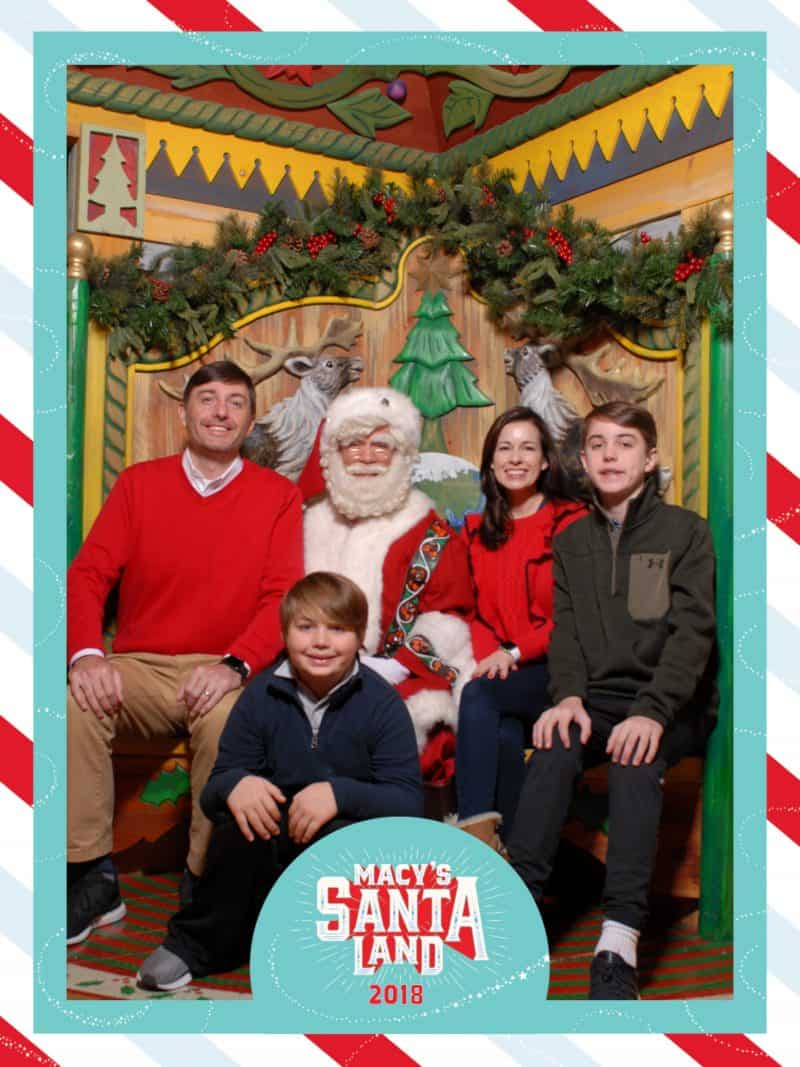 The rest of our morning was spent finishing up John’s NYC wish list.  I loved just walking around the hustle and bustle of the holiday crowds.  Everything in the city was so pretty and festive! 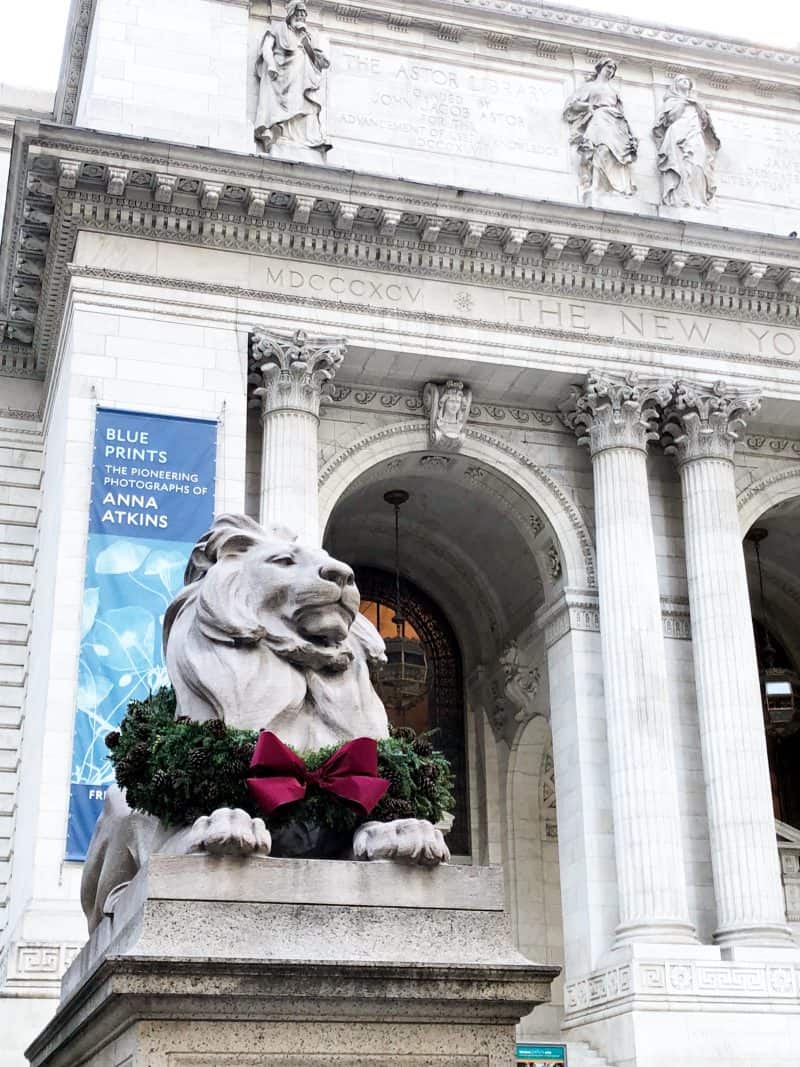 Our first stop was do.  I was so happy to see that they had a pop up in the Bryant Park Winter Village.  We arrived at opening and had cookie dough for breakfast.  Why not?!  It was delicious and John was thrilled to finally make it here.  We tried Thanksgiving night but it was already closed so we ended up just getting ramen and dumplings to-go from the next stall down. 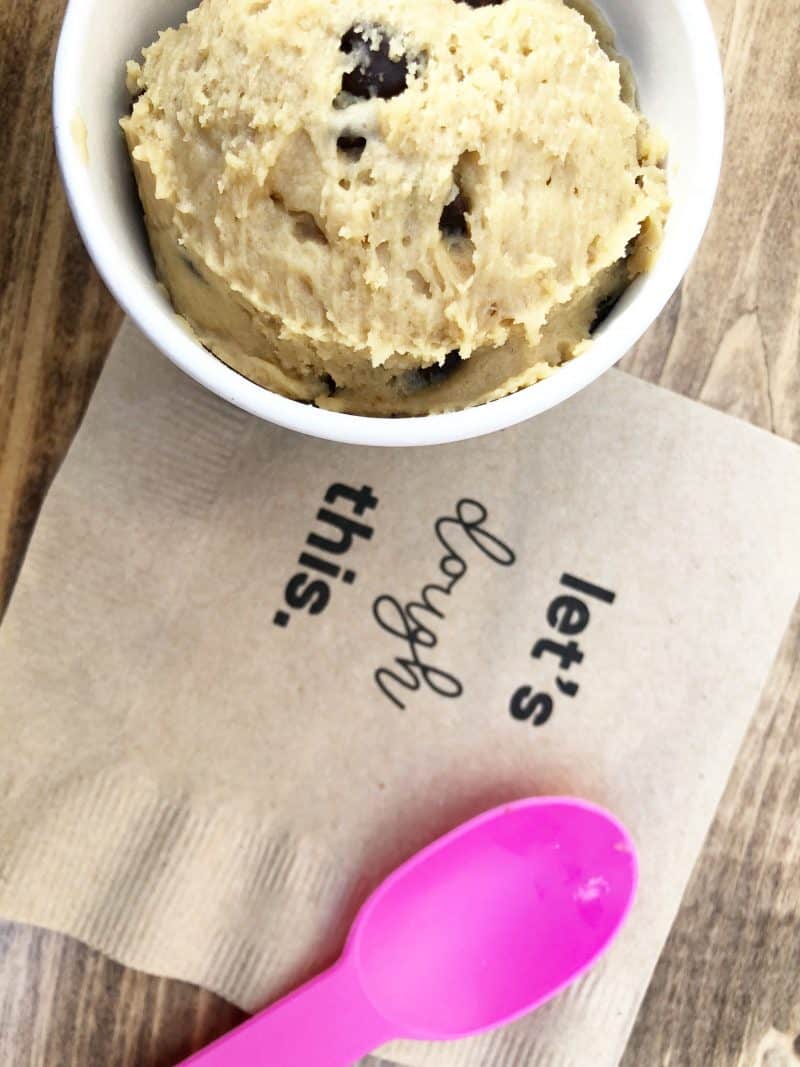 He had been eyeing the NBA Superstore on 5th since we took The Ride and he spied it.  It was closed on Thanksgiving, so we joined in with the crazy Black Friday crowds for him to pick his birthday gift. 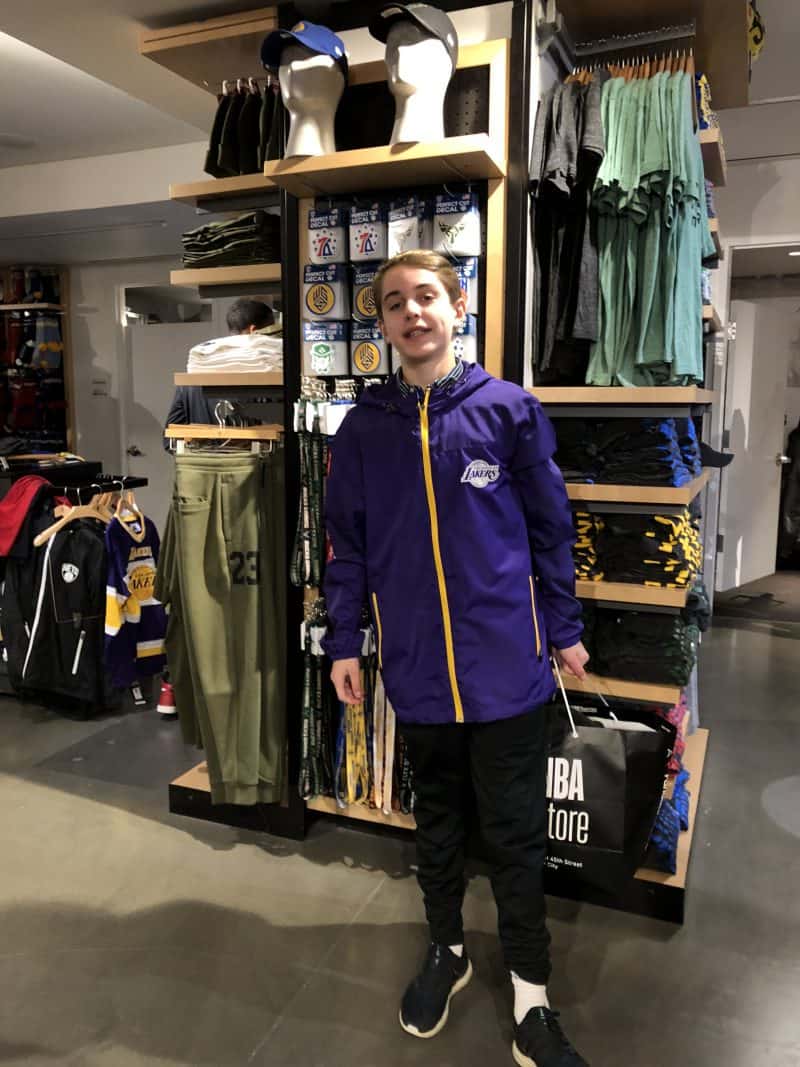 Now, you might recall that Whit and I vowed to be looking for The Ride.  John and Honey perused every rack in the store and Whit and I quickly grew tired of it.  We found a warm spot tucked away in the front window to rest and wait.  Well, I started people watching and noticed the man sweeping the sidewalk was the same man that broke out in a broom dance when we took The Ride.  We waited until it pulled up and then casually walked down the sidewalk.  After he finished we broke out into our own dance – all inhibitions thrown to the wind (you know Whit and I don’t have many to start with, right?!)  The people on The Ride were hysterical, taking pictures and videos and saying “look at those tourists”.  We almost collapsed in a fit of laughter by the time it was over.  Just at that moment, Honey and John walk up and asked what had just happened.  We told them and both were so relieved that they had missed the spectacle.  THAT is a moment Whit and I won’t soon forget.  (I know we are bizarre, strange humans.) 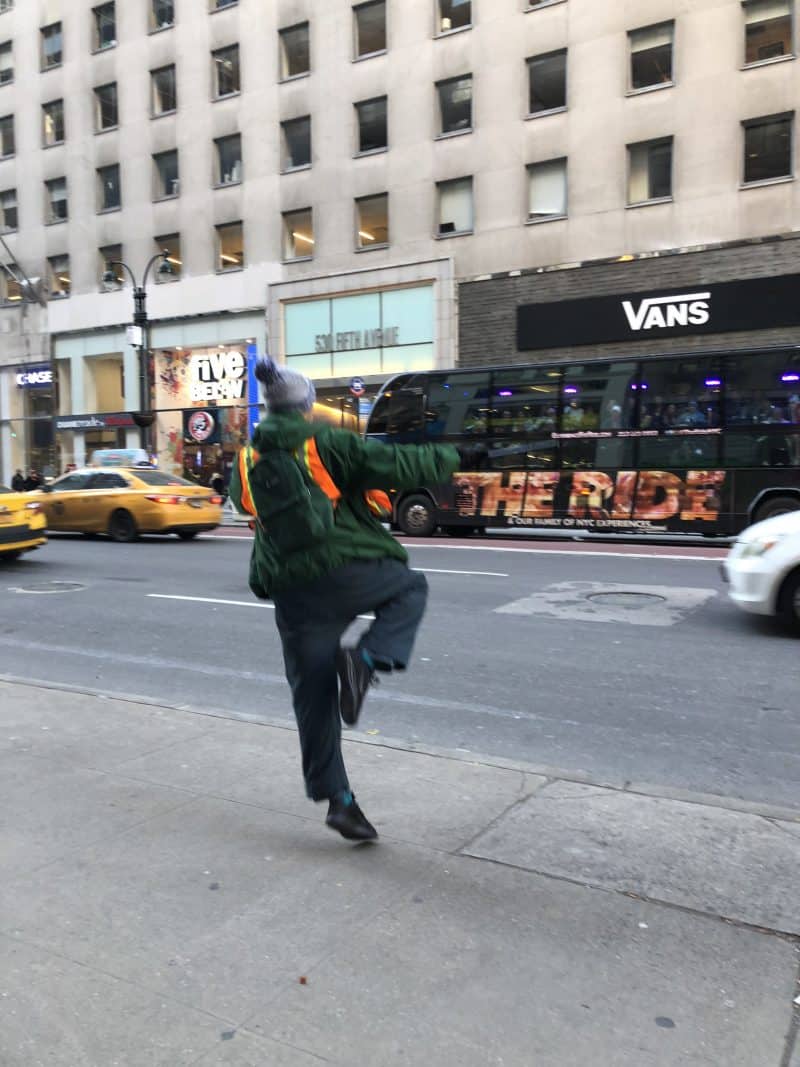 Our next stop was Dylan’s Candy Bar.  FINALLY!!  John has been talking about the 3 story candy store for a year. 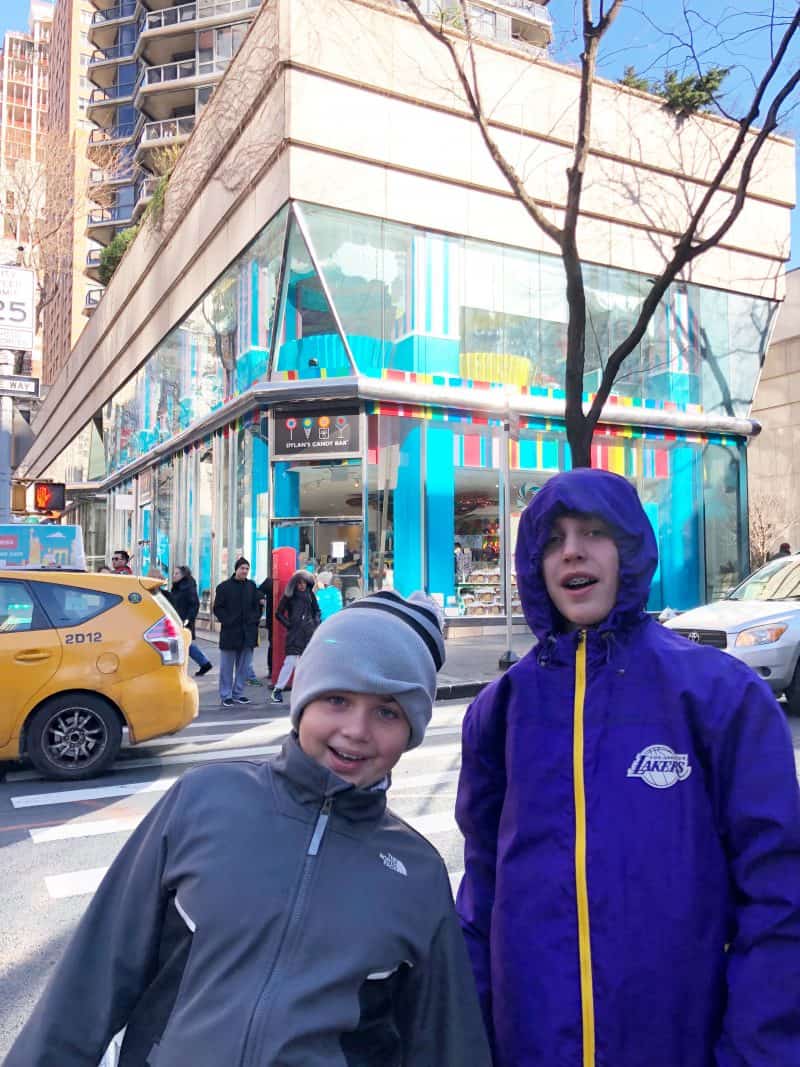 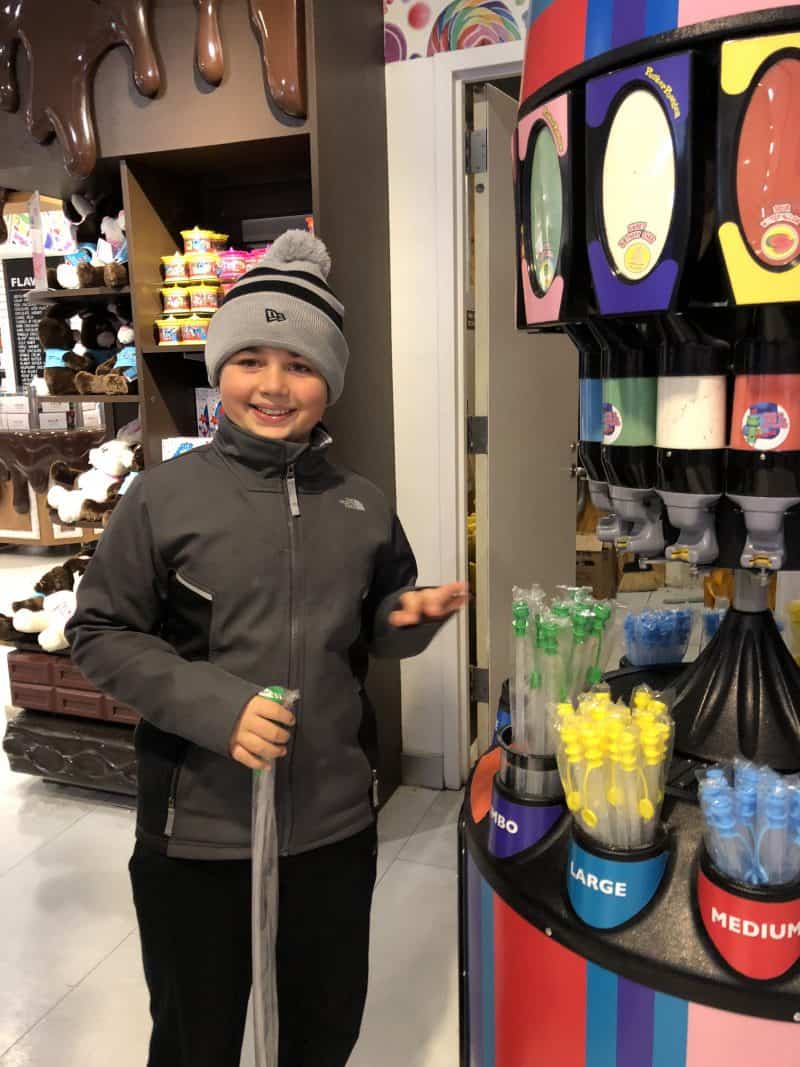 Look mom… even the floors are made of candy! 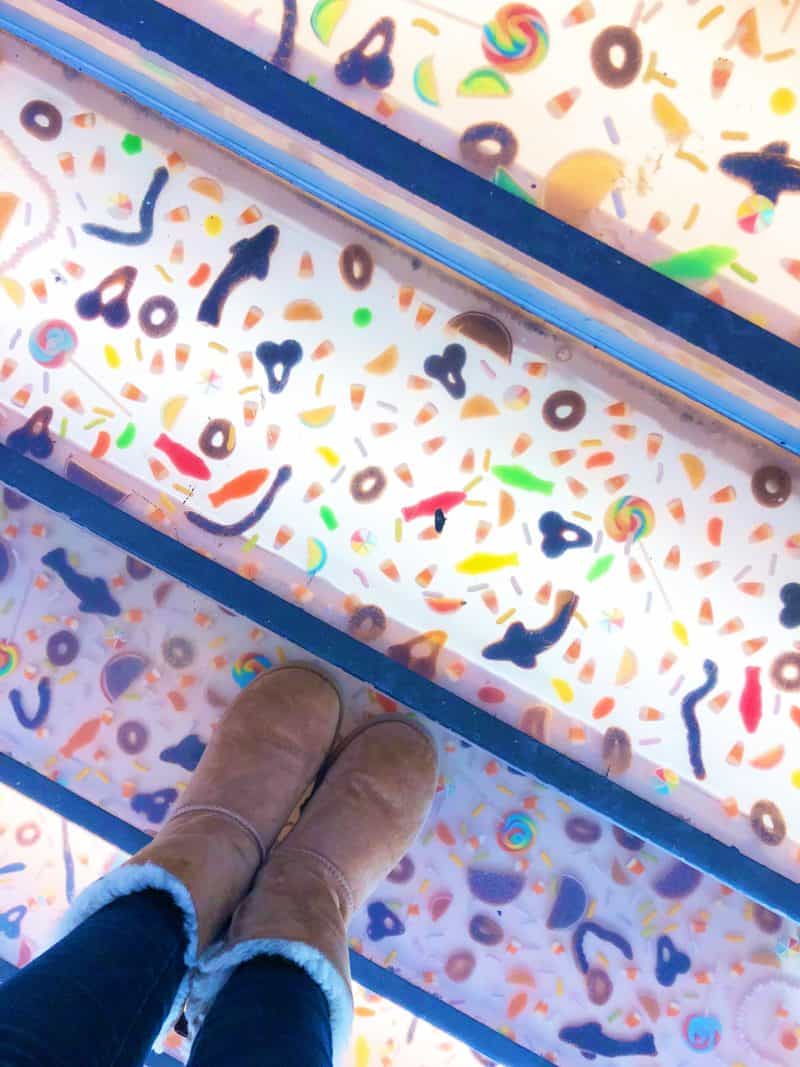 So, the funny thing here is that we kept trying to fit this in when we were nearby… but we were never really nearby.  Well, we had a big flight drama and ended up having to trade our direct flight home for one that connected through Charlotte.  We get off the plane in Charlotte and right there in the airport was a Dylan’s.  We all laughed at the irony.  It wasn’t 3 stories tall, so the taxi ride to the right one was worth it.  :-)

Our final stop on our NYC adventure was lunch at Sarabeth’s.  I LOVE this place!!  My favorite is the grown up grilled cheese and we all ended up getting it.  They loved it as much as their momma. 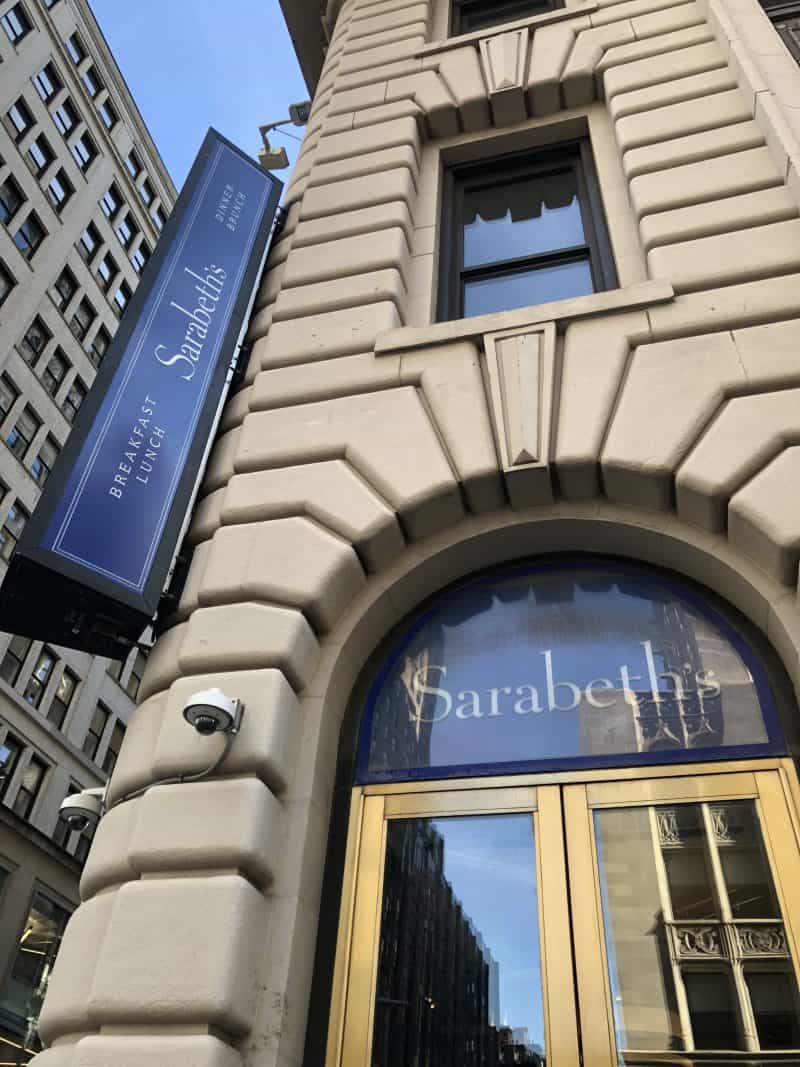 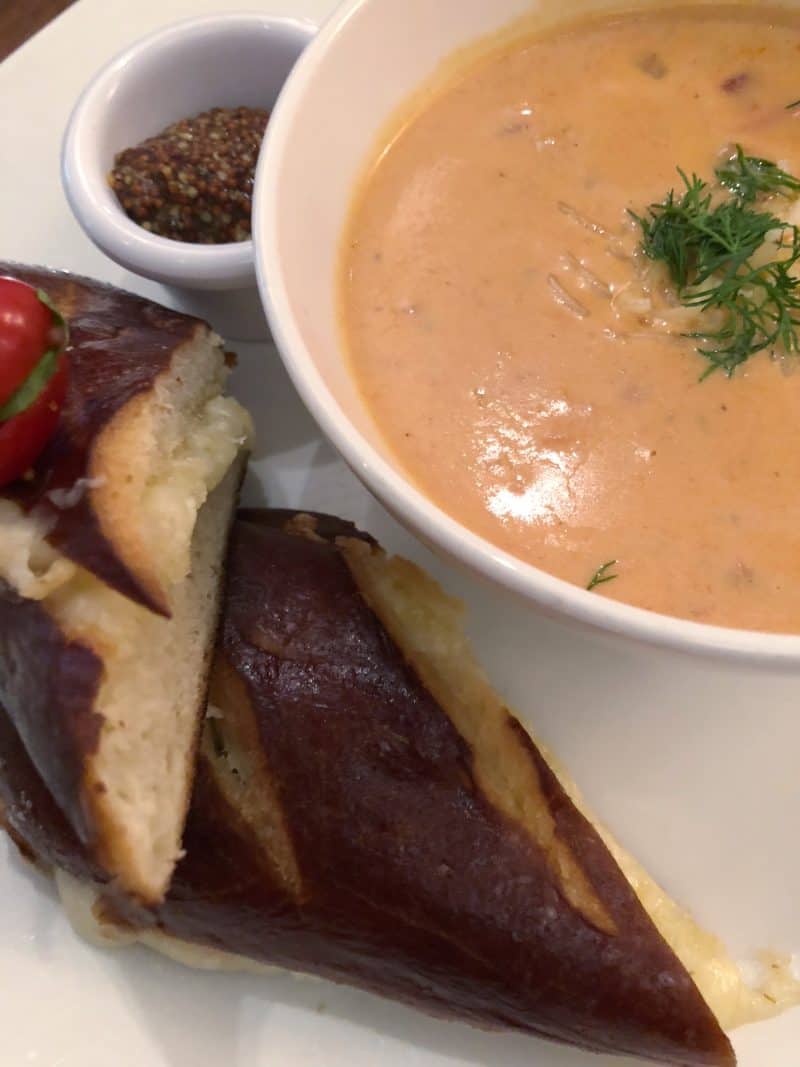 As we flew out over the city, Whit looked to me and said with huge eyes “it really is the city that never sleeps.”  Due to our flight issues, we had three seats together and Honey sat many, many rows away from us.  John orchestrated a warheads sour candy competition for the three of us and my mouth was literally raw by the time that was over.  Boys! 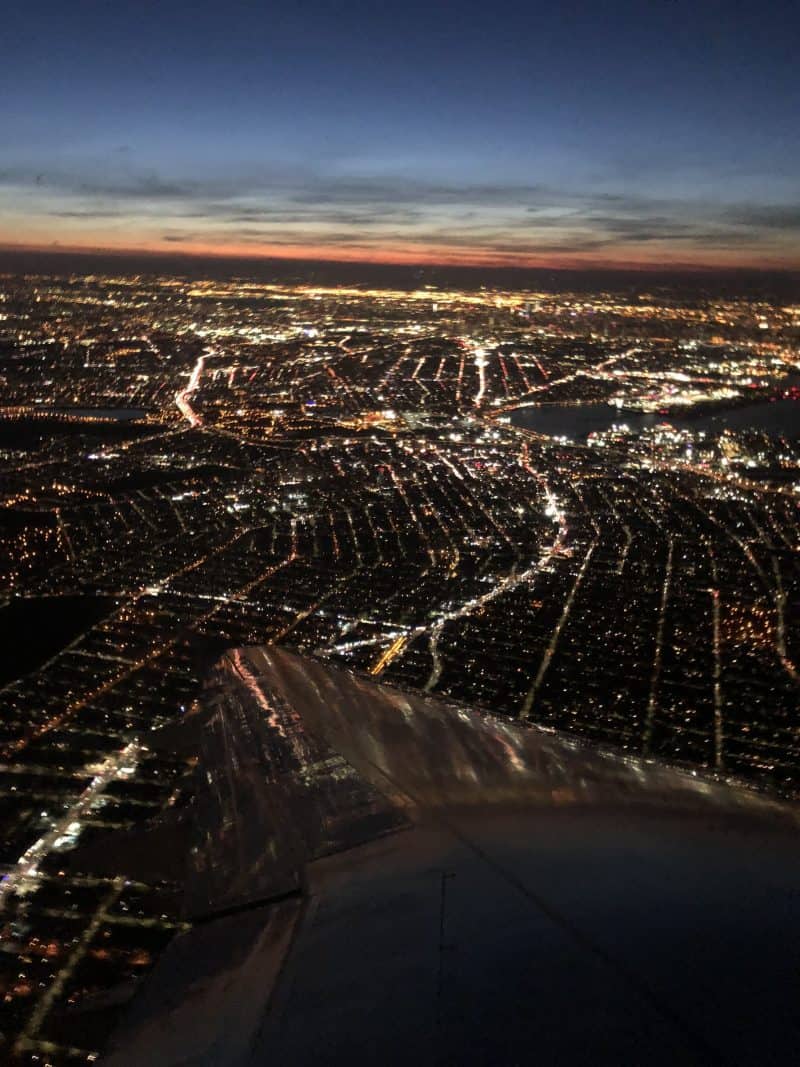 And so, we are back in Atlanta, reunited with Elsa and having dinner that Mother and Daddy-O thoughtfully had waiting on us.  All of our Christmas lights are on and it feels so good to be home after an adventure to remember.  We always talk about our favorites and least favorites after a trip as we travel home.  We unanimously chose Hamilton as number one.  Honey, Whit and I chose the parade as number 2, and John picked the Greenwich Village Food tour for his.  We couldn’t even pick a third between all of the incredible things we saw, did and ate.  Every time one of us said one, the rest of us said “oh yeah, I LOVED that!”  Our unanimous least favorite was dinner at Eataly.   I had a few questions on where we stayed – Intercontinental Barclay – and I will share all of those details real soon.  I share a lot on social media (usually not at the times we are actually doing them) and I try not so share too much info on where we are staying until we have left.  <3

Thank you so much for following along.  I think it’s safe to say we are ushering in 13 on a high note!