Day three was another busy one.  It started off soooo cold, windy and drizzly but by mid-day the skies were clear and blue.   Like the other days, we did a ton of walking and exploring.

We were up bright and early to head down to the Battery for our Statue of Liberty & Ellis Island guided tour (my travel agent link).  This was something that has been on John’s wish list since he learned about it and did an immigration reenactment in fifth grade. 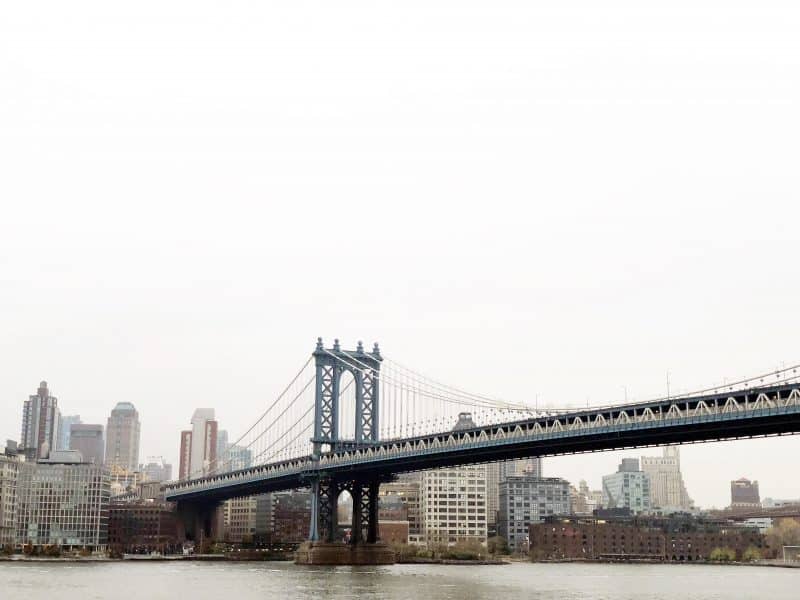 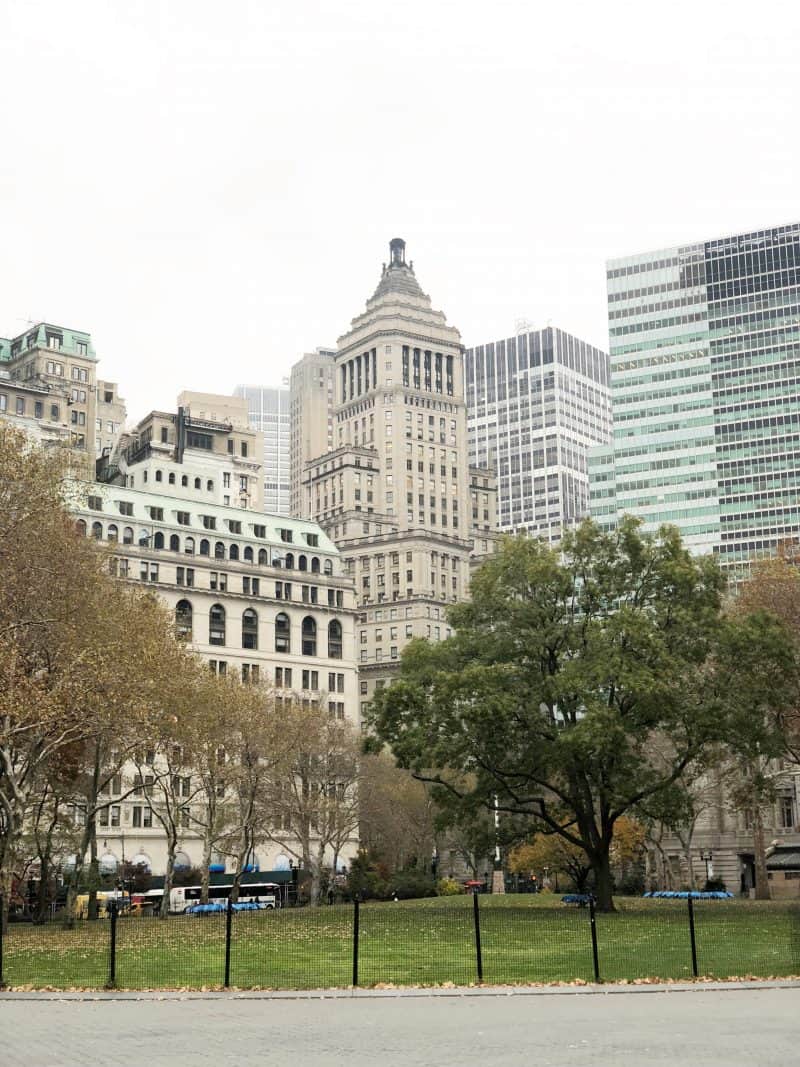 Our tour started at Castle Clinton with a brief overview of its role in NY history and immigration. 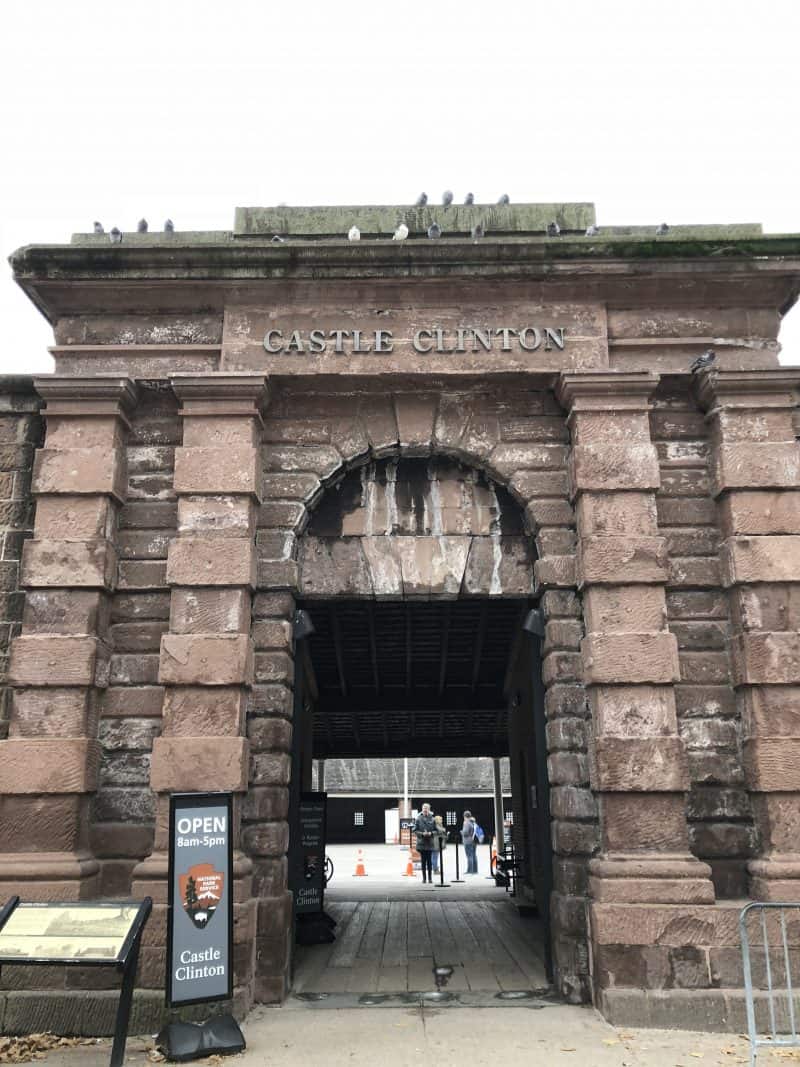 Next, we boarded the ferry to head over to Liberty Island.  It was frigid, but we braved the upper deck for spectacular views of Lady Liberty. 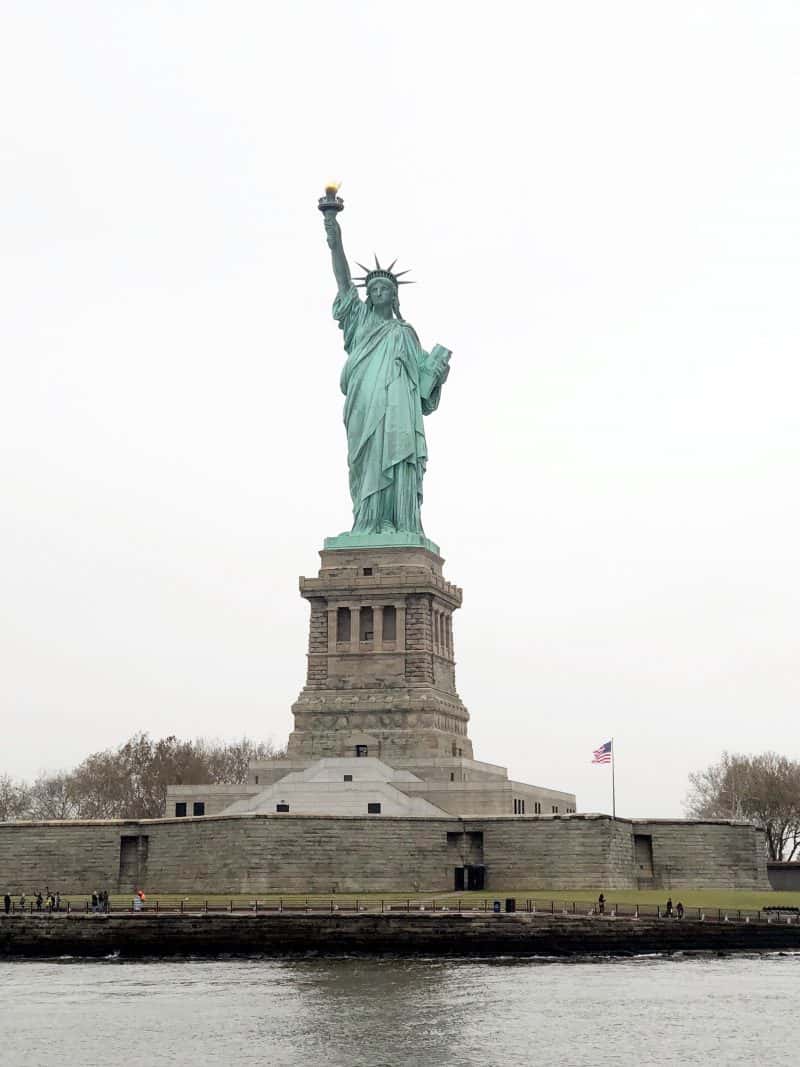 We had two guides for our group of 22.  One of the first things they did was take a family photo of each group to get that out of the way.  I like a tour that starts with the photo.  haha. 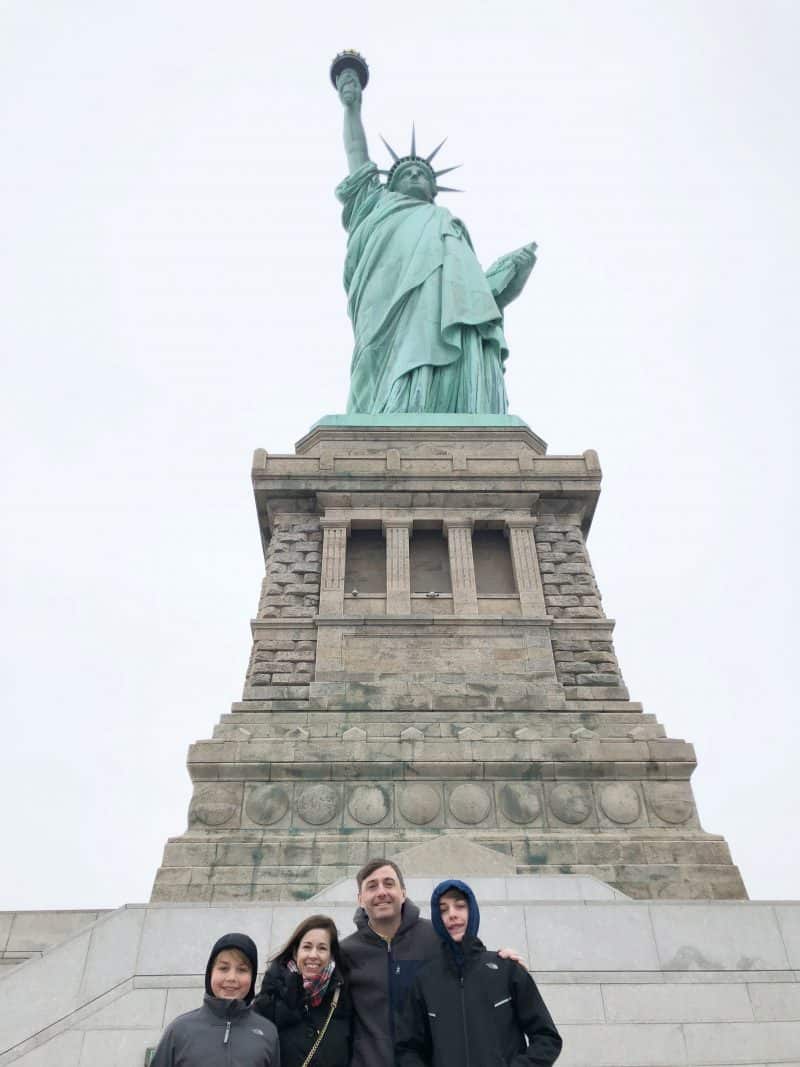 We loved learning about the history of the State of Liberty and the collaborative efforts of France and the USA to bring it to fruition.  Honey and I were particularly fascinated with the engineering feat!  Since we had pedestal access, we were able to see up into the inside support structure.  We learned Eiffel’s role in the construction earlier on the tour (he had a much better plan than the one to simply fill her with sand… can you imagine?!) and it was neat to see that the insides of the statue are reminiscent of his namesake monument. 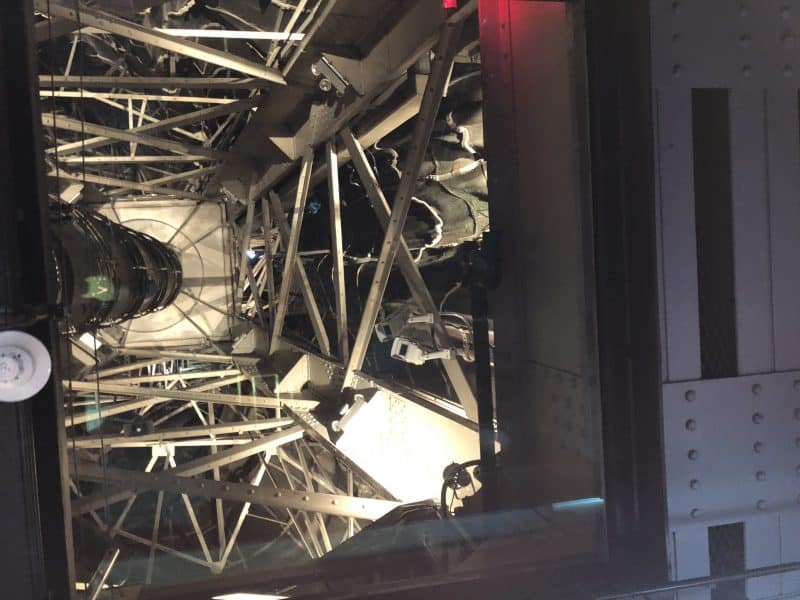 There were 360 views of the harbor from the pedestal.  I loved this close up of Ellis Island.  Can you even imagine arriving here as an immigrant to this beautiful building?  Look how the skies changed in just about 40 minutes! 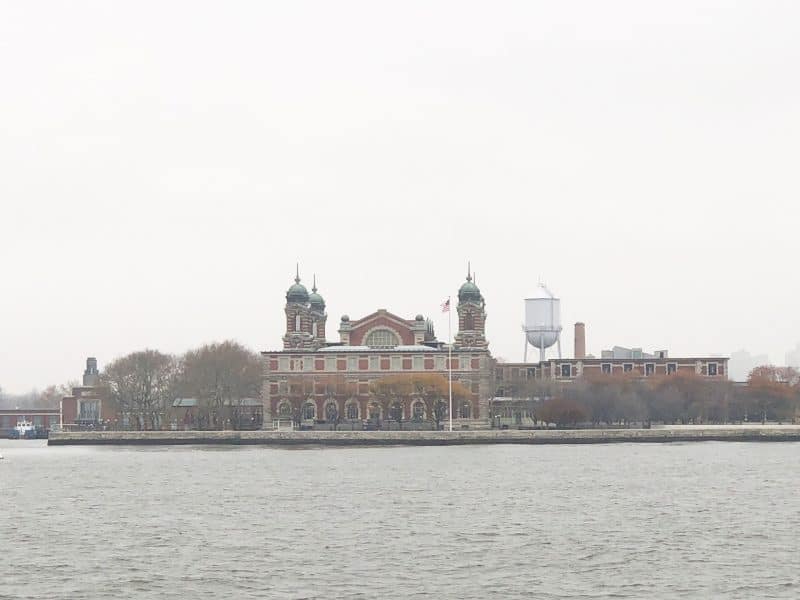 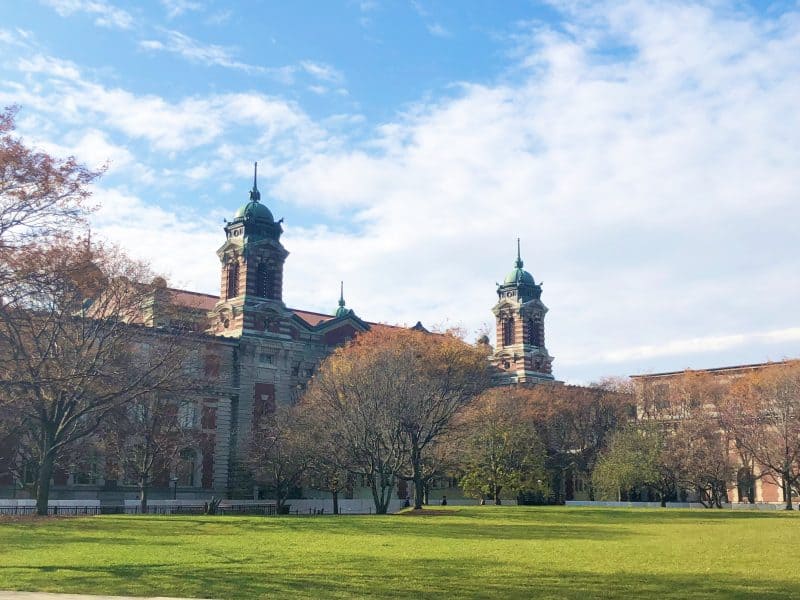 The Ellis Island foundation has only been able to raise funds to renovate and restore the main immigration building.  We learned that when the government closed Ellis Island they simply locked the doors and boarded up the windows.  The outer buildings (mostly medical, psyche, etc.) have still not been touched.  They are accessible by a different hard hat tour, however, which sounded neat. 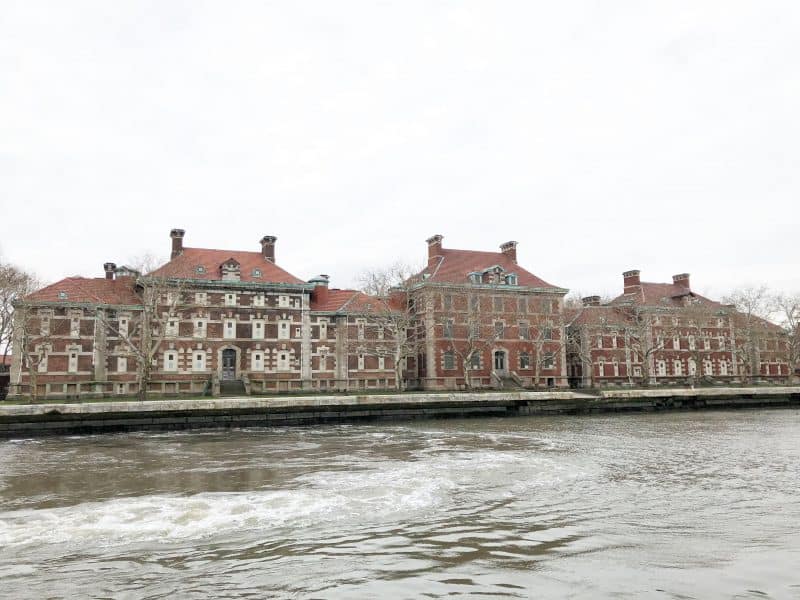 Inside was just as beautiful as the exterior.  Our guide walked us through the process of how so many of our ancestors arrived by ferry (just like us!) and were permitted entry into the US.  Unlike many museums and experiences documenting our American history, this tour was upbeat.  It was a story of hope and promise and the American dream.  It was crazy for the boys to imagine arriving in a foreign country alone – with just a few things – and starting a brand new life from scratch.  Thankfully, a few in our family tree had the courage to do just that.  :-) 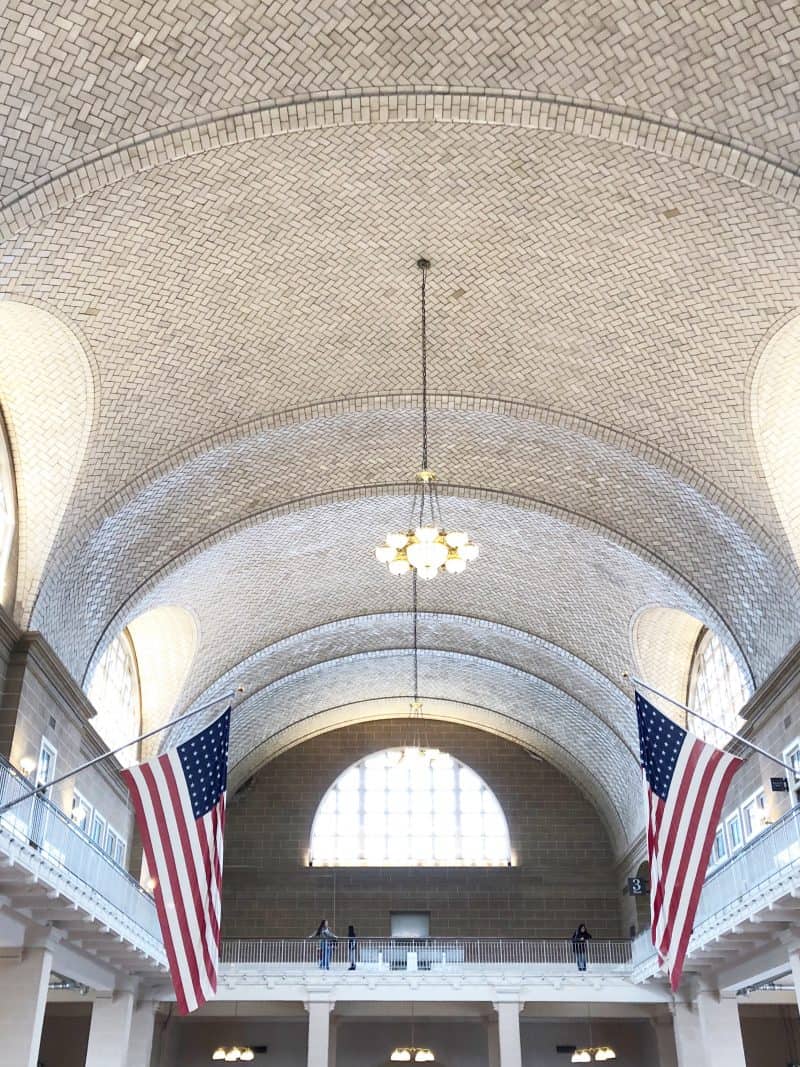 We loved seeing Manhattan from this vantage point.  It drove home how every culture, language, ethnicity and religion in the world coexists in this small city! 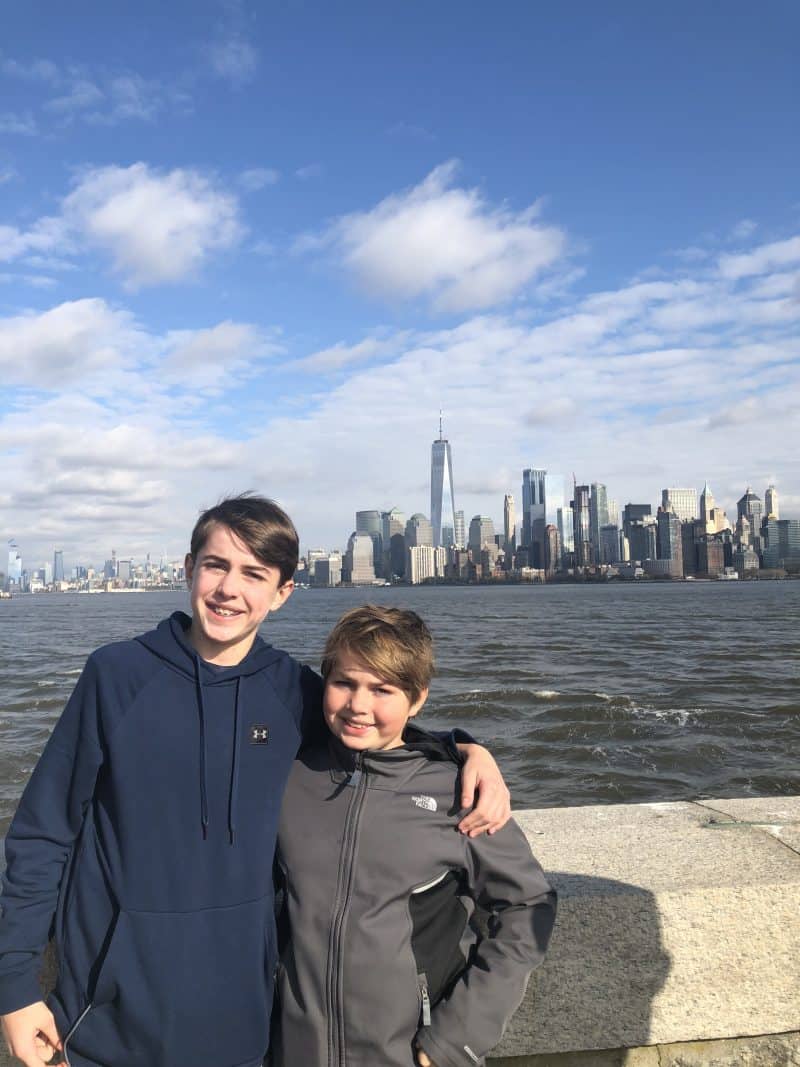 Ravenous by the end of our tour, we took the boys on their first subway ride of the trip (it was definitely an adventure…) and disembarked at Grand Central Station. 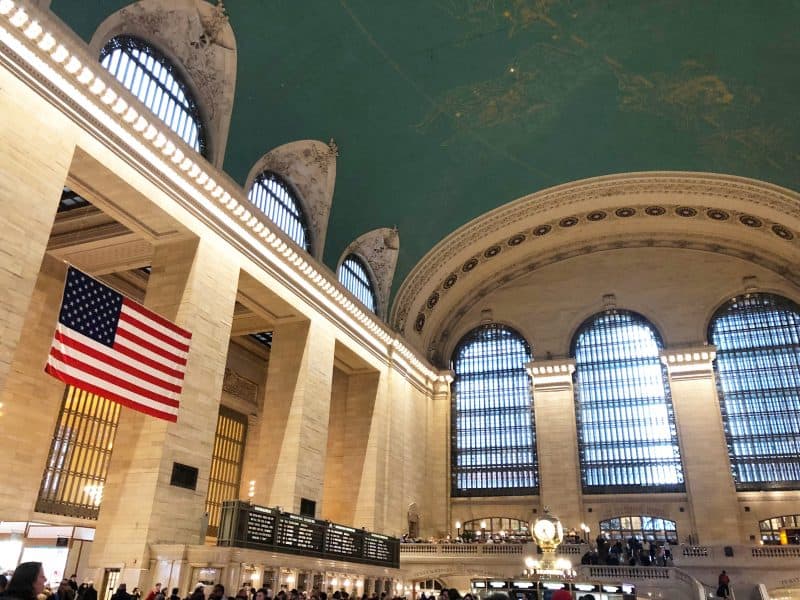 Everyone was so excited to have lunch at the iconic, century old Oyster Bar! 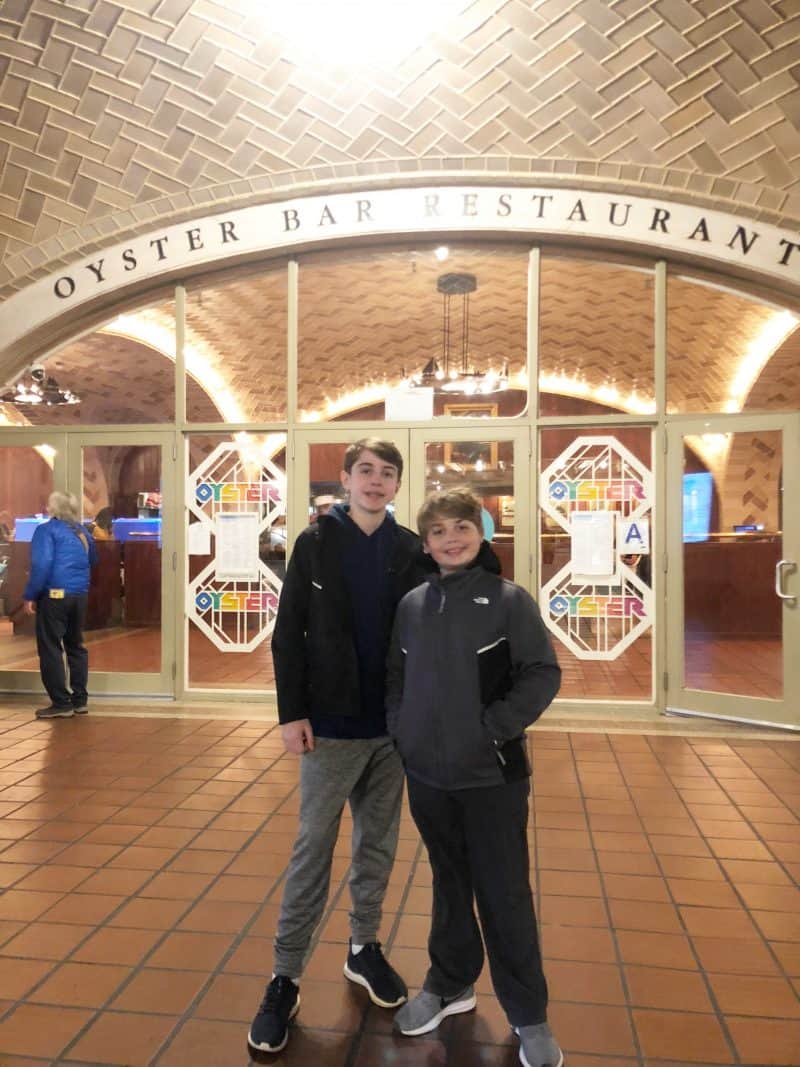 It was everything I had hoped inside – gorgeous architecture, good seafood and all the hustle and bustle of NYC. 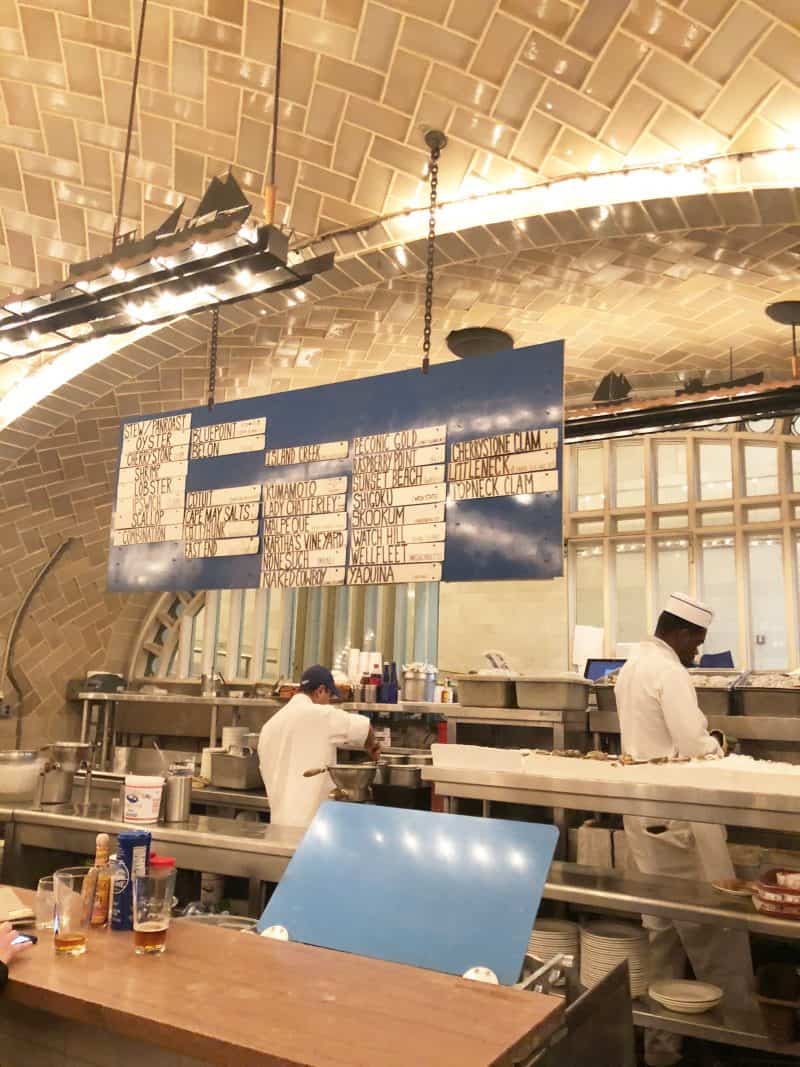 Now, don’t go here if you don’t love oysters, in my opinion.  We do, so it was a great fit and something we never do in Atlanta.  Honey and I each chose six, and the boys each tried one.  They were not huge fans.  Ha!  We all tried different things, but the stars were the raw bar and the pan roasts (essentially cream based, seafood laden soups). 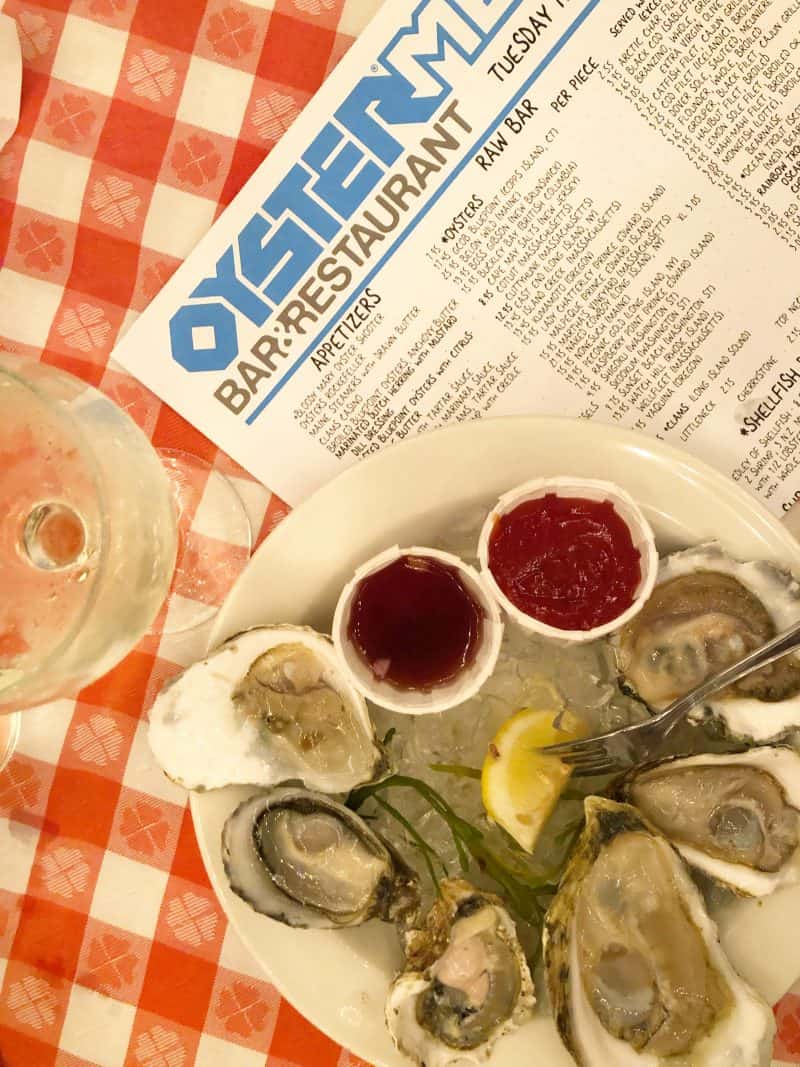 After a little nap in the room, we were off for a night on the town!  The boys minds were blown over Times Square (“it’s like daylight here!”). 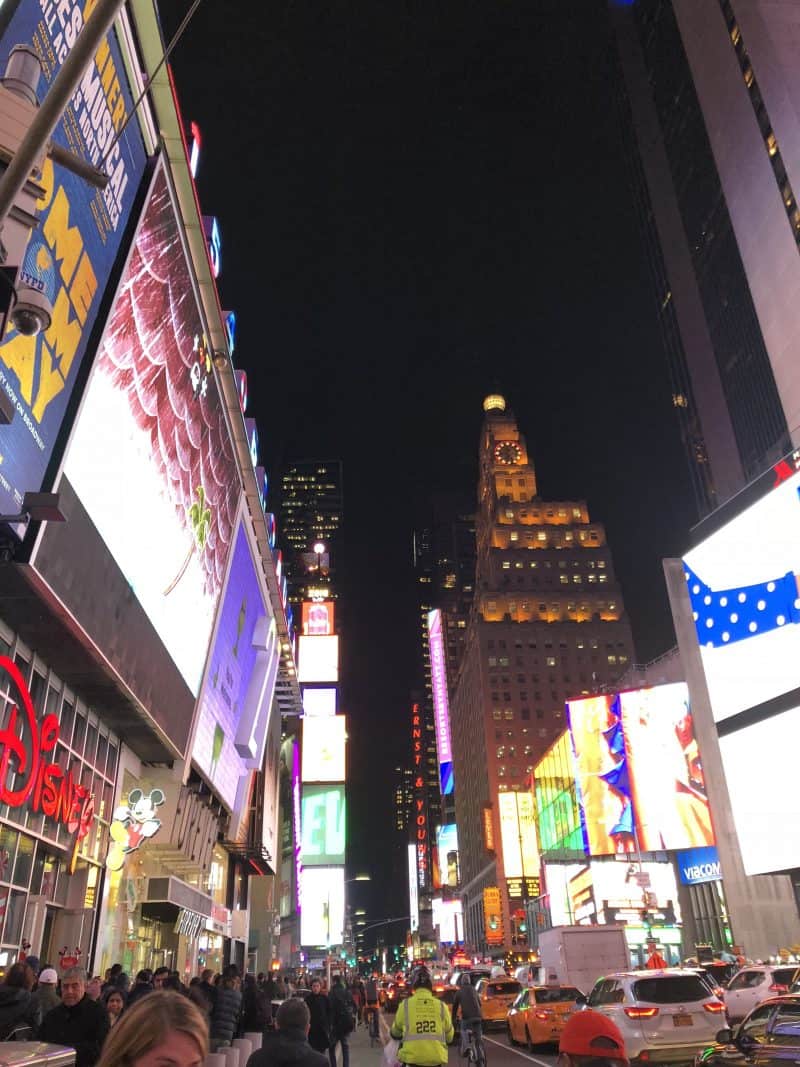 We have been excited about Hamilton for almost the entirety of 2018!  I bought the tickets the day they went on sale in the early Spring.  (For about half the price than I could have got them to see the show in Atlanta so I ended up feeling really good about that.  haha)  Much like Times Square, the boys were also a bit in awe of all of the shows and theaters.   It really is a sight to see. 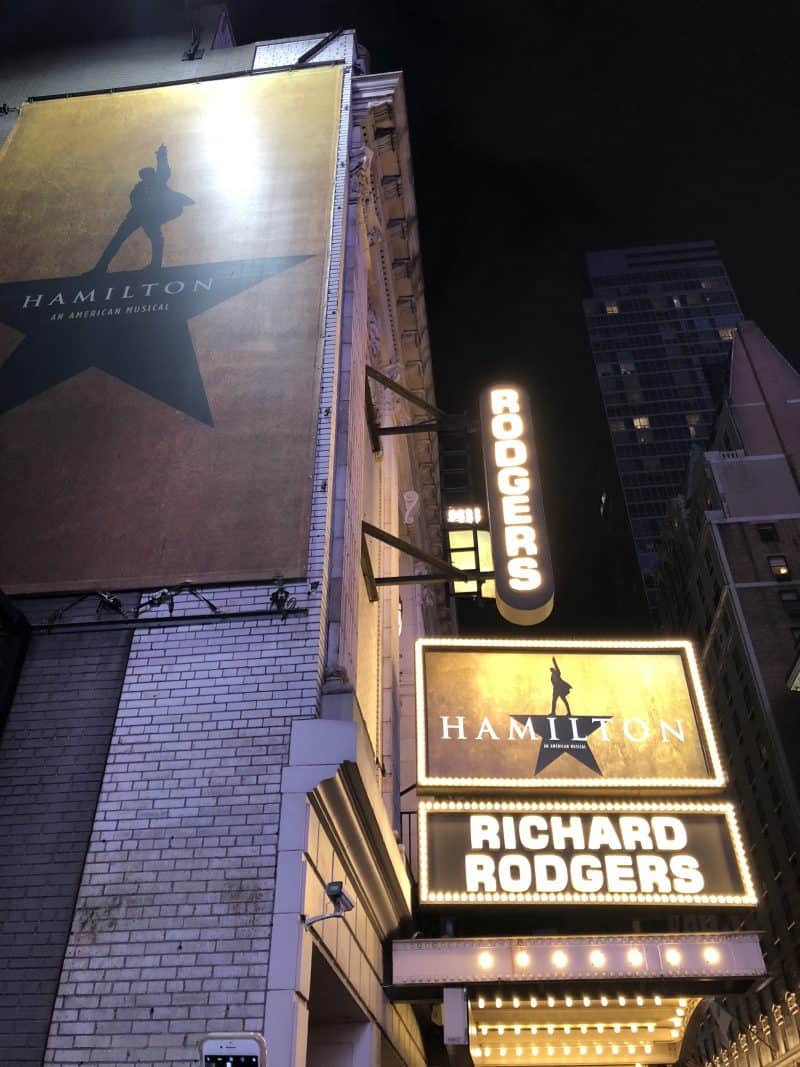 We had incredible seats, just a couple of rows behind where we sat on our girls trip last year! 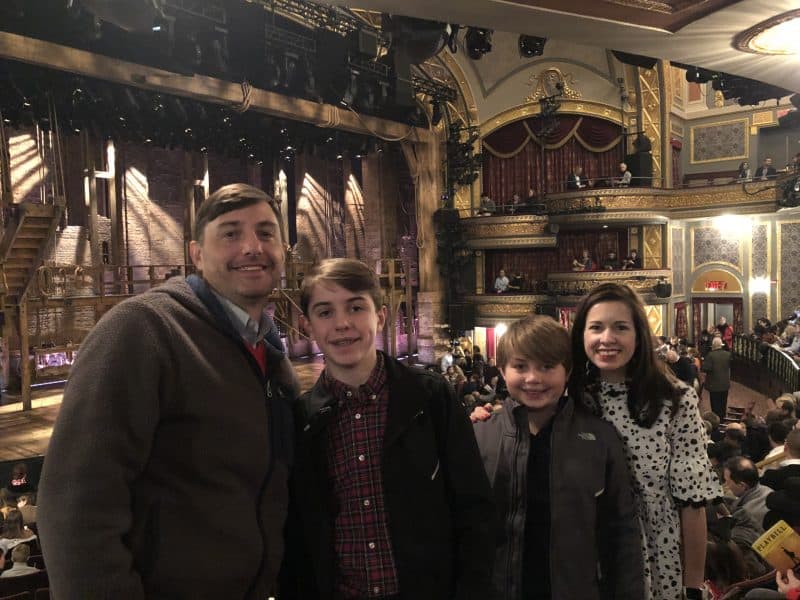 The show starts abruptly – almost with no warning.  Honey and Whit were talking when the first notes sounded and they quite literally did not move, perched on the edges of their seats for the entire first act.  Honey is really not a theater fan, and this was also his first Broadway show (in NYC).  He was the first of the four of us to start listening to, and then memorize, the Hamilton soundtrack but I was still a little worried he wouldn’t love the show.  But he did!  I knew Whit would love it and he certainly did.  And then there was John…  he said he really liked it and that he was really, really happy that he could now cross seeing a Broadway show off his life list.  I had to laugh – I could see a show every night and never grow tired of it.  He could see one in his lifetime and be happy.  I’m just glad he got to see such an AMAZING one for this once in a lifetime experience.  :-)

We were starving after the show and John had been dying for more NY pizza.  We sat down at John’s Pizzeria at 10:20 PM.  There’s something to the city that never sleeps saying, huh?! 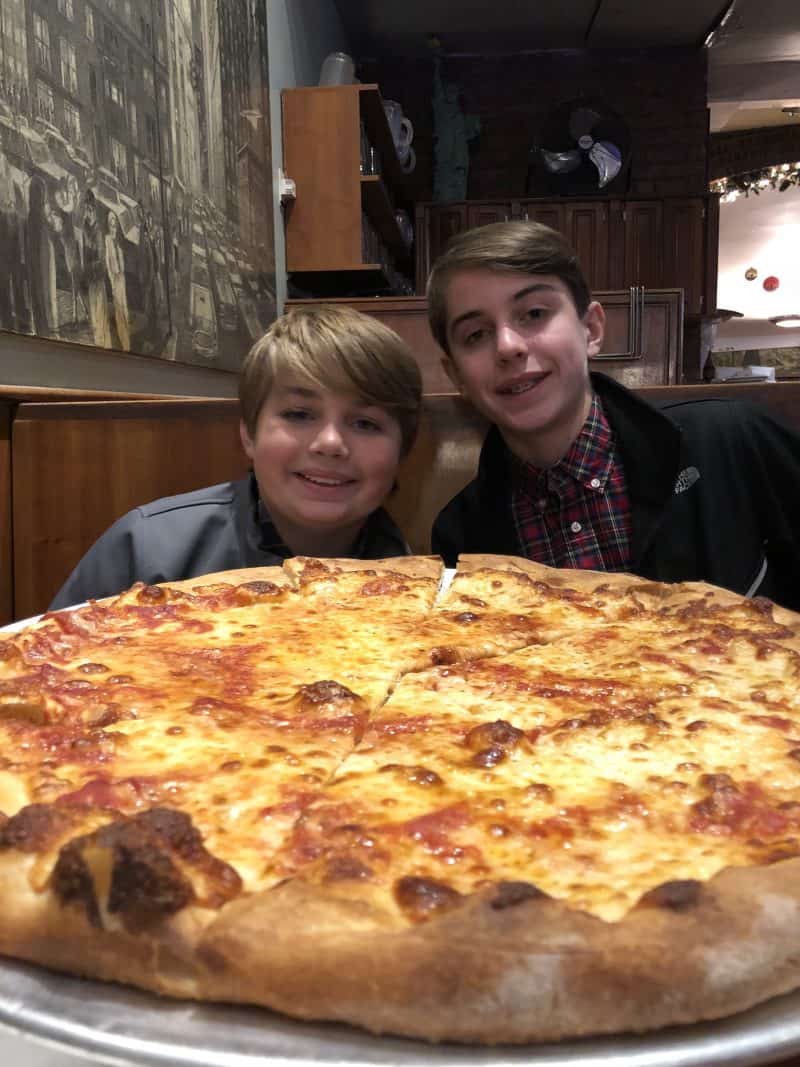 It is right next to the Frozen theater and Whit was sad to learn that we have neither tickets nor time to see it.  John looked really nervous for a second before he was flooded with relief at my answer.    By the way, the pizza was delicious.  Not as good as Joe’s in Greenwich Village but a solid choice.  (Now that I’m writing this I guess I should reiterate that we are from Georgia.  We were starving.  And it was 10:20 PM.  Cardboard might have tasted good.)