I’ve seen this floating all over Pinterest and thought it was an outstanding way to help intertwine the Easter story into the day’s festivities.  Simply number twelve plastic eggs and fill each with the corresponding piece of the story and item.  I followed this guide. 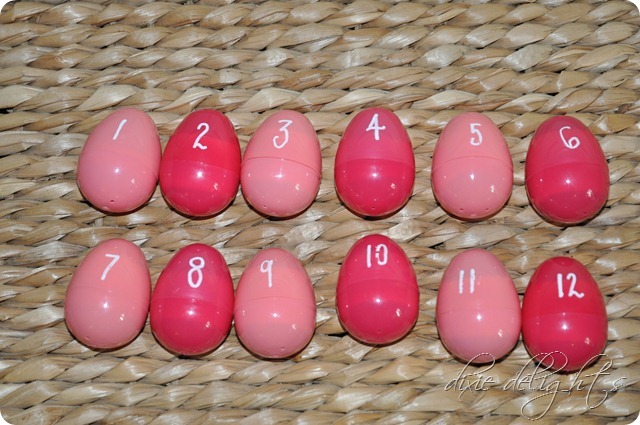 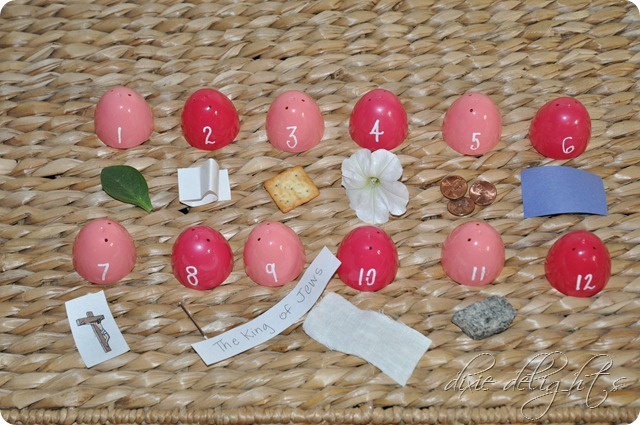 #1: When Jesus entered Jerusalem, the people waved branches because that’s what people used to do when a king walked by. Mark 11:8-9 (a leaf)
#2: Later, Jesus had a special dinner with his friends. A woman came and poured perfume on his head. This showed that she knew that he was the Christ and she knew that he would die soon. Mark 14:3 (a piece of cloth with perfume on it)
#3: The next day, Jesus had another special meal with his friends. We call this The Last Supper.  Jesus said that people who followed Him should have bread and wine or water to help them remember Him. Luke 22:19 (cracker)
#4: Jesus went to a garden to pray. (a flower)
#5: Judas was supposed to be one of Jesus’ special helpers, but instead he helped other men arrest Jesus. He did this because those men paid him money. Mark 14:10-11 (3 pennies)
#6: After Jesus was arrested, the soldiers were really mean to Him and made fun of Him. One thing that they did was to put a purple robe on Him. Only kings wore purple robes. They didn’t realize that He really was a King, they were just teasing Him because people thought He was a king! Mark 15:16-18(piece of purple cloth)
#7: Jesus was crucified. Mark 15:25 (crucifix or paper cross)
#8: When the soldiers put Jesus on the cross, they pounded nails into His hands and feet.  (nail)
#9: Another thing the soldiers did to make fun of Jesus was to put a sign on the cross that said “THE KING OF THE JEWS” Again, they thought they were making fun of Him, they didn’t realize that He really was the King of the Jews! Mark 15:26 (paper sign that says “THE KING OF THE JEWS”)
#10: After Jesus died, His friends put his body in a tomb. Later, some of the women who followed Him came to the tomb to put spices on His body and wrapped Him in white cloth. That was something they did back then when someone died. Mark 16:1 (whole cloves and/or white cloth)
#11: The tomb had a rock that could roll over the opening to seal it. While the women were walking to the tomb, they wondered how they would get the stone out of the way. Mark 16:3-4 (smooth, round rock)
#12: When they got to the tomb, they were amazed to find that the stone had been rolled out of the way – and Jesus’ body was gone! Then an angel came and told them, “He is risen; he is not here” This egg is empty because Jesus’ tomb was empty. Jesus’ tomb was empty because He was resurrected!Mark 16:6

After our hunt, we took turns opening and reading the story to the littles in what was the sweetest part of my afternoon!
xoxo