Right up until the eleventh hour, the PCP had requested rice krispie treats for his birthday snack at school.  And then, at the very last minute, he decided that he “actually” doesn’t like rice krispie treats (huh?  I’m questioning his parentage right about now seeing as Honey and I can tear through a pan in about twenty minutes flat.)  Instead, he wanted to take popcorn in for his class.  (This is the same child that took yogurt in one year.)  As soon as he said it, I remembered a birthday cake popcorn I read about a while back and I couldn’t wait to re-create it!  I’m also thinking this could be a great alternative for kids with allergies! 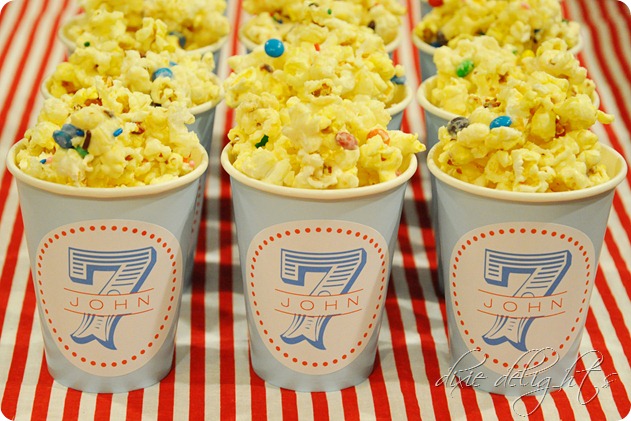 Birthday Cake Popcorn (24 servings)
5 – 3oz. bags of microwave popcorn, popped.  I went all out here and bought the kind with so much faux butter that it pops yellow.
white chocolate candy melts – I used an entire 12oz. bag plus about half of another bag that I already had open
a little canola oil (or whatever you have…except probably olive as that just sounds wrong)
yellow cake mix
mini m&m’s
sprinkles

1. Melt your chocolate in the microwave according to the package directions.
2. Stir in a tablespoon or two of oil to thin it out some.  Then stir in 8 tablespoons-ish of the cake mix.  Try to get most of the lumps out.
3. In a large bowl, dump in your popcorn, a bunch of m&m’s and the chocolate mixture.  Stir well.  I had to do mine in two batches.
4. Spread the popcorn out in one layer over waxed paper.  Add sprinkles.  Let cool and then crumble into pieces. 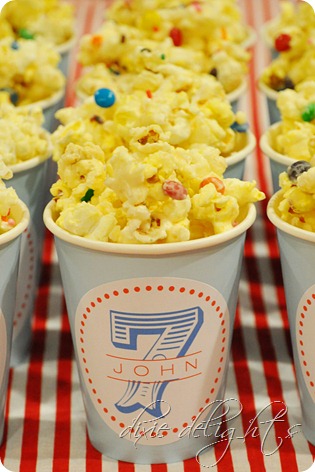 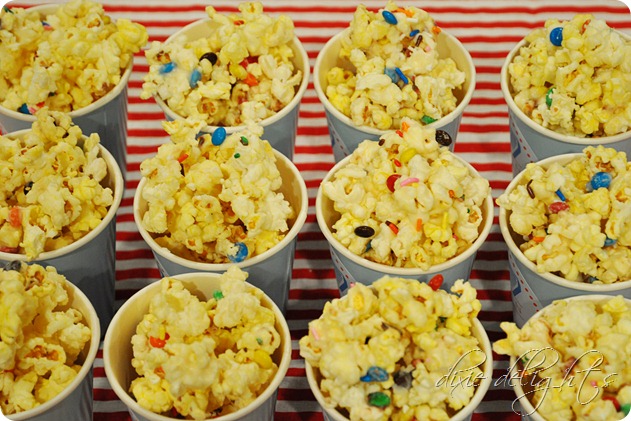 I had just enough blue paper cups left over from some party or another so I printed out large circle labels to decorate them and then loaded them up with the popcorn.

Easy peasy, pretty darn tasty and SO very cute!!  Oh, and rave reviews from the seven year old set… not that they’re really all that hard to impress.
xoxo