We’re back in Atlanta and the first stop we made was to pick up the new slip covers for my dining room chairs.  Yee haw!!!!!!  I’m pretty much in love… 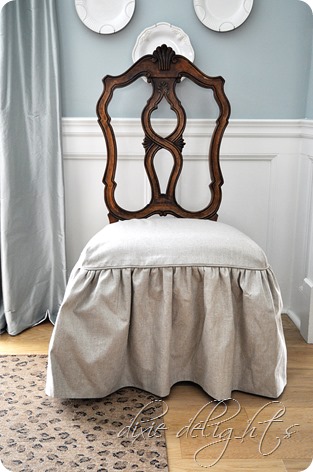 We bought the dining set as a, well, SET for our first anniversary.  It’s the only “set” of anything that we own and, while I do adore it, our dining room in this house is much smaller and more walled off and made things seem very leggy.  And dark.  And expected.  So, after raking my brain on how to make me LOVE the room (I’ve considered everything from a to-the-floor table cloth to new chairs), this picture on Cote de Texas was a true a-ha moment for me.  I could cover the legs, brighten things up, aaaaaand keep the pretty carved backs showing with to the floor gathered slip covers.  Oh, and I can also wash them when the littles inevitably spill their supper on the nice linen skirts. 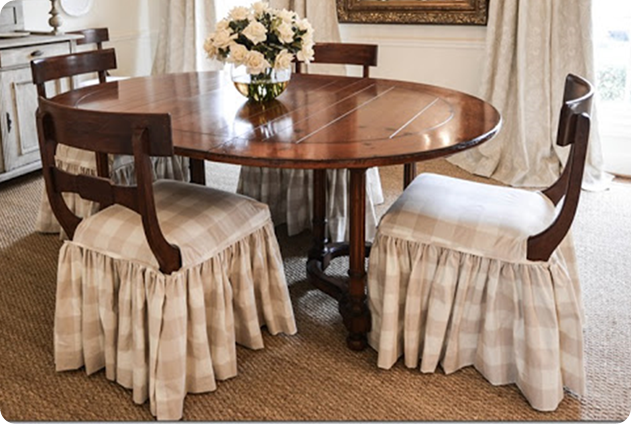 After a failed attempt to make my own, I brought in a professional.  I had hoped to use the blue fabric currently on the chair seats, but alas it has been discontinued.  Since I had linen fabric left over from recovering the living room chairs and those are just on the other side of the doorway, I used it instead.  What luck that I had just enough on hand!

It’s extremely overcast and I didn’t feel like getting out the tripod so excuse the dark pictures.  Oh, and the slips could stand to have an iron run over them.  But all that can wait … here’s the before: 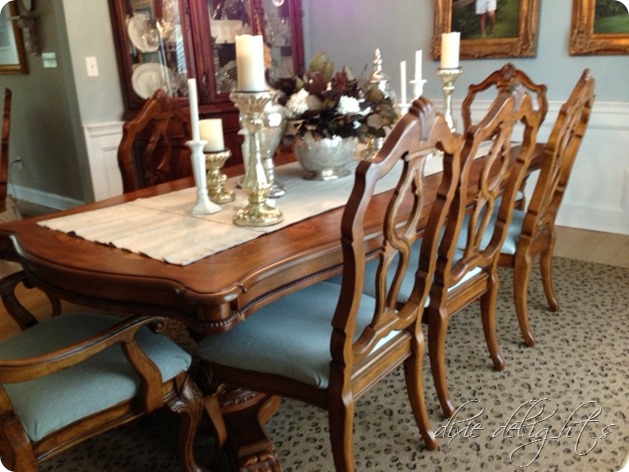 And here’s the after… 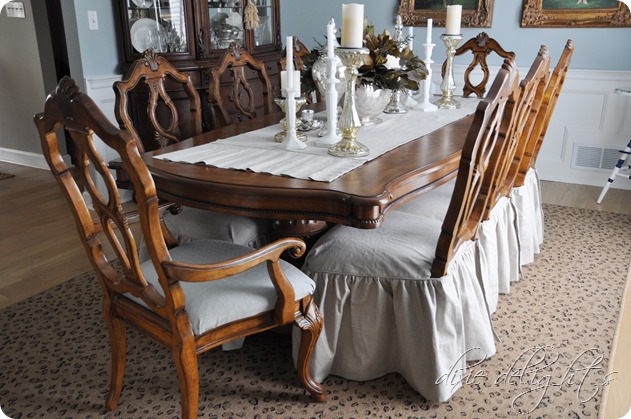 So, my question for y’all is….  should I also skirt the two arm chairs?  In a short ruffled skirt?  Or to the floor to match the side chairs?  I was thinking I could get away without doing it but now that I have the first six done I kind of think the two end chairs need something.

I also think I need to simplify what’s currently atop the table, based on the inspiration photo.  I keep toying with removing the leaf from the table but then it would seat only six and be the same size as the kitchen table.  And I’d have to add it back in every time we had company.  So that’s probably not the most practical idea.  Honey says I subscribe to the “form over function” train of thought, which is probably pretty spot on in most cases :-).

I’ll be back to show updated pics of the new exterior paint job once the rain washes the pollen off.  I liked to have a stroke when I drove up and saw the light green shutters laying in the yard.  I had no idea the pollen had been coming down in sheets while we were away.  How very miserable!

Flattered for the feature at Le Chateau des Fleurs!

By dixiedelights | Filed under Uncategorized | Tags: before and after, decor

59 thoughts on “Skirting the Issue”