What I really should have labeled this is “dessert for breakfast.”  Ina’s cinnamon baked doughnuts and Mexican hot chocolate were a decadent way to start an icy morning last week. 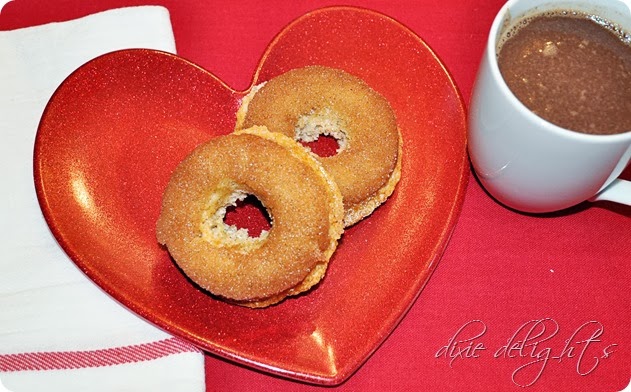 Baking spray with flour
2 cups all-purpose flour
1½ cups sugar
2 teaspoons baking powder
1 teaspoon ground cinnamon
½ teaspoon ground nutmeg
½ teaspoon kosher salt
1 extra-large egg, lightly beaten
1¼ cups whole milk (I used skim because it was what I had.  And that totally made it healthy, right?)
2 tablespoons unsalted butter, melted
2 teaspoons pure vanilla extract
for the topping
8 tablespoons unsalted butter
½ cup sugar
½ teaspoon ground cinnamon
Preheat the oven to 350 degrees. Spray 2 doughnut pans well. Into a large bowl, sift together the flour, sugar, baking powder, cinnamon, nutmeg, and salt. In a small bowl, whisk together the egg, milk, melted butter, and vanilla. Stir the wet mixture into the dry ingredients until just combined. Spoon the batter into the baking pans, filling each one a little more than three-quarters full. Bake for 17 minutes, until a toothpick comes out clean. Allow to cool for 5 minutes, then tap the doughnuts out onto a sheet pan. For the topping, melt the 8 tablespoons of butter in an 8-inch sauté pan. Combine the sugar and cinnamon in a small bowl. Dip each doughnut first in the butter and then in the cinnamon sugar, either on one side or both sides.  Makes 12.

2 cups whole milk (I used skim.)
1 tablespoon light brown sugar
4 ½ ounces bittersweet chocolate
½ teaspoon pure vanilla extract
1/8 teaspoon ground cinnamon
Smallest pinch cayenne pepper
Long cinnamon sticks for stirrers, optional
Place the milk and sugar in a medium saucepan and bring to a simmer. Off the heat, stir in the chocolate, vanilla, cinnamon, and cayenne pepper with a wooden spoon and allow to steep for 3 minutes. Reheat the hot chocolate over low heat until it simmers.
Strain the chocolate into a measuring cup and pour into mugs. Stir with cinnamon sticks, if desired.  Makes 2-3 cups.

The hot chocolate was good, but the doughnuts… oh my stars.  They were so easy to make and, needless to say, my crew loved them.  Ina suggests serving this as a dessert on a wintry  night and I think that would be just perfect!