Y’all… after nearly a year of planning and being so excited I could bust, last week I surprised the one that cannot be surprised – HONEY!!!!  I do these things with the littles all the time, but have never had the thought nor opportunity to do the same for their daddy.  And besides, the man cannot be tricked.  So, when he arrived home from work last Tuesday, a home spun crossword puzzle was waiting on the table.  He LOVES a good puzzle, but was pretty puzzled by this one.  He thought it was something for the good old blog so he sat right down and sorted it out. 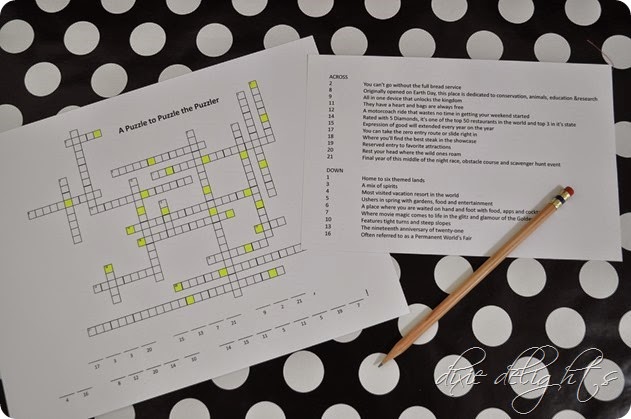 Every clue was related to Disney… a resort, park, restaurant, etc.  At the end he had to use the letters in yellow to fill in the puzzle stating “Pack your bag, we leave Thursday!”  At this point he said I think it’s cute and will be fine for Dixie Delights.  I just stared at him and he says “wait, are we going somewhere?”  I nod and he asks where.  “Where do you think?”  “Disney?  When?  This Thursday?  We can’t go Thursday.  I’ve got a huge meeting.  And a baseball tournament to coach.  And John can’t miss his first track meet.  And I have to coach soccer for Shawn Saturday.”  I’m about to bust with excitement and tell him not to worry that it’s all been sorted out and he CAN in fact leave Thursday and that the littles AREN’T coming.  You see, I had been in cahoots with his manager since January!!!!!!!!!!!!!  The head baseball coach too.  And track was sorted out as well.  And Mother and Daddy-O would be arriving momentarily to watch the littles.  (The only thing I didn’t see coming was the soccer coaching job, but that was quickly sorted out.)  And he could NOT believe it!!!!!!!  I tell him that there’s SO MUCH MORE and lead him outside to the porch. 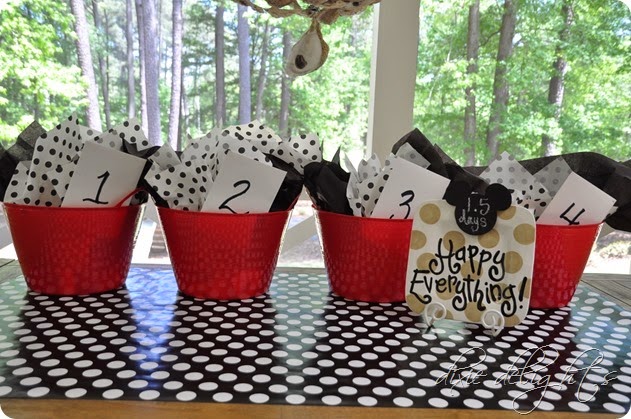 Our trip was four full days and totally planned out!!  Each of the four buckets included the day’s itinerary and birthday gifts corresponding to that day’s activities.  Oh, and of course I had to get out the littles’ Disney countdown chalkboard for my Happy Everything plate.  Because sometimes it’s fun to celebrate like a kid!! 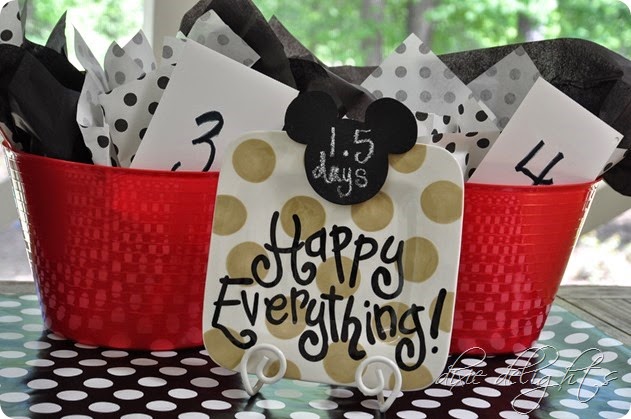 Day 1: We would put the littles on the bus and head to the airport!  I splurged on flights because I know how he hates the drive to Orlando, and I finally made him a bag tag!  The Magical Express would deliver us to our Club Level room at Disney’s Animal Kingdom Lodge.  The details of the trip wrote themselves… when we were staying at Animal Kingdom last September, Honey and the boys were obsessed with curiosity about what amazing things must lie on the sixth floor club level.  I knew then and there that I had to make it possible.  That night we would dine at the esteemed Victoria and Albert’s – one of the top 50 restaurants in the world – and then we would hop over to the Magic Kingdom for a few favorite fast pass rides and fireworks.  The shirt is Vineyard Vines and the Lilly bow tie is Palmetto & Pine. 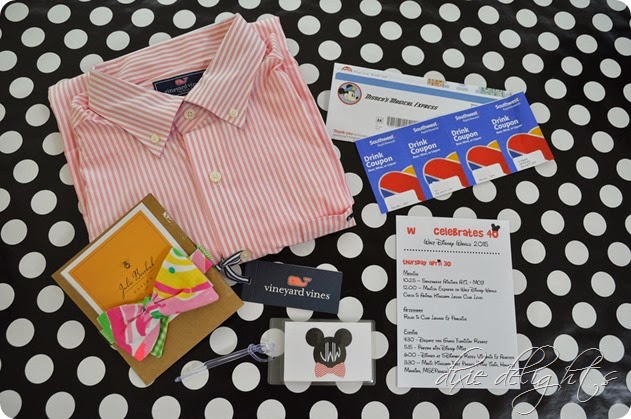 Day 2: Honey loves to sleep in, so I never planned anything before lunch.  He has mentioned at least a thousand times how much he would love to stroll around the world without littles – eating and drinking himself into oblivion along the way.  Well, that’s just what I planned and with Flower & Garden Festival going on it was perfect timing!  And after all of that eating and drinking, we were to eat again at Le Cellier in Canada.  I picked the polo up on clearance at the Disney Store last year and the custom birthday button is from Park Bound.  Since we’re amassing quite the collection of Magic Bands this year, I’ve started customizing them with what the trip was for.  These read HONEYis40 and 40yEARS. 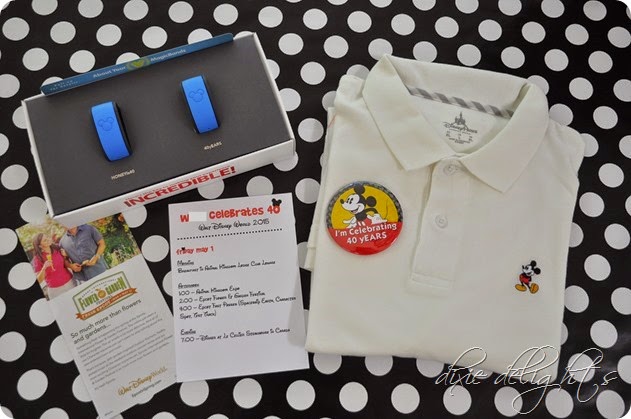 Day 3: After sleeping in again, day 3 brings a relaxing lunch on the patio at Hollywood & Vine and a few favorite fast pass rides in Hollywood Studios.  After dinner at one of his very favorite restaurants (Sanaa), he was in for a real treat and something he has expressed interest in multiple times – a RunDisney race.  Team 40yEARS was registered and geared up for the last go of the Expedition Everest Challenge!!!!  I picked up the Yeti running shirt at Raw Threads and have been saving the Yeti poster from Old Try as a momento from this trip! 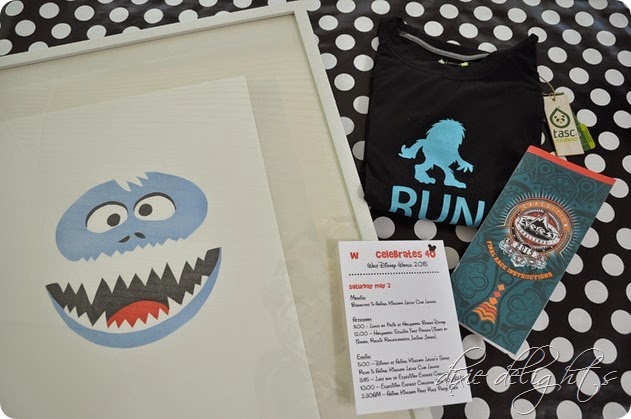 Day 4: Our last day was to be spent back in the Magic Kingdom with lunch at Be Our Guest (he loves the roast beef) and a few favorite rides. The afternoon allowed for loads of relaxing at the Animal Kingdom Lodge pool and in the Kilimanjaro Club lounge while catching up on one of his favorite authors (per his 40×42 list).  Our flights would deliver us back to Atlanta just before midnight. 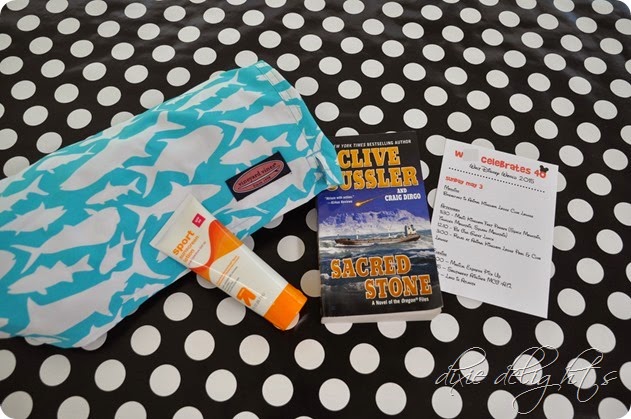 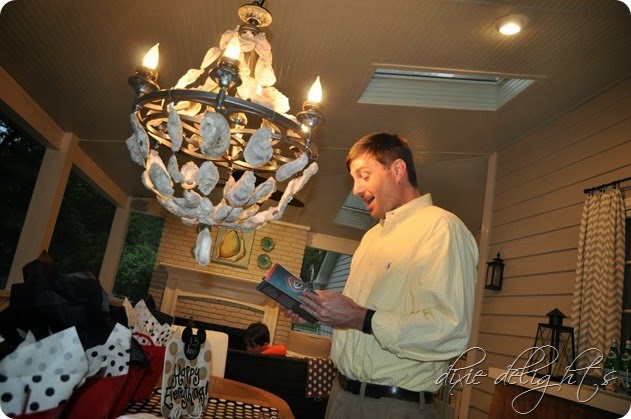 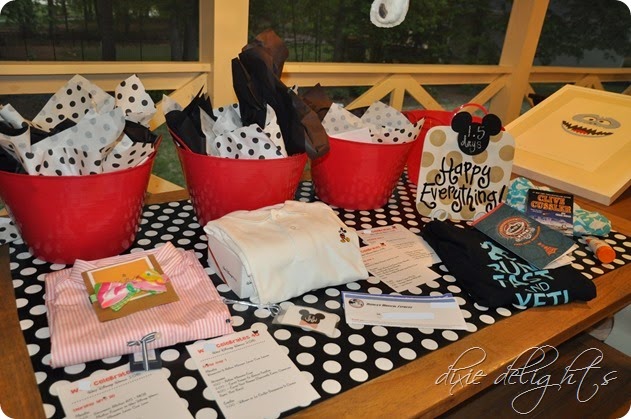 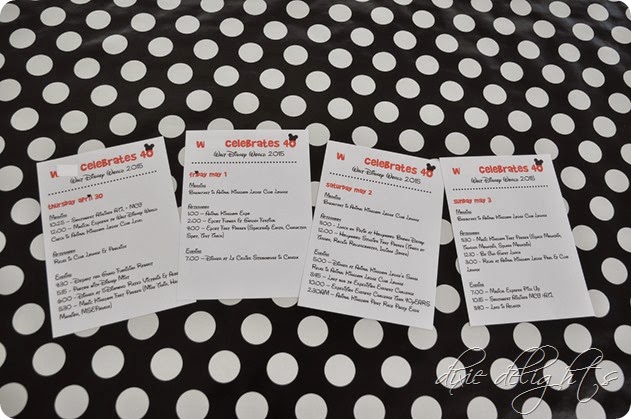 Disney has become a very special place for our family, and Honey says pretty much every time we are there that he’d love to come without the boys.  Gasp :-).  When I started thinking about an amazing and memorable way to celebrate his birthday, it just made sense!  I have saved money ALL YEAR from gifts and from my blog earnings to completely fund the trip, and was able to keep it all a secret by charging everything to the card I use for Dixie Delights.

I also want to sincerely thank Mother and Daddy-O for making this trip possible.  Four days with my littles is not for the weak at heart, considering they had ALL SORTS of sports, tests, homework and the likes.  I also must thank Honey’s mama and my sweet friends JS and TC for helping cart the boys around when Mother and Daddy-O couldn’t be on opposite ends of Atlanta at the same time.

I cannot wait to share every single detail with y’all over the coming days, as it surpassed all expectation.
xoxo