Over the weekend I had the great pleasure of introducing John to one of the deep South’s most quintessential snacks: Coke & peanuts.  It’s almost a rite of passage down here to sit on a porch, in a pick-up or even at the filling station and savor this salty sweet goodness.  I had picked up a few tall glass bottle Cokes for the holiday and, when we found ourselves sitting on the porch on a steamy afternoon, I knew it was high time my near ten-ager had his first one.  Needless to say, he was smitten.

For the sake of this blog post and since I figure y’all north of the Mason-Dixon are scratching your heads right about now, I tried to find some history on this long standing tradition.  Come to find out, a Coca-Cola historian tried to answer the very same question two years back.  His research leads him to believe that the combo “was likely born of country store commerce. Think of Coke and peanuts as a prototype fast-food for the 20th century South.”  It seems the first package of peanuts may have been poured into a glass bottle of Coke as early as the 1920s as packaged, already shelled peanuts from Planters, Lance and Tom’s began showing up at country stores and gas stations where the familiar contour bottle of Coke was already being sold.  It seems this snack was really quite functional, with working people who may not have had a place to wash up pouring the peanuts directly in the bottle to keep clean.  Other theories are that  combining the two made it easier to drive a stick shift on the back roads of Central Georgia (exactly how I learned to drive), or that the tradition began in order to leave one hand free to smoke. 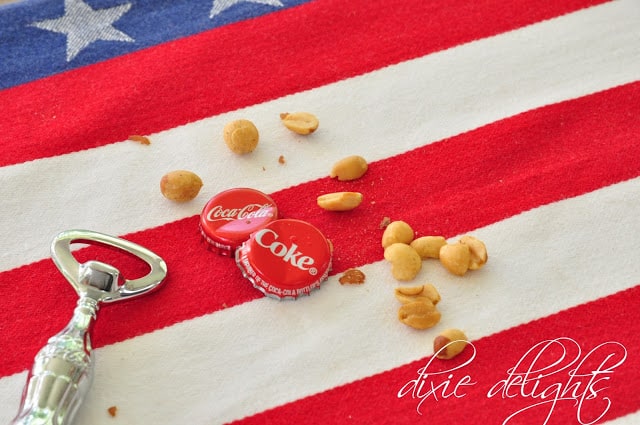 No matter how or why, I am sure am glad someone thought up this so-Southern treat many moons ago.   There’s nothing more Southern, or more American, than spending a summer afternoon sipping on an ice-cold Coca-Cola filled with salty peanuts.  Nothing.