If I was told that only one thing we did over the course of our sixteen day trip could stay ingrained in my memory forever, I know without a doubt that it would be our time at Pearl Harbor.  It was one of the most moving experiences of my life and I am so very thankful that we were able to bring our boys to Pearl City.  Like all of us, I know they will get their crash course in World War II somewhere along the way.  But I think it’s hard to grasp the events of that horrific December night in 1941, and understand how they led to America’s entry into World War II without visiting this sacred ground.  I’m forty and I finally get it. 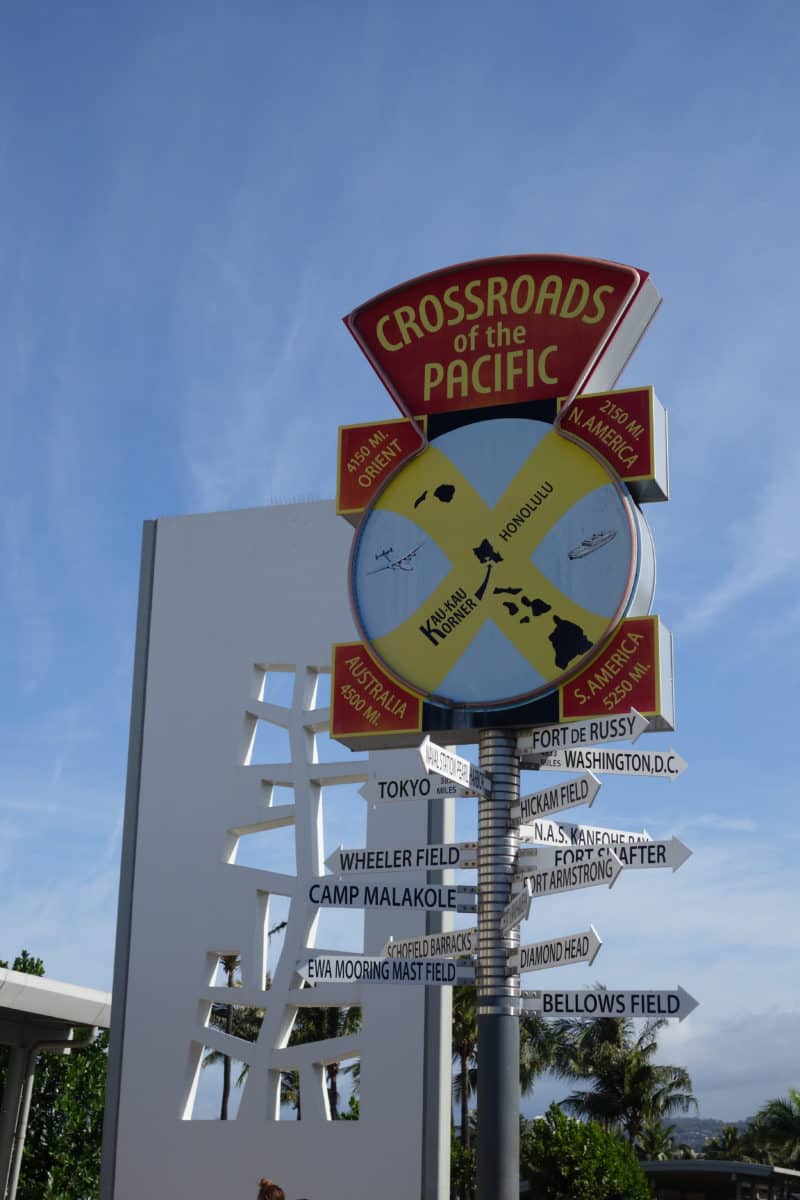 The National Park Service has done a remarkable job with the entire Pearl Harbor Visitor Center.  There are two museums that tell the story of the attack on Pearl Harbor and World War II, as well as outdoor exhibits throughout the grounds.  We did the self-guided audio tour and all loved it!  The entire tour is engaging and educational. 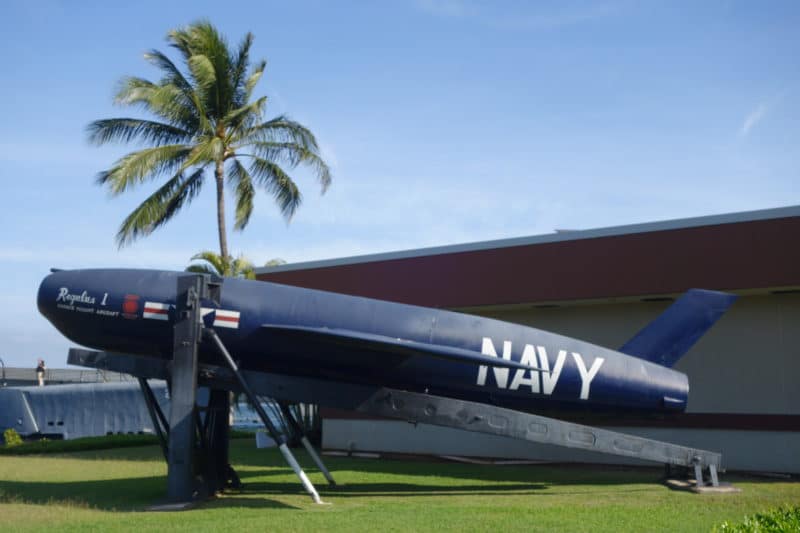 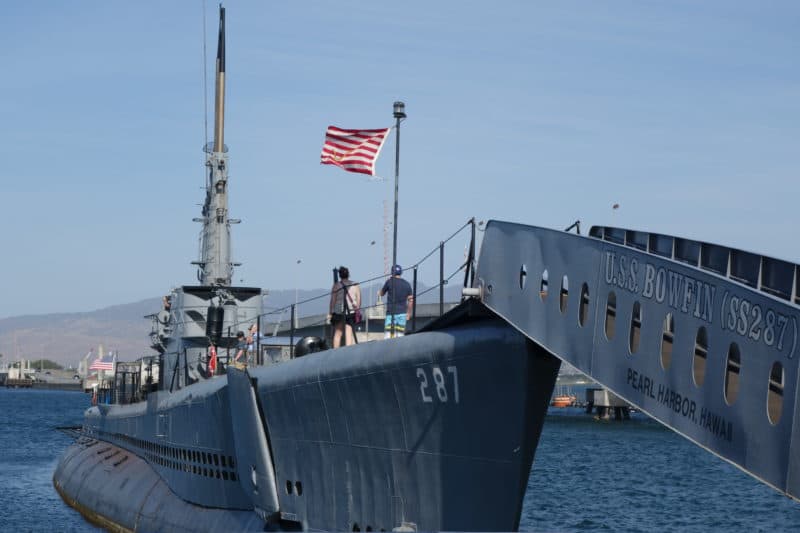 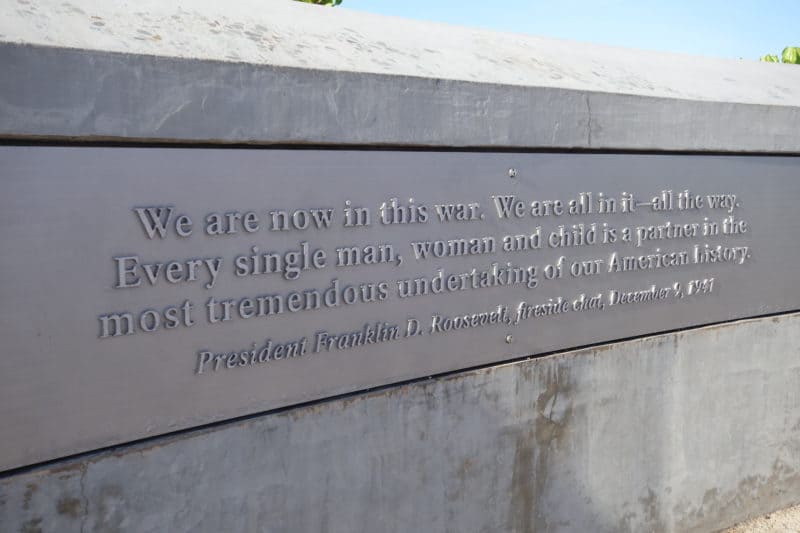 The USS Arizona Memorial tour includes the most wonderful and moving movie on the attack on Pearl Harbor, followed by a ferry ride to the memorial. My littles watched the entire movie with rapt attention.  I’m not sure they moved an inch the whole time.  It did a sensational job of transporting you to Honolulu on the night of December 7, 1941.  We learned just how young most of these men were, how they excitedly left their homes to come live on the exotic islands of Hawaii.  But then reality settled in and they were homesick, and didn’t have a lot of money.  We read their letters to home, and we learned that most days at Pearl Harbor were uneventful, spent practicing drills.

On that fateful night, while most of the officers and crew stationed at Pearl Harbor were enjoying a military concert, six aircraft carries and more than 350 Japanese fighter planes were secretly crossing thousands of miles of Pacific Ocean.  We learned that the US actually detected the first wave of planes on an early form of radar, but they were expecting the return of their own planes from California and didn’t worry about it.  And then, as the sun rose over Pearl Harbor, the bombs came whistling down.

The surprise attack lasted ninety minutes later.  In those minutes, over 2,400 American sailors, soldiers and marines were dead, and eighteen ships, including our five battleships, were sunk or run aground.

The USS Arizona was one of those.  She exploded and sank, killing nearly 1,200 officers and crewmen. While the American Navy rebuilt many of the other ships, Arizona could not be salvaged.  Seventy-five years later, she still lies at the bottom of Pearl Harbor with her crew trapped inside.  The USS Arizona Memorial straddles her hull. 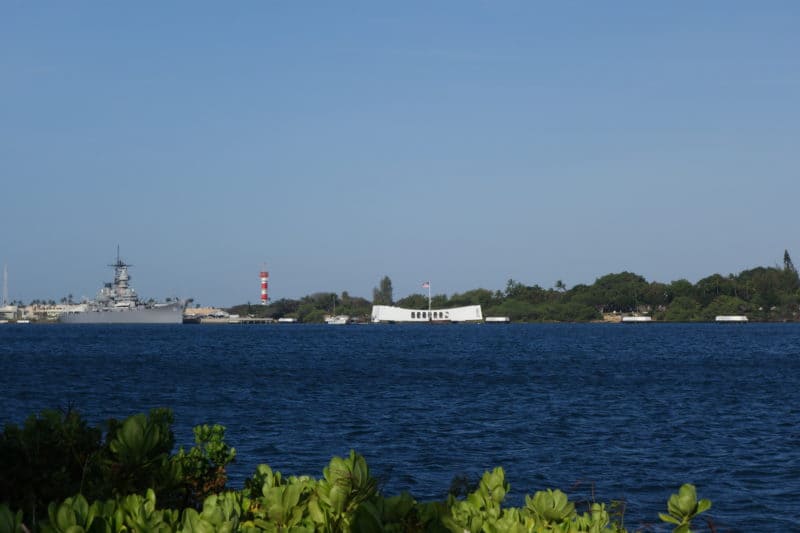 There was not a dry eye in the theater as we solemnly filed out to take our ferry over to the memorial.  But, sadly, the Navy suspended all ferries just before our turn so we weren’t able to go.  We talked about going back every day after, but it remained windy all week, and none of the ferries left during our stay.  On the day before we left, we had a helicopter tour and our pilot asked what we’d done during our visit, just making casual conversation.  I mentioned Pearl Harbor and how sad I was that we didn’t get to take the boat to the memorial.  Well, at the very end of our tour, he flew us right over Pearl Harbor and circled the USS Arizona and memorial.  I was nearly in tears. 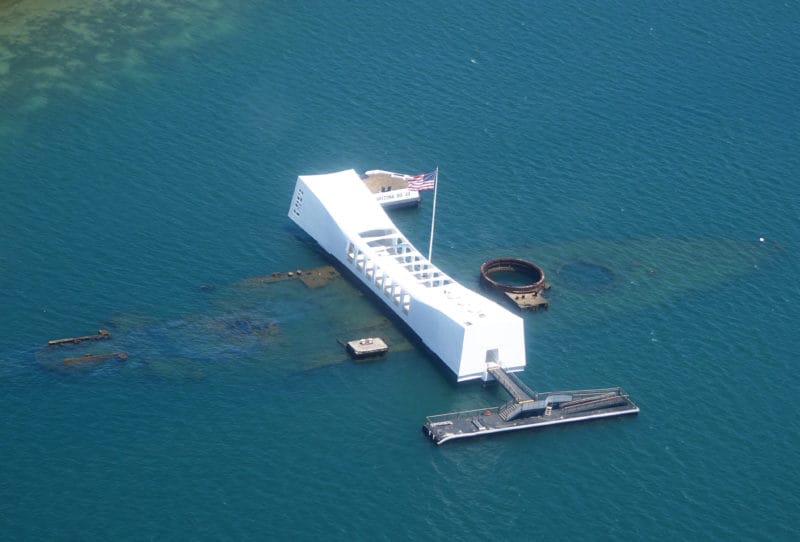 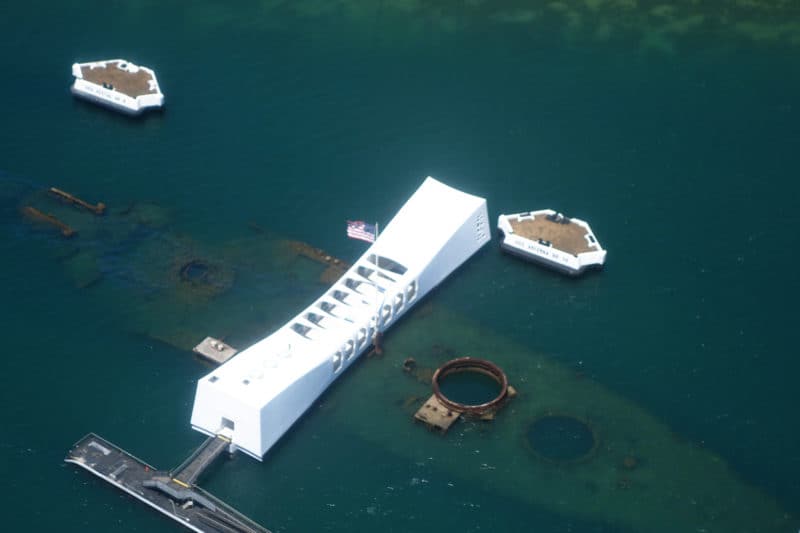 The massiveness of Arizona became clear when standing next to one of her anchors, recovered from the harbor.  We saw a picture of it on the battleship and it was merely a dot in size.  Even after seeing her, it is so hard to believe that she’s still there in the harbor, just right below the surface all these years later, with her crew inside. 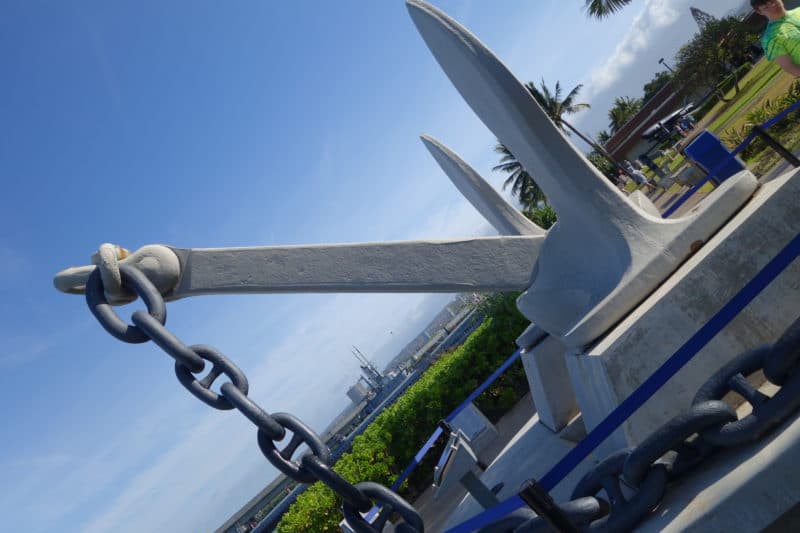 I spent a great deal of time processing all that I learned, while reading Eleanor Roosevelt’s war time prayer, kept in her wallet during World War II, again and again and again.  It still rings so true today.

Dear Lord,
Lest I continue
My complacent way,
Help me to remember
Somehow out there
A man died for me today.
As long as there be war,
I then must
Ask and answer
Am I worth dying for?

My aunt, Victoria Jean, was born on Victory Over Japan Day.  I can now understand probably just a fraction of how emotional and wonderful and monumental that day must have been for my grandparents – welcoming their first child into the world on the day the the surrender was announced. 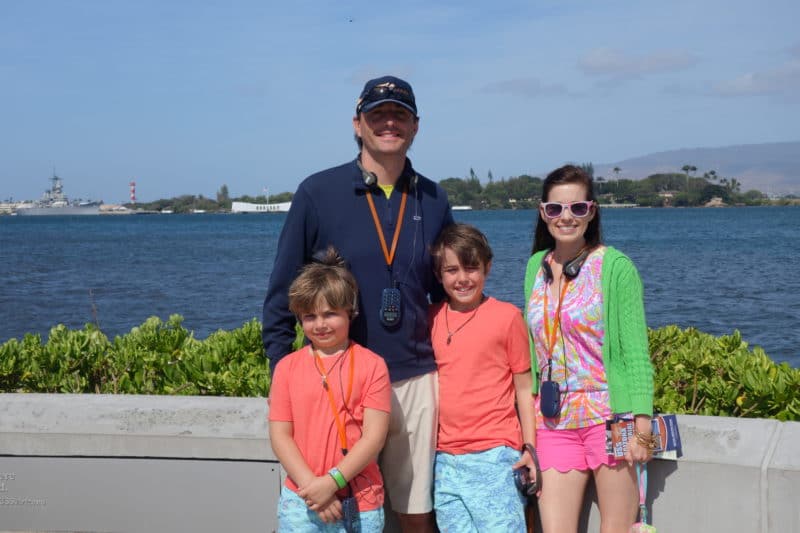 In order to reserve our tickets to the theater and ferry boat, you must purchase the audio tour online.  I want to say they were around $9 a piece directly from recreation.gov.  They go on sale sixty days in advance at 7AM Hawaii time.  You can certainly walk up and claim one of the many free tickets they give out each day, but I will say that at 9AM the movie/ferry time they were handing out was for 1:15PM.  It’s worth buying in advance online!  Also, bags are not allowed inside, so store your stuff in the trunk before arriving and just carry a wallet and camera.