Today marked the last gluttonous day before Lent starts in the morning, and we celebrated with our traditional Fat Tuesday supper.  Jambalaya and garlic bruchetta and King Cake and Throw Me Something, Mister cocktails, OH MY! 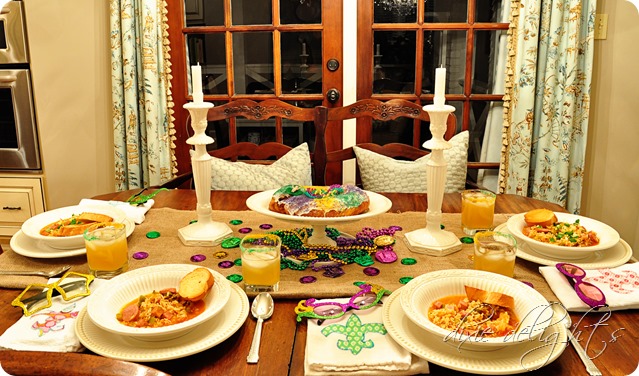 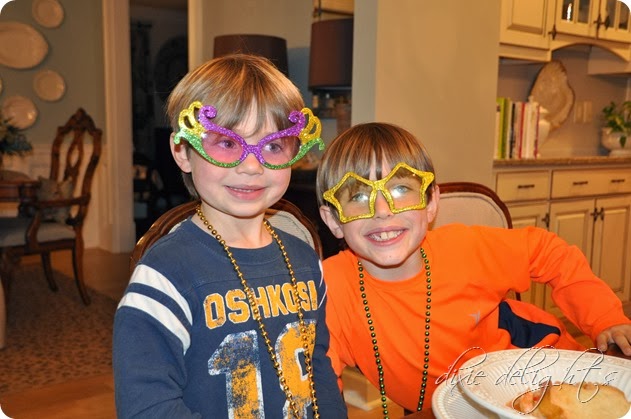 I love how the littles get so involved in our little celebrations.  The baby helped me set the table this afternoon, and the PCP’s eyes went wide when he hopped off the school bus to see what was in store for the evening.  And that’s the sum of why I do it all :-)  We used the same little Dollar Tree coins, beads and glasses that we’ve employed the last few years. 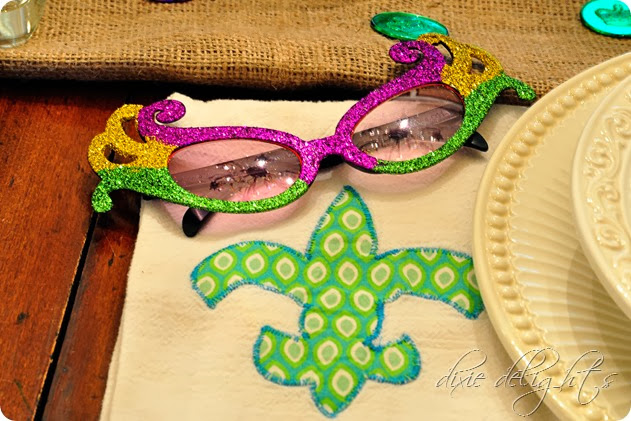 Mother made the four fleur de lis dish towels a few years ago when she first got back into sewing, and I love to put them to use as napkins during Mardi Gras. 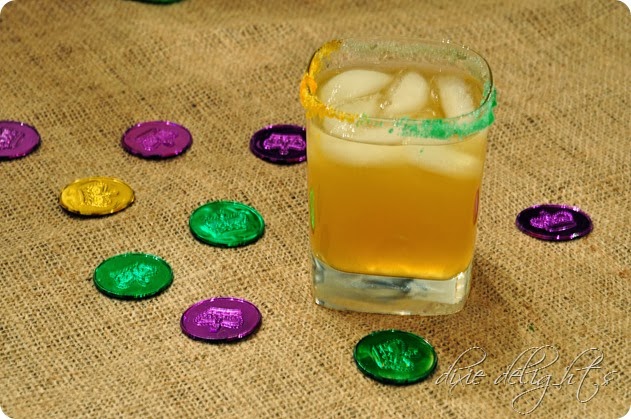 Sister, Mother and I “invented” the Throw Me Something, Mister King Cake inspired cocktail a few years ago and it’s still a favorite.  You can find the recipe here.  I love to rim the glasses with tinted sugar – it’s SO easy!  To make the sugar I put a little less than 1/4 cup of white sugar in a zip lock and then add a few drops of food coloring to the bag.  I shake and press and massage it around until it is distributed.  And when Mardi Gras is over, I save the rest of the green bag for St. Patrick’s Day treats. 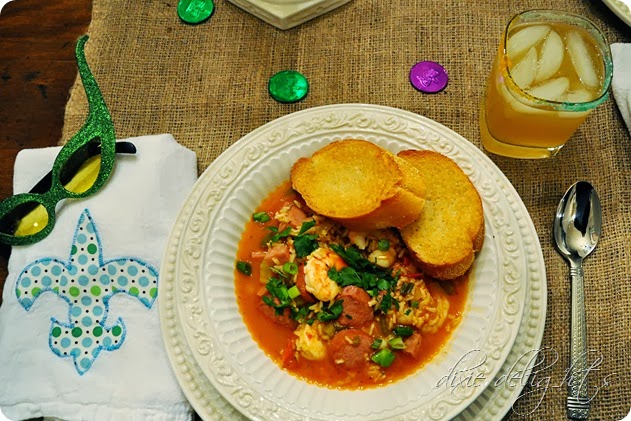 Since I am perpetually in an Ina-obsessed state, I switched out my standby Jambalaya recipe for her Shrimp and Sausage version.  It took a hearty amount of chopping, but was SO worth it.  Everyone gobbled it up and we have plenty for leftovers.   Shrimp & Sausage Jambalaya Source: Ina Garten Serves 6-8 1 tablespoon olive oil
1 pound sausage, such as kielbasa or Andouille (I used turkey sausage just because I like it better.)
1 pound smoked ham, cubed
1 tablespoon butter
1 medium onion, diced
1 cup celery, diced
1 green bell pepper, cored and diced
1 red bell pepper, cored and diced
1 cup seeded and diced tomato
3 garlic cloves, minced
1 jalapeno pepper, seeded and minced OR ½ teaspoon cayenne (I used jalapeno)
2 teaspoons diced fresh oregano
1 teaspoon diced fresh thyme
2 tablespoons tomato paste
6 cups chicken stock, preferably homemade (I buy the organic stock at Costco)
3 cups long grain rice, rinsed (I used brown because I had it.  Needs to cook a little longer than she says below.)
3 bay leaves
2 teaspoons kosher salt
1 teaspoon freshly ground black pepper
6-8 dashes Tabasco (optional – I omitted)
½ cup chopped scallions divided
¾ cup chopped fresh parsley, divided
¼ cup freshly squeezed lemon juice
1 pound medium shrimp, deveined (I also took the tails off before cooking) Heat the oil in a large Dutch oven or black iron pot over medium heat, add the kielbasa and sauté for 8 to 10 minutes, until browned. Remove the kielbasa to a bowl, and set aside. Add the ham to the same pot and cook 8 to 10 minutes, until lightly browned. Remove to the bowl with the kielbasa, and set aside. Add the butter, onion, celery and peppers to the same pot and sauté for 8 to 10 minutes, until the onion is translucent. Add the tomato, garlic, jalapeno or cayenne, oregano, thyme, and tomato paste and cook until all the vegetables and herbs are blended well. Add the stock and bring to a rolling boil. Stir in the rice, and add the sausage, ham, bay leaves, salt, pepper and Tabasco. Return to a boil, reduce the heat to low and simmer, covered, for 20 minutes. Add ¼ cup of the scallions, ¼ cup of the parsley, the lemon juice and the shrimp, and stir well. Cover the pot, remove it from the heat and allow the jambalaya steam, for 15 minutes, before serving.
Garnish with the remaining ¼ cup scallions and ½ cup parsley, and a dash of Tabasco, if desired. 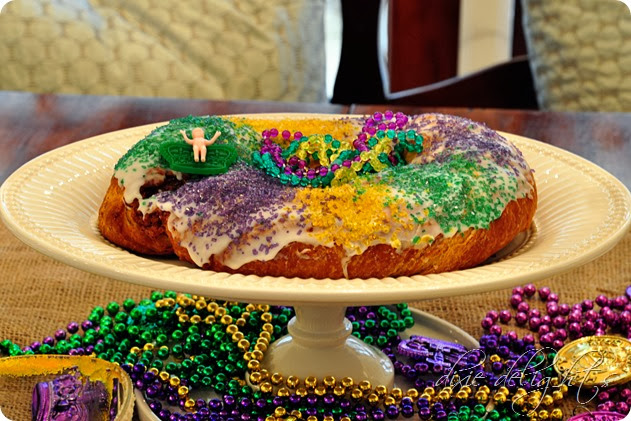 The littles (and bigs alike) have loved making a “King Krispie” cake the last couple of years.  Buuuuuttttt, when the lady in the Publix bakery was pulling a cinnamon King Cake out of the oven as I happened by, I couldn’t resist.  I had her box it up and took it home to drool over for the next few hours.  It was REALLY good.  Almost as good as the ones bestie B’s mama sent us from New Orleans every year in college.  If tomorrow wasn’t Ash Wednesday I’d totally be eating the rest for breakfast :-) 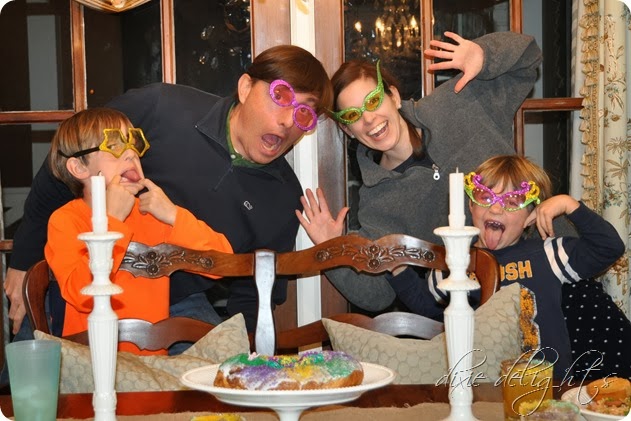 It was a great night in the W house!!  Laissez les bon temps rouler! xoxo