If you’ve been following along with our Instagram escapades, you’ll know that Christmas 2014 was the holiday of Ticket To Ride 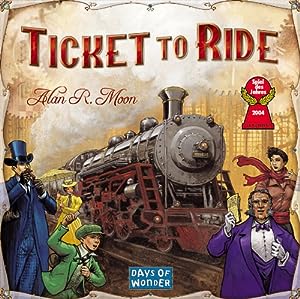 John received the game from my parents for Christmas and we have played it every day, multiple times a day, since then!  The adults even stayed up late after the littles were fast asleep to play the game, sip scotch and down bags of Byrd’s cookies. 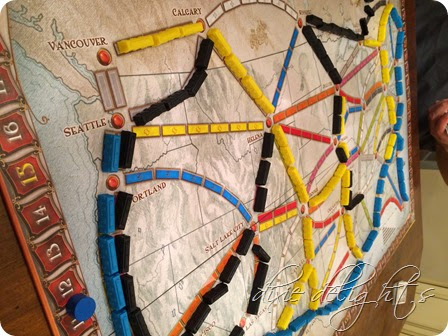 It’s for ages 8+ and 2-5 players.  The directions seemed daunting but don’t fear, we all picked it up after just one game, even John.  Here’s the premise of the game:

October 2, 1900 – it’s 28 years to the day that noted London eccentric, Phileas Fogg accepted and then won a bet that he could travel “Around the World in 80 Days.” Now, at the dawn of the century, some old friends have gathered to celebrate Fogg’s impetuous and lucrative gamble – and to propose a new wager of their own. The stakes: $1 million in a winner-takes-all competition. The objective: to see the most cities in North America – in just 7 days. Ticket to Ride is a cross-country train adventure game. Players collect train cards that enable them to claim railway routes connecting cities throughout North America. The longer the routes, the more points they earn. Additional points come to those who can fulfill their Destination Tickets by connecting two distant cities, and to the player who builds the longest continuous railway.

There’s really nothing better than a night gathered around the kitchen table with friends and family playing a good old fashioned board game :-)  This one is good for hours and hours worth of fun, and John has learned a little geography to boot.

With that, I’ve GOT to get started on our lasagna if we’re going to have supper on the table before midnight.