A normal day around here would probably drive even the sanest soul to the loony bin.  So, while the antics on today’s trip to the Jeep dealer for an oil change and emissions test were pretty normal for me, I knew from the sidelong glances and shocked faces that most of the others forced to spend two hours of their day with me and my littles surely felt like they were having an outer body experience.  That, or that I have zero control over the two un-caged monsters that were accompanying me.

Anyhoo, I thought I was being quite crafty by running through Krispy Kreme to pic up a dozen hot ones on the way in.  Not only were they to serve as breakfast for the littles and me, but they were further intended to act as a sweet bribe to encourage the mechanic to finish up my car lickety split.  The waiting room was so packed that I was forced to share a chair with Cookie and his chocolate glazed sprinkle confection (if you’d ever seen him eat a donut you’d be feeling really sorry for the state of my jeans), so the three of us settled into our two chairs and, all messes aside, both stayed quite as a church mouse as they dined on their donuts.  And I was feeling quite pleased with my forethought.  But as soon as the last bite was consumed, they were back to their usual antics.  At this point they were just being a tad loud and a bit silly.  But boys should be boys, right?!?!

Well, thirty minutes into our wait, John asked the lady sitting next to us what she reading. When she disclosed the title of her book was “His Sexy Bad Habit” I liked to died of embarrassment.  Oh. Em. Ge.  (Who in their right mind would bring that book out in public to actually be observed reading it???  And who would actually tell a five year old who can’t read the real title?)  Seeing as that opened a floodgate of questions (“what’s a sexy bad habit?”, “who’s that guy” (pointing to the scantily clad man on the cover), and “bad habit. bad habit. bad rabbit.” from Cookie), I was surely beet red as I promptly vacated our seats, muttering apologies, and moved us to the “Kid Corner.”  I usually try to avoid these gnarly spaces at all costs, but seeing as things were heading south at a rapid rate, I figured we should remove ourselves from the general population.  So, for the next ninety minutes, my littles scrubbed themselves all on the dirty floor, man-handled the decrepit toys, had a jumping contest off of the chairs, pressed their faces onto the glass divider separating us from the rest of the living world, and just generally bounced off the walls of our little room.

At the end of the day, I don’t think it was the donut bribe that got us out of there.  Rather, I believe it was the sheer horror of the site manager when he peeked in to see if we were “doing okay.”

It’s been three weeks since I backed into our beastly garage door, knocking it off of its track and putting the final nail in its coffin.  Since the darn thing was so gigantic, the largest they make in fact, it took all of this time to receive the replacement.  And she’s a beaut.  Bless the… Read More

This week’s Sunday Supper was so-Southern, so yummy and the the perfect end to an all around great day.  I’ve made the meal a couple of times in the last year – both recipes come from Southern Living – and it not only does it smell divine baking away in the crock pot, but it’s… Read More 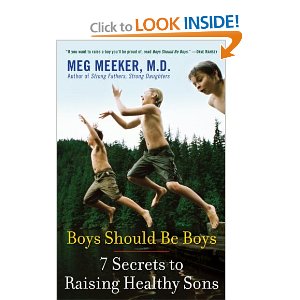 Unlike last month where I had to fess up to my vampire addiction, I return with a much more respectful book… Boys Should be Boys: 7 Secrets to Raising Healthy Sons by Meg Meeker. While most of the book is really just common sense, it always helps me to reground myself in written words.  As… Read More

I truly consider myself to be practical in product selection.  I wear Bare Minerals makeup, use Purpose moisturizer and Oil of Olay cleanser.  I do, however, once a year, splurge on Bumble and Bumble hair care products.  Sister introduced me to this line three years ago and it was love at first shampoo.  Oh my,… Read More

Last weekend we found ourselves in desperate need of a baby sitter on very short notice.  Honey’s favorite Uncle J and sweet Aunt S were visiting from Texas and we wanted to enjoy a meal and conversation with them in a way that we couldn’t do with two littles in tow.  So, I promptly called… Read More

Okay, so I’m kind of stifling my laughter over here as I, once again, consider the topic of pajama jeans. Remember my night out with bestie F and the five things I deemed you need to know? Well, last night besties C, S and I headed out to celebrate her birthday in our traditional fashion… Read More