Last night brought the game that is always my very favorite of the season…my snack night!!  This is the PCP’s fifth season and I invariably spend every game leading up to mine cooking up ideas.  I’ve done Cracker Jack cupcakes, Cracker Jack bags, Baseball Pies, Baseball Doughnuts and now the Baseball Glove cupcake cake!!  Some little stinker obvi stole one red m&m when I wasn’t looking :-) 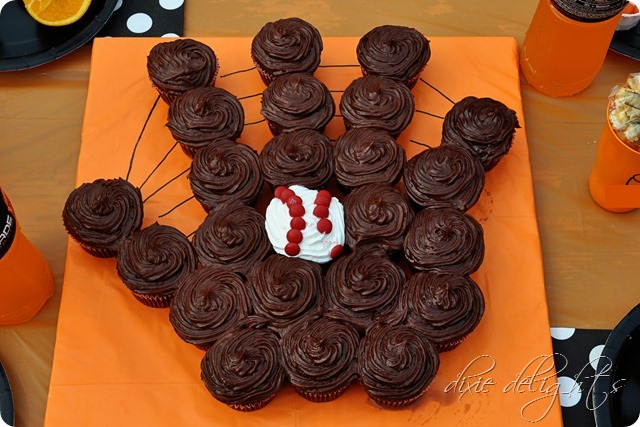 This was super easy to pull off and inspired by something I came across on google images.  Bake a box of cupcakes and be sure to get all two dozen out of the batch.  Lay them out in this arrangement on a your serving piece (this lovely thing is actually our checker board wrapped in foil and then a piece of plastic disposable tablecloth) before icing.  Once in place, ice twenty-three cupcakes in chocolate and the last one in white.  I stuck red m&m’s in the icing to make the laces on the baseball cupcake.  It was Honey’s fab idea to draw the glove’s webbing on the cake plate/checker board.  If he’d had this genius idea before the very minute we were walking out the door, I would have piped them on with chocolate icing.  Alas, I am sure we have many, many more seasons of baseball ahead of us between the two littles.

Speaking of cupcake cakes, I must admit that this one turned out immensely better than my last attempt at a cupcake cake…do not try this at home, ladies. 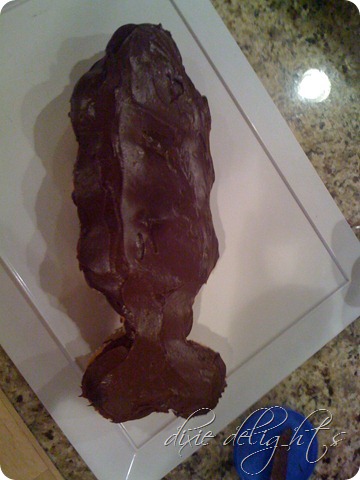 Neeedless to say, my “bat” cake didn’t make it to the pee wee ball game. *bwahahahahaha*  Though, it undoubtedly would have served me well at the one gazillion bachelorette parties I was attending a decade ago.
But I digress…the rest of the snack shaped up like so… 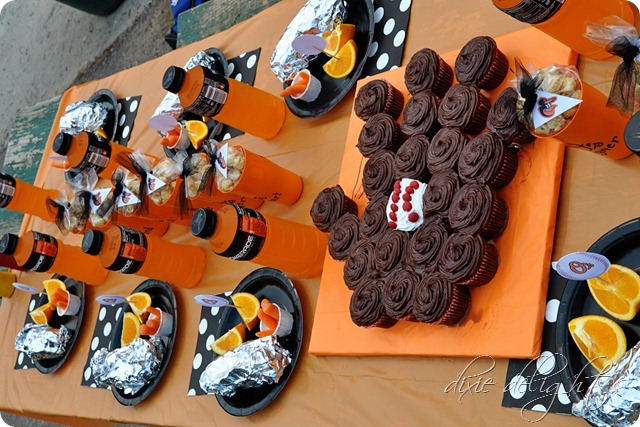 The boys noshed on ball field hot dogs, orange slices with an Orioles baseball pick, and baby carrots with ranch dressing.  I got so into picking out orange food and drink that I had to force myself to step away from the cheese poofs (or so we call them around these parts.) 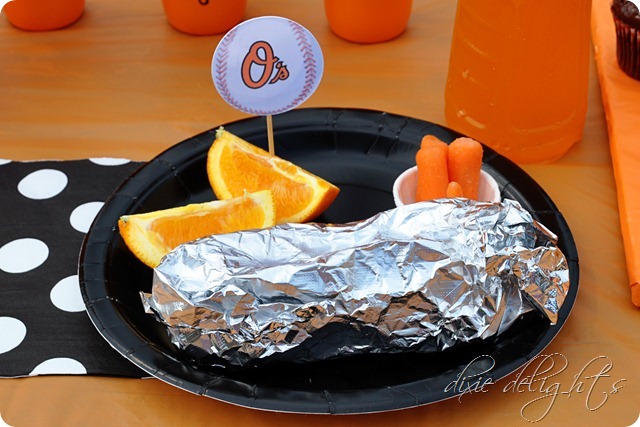 And because I’m a glutton for punishment (and because WalMart seemed to have a plethora of orange food, drink and party ware), I painted a party favor cup for each little ball player and filled them with Cracker Jacks.  The cups came in a rainbow of colors and were just $1 (or was it $2?) for a set of six.  In fact, everything you see here came from my super WalMart – table cloth, plates, cups, napkins, food and drinks! 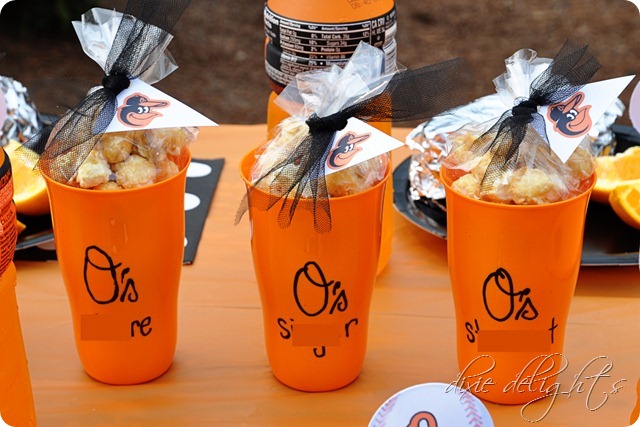 I also managed to snap what is probably my favorite picture ever from five baseball seasons combined.  Daddy and son bumping fists after a great hit and run to third base. 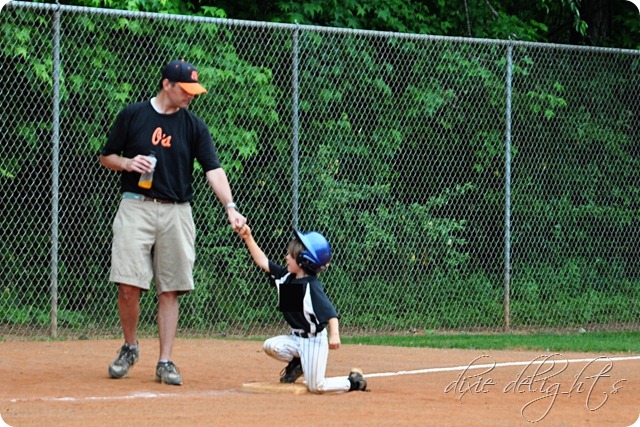 No, the PCP did not get hold of some really bad orange-ish self tanning lotion.  What he did do is roll around in the dirt like an old fat sow (anyone else familiar with Bugs Bunny’s Hillbilly Square Dance??)  in an obvious effort to challenge my laundry prowess.  Honey called the maneuver that resulted in this look “a face down snow dirt angel.” 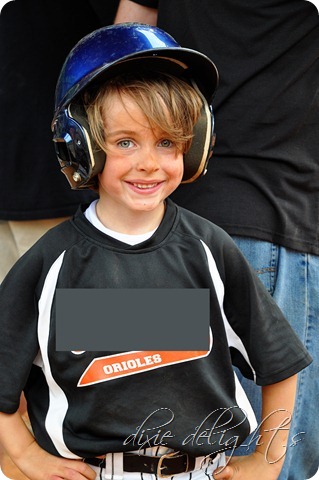 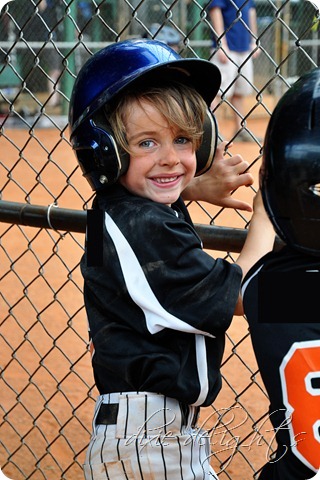 And no, the baby does not play ball.  Yet.  But he does gear up in the PCP’s old threads just in case he gets called up. 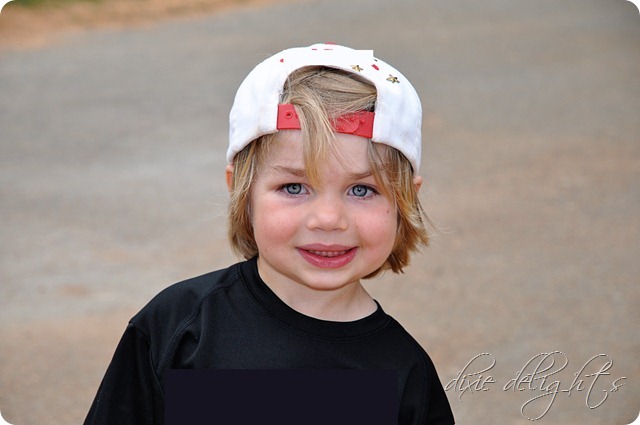 Just as soon as the PCP laid eye on the “special baseball cupcake” in the middle of the glove, he made it his mission in life to make it his own.  His team had barely given the last “good game” clasp when he bolted off the field (faster than he’s ever run on the field, mind you) to snatch it off the plate and take a huge territorial bite right out of the top.  This, my friends, is the (exceedingly orange) face of victory…he got the cupcake and they won the game to boot. 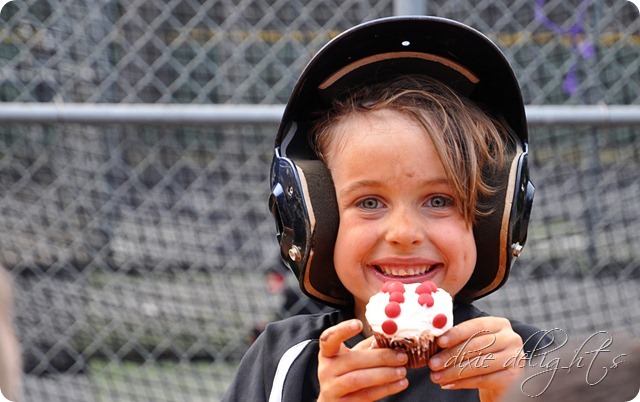 Happy weekend, y’all!  We’ll be back at the field again tonight!
xoxo

Flattered for the features at DIY by Design and Tip Junkie!