On one of the most gorgeous days of 2014, our entire family gathered to celebrate John’s First Communion.  It was a memorable day – full of love, laughter, a few tears of joy, family and some very special friends. 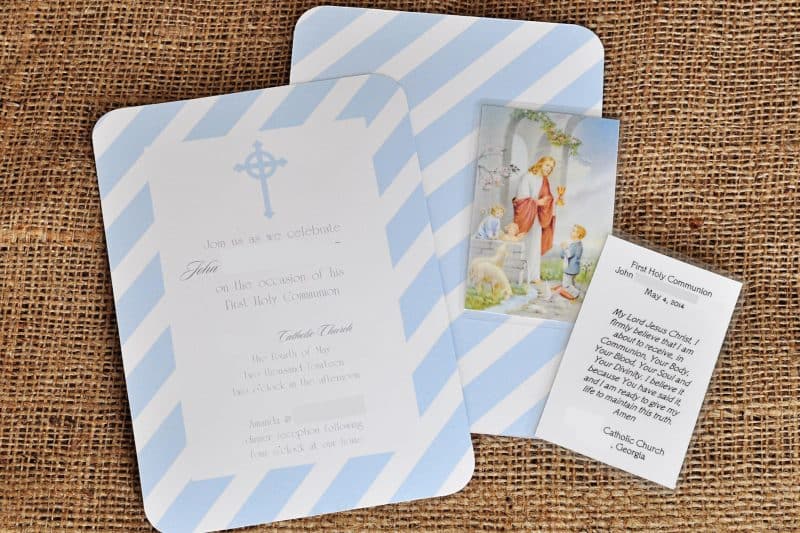 Invitations and Prayer Cards
John was so incredibly handsome in his Sunday best.  Mother brought a beautiful tie home from a London Catholic school tour years ago for all three boys to wear at their First Communion.  After a gross mis-description over the phone, I was so relieved to see it in person and can’t imagine him having worn anything else with his dashing seersucker pants, navy blazer and Irish linen monogrammed hanky. 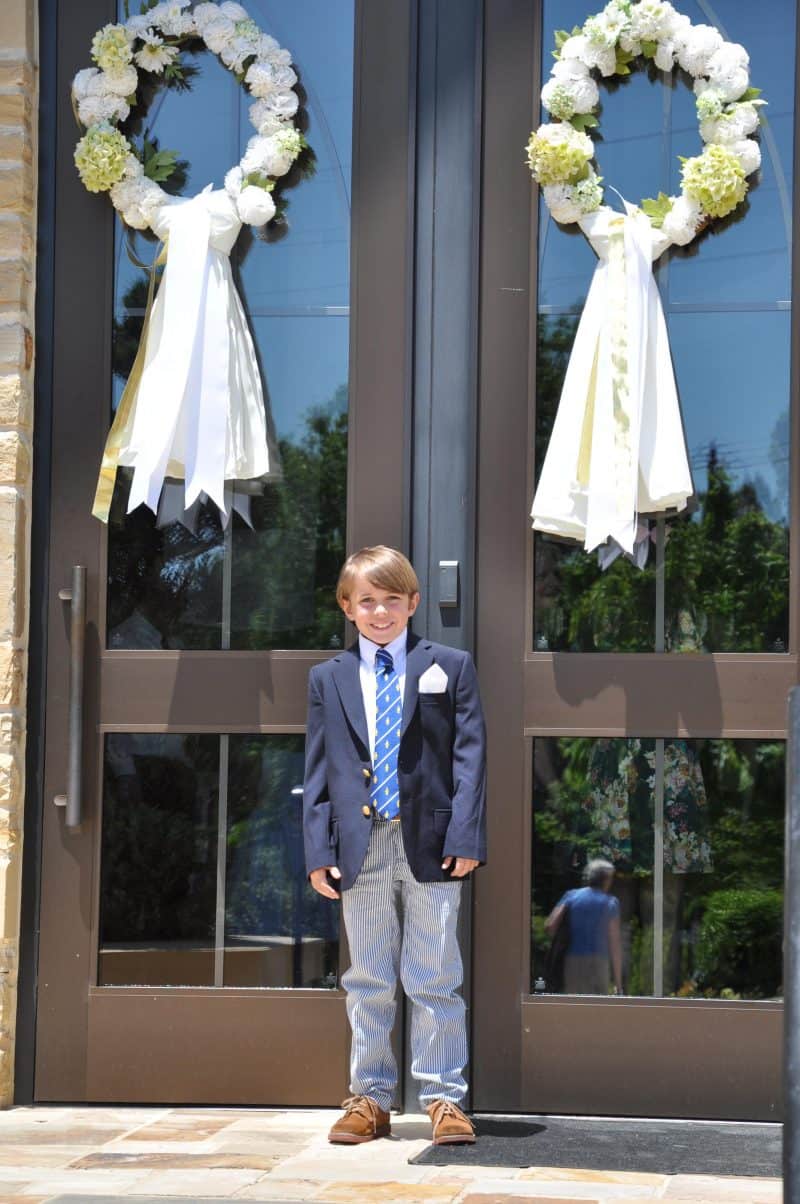 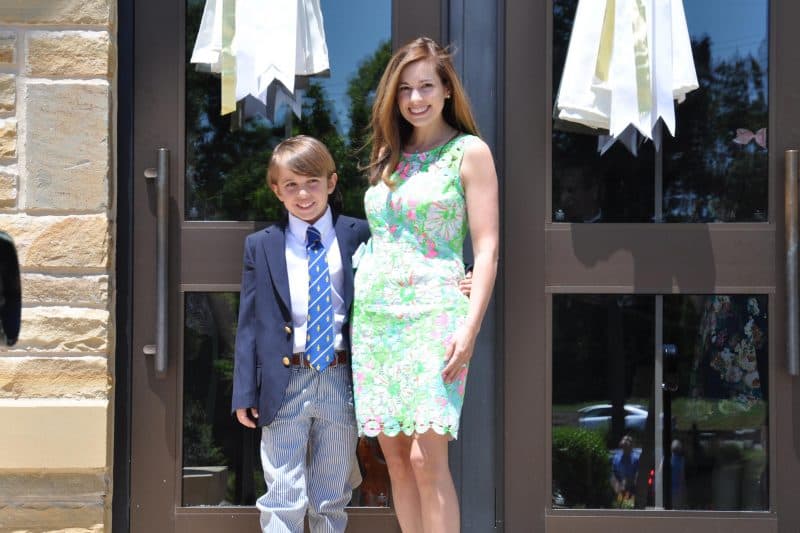 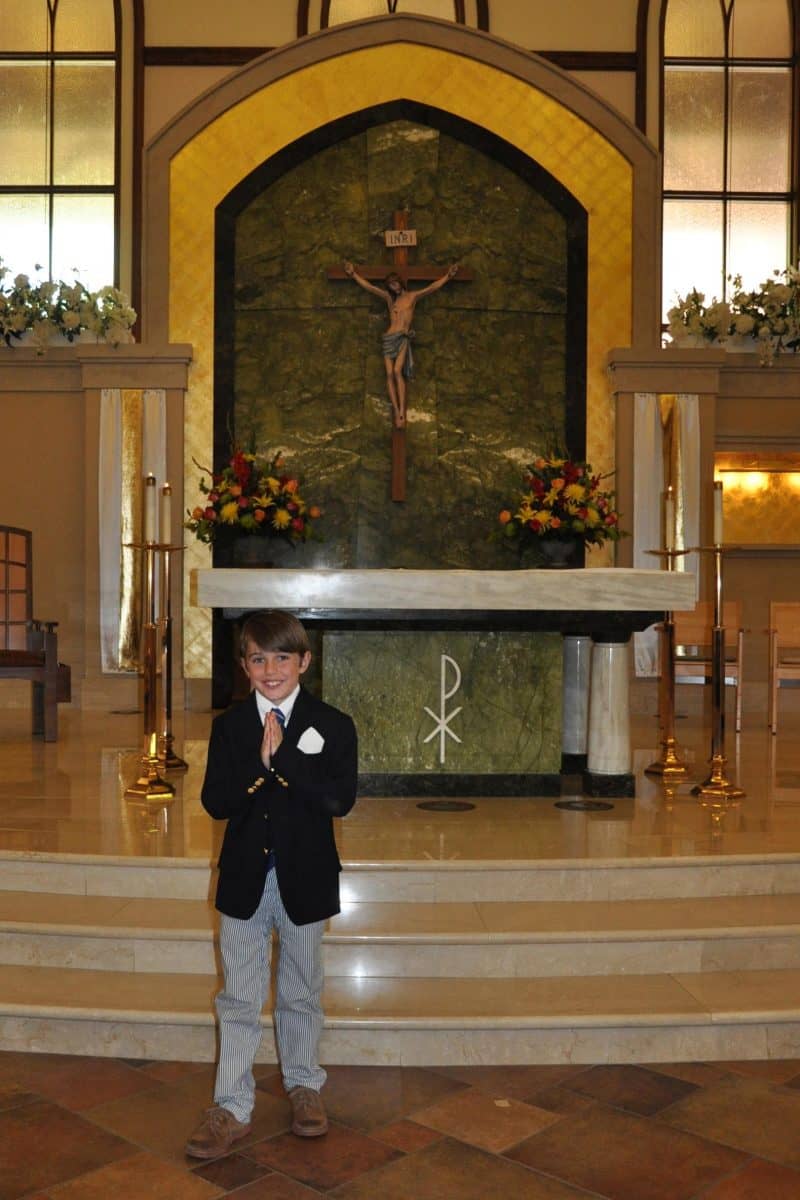 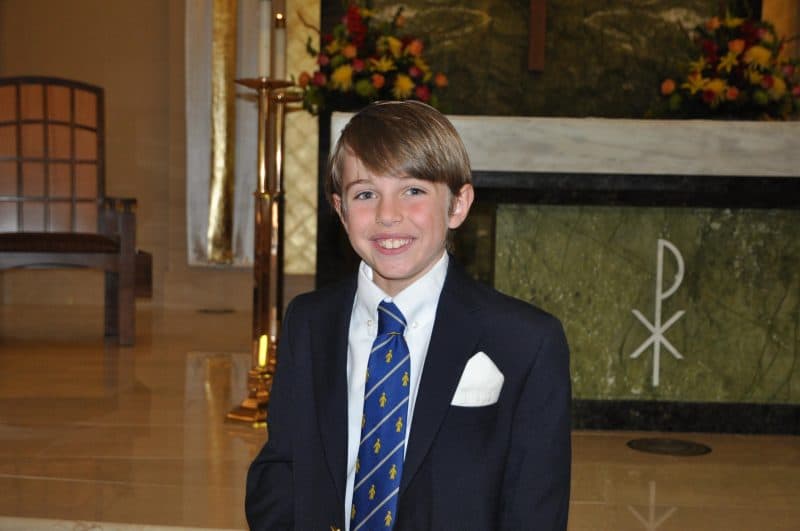 After two years of PSR (parish school of religion) preparation, he was so very excited that the big day was finally here!  Mother and I both welled up with tears when he processed out with the rest of his peers.  It was one of those moments when your heart just bursts with joy, wonder and gratefulness. 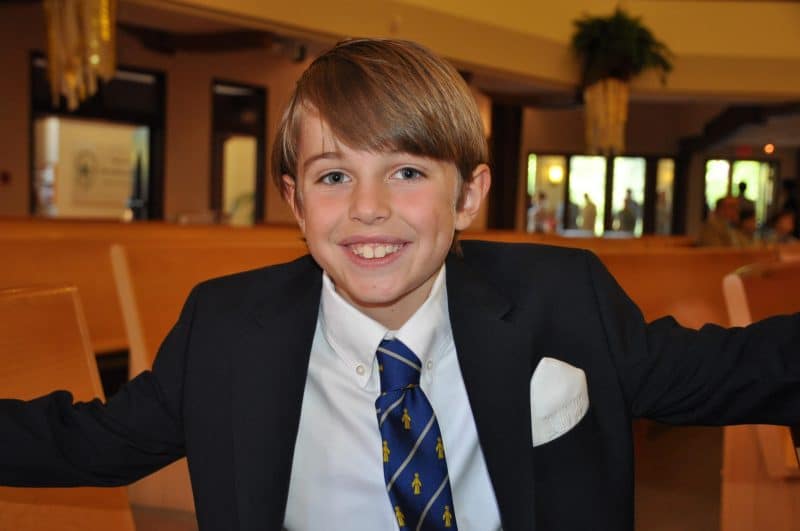 Each family had their own pew, marked by their sweet First Communion banners.  It was a lovely touch.  Most all of the family was in attendance, including his God parents (Sister and Uncle C), grandparents, Sister’s Mister, CeeCee and Bird.  My only regret for the day was not getting a picture of everyone together. 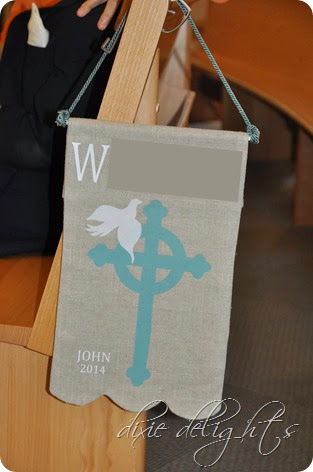 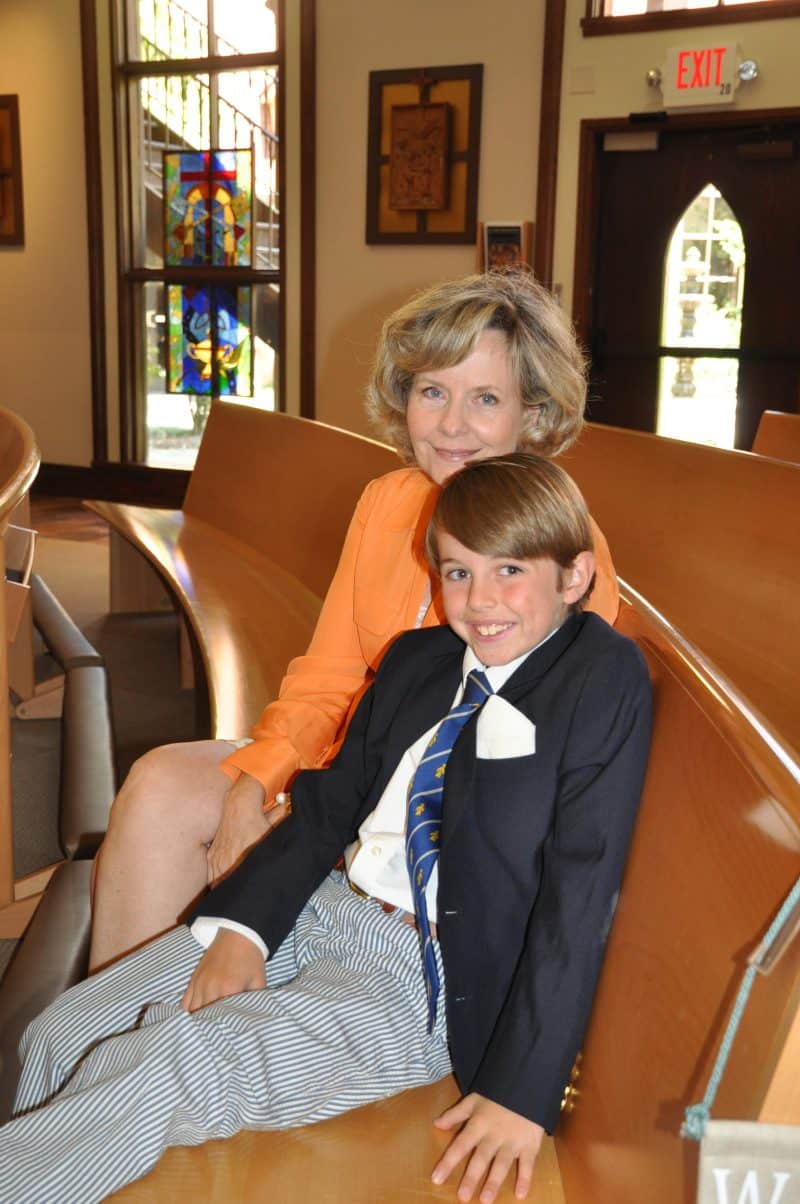 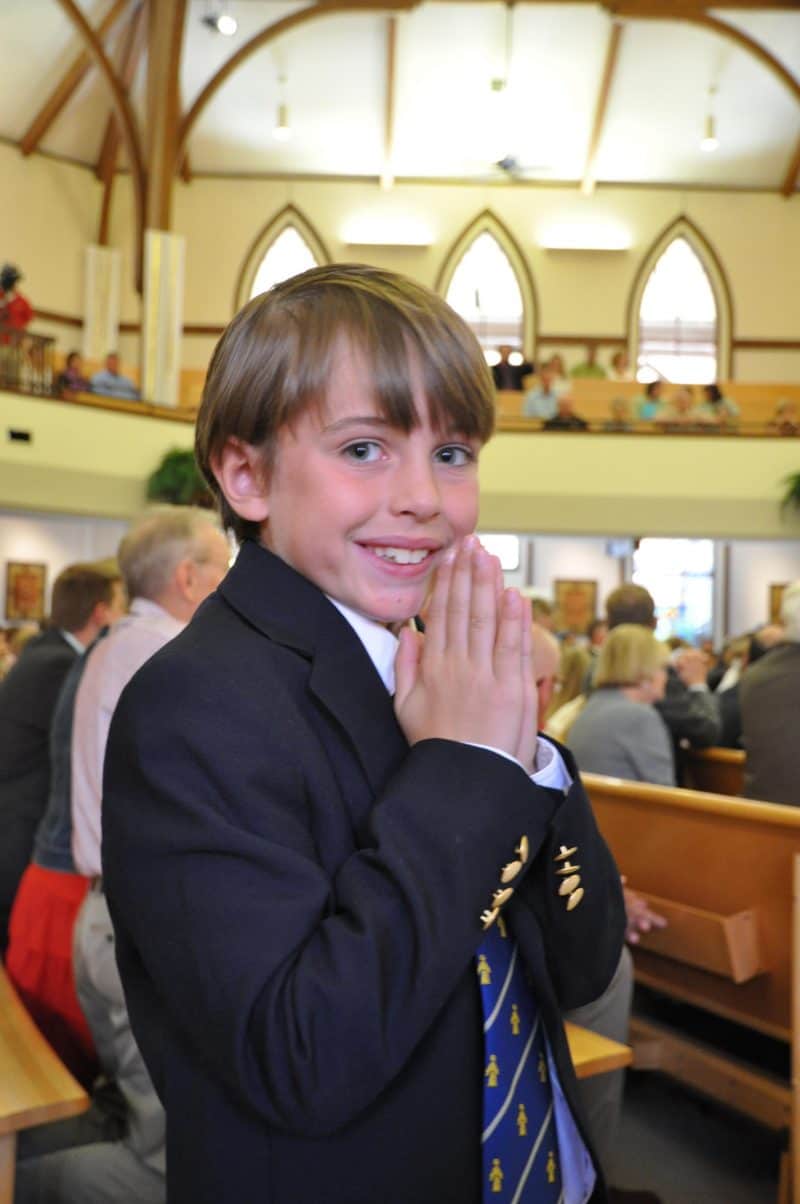 Our sweet boy receiving the body and blood of Christ.  Each little one went up one at a time to receive the sacrament. 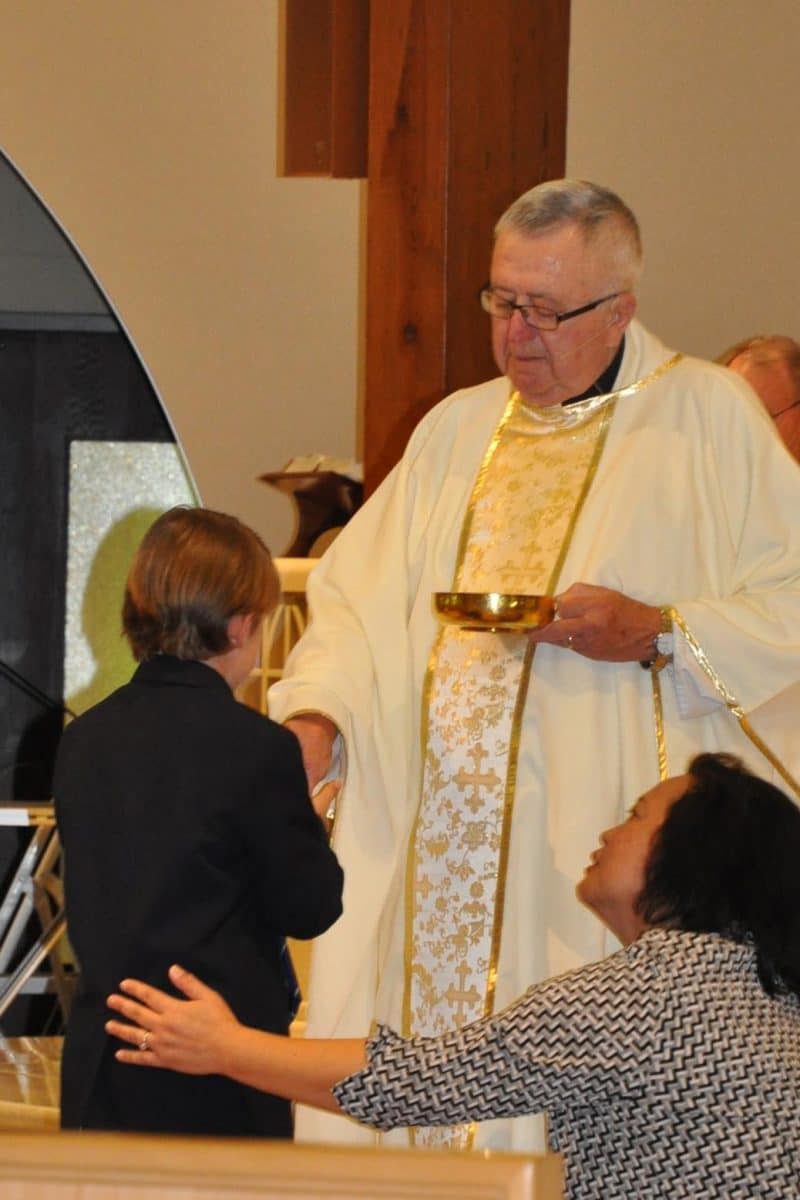 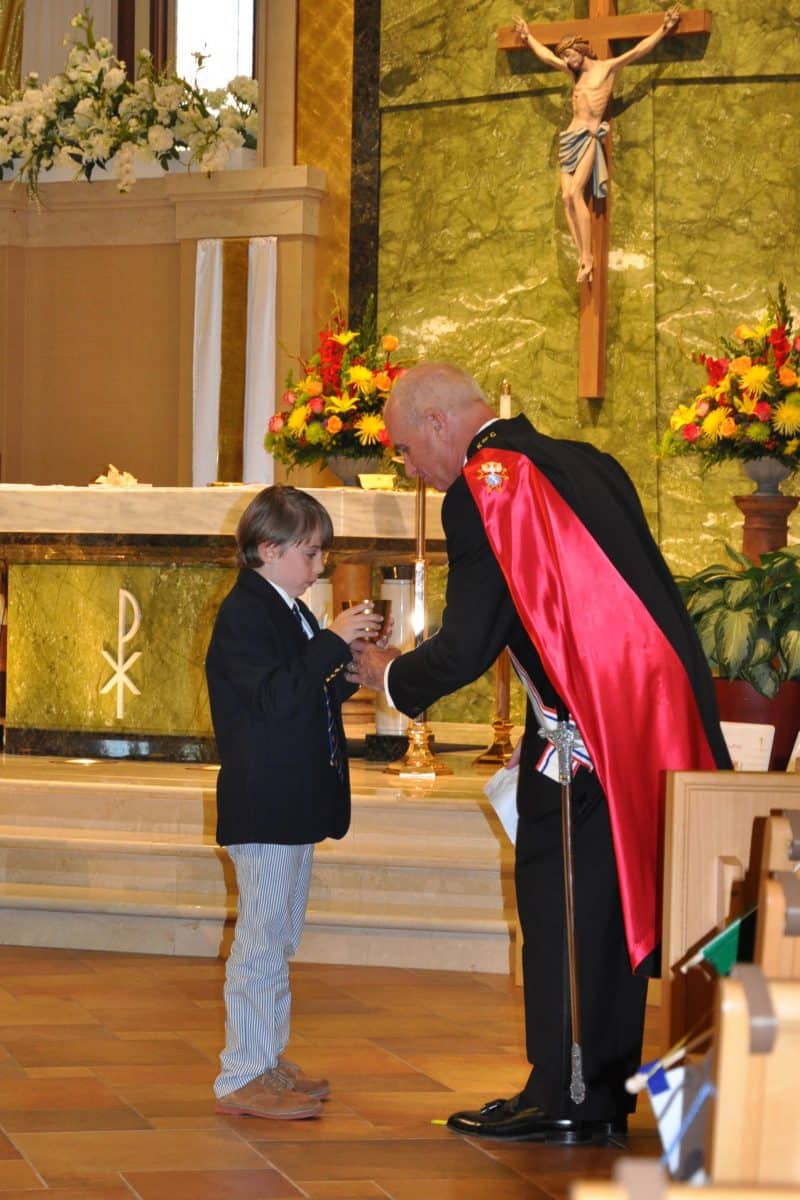 At the end of mass he was all smiles.  One of my favorite moments that I never want to forget was watching him in the line practicing all of the motions over and over.  He’d do prayer hands – bow – open hands – put it in his mouth – sign of cross – prayer hands – drink from the cup – prayer hands – repeat.  It was so very darling and SO like him. 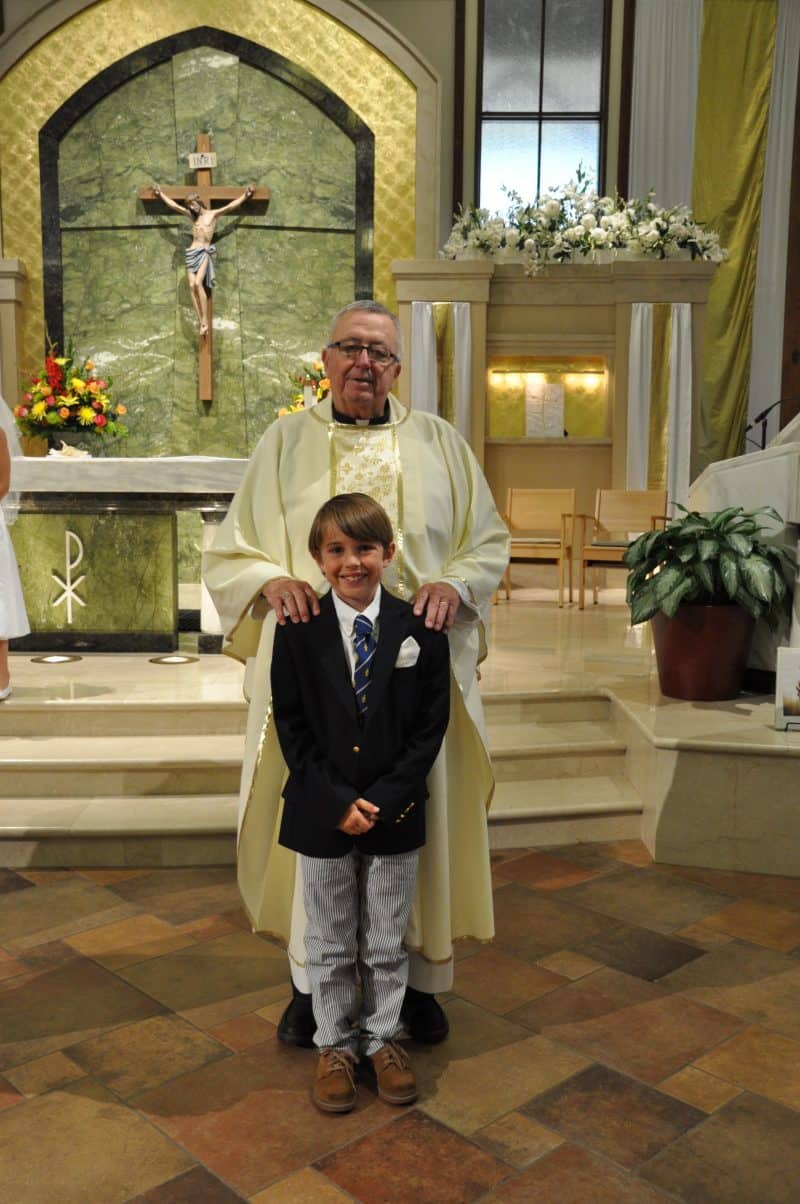 He positively could not wait to 1) find his bestie O and 2) make a picture with the Knights of Columbus.  It was an extraordinary moment to see them line the aisle for the little ones to process through, and then to watch them, two by two, bow to the class at the beginning of the mass. 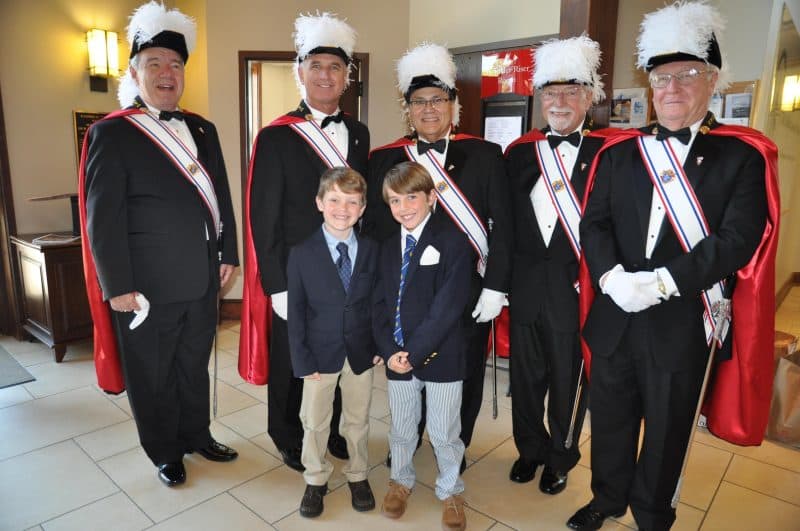 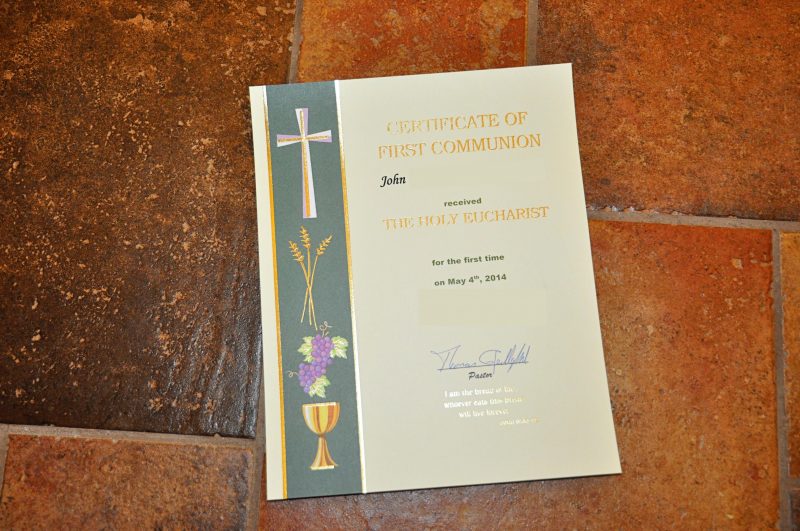 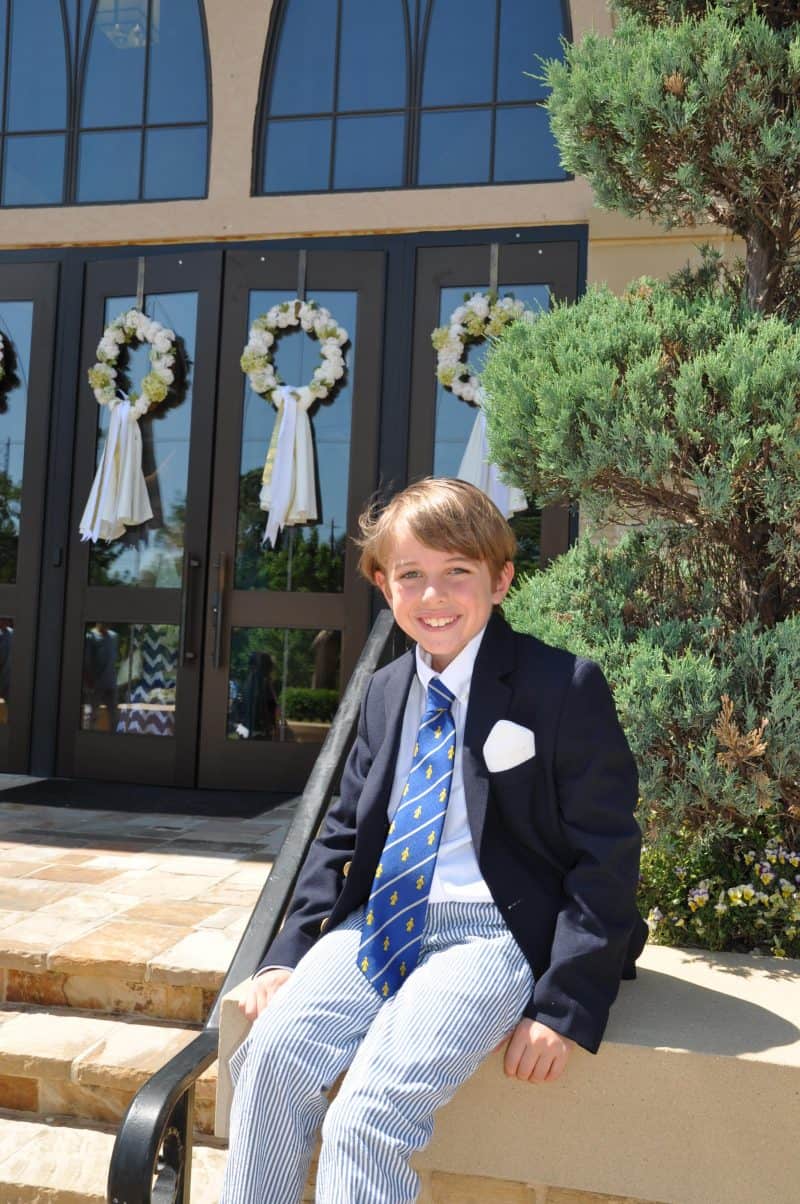 As soon as mass had ended, Sister and Mother jetted back to the house to pull out the food for the party.  We had set up as much as possible before hand.  Honey and I gave John money and my four way medal from childhood.  I wasn’t sure how he would react to the necklace, but he immediately put it on and wore it all day.  It was so very sweet to hand that down.  (Although I need to figure out something equally as special for Whit when it’s his turn.) 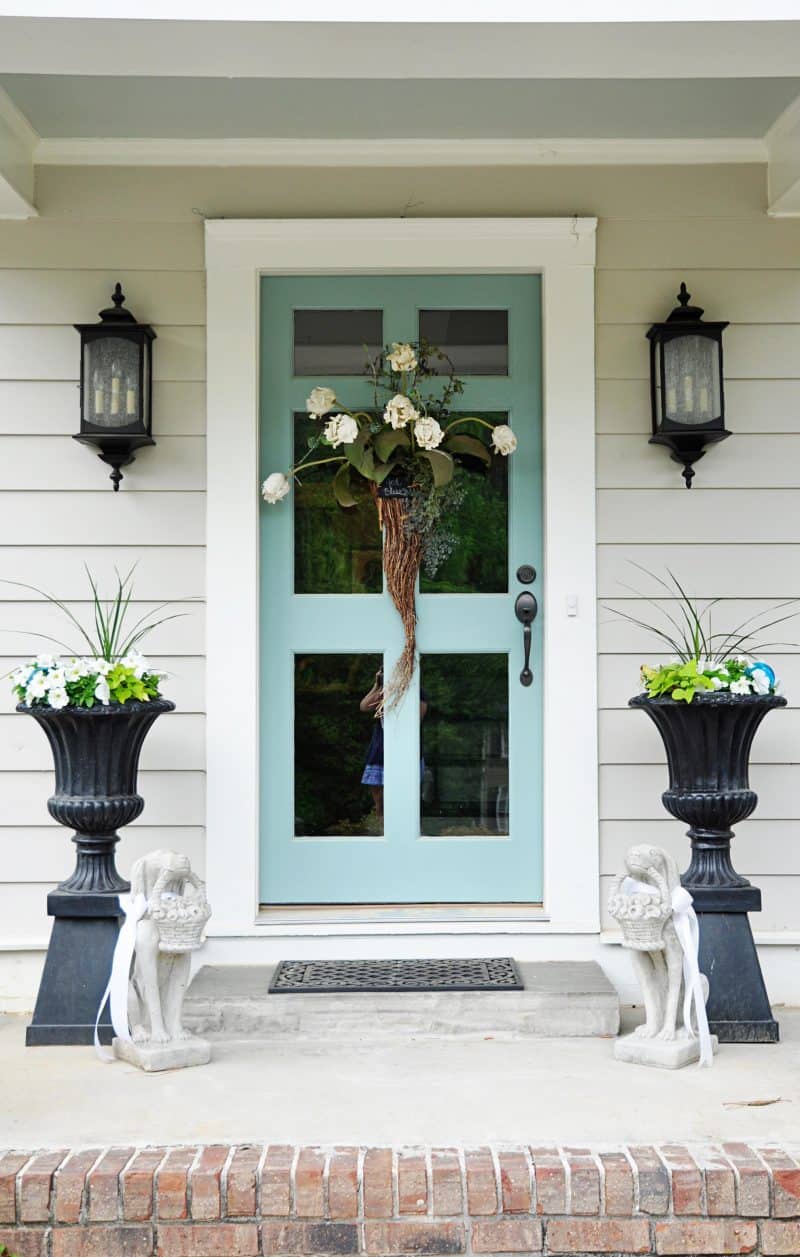 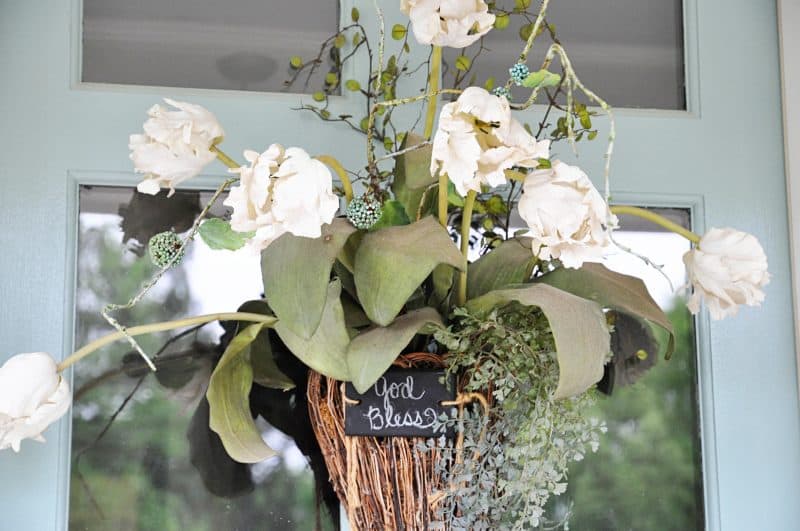 Sister made the beautiful flower arrangements, cut from a Cherokee rose and boxwoods growing in her yard.  I simply cannot believe that she has one in her yard!!  I mean, until today I had never seen one in Georgia.  (And now I really, really want one!) 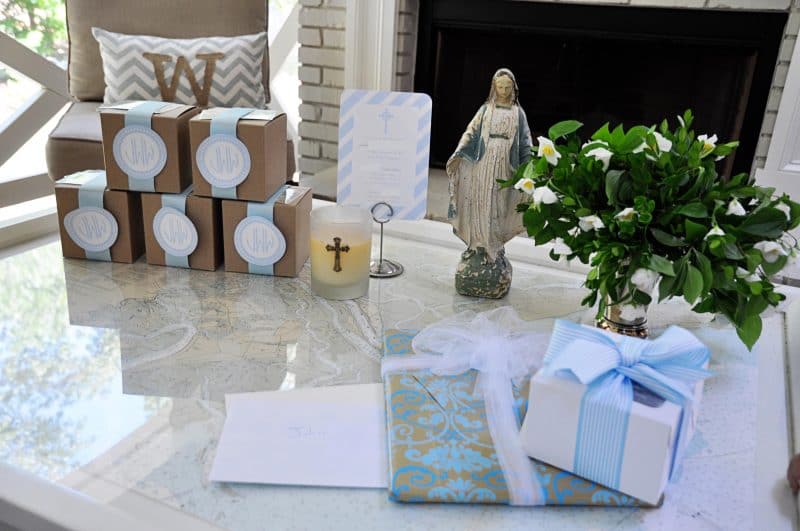 With the mass and party falling just between meal times, we served a variety of chicken salads, pimento cheese, Ina’s cheddar jalapeno crackers and fruit. 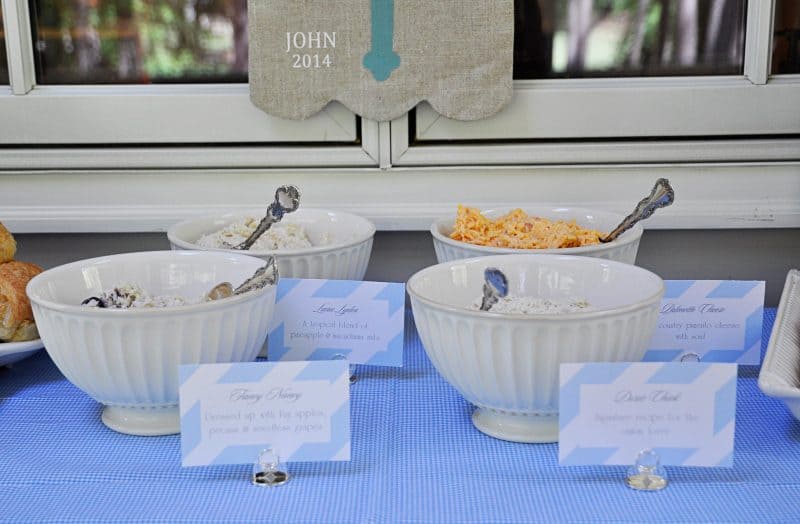 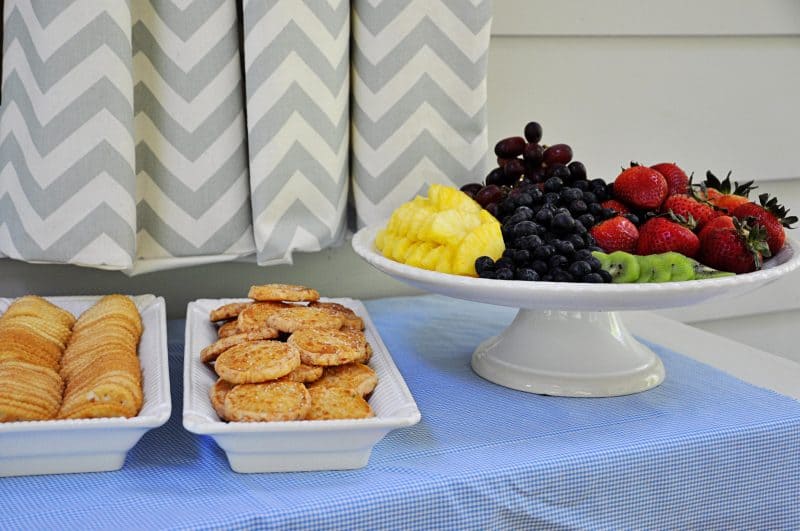 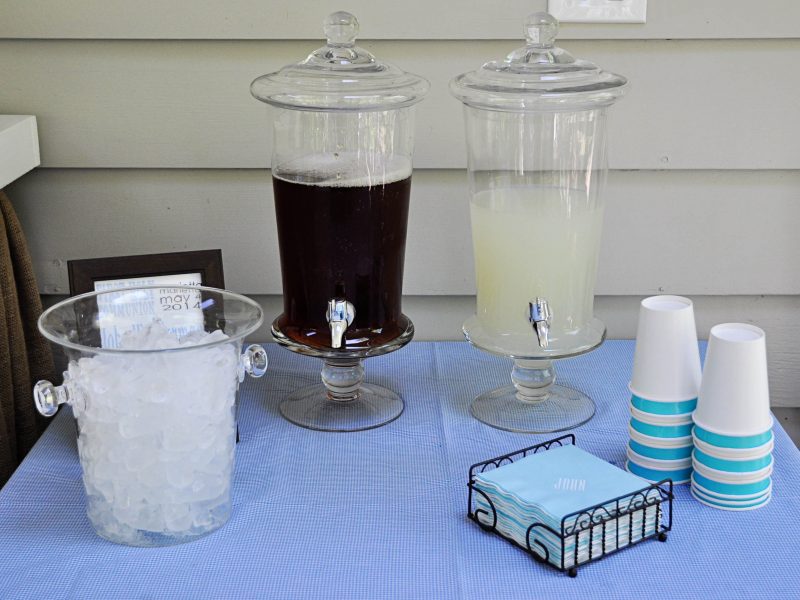 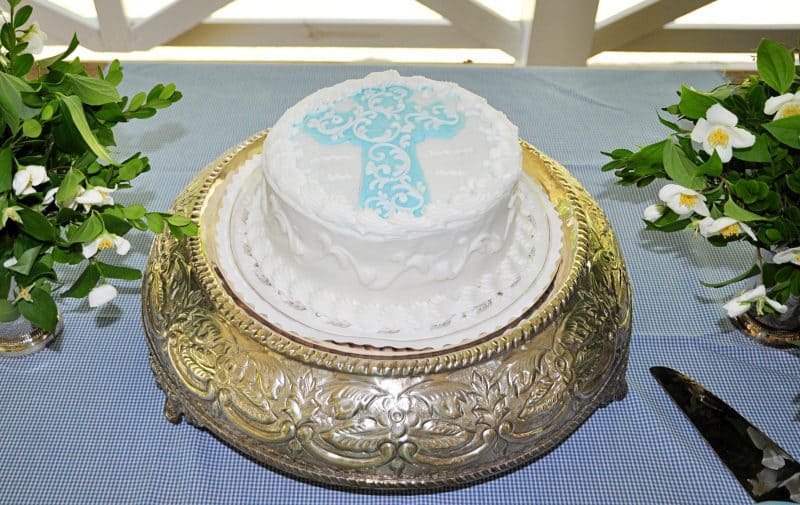 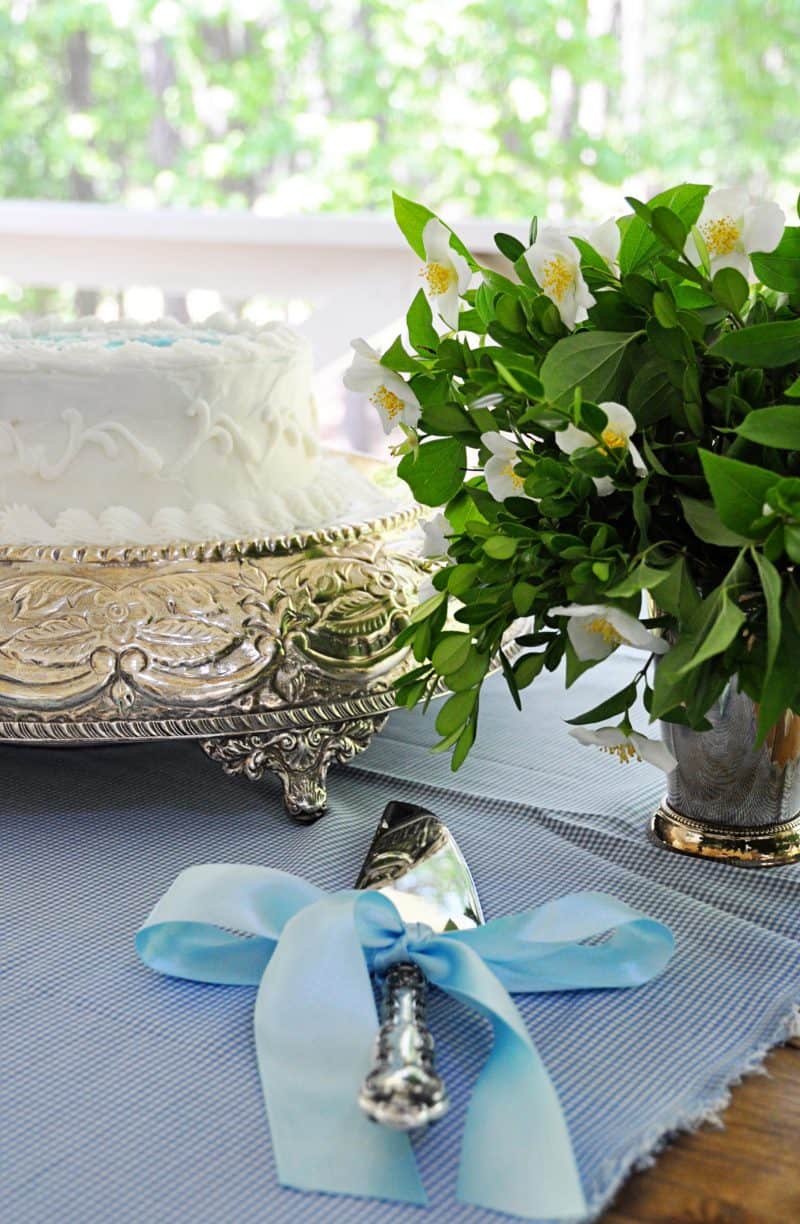 For favors, we sent each family home with a box of our very favorite petit fours and a couple of the prayer cards I made to commemorate the day. 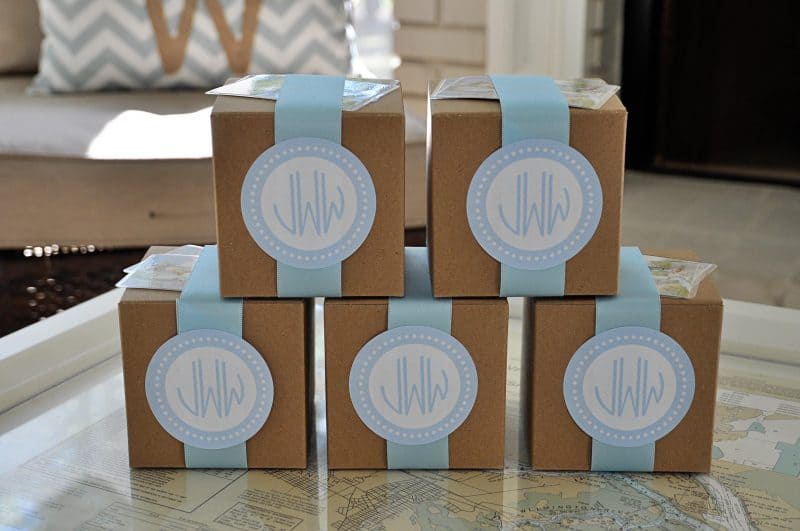 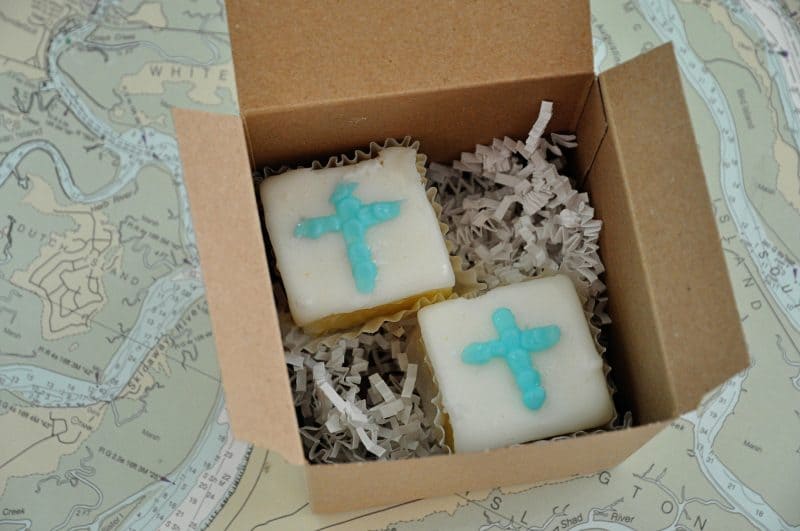 And after everyone had gone home, we recorded the event in our family Bible. 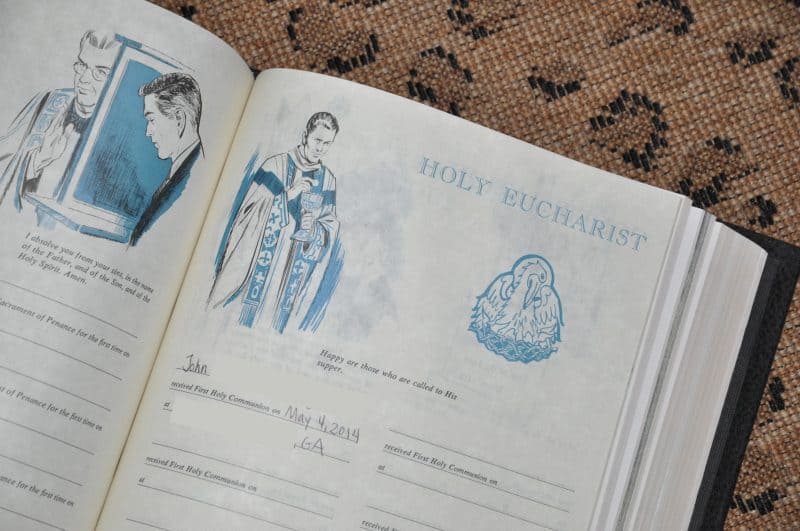 God bless you, son.  My God be near you as you kneel down to pray, and all through your future as you follow in his way.

By dixiedelights | Filed under celebrate | Tags: being Catholic, family, parties