Today was a bit more laid back than our previous two days, which was a welcome change.  We thought about starting our day at the Supreme Court, but decided to sleep in and have a leisurely breakfast instead.  We were tired!

Our first scheduled activity was a tour of the U.S. Capitol! 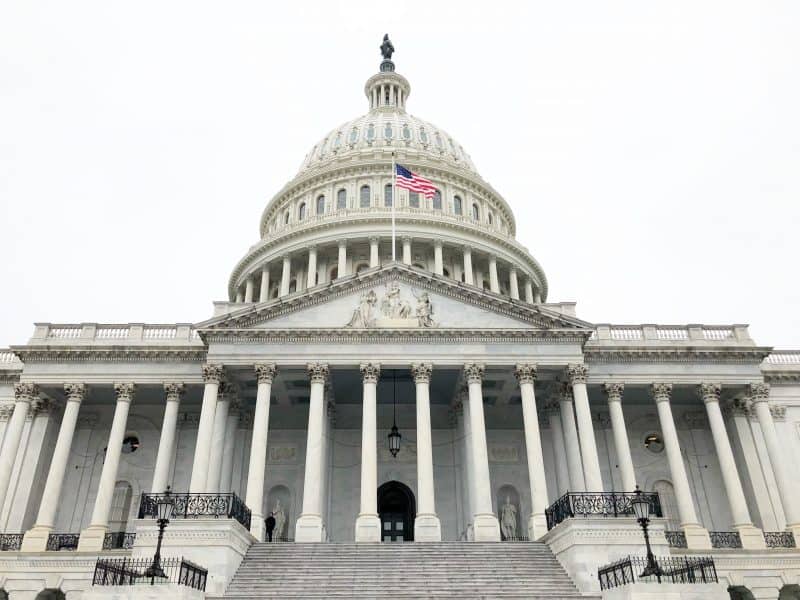 Our tour started with a wait in line that serendipitously had me chatting with a young man who turned out to be a Capitol intern from Virginia.  He was going to do his very first tour for his district the next day and was doing a dry run.  One thing led to another and he leaned over to me after the “Out of Many, One” film (which is excellent, by the way) and offered to be our guide for the morning!  We started in The Crypt where the star in the center of the floor denotes the point from which the streets in Washington are laid out and numbered.   We also learned that this rooms is called the Crypt because Congress intended to bury George and Martha Washington here in a place of honor after their deaths.  A chamber for their remains was added to the plans for the center section here, along with plans for a statue and viewing platform of the graves.  We learned (and then learned even more at Mount Vernon) that Washington wished to be buried at his home and these plans never came to fruition but the name stuck. 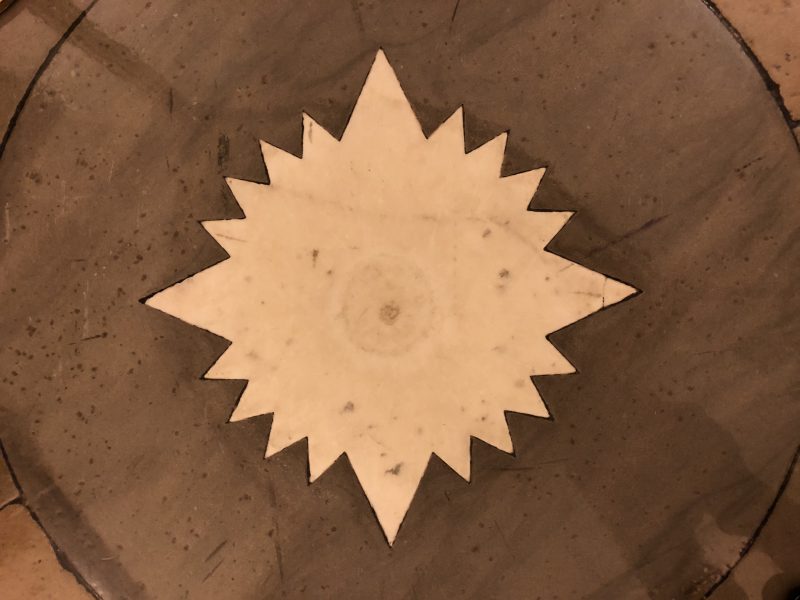 The Crypt is also home to thirteen statues from the National Statuary Hall Collection, representing the 13 original colonies.  Without thinking, we asked him to show us Georgia.  Of course, he was prepared for visitors from his home state, so we had a good laugh and went on a hunt.  After a few of these “exercises” he proclaimed himself almost able to give a Georgia tour if ever needed :-)  Funny enough, Crawford Long was the namesake of the hospital where I delivered my babies.  It is now just Emory. 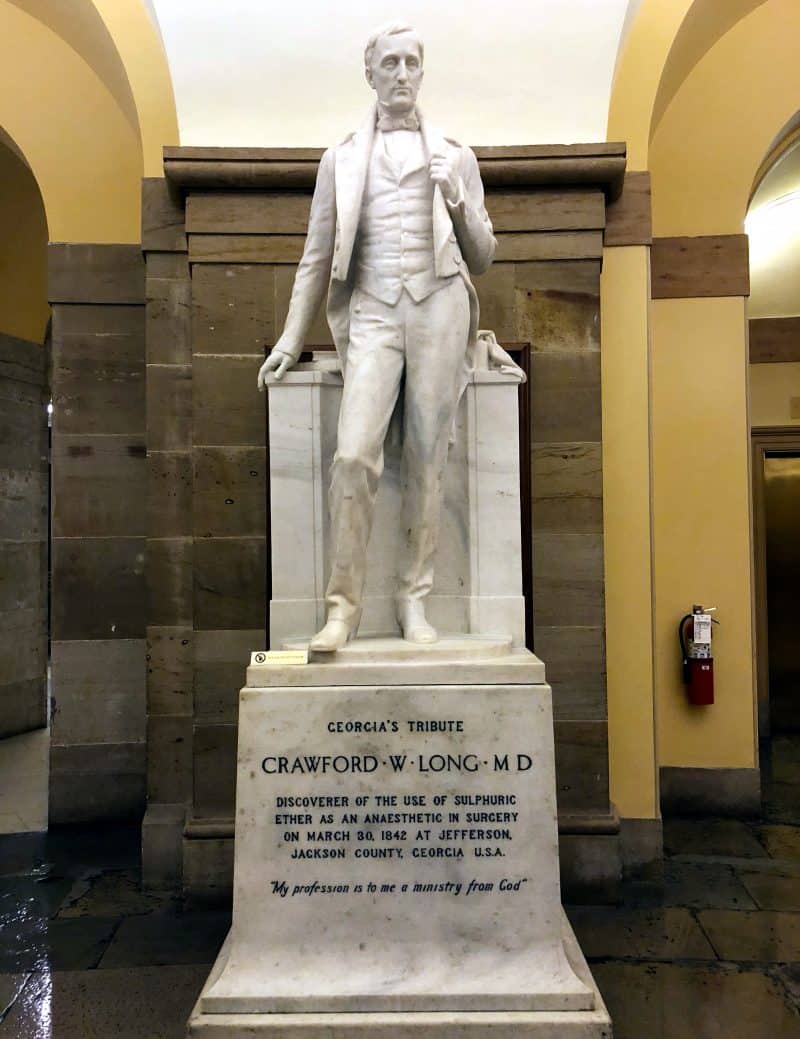 Moving along, the First Senate Chamber was initially used by the Senate on November 21, 1800 when the capitol was moved to Washington.  It continued in use until 1810, and is where Jefferson took his presidential oath of office and gave his first inaugural address. 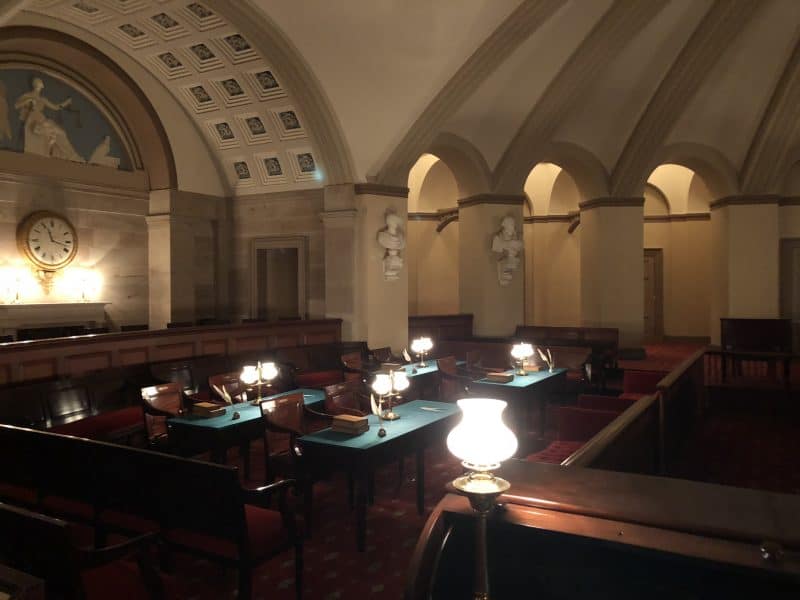 While the Senate’s first chamber was described as “magnificent” and “grand,” senators found it dark and cramped. They moved to the Old Senate Chamber, from 1810 – 1859.  This was the place that Webster, Clay and Calhoun debated the issues of slavery, territorial expansion and economic policy that divided our young country. 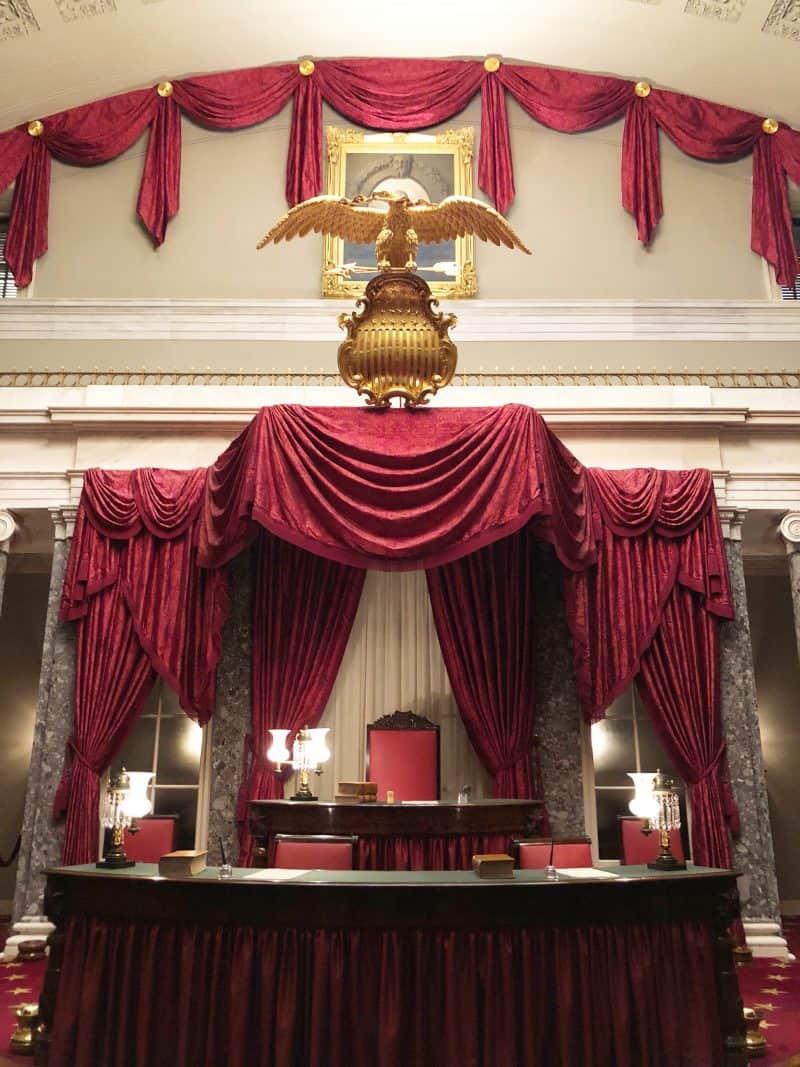 … and, of course, the Rotunda!  It was hard to believe we were inside this American icon!  We learned that the frescoed frieze, traces America’s history from the landing of Columbus to the birth of aviation, was painted to give the illusion of a carved stone relief. It was just beautiful. 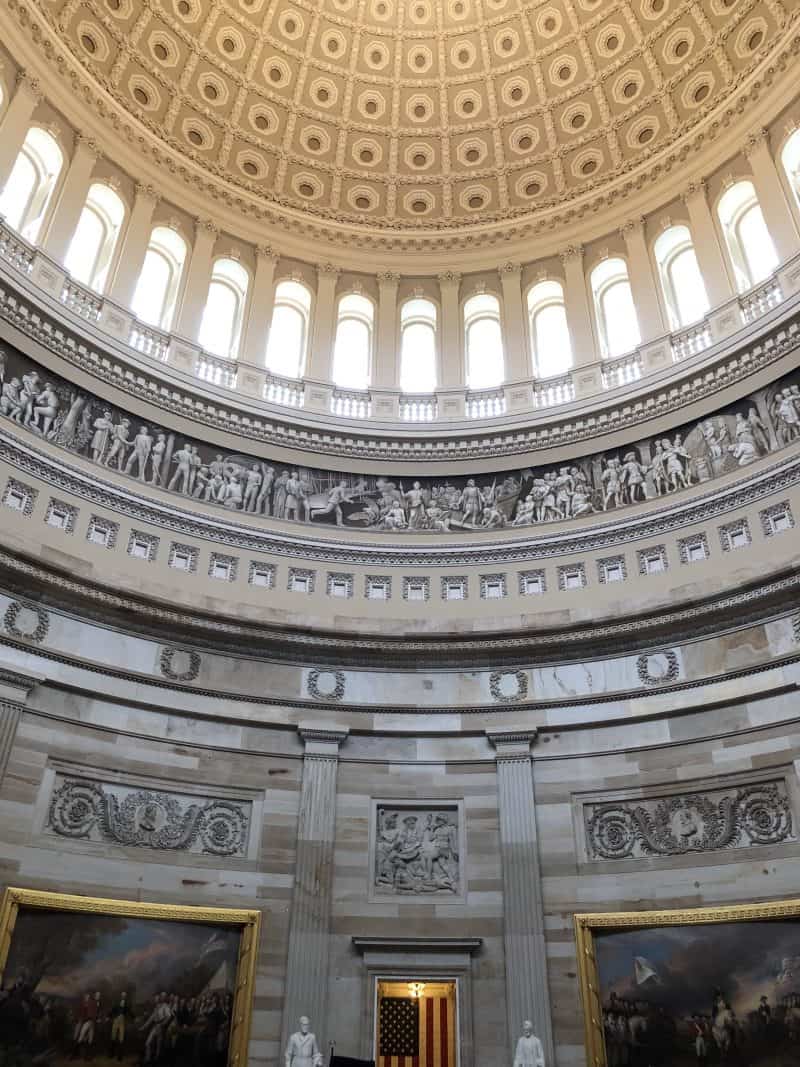 In the center, The Apotheosis of Washington depicts George Washington sitting amongst the heavens.  Figures from mythology represent Liberty (Goddess of Liberty) and Victory (Goddess Victoria).  Then, there are thirteen maidens, each with a star above her head, representing the original 13 colonies that complete the circle. Several of the maidens have their backs turned to Washington, said to represent the colonies that had seceded from the Union at the time of painting. Upside down above Washington is the banner E Pluribus Unum meaning “out of many, one”.  Surrounding this are scenes representing war, science, marine, commerce, mechanics and agriculture. 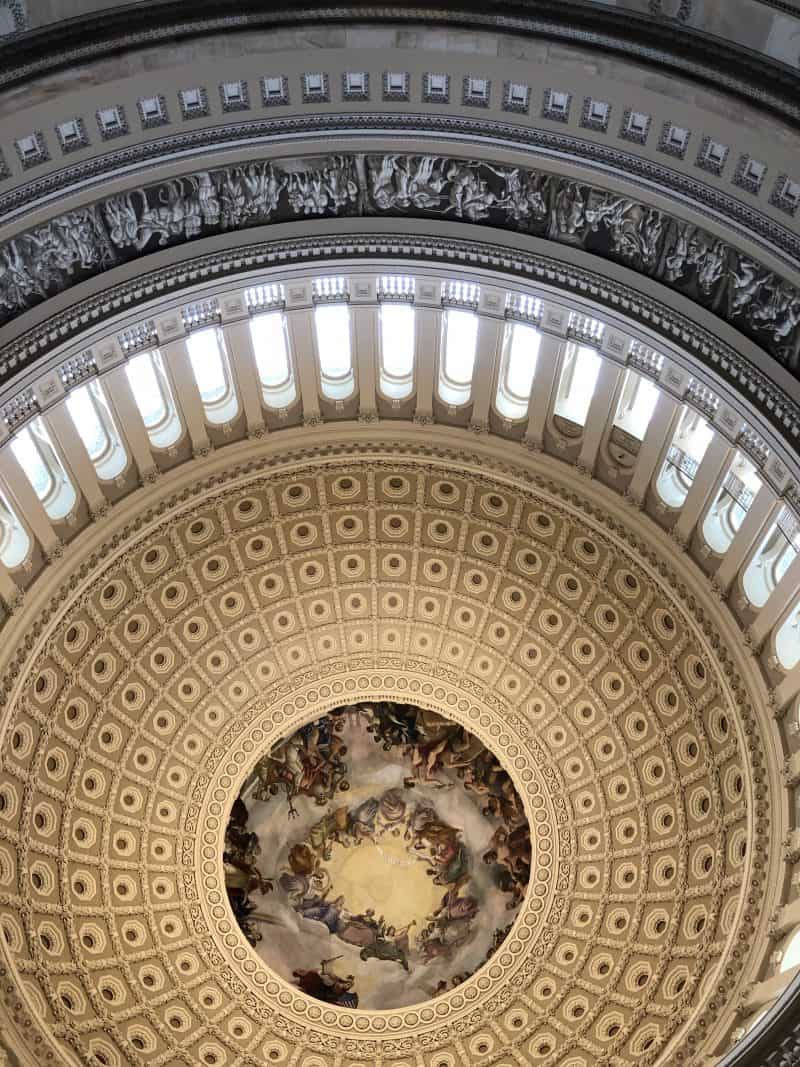 We learned from Drew that Reagan’s statue has a narrow band of pieces from the Berlin Wall around the base. 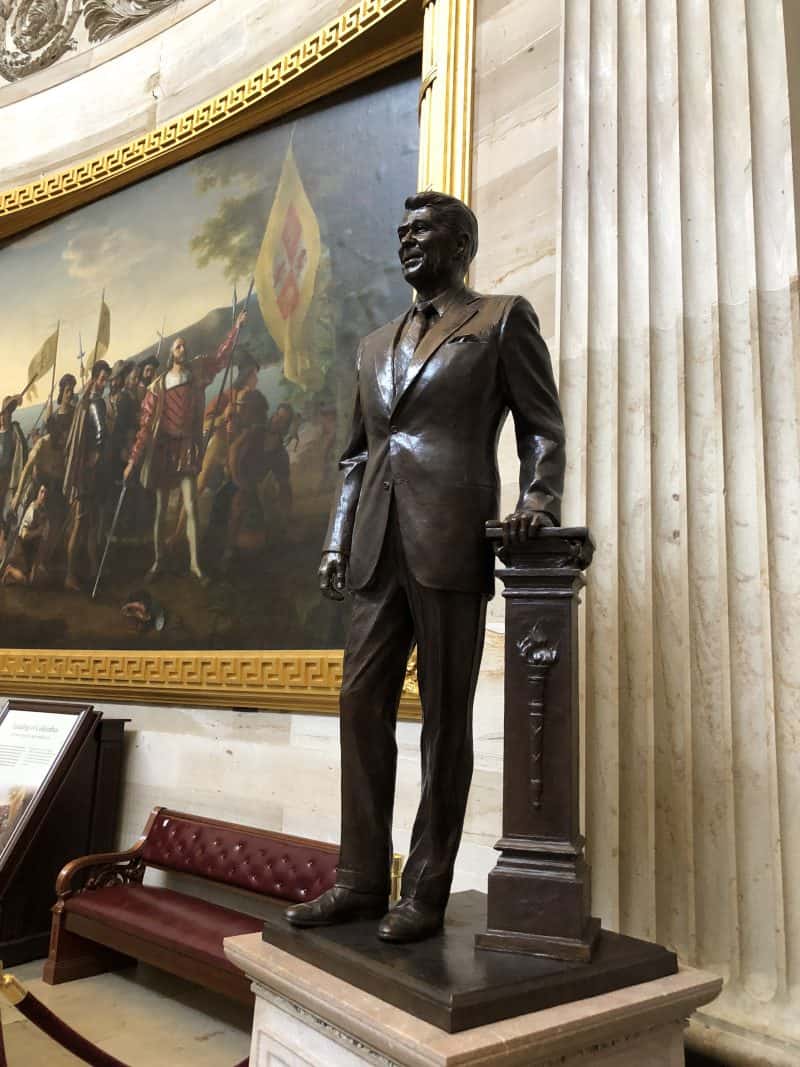 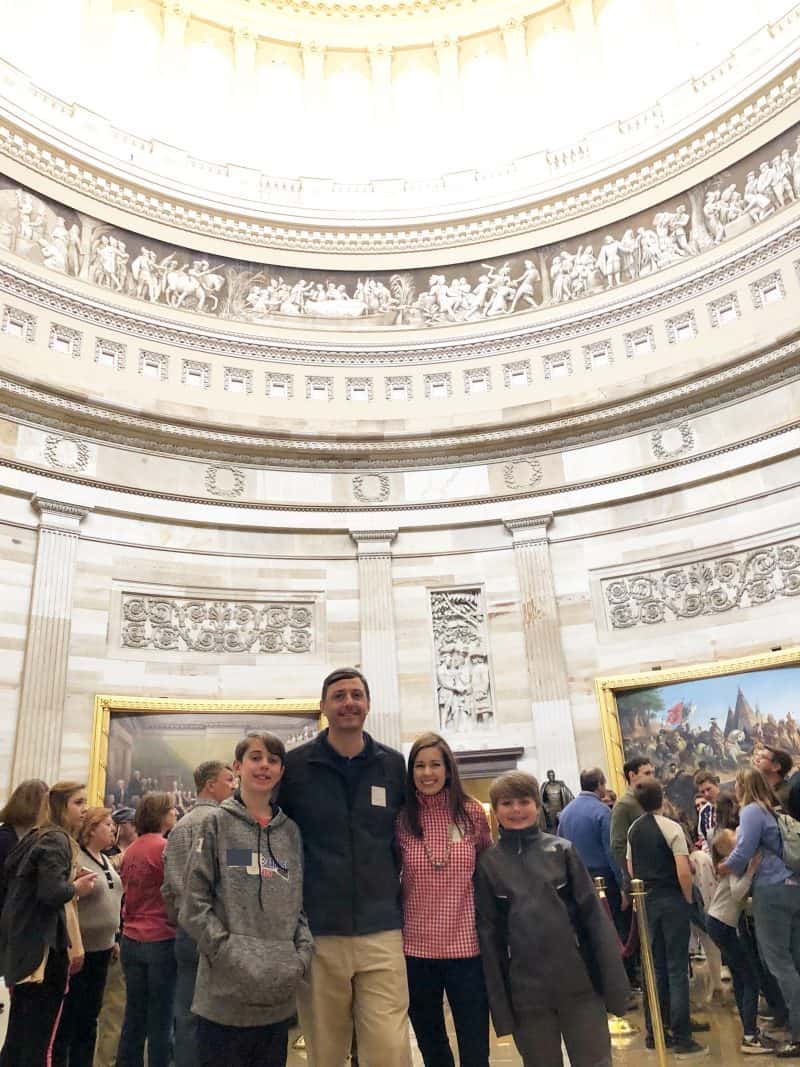 Like on the other places we toured, having a guide to tell us the stories, legends, secrets and little tidbits of the Capitol were invaluable.  Here in the National Sanctuary Hall, he even told us about a secret spot where you can hear conversations straight across the room and let us try it out. 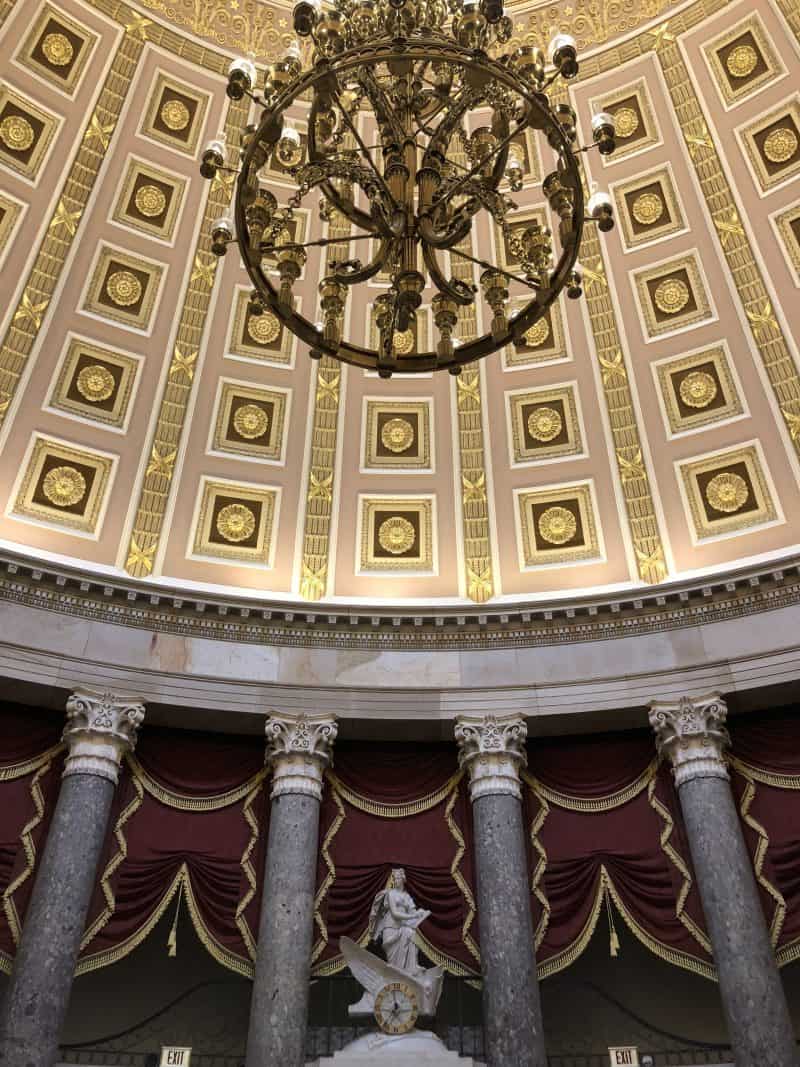 Before parting ways, Drew asked for a picture with his very first tour family.  He was such a smart, funny, kind guy and he made the day of one little family from Georgia!  I am still trying to find the right people to thank for his help – if anyone has ideas I’d love to know :-) 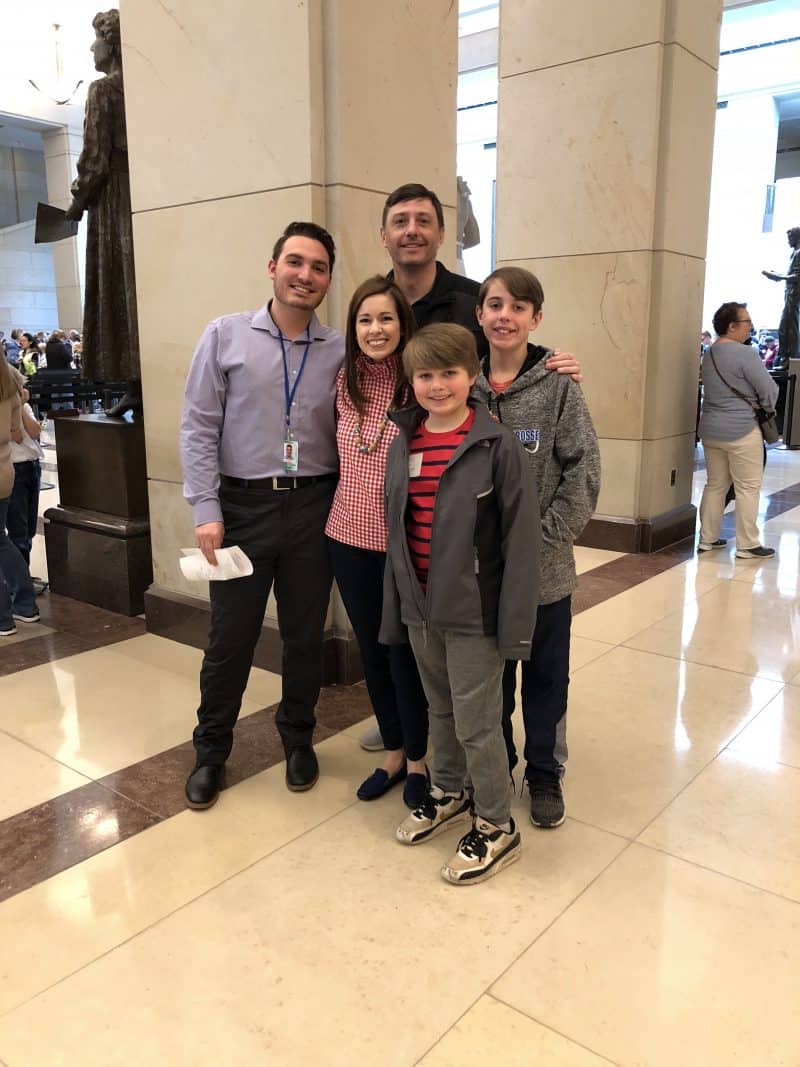 After the tour we took some time to explore the gorgeous and expansive Capitol grounds.  It was a dreary day, but we were kind of on cloud 9. 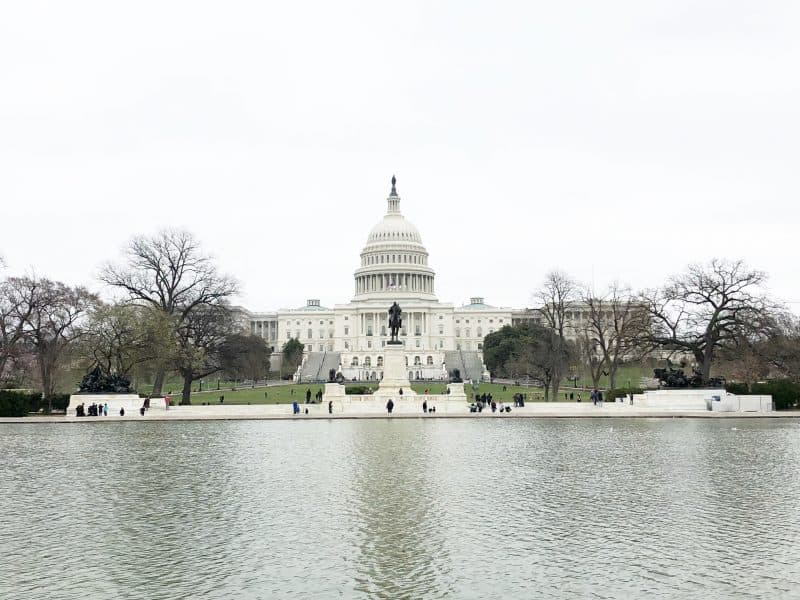 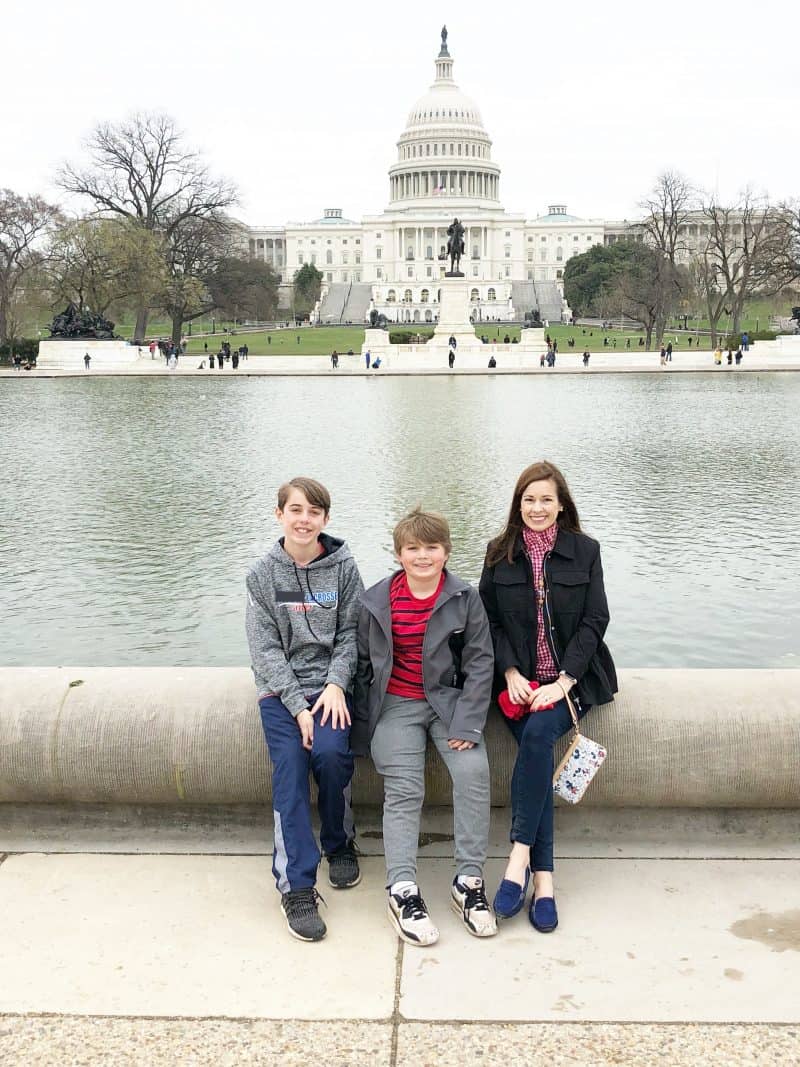 We ended up with a drizzly afternoon and were slated to head over to explore Georgetown.  We really had no plan and were hoping to catch their lacrosse team in action, but it was too cold, windy and rainy to really want to do that.  Instead, I looked to Instagram for ideas and we ended up in a neat, very “college-ish” place called The Tombs for lunch. 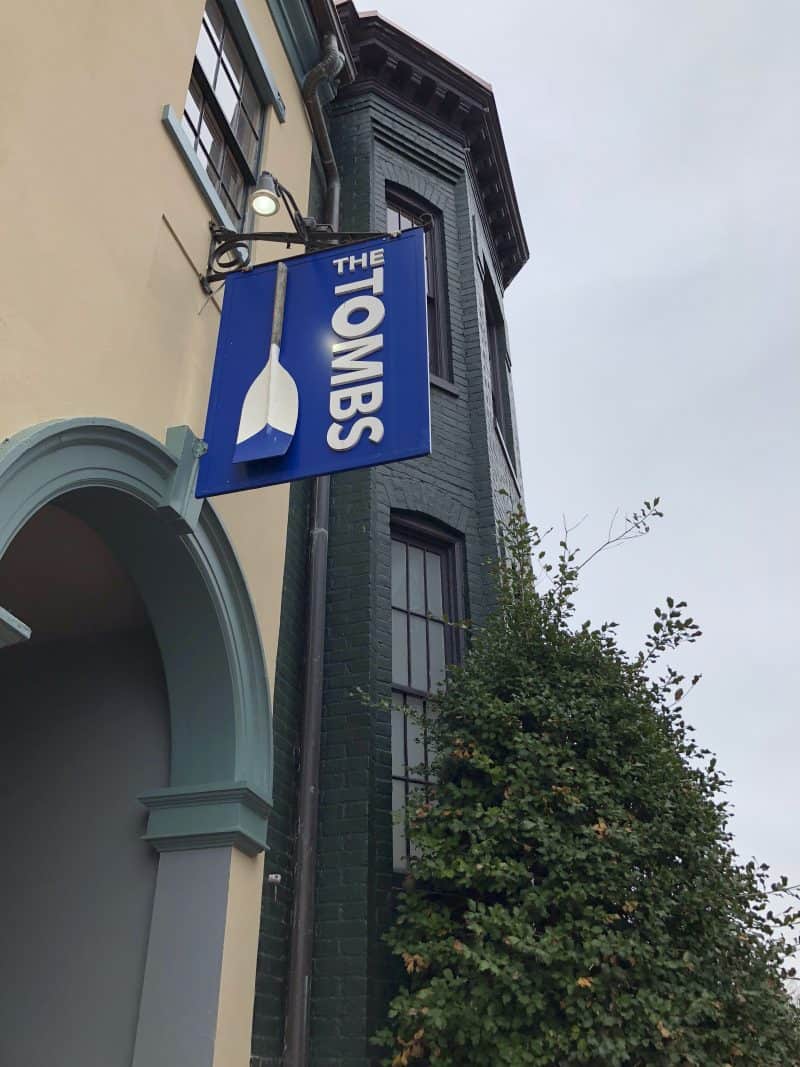 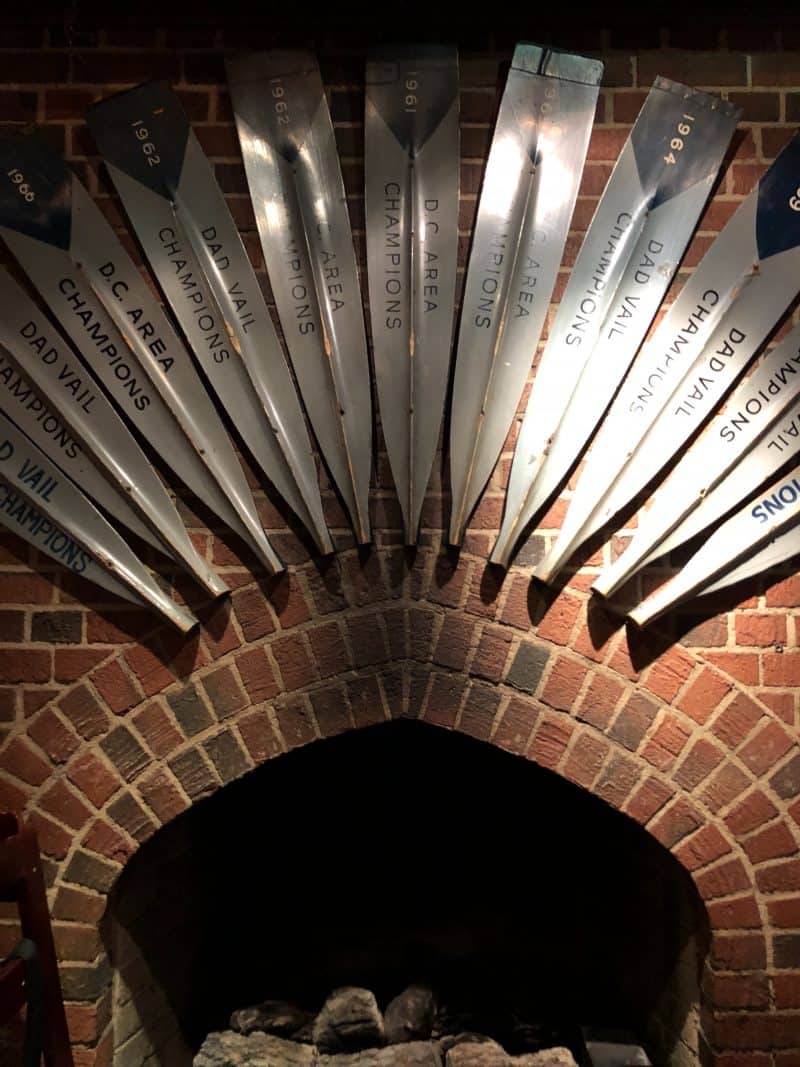 At the recommendation of the gal who pointed us to The Tombs, I got the salad served on a pizza crust.  It was strangely delicious and I want to make it at home!

After lunch we stumbled upon The Exorcist steps.  Lucky find!  There were a few students running up and down them and one didn’t hesitate to ask if we wanted our picture made. 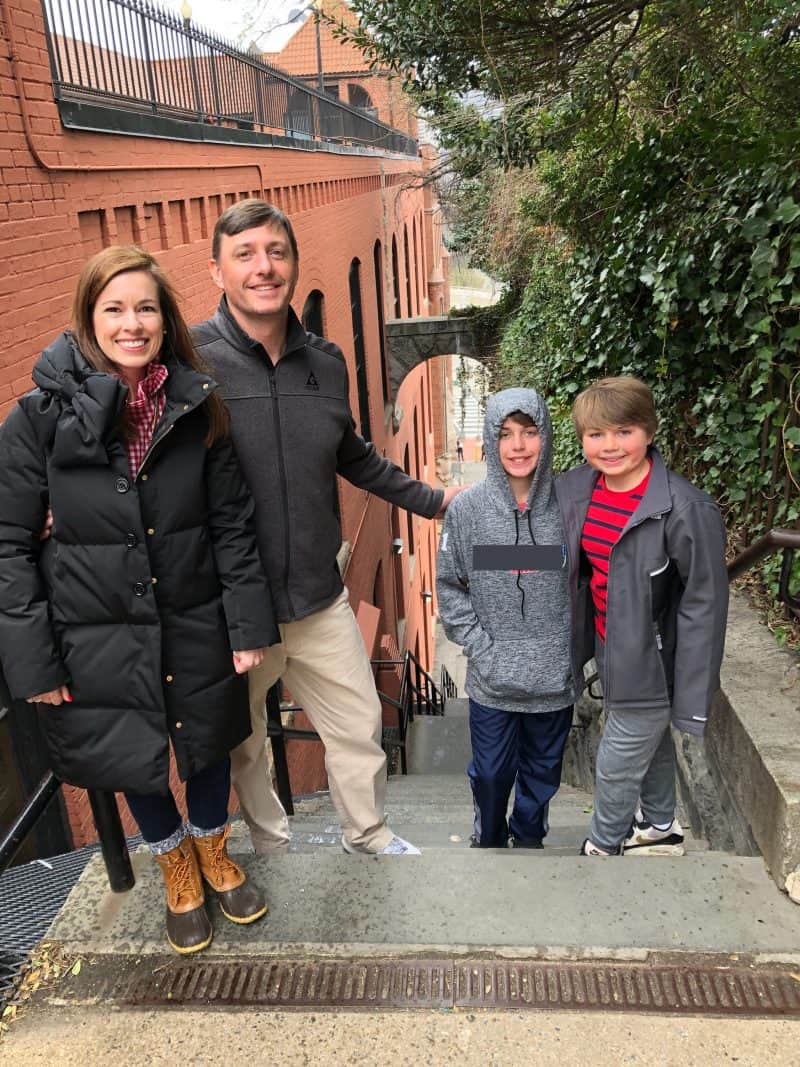 After lunch we headed to Pinstripes for a little bocce competition.  It was JUST what we needed after a few days of heavy museum and attraction touring! 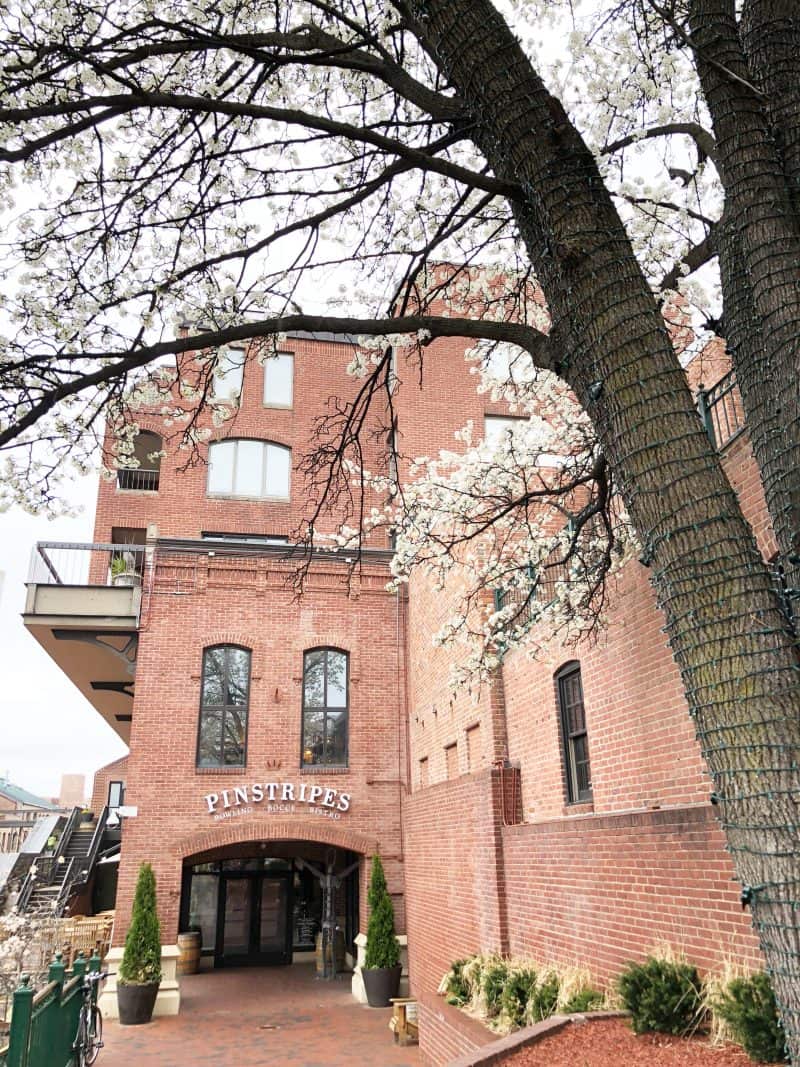 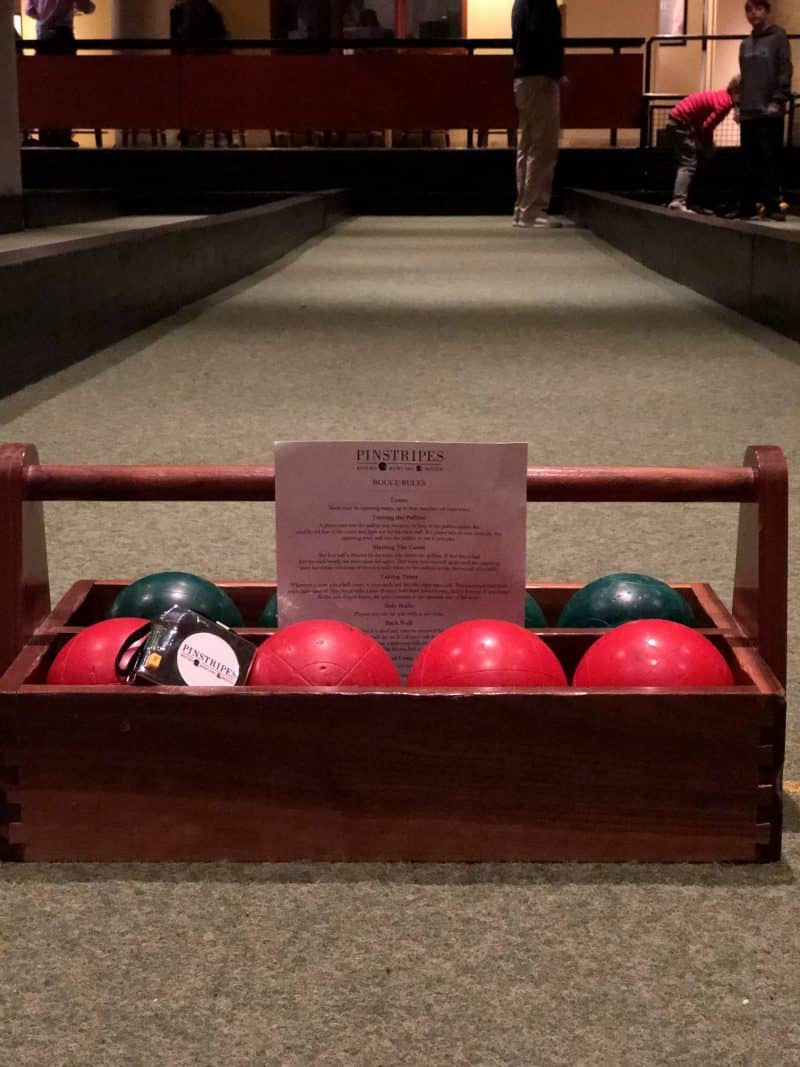 Right across the street from Pinstripes I spied the Lilly store, shining bright and pink like a beacon of sunshine in the rain!  I had to check out their dressing rooms, and this one didn’t disappoint.  I really wish they made these fabulous city-themed dressing rooms into prints! 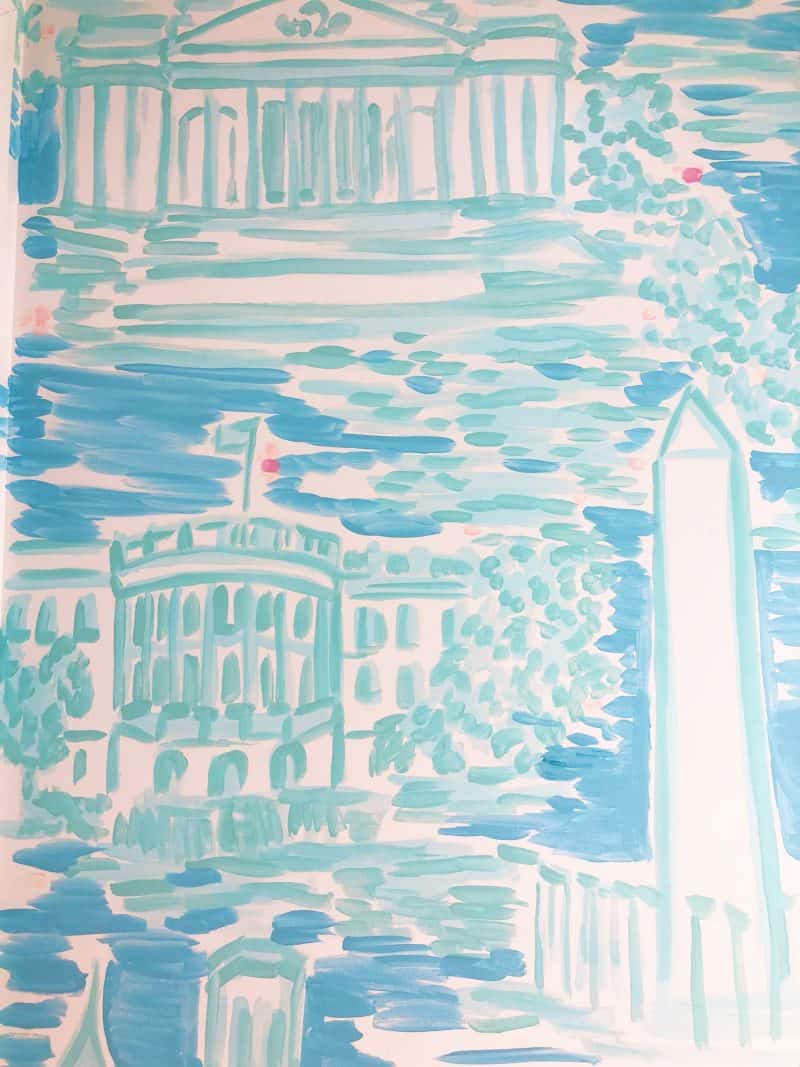 Our final stop in Georgetown was Baked & Wired for cupcakes and cappuccinos!!  The line moves quickly and the place is small, but we did find a cozy table to enjoy our afternoon snack.  Y’all, in writing this I realize how much I love cupcakes and sweets and how I really only indulge in them on vacation.  :-)  I’d kind of give my left arm for a good cupcake right now.  It helps that there is no place near me that has REALLY good bakery treats. 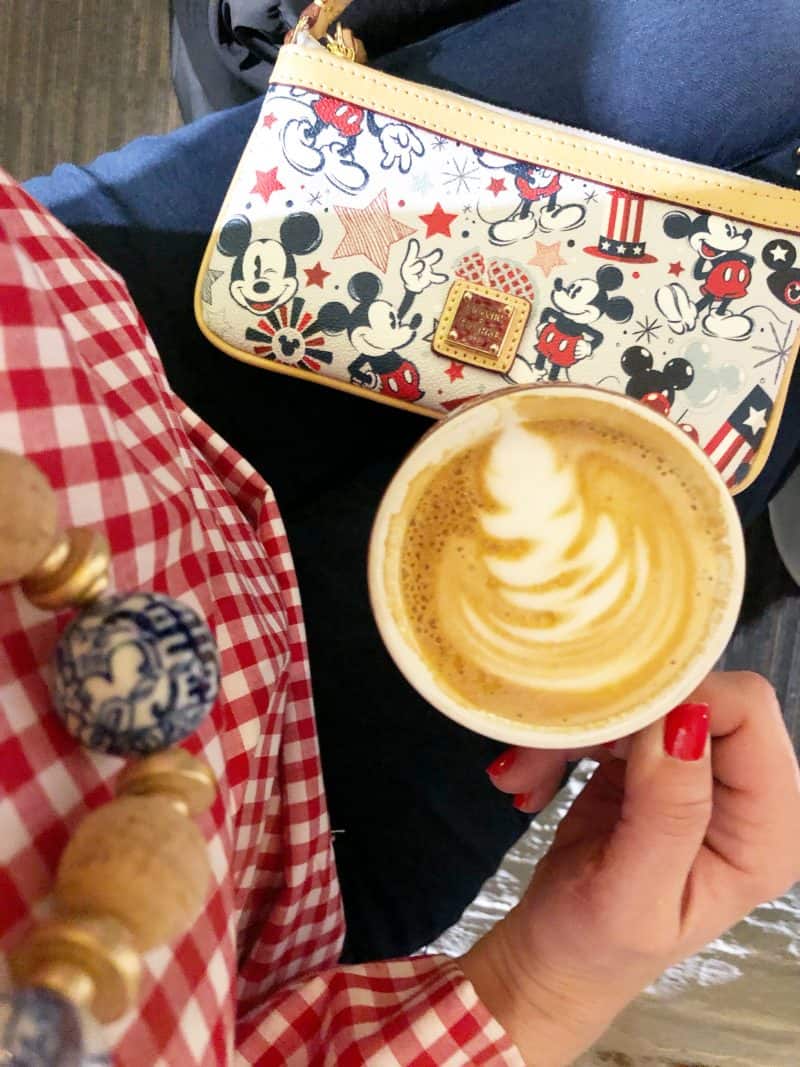 After a late afternoon nap at the hotel, we headed out on foot for dinner at Founding Farmers.  This was our favorite family meal after Ted’s Bulletin.  The food was really, really, really good and the drinks (alcoholic and non-alcoholic) were so yummy.  We didn’t love dessert here but our appetizers and entrees were all fantastic.  I highly recommend making a reservation for Founding Farmers.  They are available on Open Table and can be made 3 months in advance.  It was our experience, and I read many online reviews that stated this, that they were running about 30 minutes behind, even with a reservation.  It was worth the wait! 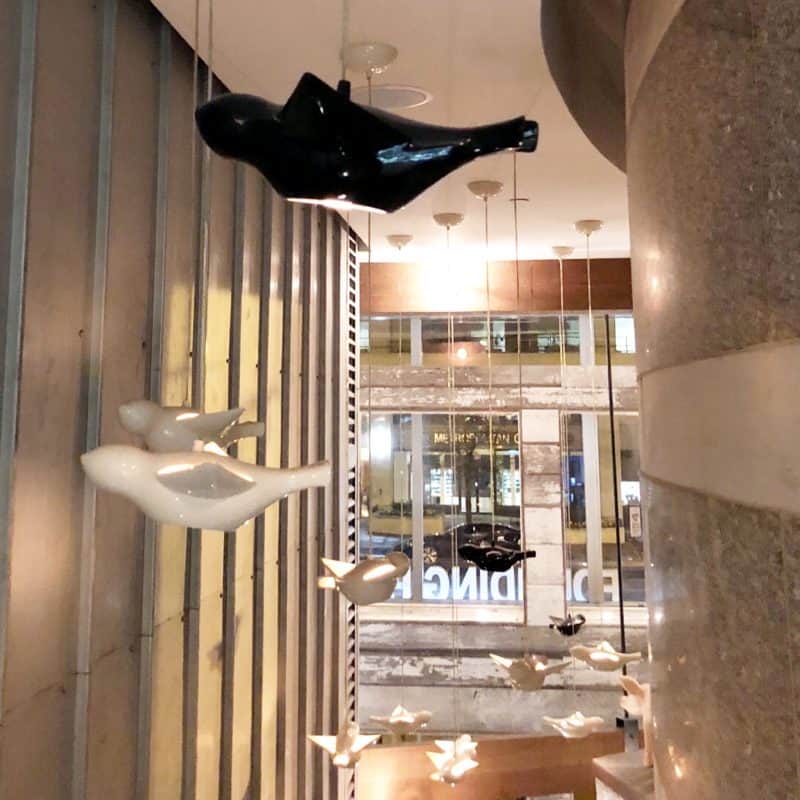 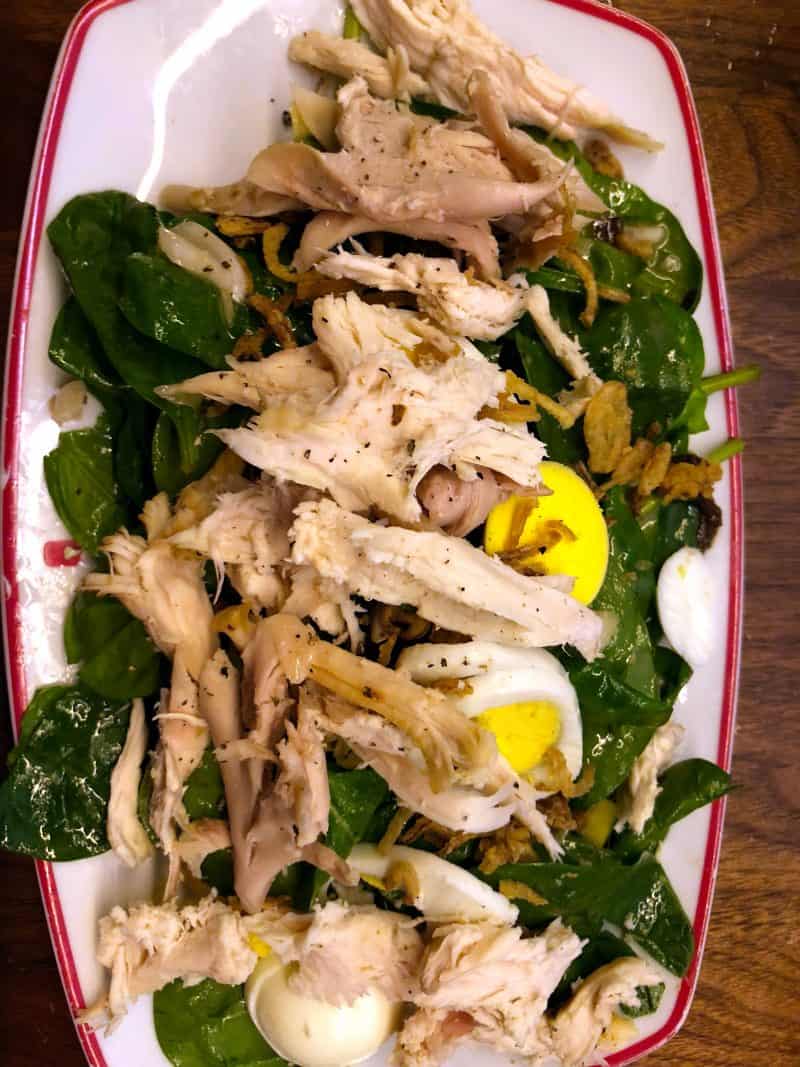 We only have one more day in D.C. before moving on!  As for the rest of our trip, I’d love for you to follow along or catch up here.