We spent our last day of our trip touring the Jamestown Colonial National Historical Park.  We originally planned to continue at Colonial Williamsburg but I am so glad that we took the day to do this instead.  We all enjoyed it (particularly the adults) and it was one of Honey’s favorite things we did.

When you arrive, be sure to see the film at the visitor center and explore the small exhibit there.  It lays a great foundation for what you will see when you walk down to the James River. 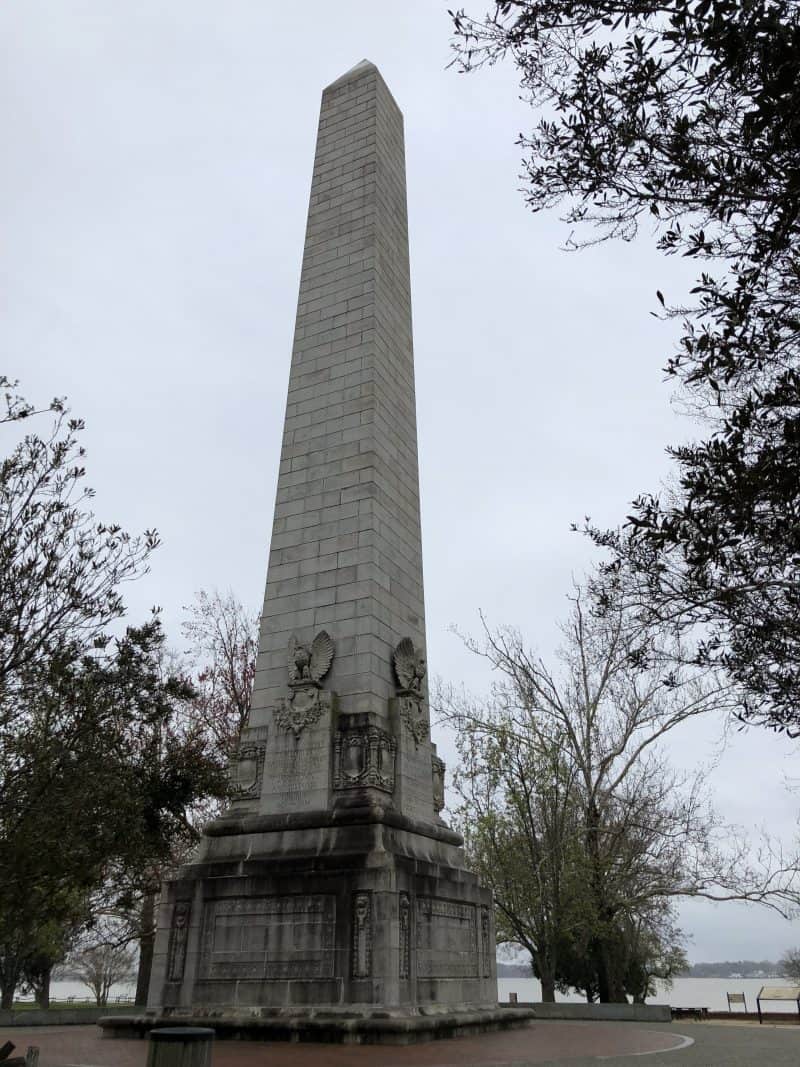 We spent most of our time in the Olde Towne section exploring the James Fort Site active from 1607 – 1624.  This was the heart of the settlement.  Right here, on May 13, 1607, Englishmen planted the roots of what became the United States of America! 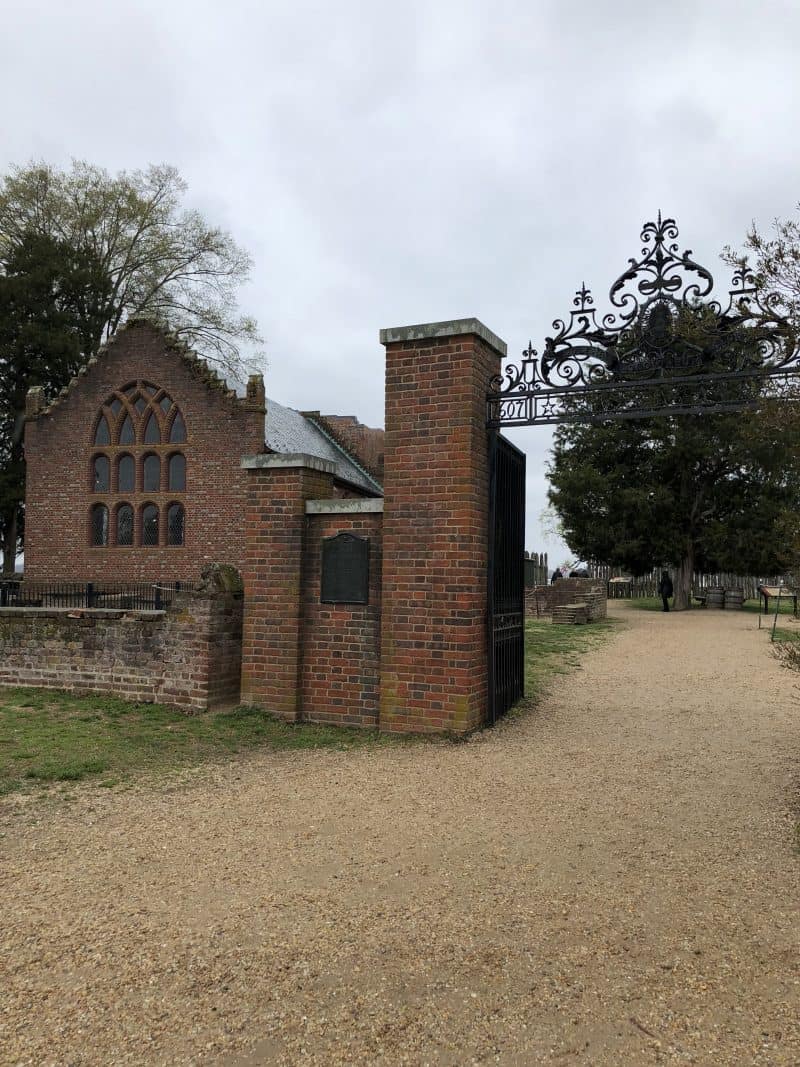 One of the most fascinating parts was going inside the the original 17th century church tower and 1907 Jamestown Memorial Church.  The tower is the last surviving above-ground structure from the days when Jamestown was the capital of Virginia. 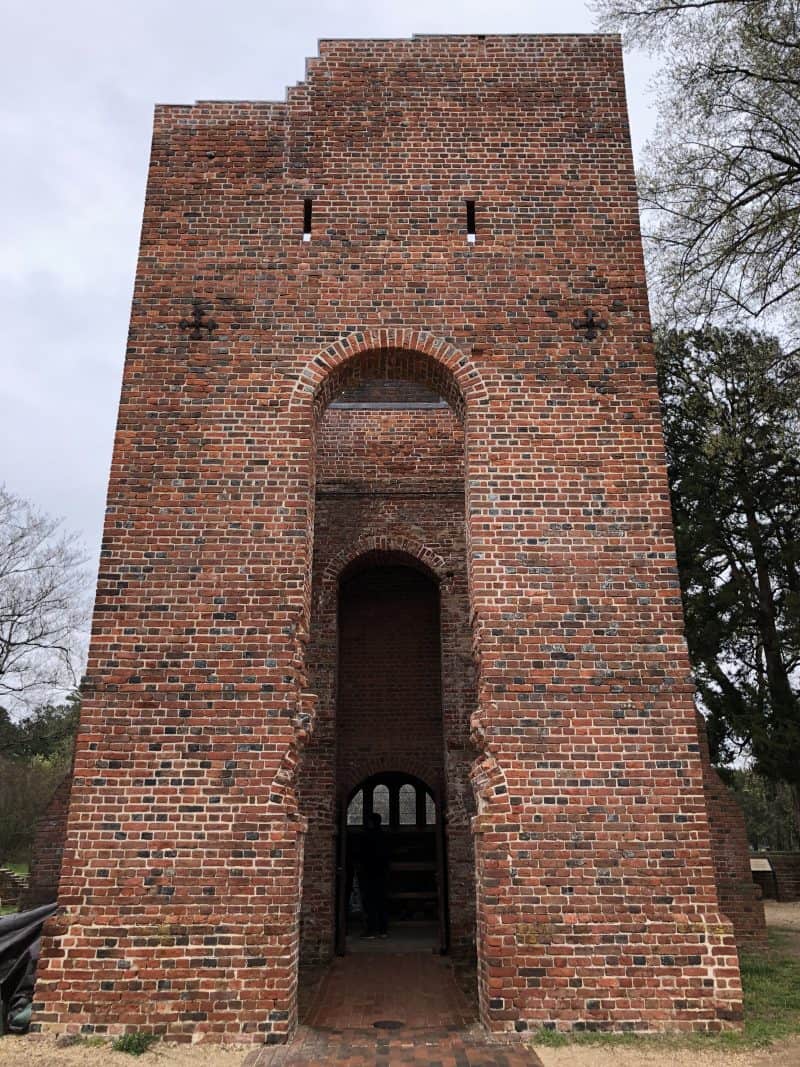 Inside we talked with a preservationist to learn about ongoing excavations.  They shared information on the foundations of the original  church, what they have uncovered and how they work. 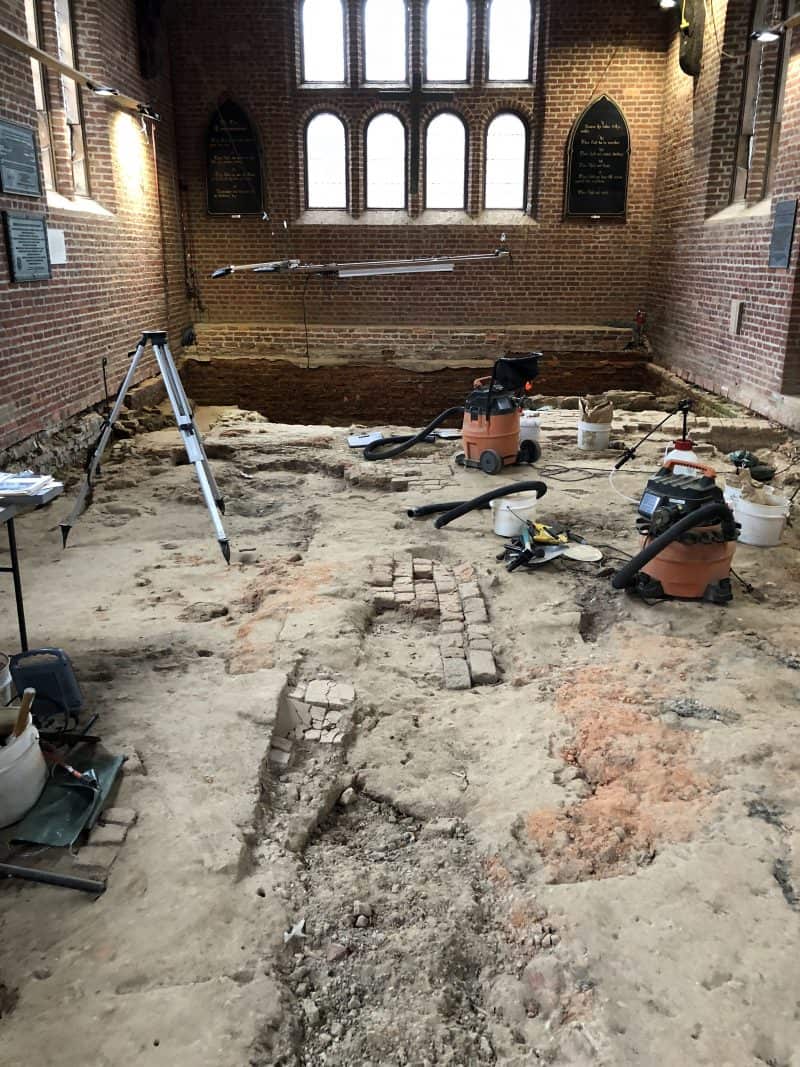 Nearby, archaeologists discovered an even earlier 1608 mud and stud church.  This is the legendary place where Pocahontas married John Rolfe.  They have also discovered four graves inside at the altar area, remains belonging to four of the first founders of English America!

The log walls you see here stand above archaeological remains of the original palisades.  The walls enclosed one acre in a triangular shaped fortification.  In the spring of 1607, the colonists were under attach from the Virginia Indians and constructed the fort enclosure hastily in a matter of days. 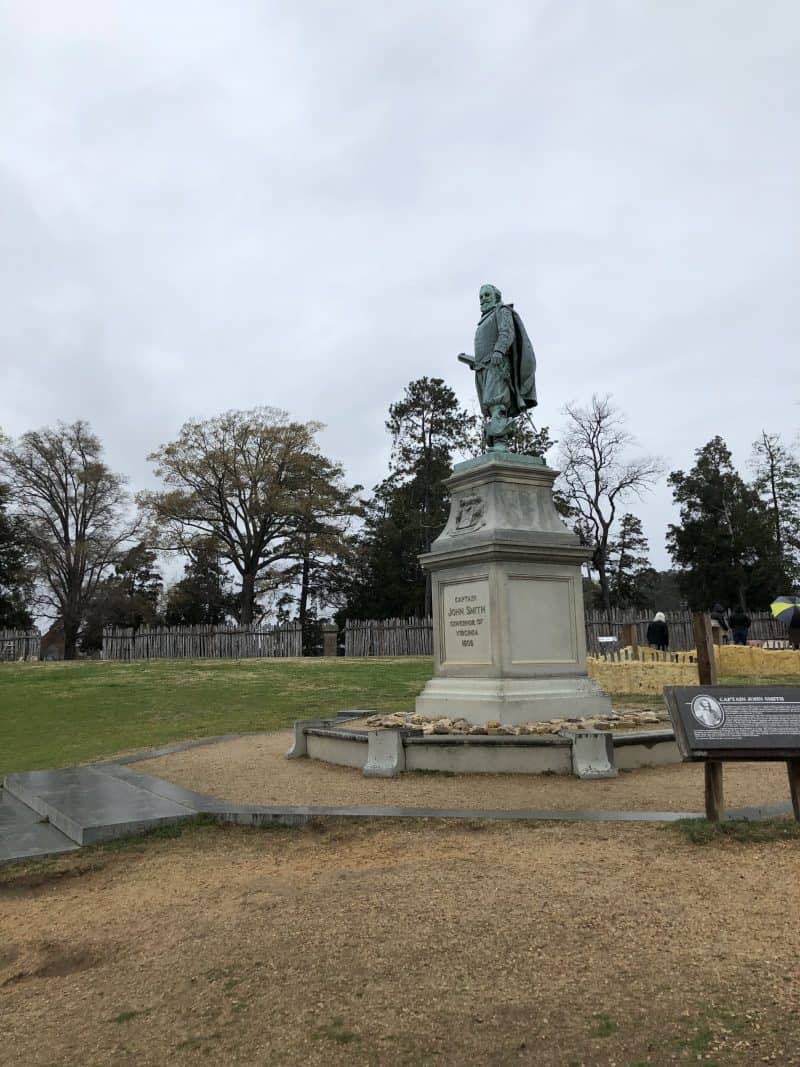 The initial structures were were made of forked trees set in the ground with mud covered walls and thatched roofs.  After 1610, timber buildings were built on stone and brick footings.  The fort included multiple row houses like this one that were likely built for the resident governor and his councillors. 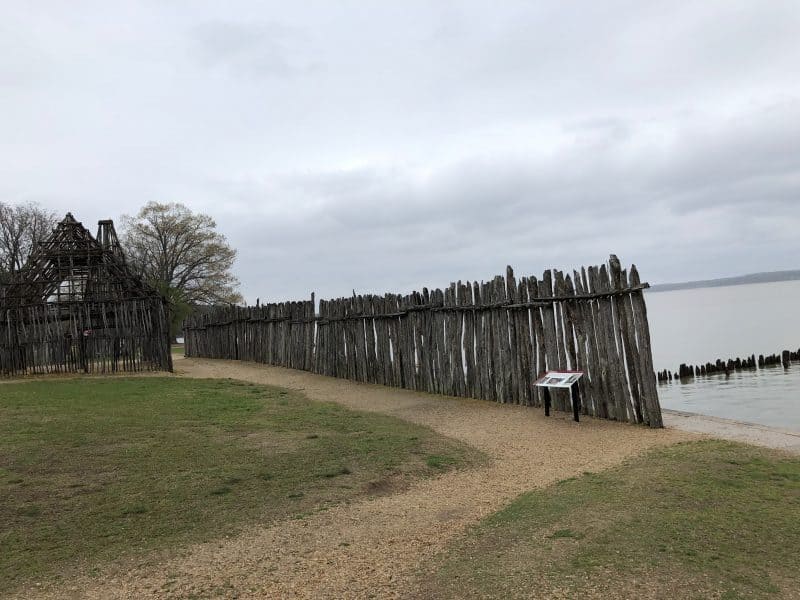 Excavations also located an unmarked burial ground containing over twenty individual and double graves.  It is believed that this cemetery holds the burials of the Englishmen who died during the disastrous summer of 1607 when only 38 of the original 104 settlers survived.  The colonists were instructed to conceal their numbers of sick and dead hence why it is believed they were buried inside of the walls.  Later, the 1611 Councillor’s Row built on top of the burial ground (noted by the stones). 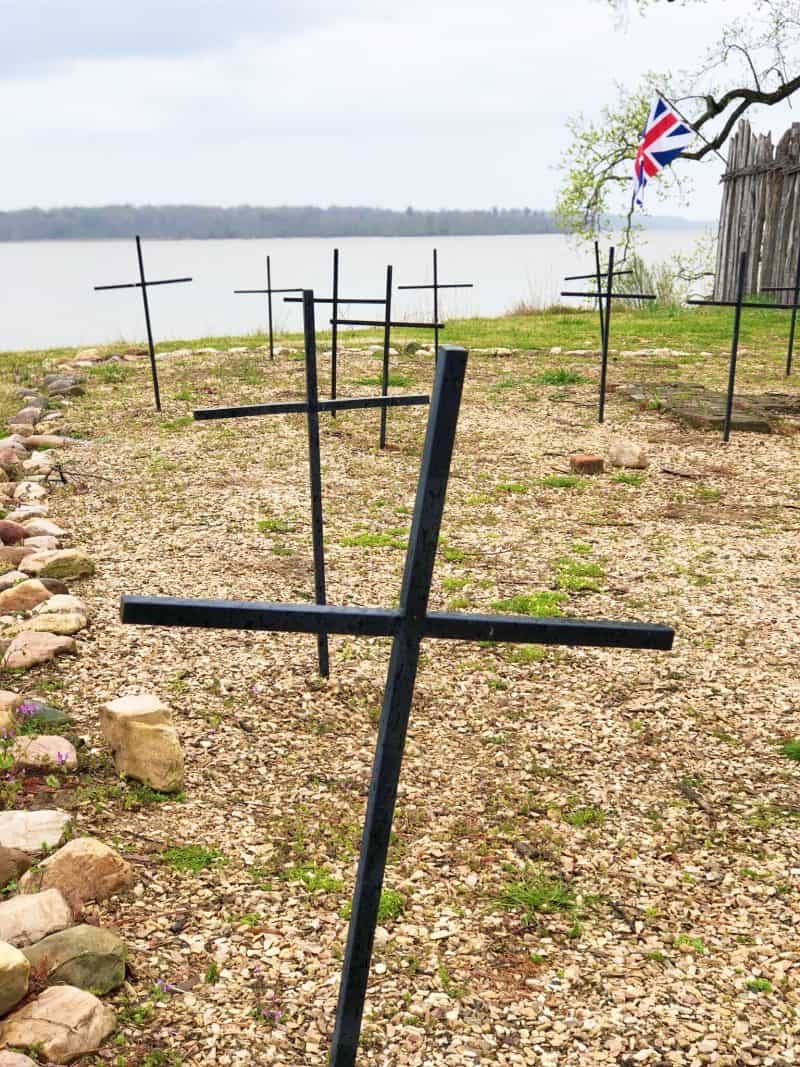 Another incredibly interesting stop is the Archaerium where you can view a staggering number of artifact discoveries.  We spent at least an hour exploring in here.  No photos were allowed.  One of the most haunting things we learned about was “the starving time” in the winter of 1609–1610 when about three-quarters of the English colonists in Virginia died of starvation or starvation-related diseases.   Colonists had to resort to cannibalism and you can see the skull of a girl bearing cut marks, as though it had been carved.   There are many more less morbid things to find as well :-)

If this at all interests you, we have been enjoying looking through articles on this site about past discoveries and current work.  We look forward to keep up with the progress! 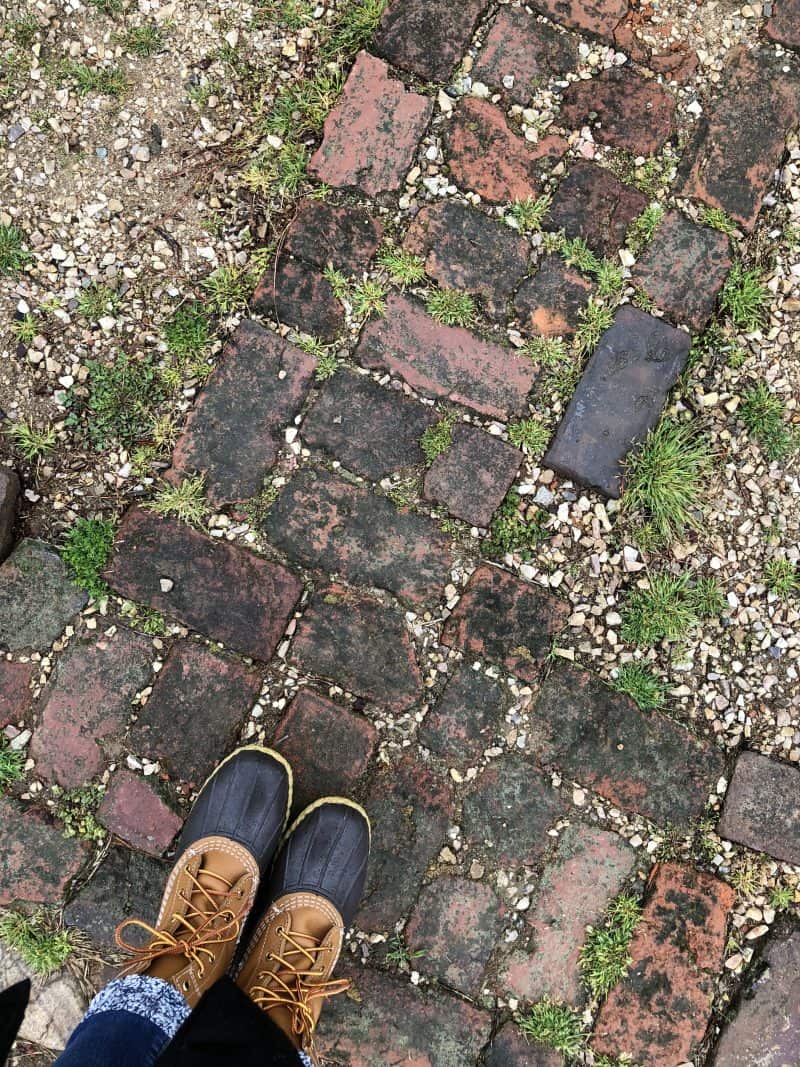 In retrospect, I probably shouldn’t have called this segment of our trip The Historic Triangle since we only visited two of the three stops.  Admission to Yorktown Battlefield was included with our ticket but we had to skip it in order to make our flights home.

As for the rest of our trip, I’d love for you to follow along or catch up here.  I have just one last post going up tomorrow.  THANK YOU for following along!

12 thoughts on “The Historic Triangle {Jamestown}”