We kicked off this adventure to our nation’s capital not traveling by car or airplane, but rather by TRAIN!!!  This is something the boys have always wanted to do, and something neither Honey or I have ever done so we thought… “why not?!”  We booked our tickets for the Amtrak Crescent Line that originates in New Orleans and hits Atlanta, Washington D.C. and New York, among many other smaller stops.  The portion from Atlanta to D.C. is about 14 hours long in an overnight ride from 8PM – 10AM. 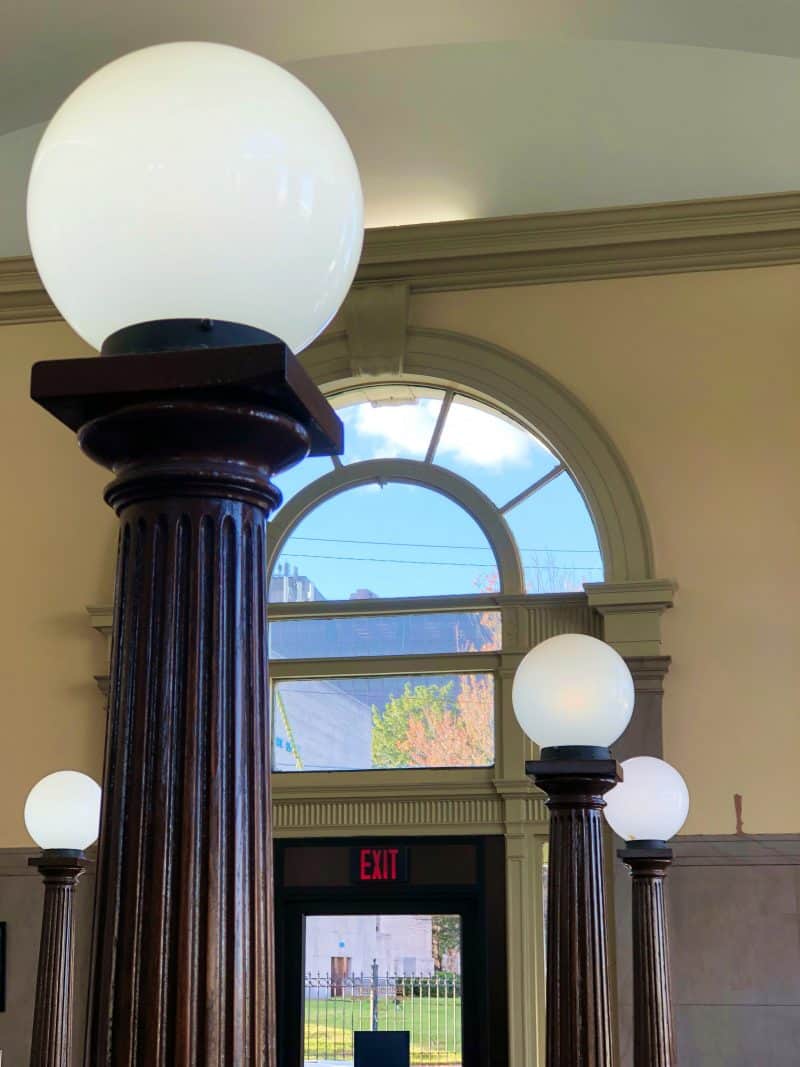 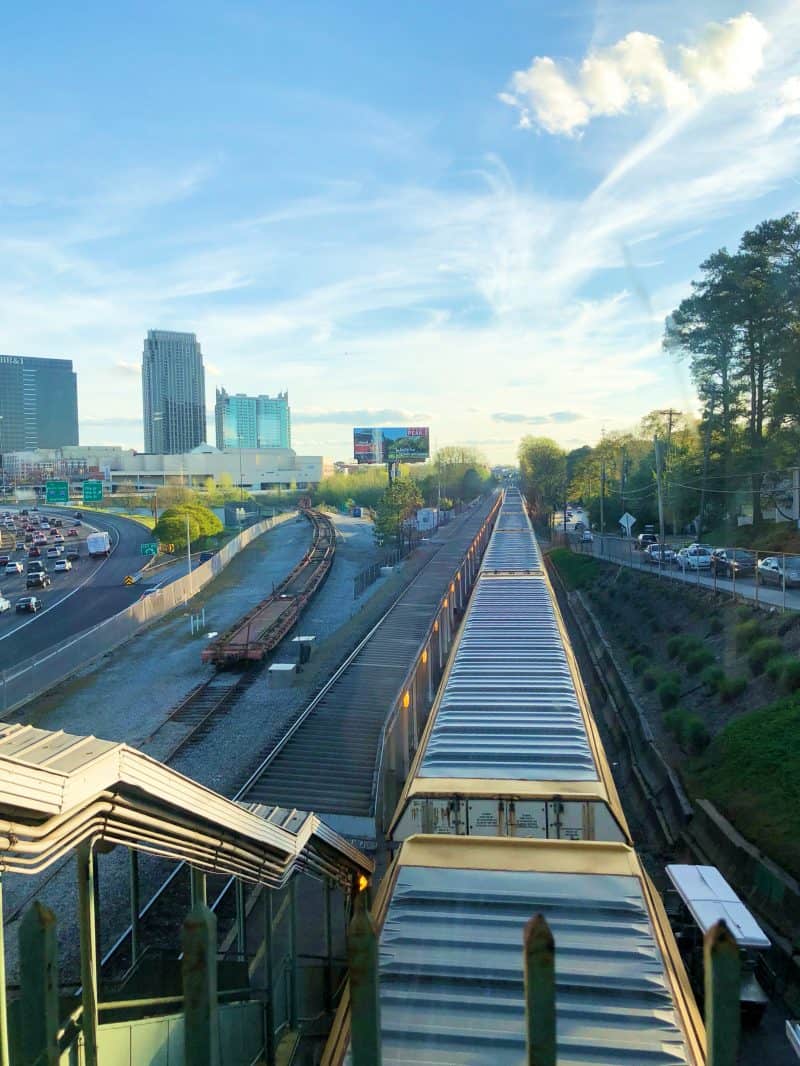 Since we were traveling in the Sleeper Car, we had a “first class” waiting area at the train station and were the first to board when our train arrived.  We were giddy and almost running down the platform to see what was in store!  We were cheerfully greeted by our host, Grady, and shown to our accommodations.  Here is what it looked like inside… a narrow hallway with sliding doors to each room. 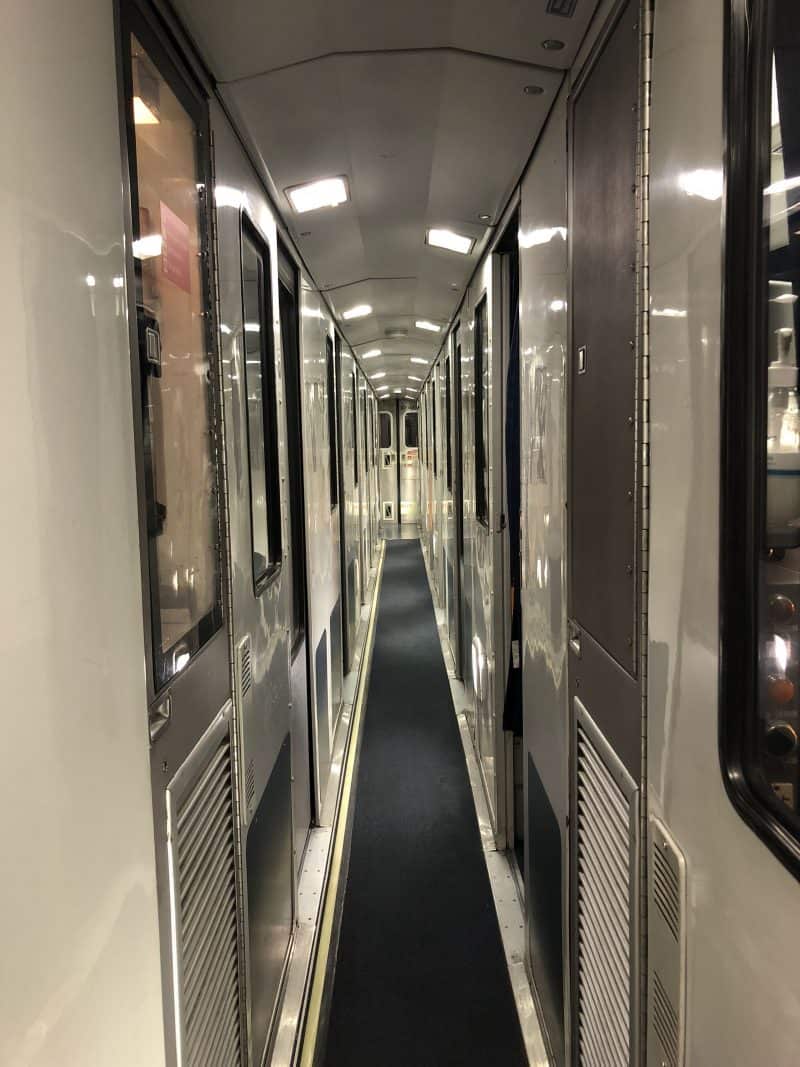 We booked two Viewliner Roomettes for our trip.  They are designed for one or two passengers, with large seats on either side of a picture window.  At night, the seats convert to a bed and an upper berth is lowered down from the ceiling.  There is also a sink and a toilet, as well as storage space for one piece of luggage.  There were a lot of options for lighting – from nightlights to reading lights to full on LIGHTS.  Overall, it was smaller than I expected but comfortable for an overnight ride and well laid out space-wise. 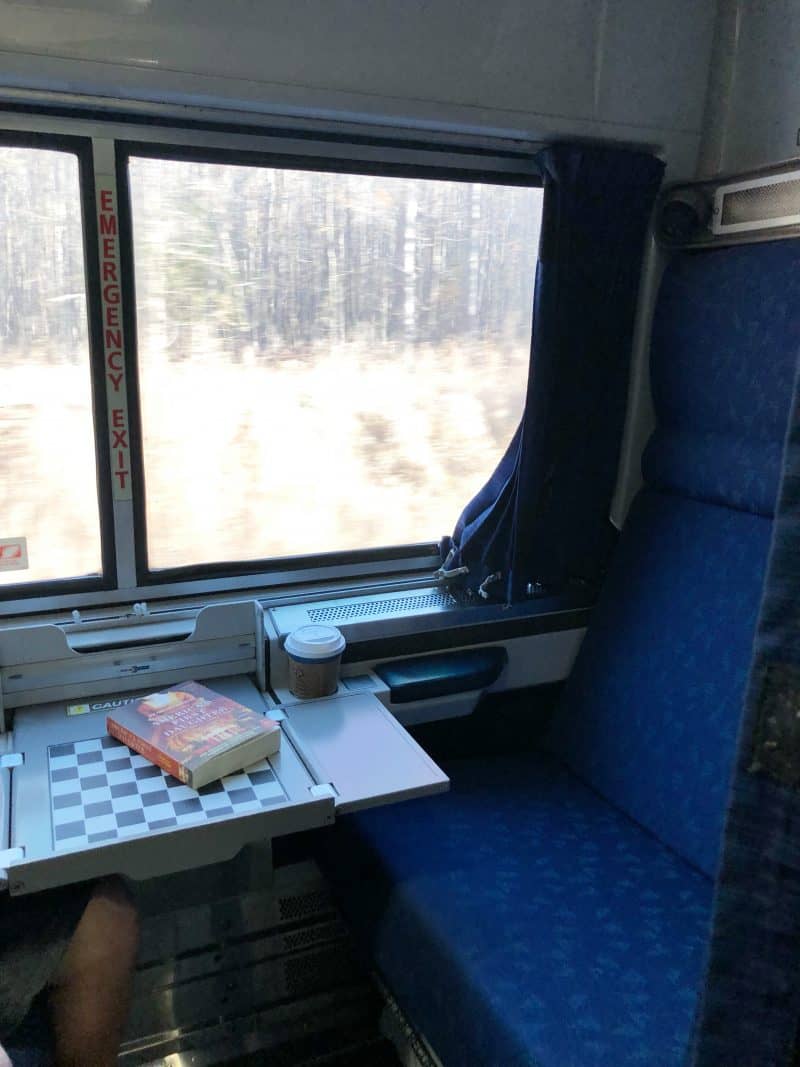 We were promptly escorted to the dining car for dinner almost as soon as we put our stuff down and checked out our accommodations.  We thought the dining car was just the bees knees. 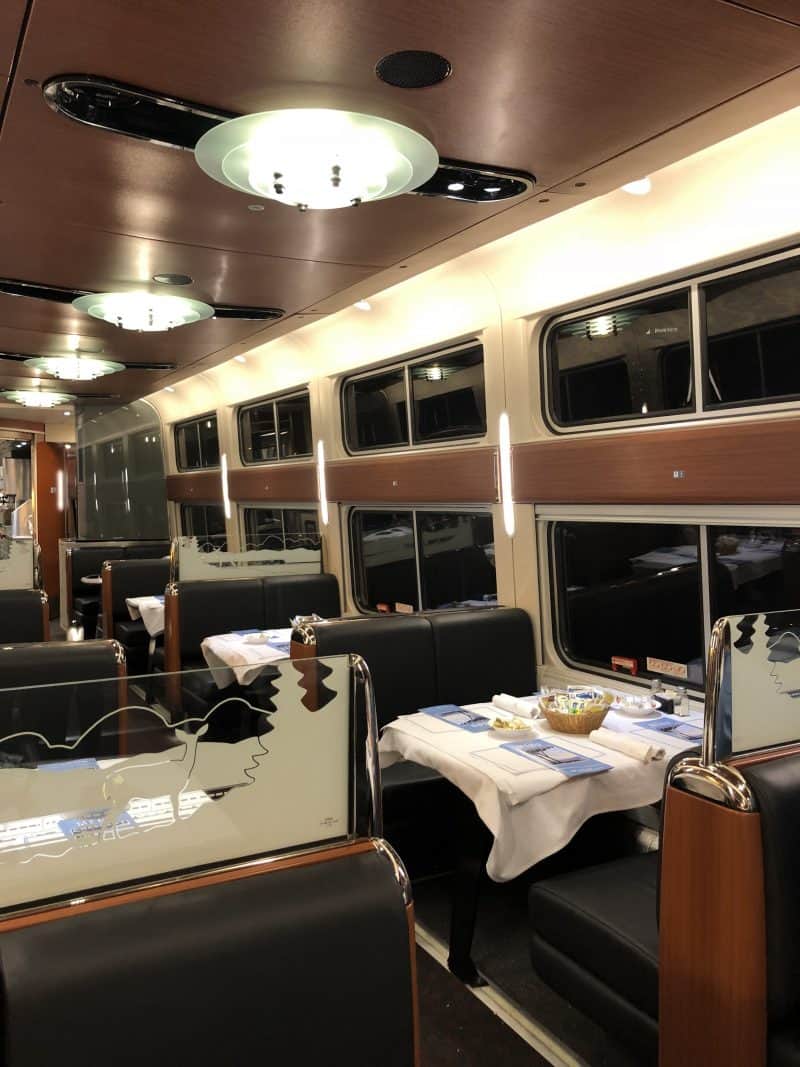 For those of you that have read the Christmas Train, I was curious and intrigued by the social aspect of train travel portrayed in the book.  I can tell you that it was SO true!!  I absolutely loved that part about our train travel.  Everyone is chatty and friendly and that is just encouraged (if not forced) in the dining car.  You are seated in the order in which you arrive and they fill up a table before moving to the next.  Everyone chats across tables as well.  Funny enough, we met a Coke Exec that I had exchanged numerous emails with in my time at Coke but never met in person!  He was also a GT alum! 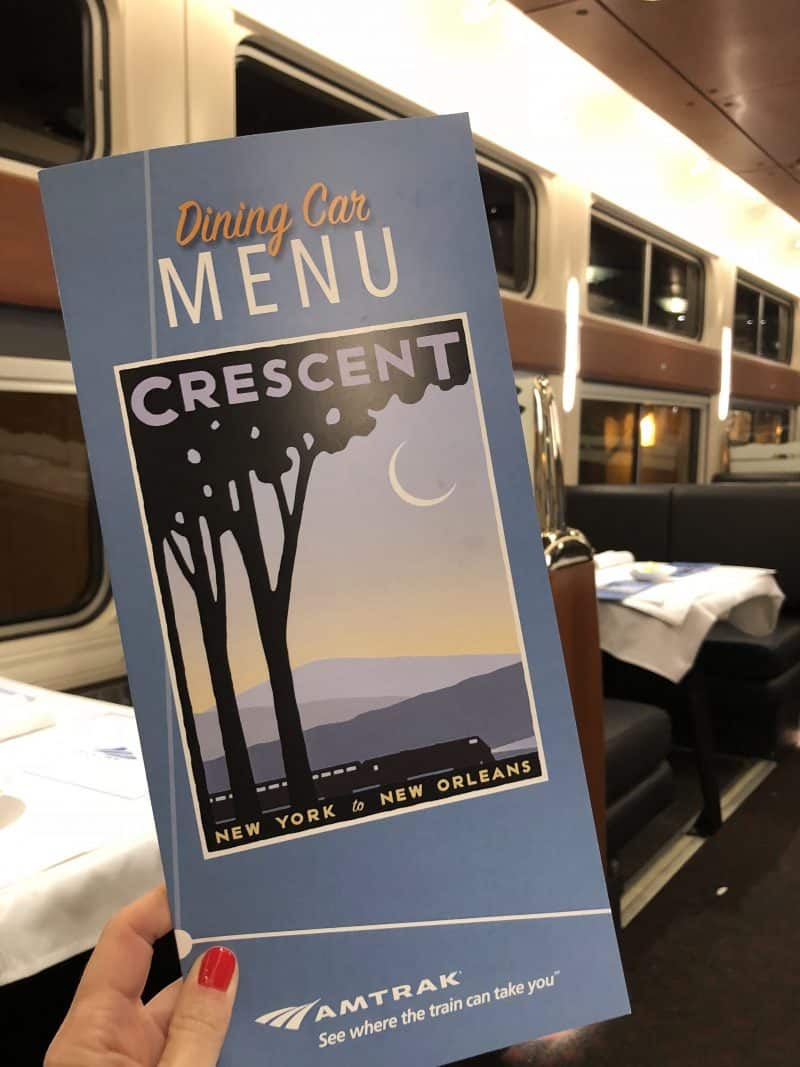 I got so many questions around the food and drinks on social media!  Well, food in the dining car is included in the cost of the trip for the sleeper guests, otherwise it would have been pretty pricey for what you get.  The service was wonderful and the food quality was okay.  I mean, you’re on a train :-)  It is definitely better than airplane food.  They do serve beer and wine, and have a full bar as well.  Alcohol is not included. 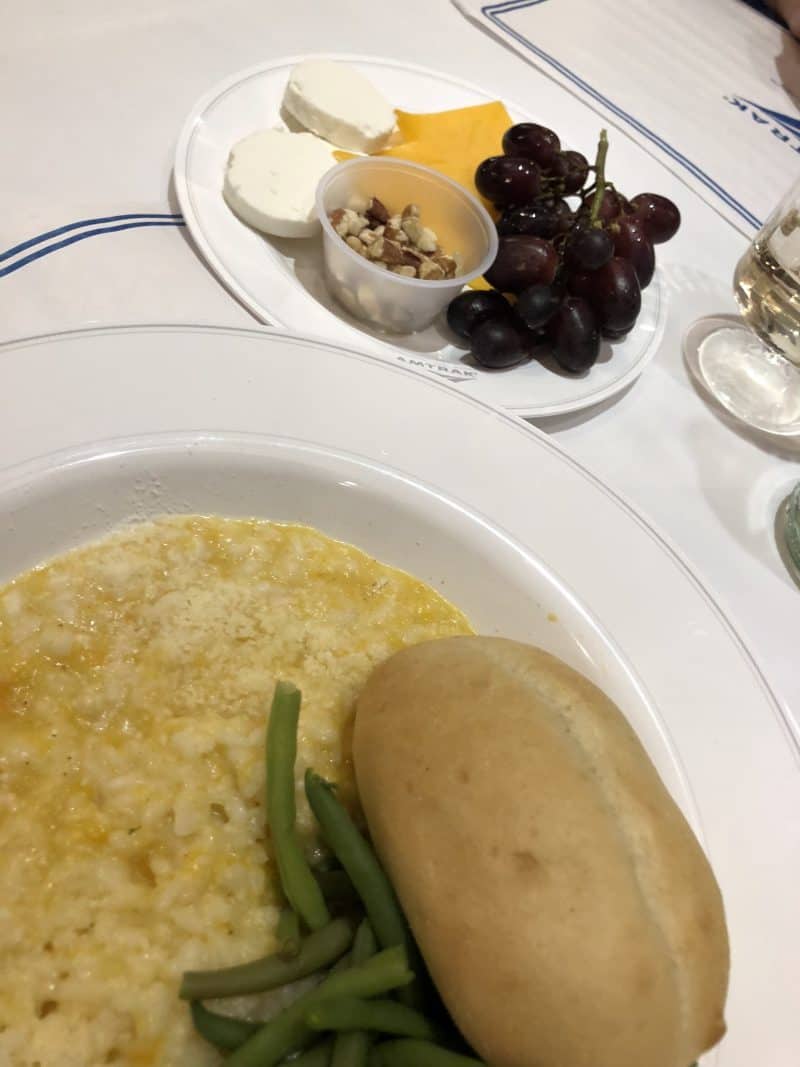 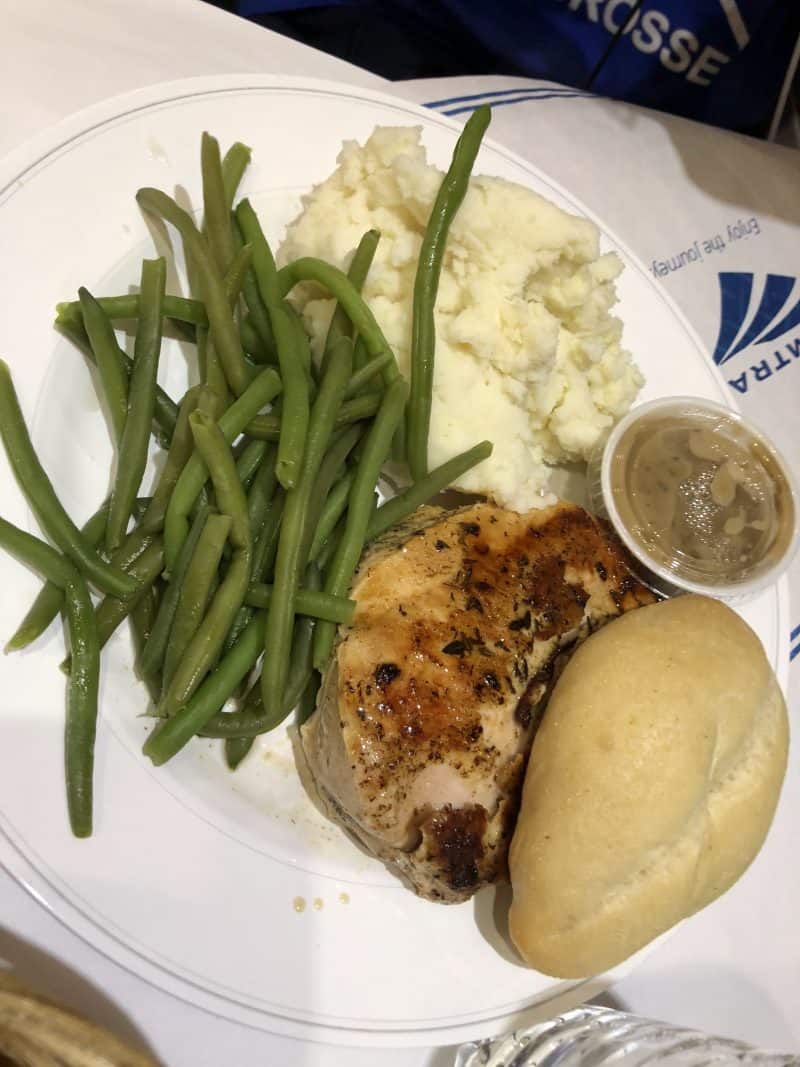 When we returned from dinner our roomette had been prepared for bed.  It was so small that it was hard to get a good picture for you. 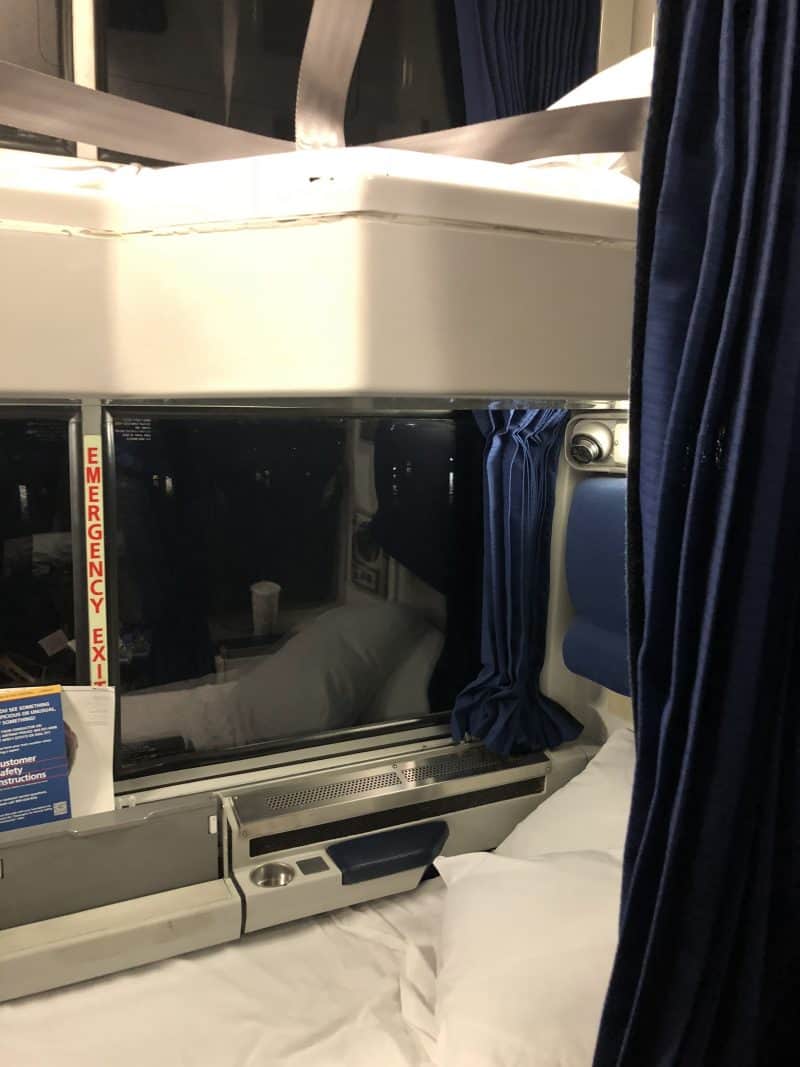 Our roomette was directly across the hall from Honey and John.  We could easily talk between the two rooms with a normal volume level.  The two early birds did a little reading and then were off to sleep…   Oh, and another question I’ve been asked a lot about this adventure is “how did you sleep?”  The boys were out like a light.  Honey and I didn’t get a lot of sleep.  I was prepared for that – I honestly don’t sleep well the first night or two anywhere I am.  I have to reach the point of sheer exhaustion. 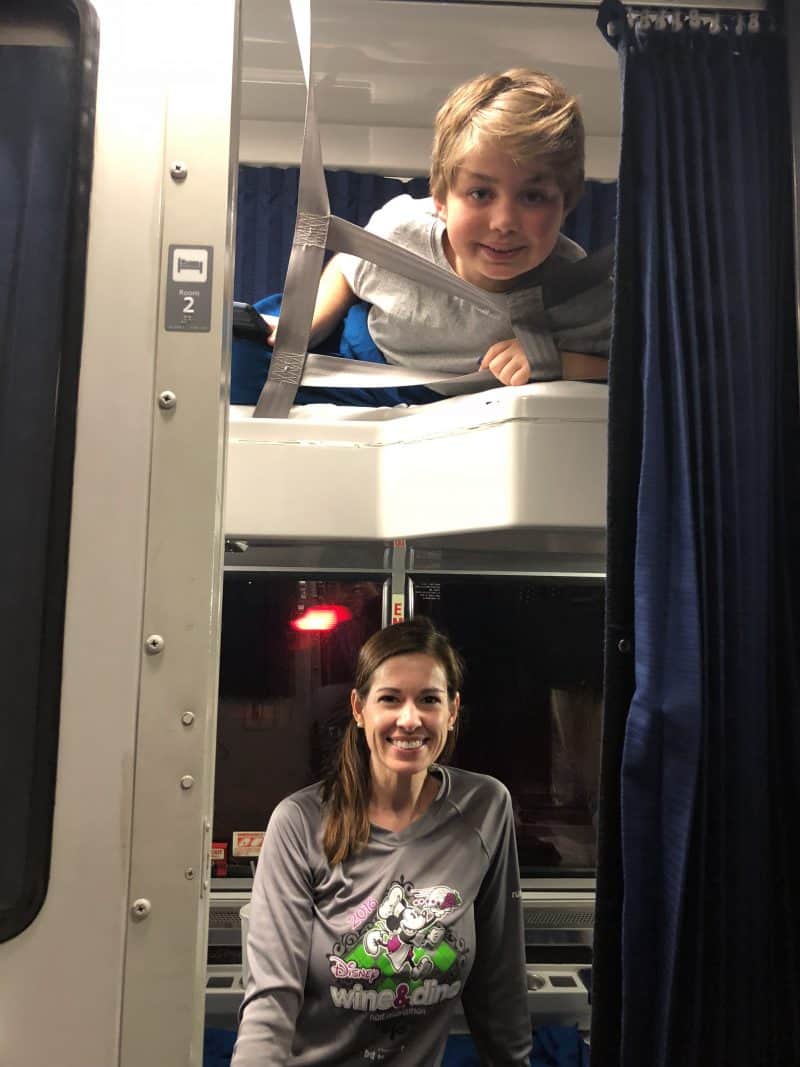 We woke up the next morning and checked the Amtrak site right away to see where we were – Lynchburg VA!!  We loved that the train had wifi and that we could track where we were and where we were headed next throughout the trip. 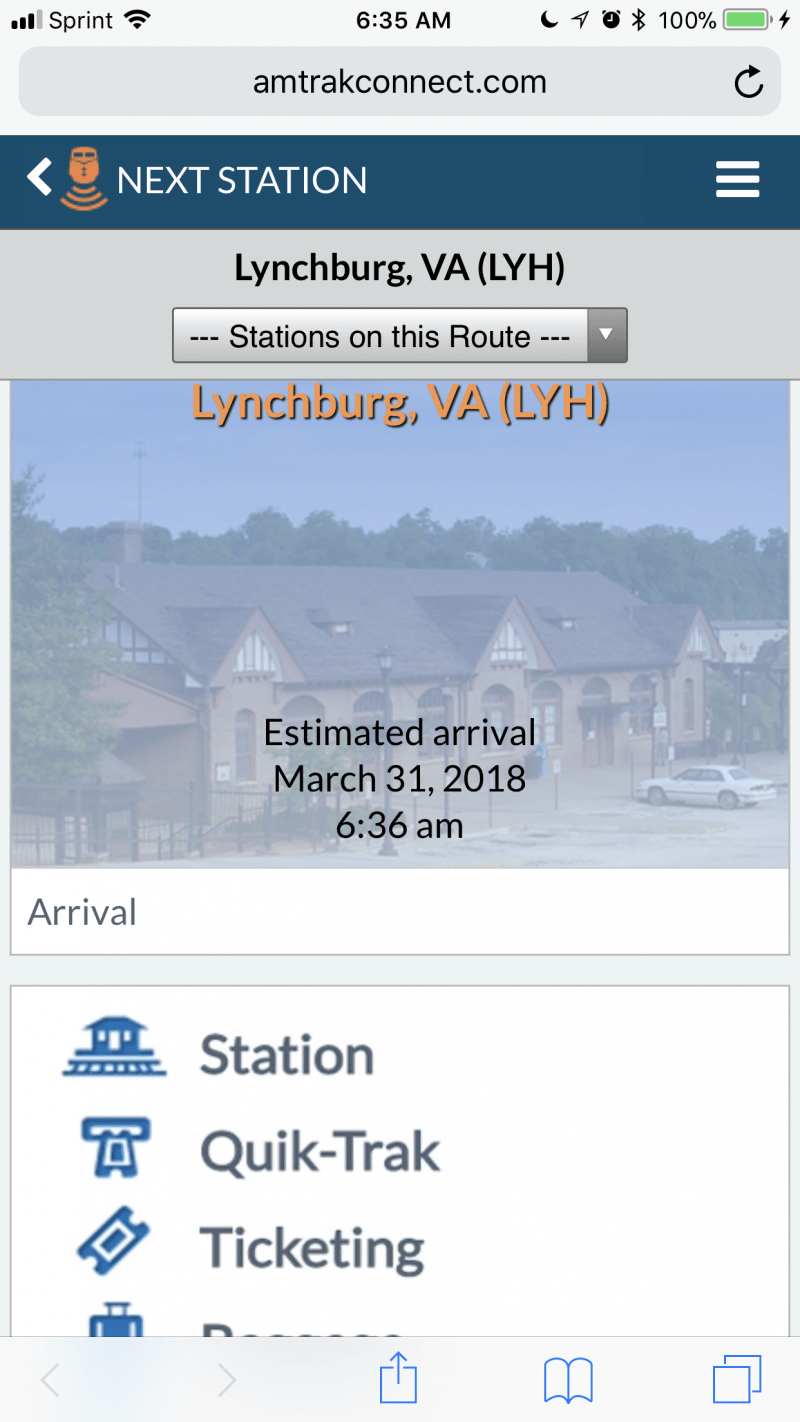 While the night was fun and festive with dinner and the newness and novelty of the whole thing, morning was almost surreal sipping coffee and having breakfast as we rolled through Virginia.

Speaking of which, Whit and I made it to breakfast before John and Honey and were seated with a dad and his daughter traveling from Atlanta to DC for spring break just like us.  We loved meeting them, exchanging stories and talking about our week ahead.  He is the director of the Mock Trial program for the state of Georgia and his daughter is in 5th grade.  Did I mention that we love meeting people?! 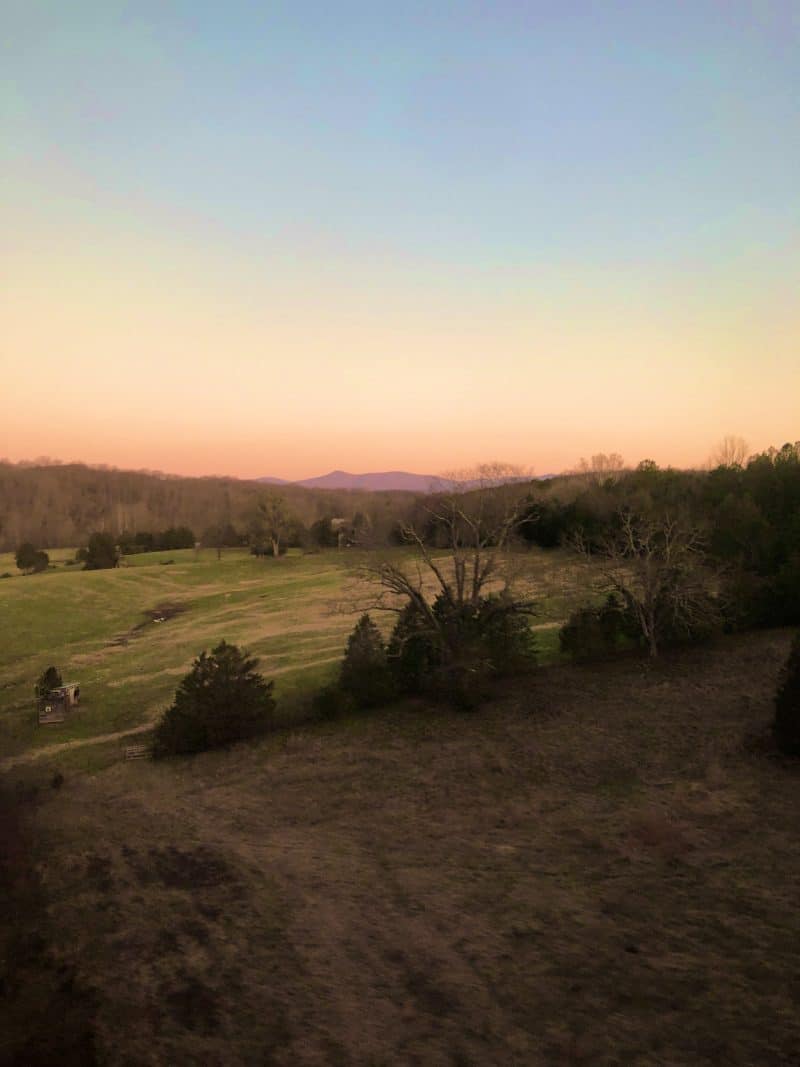 Almost too soon and our adventure was over!  We arrived in the beautiful Union Station in Washington D.C. and were ready to hit the ground running!!! 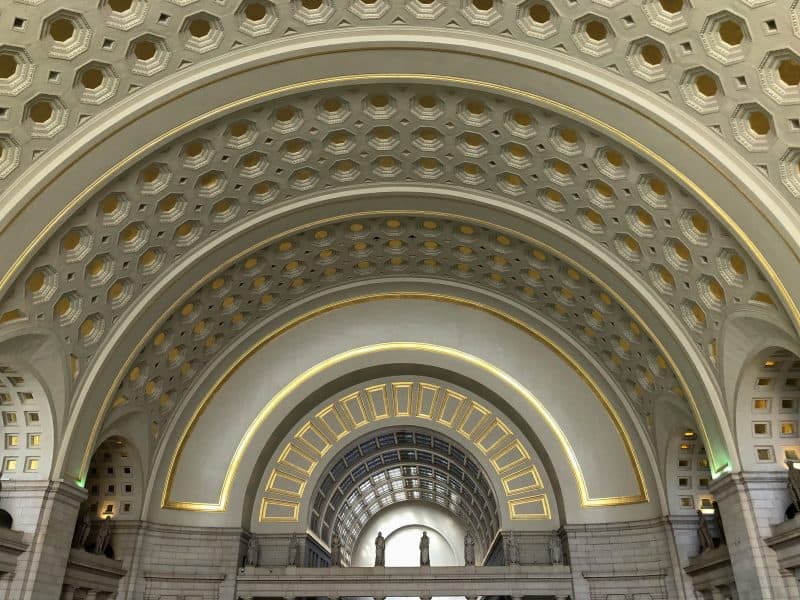 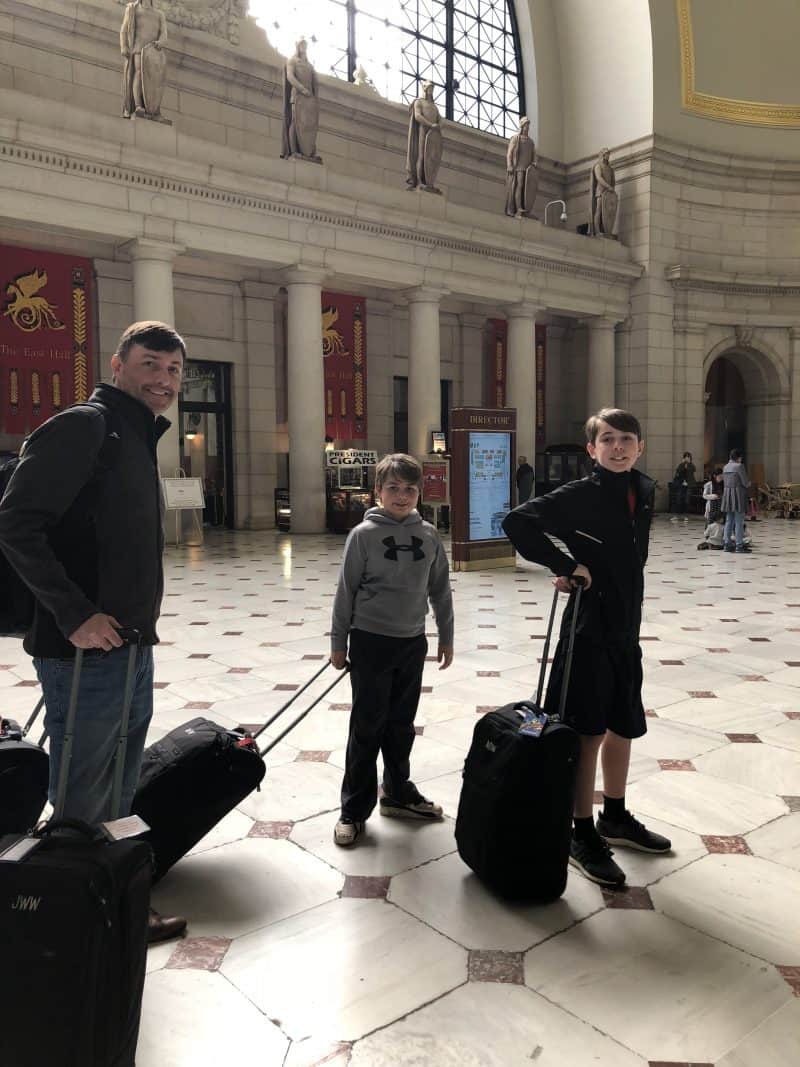 My thoughts and tips on the train…

I am happy to answer any other train questions to the best of my ability!  Ask away! 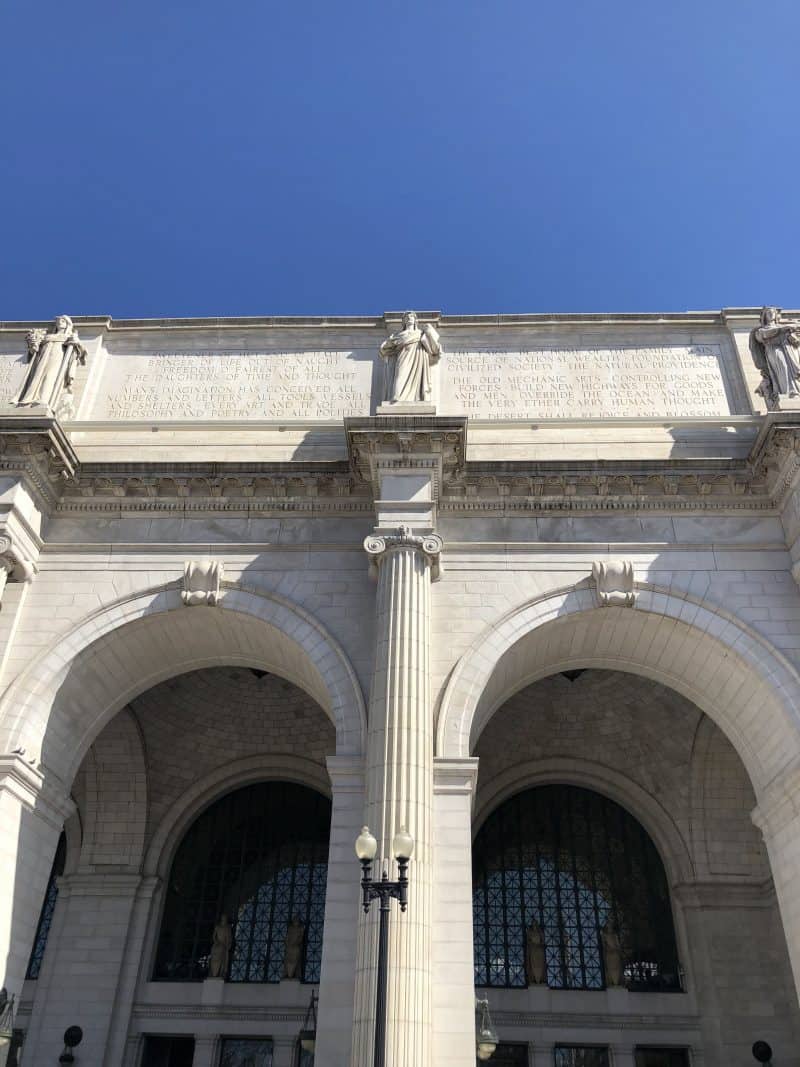 As for the rest of our trip, I’d love for you to follow along or catch up here!

11 thoughts on “Dixie Delights in D.C. {The Amtrak Train from Atlanta to D.C.}”