Having wrapped up an exciting five days in Washington D.C. we picked up our rental car and were off for George Washington’s Mount Vernon.  My original agenda had us heading straight for Colonial Williamsburg, but when I realized this was on the route, we took a day to visit.  And I am ever so glad that we did!  Mount Vernon was yet another highlight of our trip and one of our collective favorites from the trip as a whole. 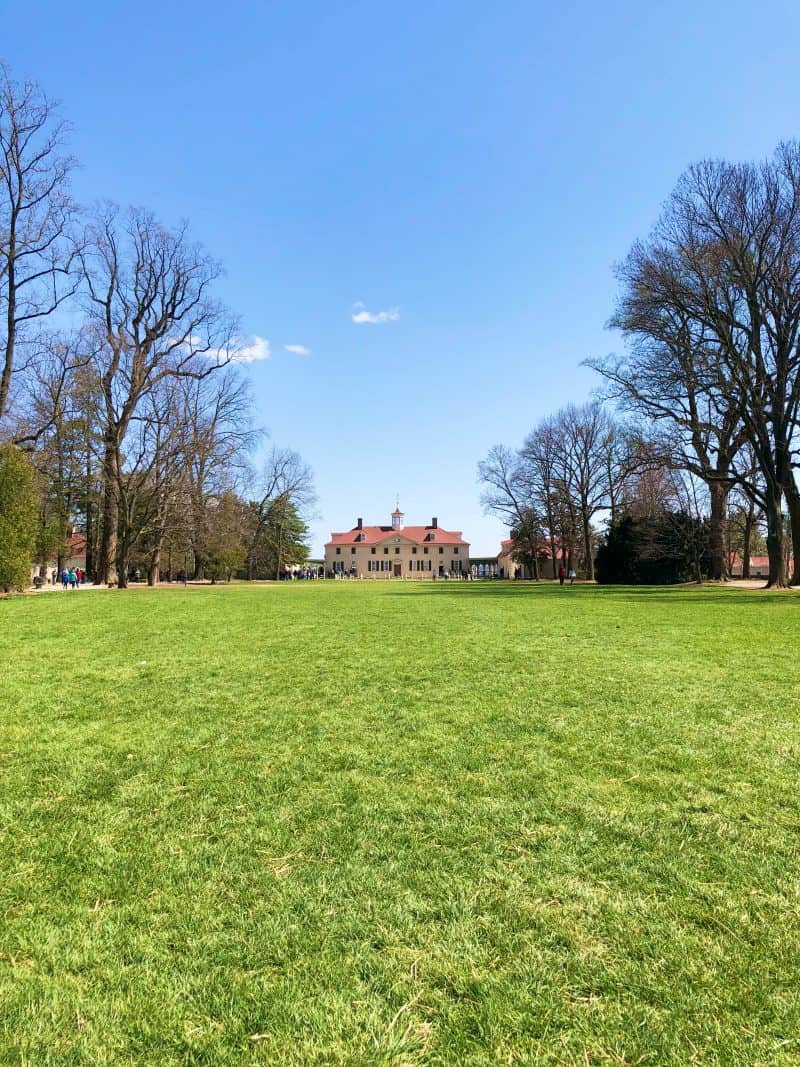 As we approached the Mansion, we all were so excited to visit the actual home of George Washington.  Funny enough, we all noticed that the door was off center, and we later learned the reason why in our tour. 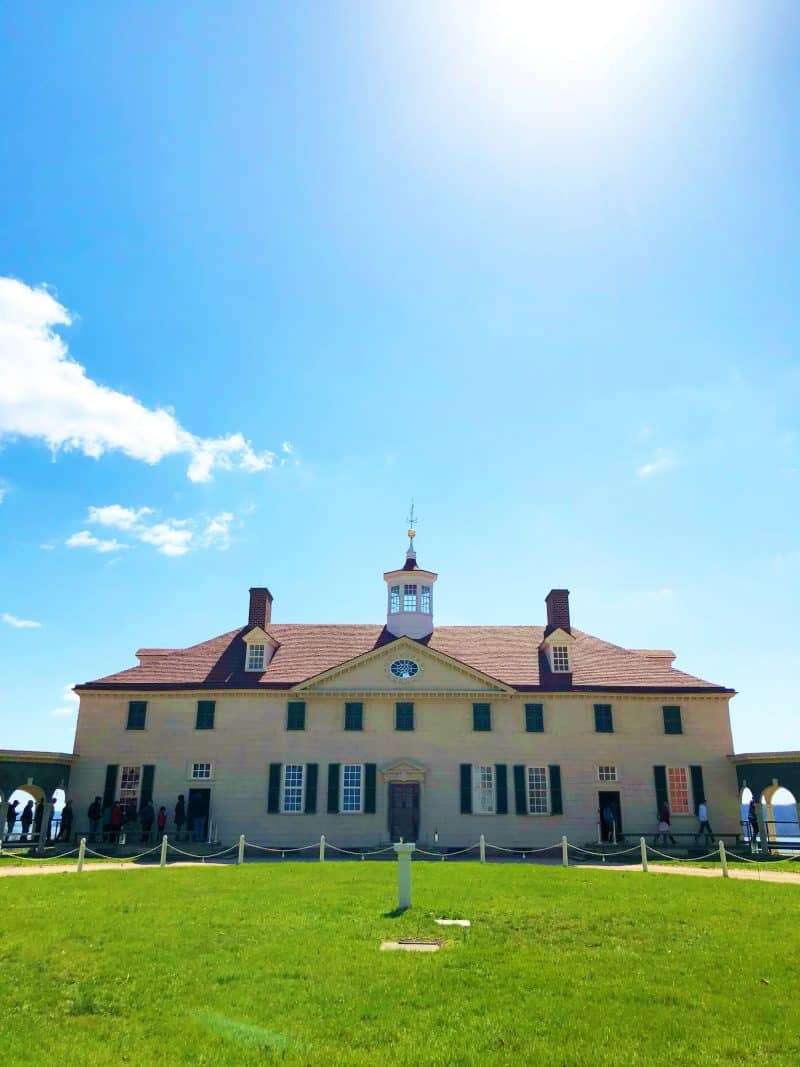 Speaking of tours, I bought tickets for the National Treasure Tour.  I forgot that I had purchased tickets for the Premium Mansion Tour later that afternoon and there was a ton of overlap.  The National Treasure Tour was interesting if you enjoy the movie, but you definitely don’t need to do both!  Of the two, I 100% recommend the Premium Mansion Tour because it gives you access to the basement and 3rd floor of the home and you only have 15-20 people in your group with a private guide. 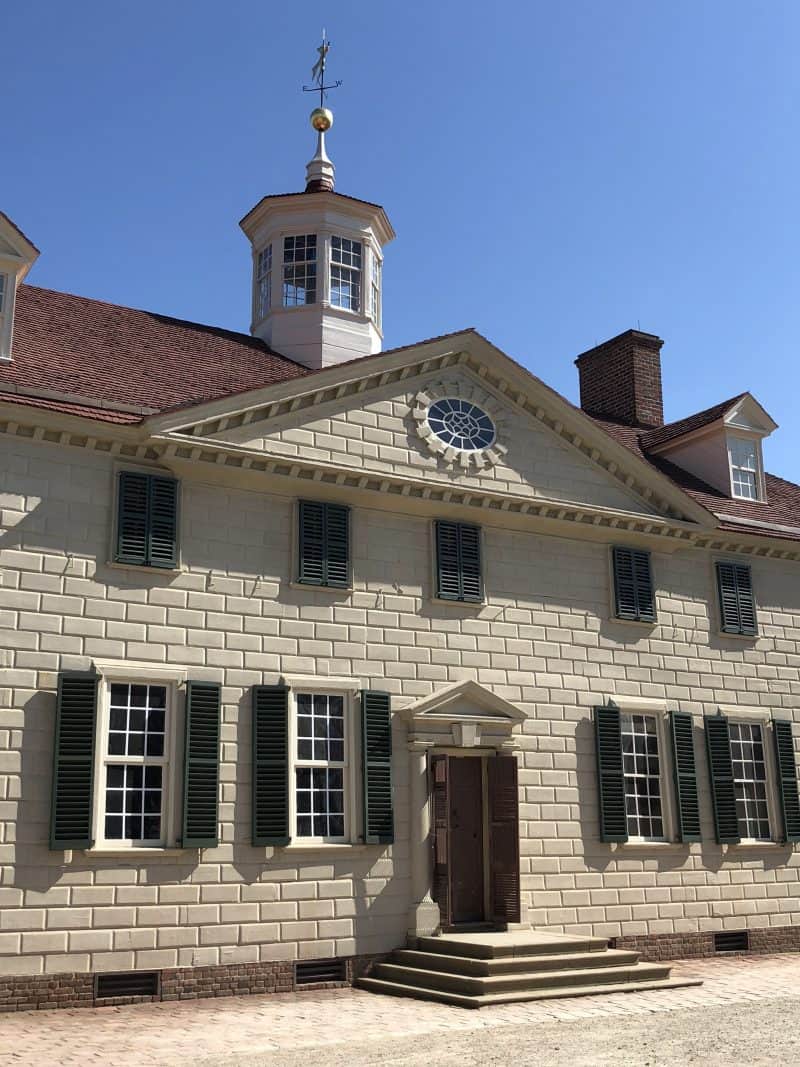 Photos are not allowed inside of the house, sadly.  It was so beautiful inside, full of furnishings, accessories and artifacts detailed to look as it did in 1799, the year George Washington died.  We learned that 40% of the home is original, and the rest of the content is period or reproduction.  40% is really a staggering number considering how old this home is and the disrepair into which it eventually fell.  (Having grown up in Savannah, I’ve always been thankful for historic preservation societies and after this trip that feeling tripled.)

We all had an “I can’t believe we are standing on George Washington’s front steps!” moment here. 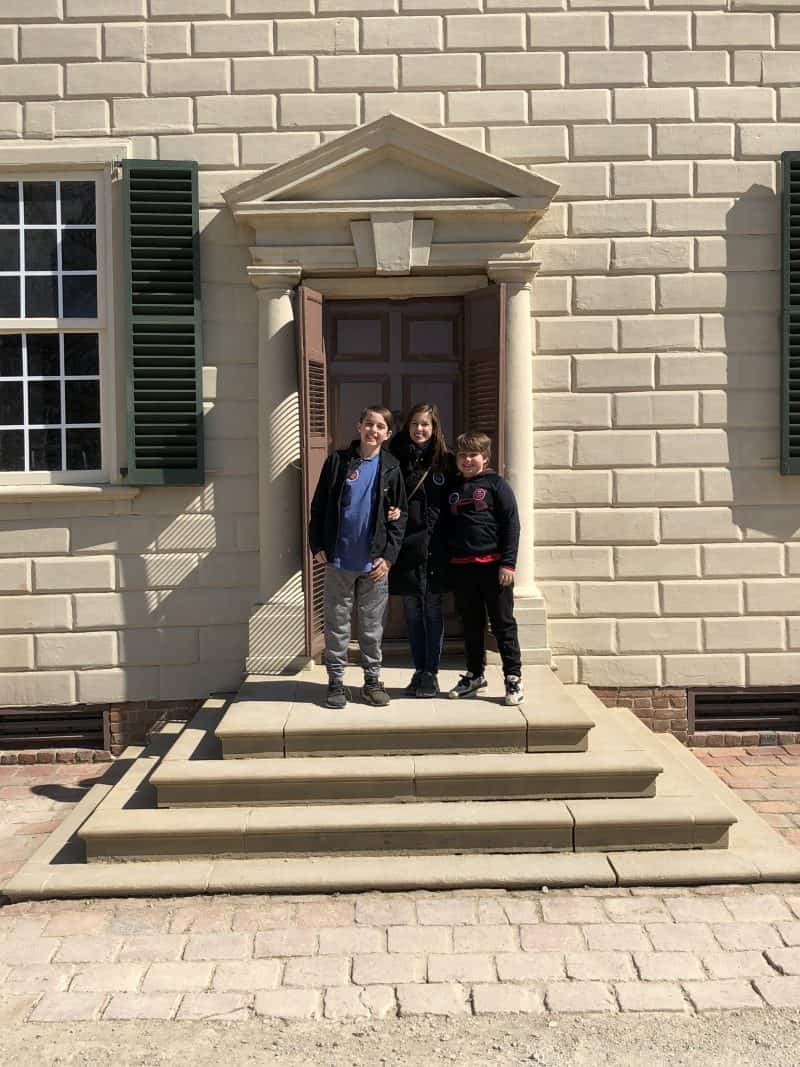 I so wish that I could have taken pictures to share with you.  The front parlor is undergoing a massive renovation and all four of us LOVED reading this article.  It is absolutely fascinating!

Both the National Treasure Tour and the Premium Mansion Tour take you into the basement.  We learned what this space was used for and the water issues that have plagued Mount Vernon since Washington’s time.  In fact, this primitive drainage system was uncovered for the time being! 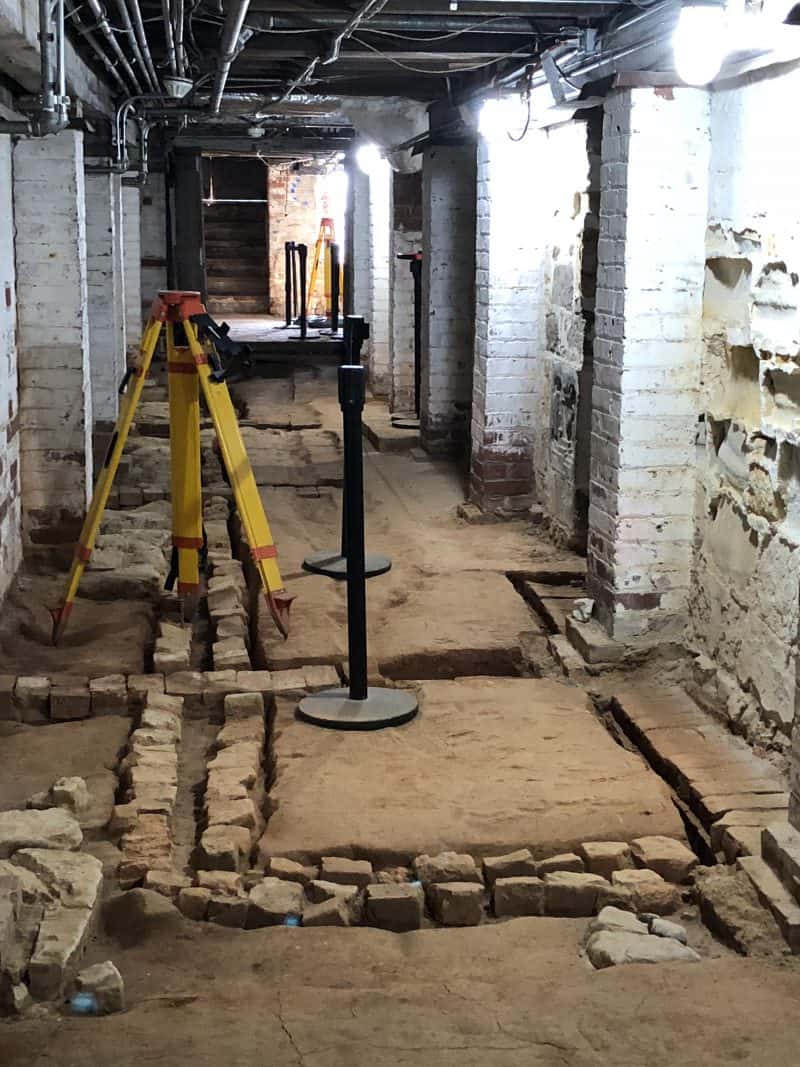 It was surreal to walk through this home and expansive estate and see the place where the father of our country lived, innovated, worked and died.  At one point when we were walking to the third floor, one of my boys asked if the handrail was original.  And it was!  I literally shivered at the fact that I was walking up the stairs just like the Washingtons did and holding on to the very handrail that they used.  I didn’t say anything at the time, because I was kind of soaking in the moment, but Honey later brought it up and said he felt the same way.  Then, in typical Honey fashion, he added “It was incredible that we were holding on to the same rail George Washington held.  And then 40 million people after him.”  HA! 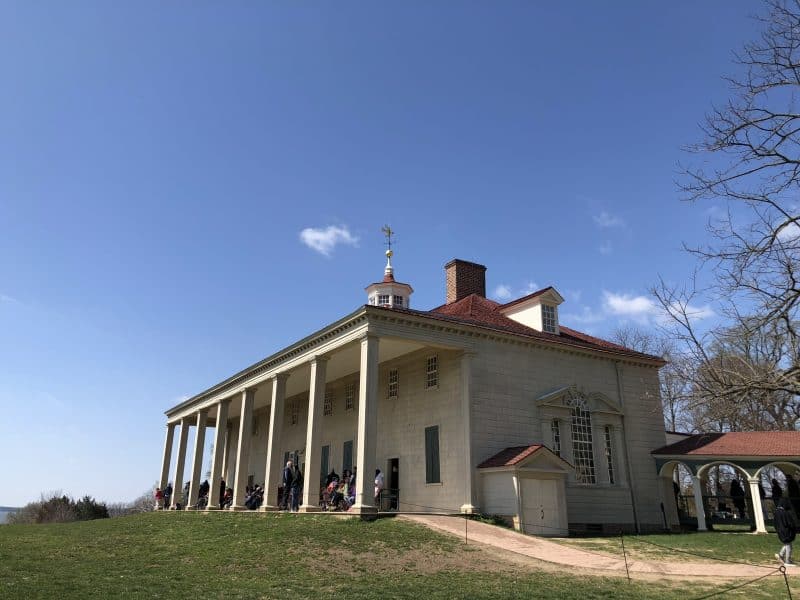 We took a few minutes to sit on George Washington’s porch and view the Potomac from his vantage point. 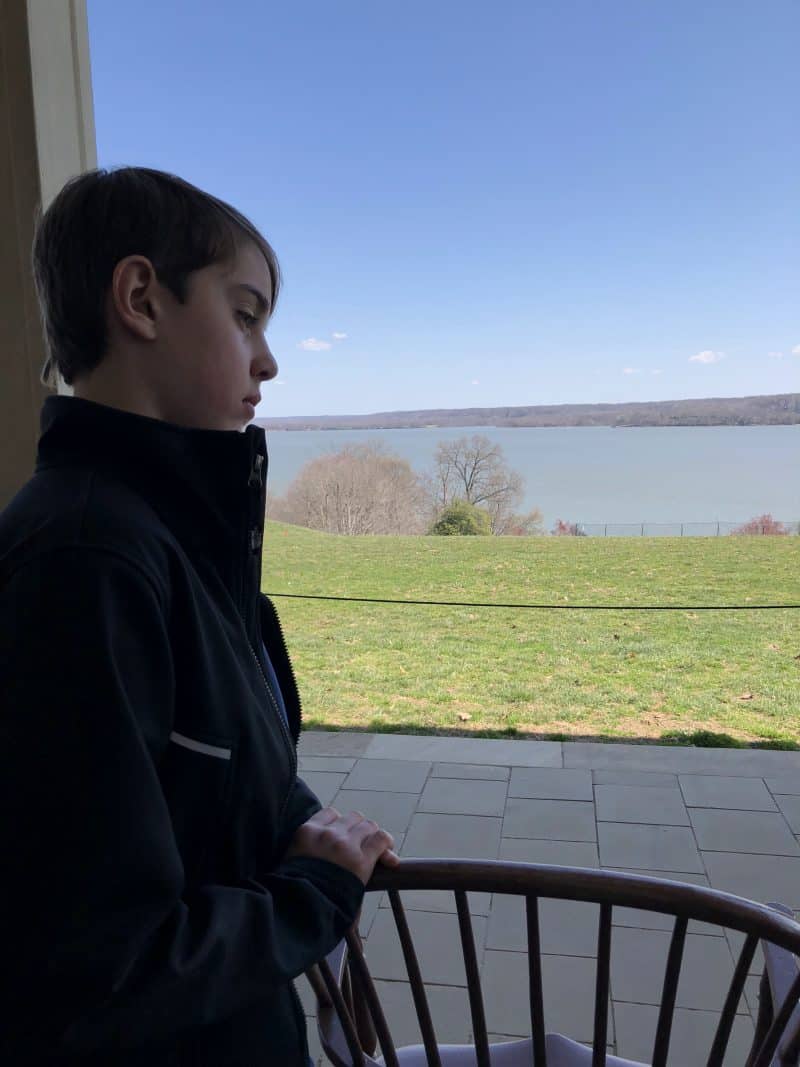 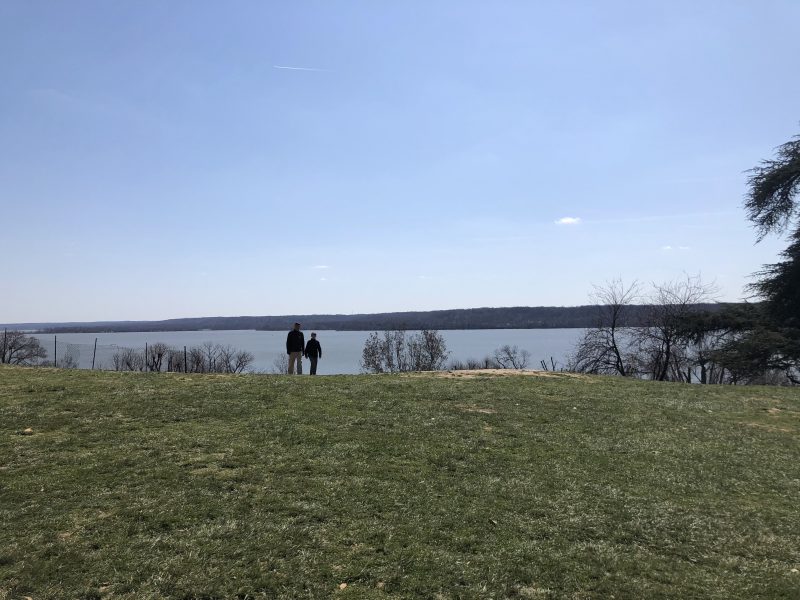 This ha-ha wall was put in place to keep the cattle from grazing on George’s lawn.  He didn’t want to spoil his sweeping view with a fence so he built this instead.  From the house, you can’t even see it is there.  They called it a ha-ha wall because guests that weren’t watching where they were going would fall right off. 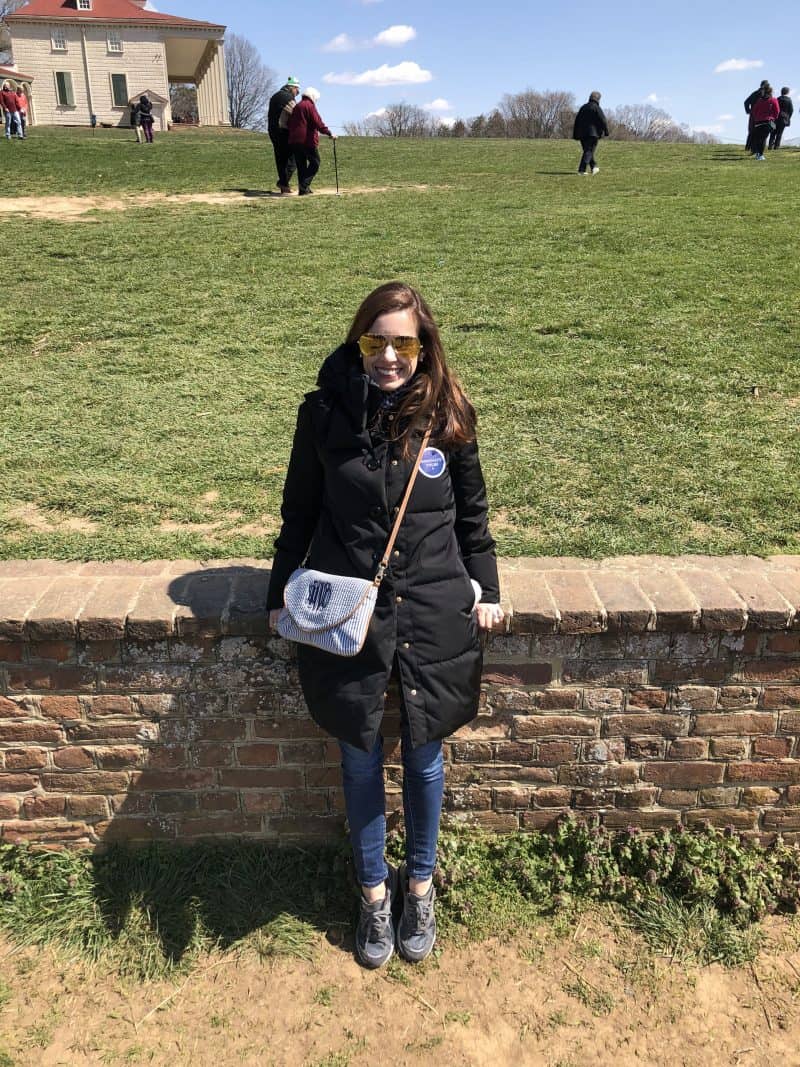 Here you can see the ice house (top left) and a gazebo that has yet to be determined if was here in 1799 or added later. 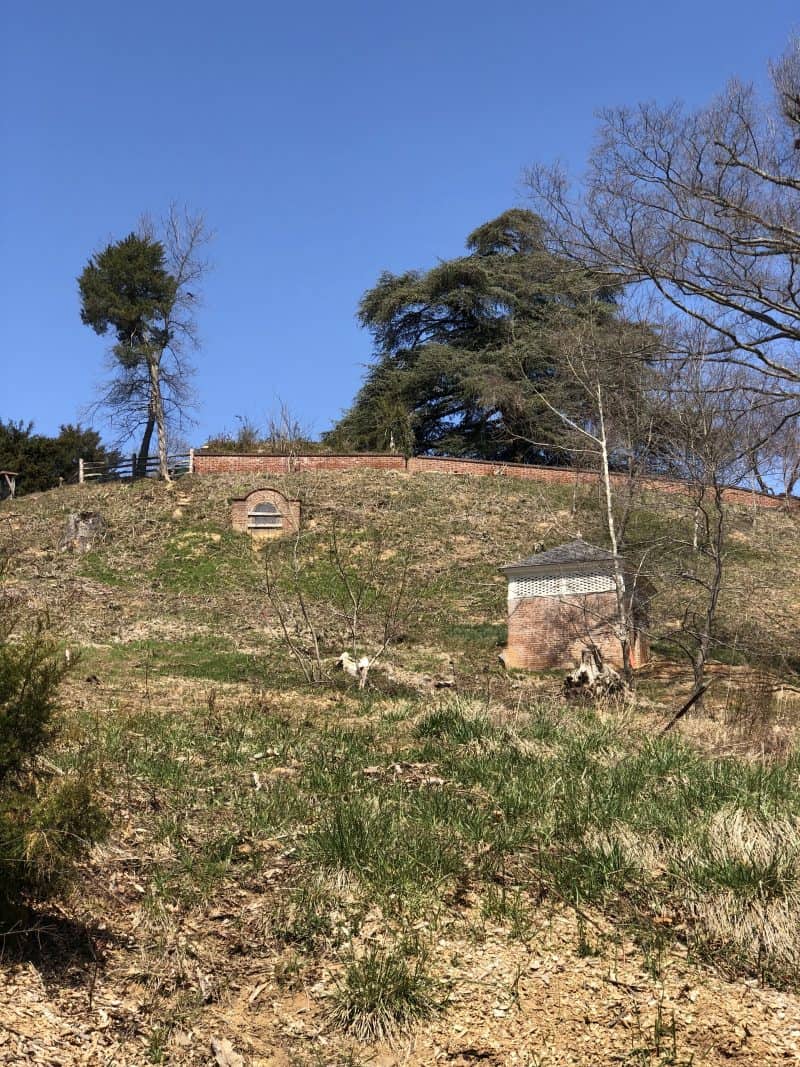 Aside from the mansion, there are SO many other things to explore on the garden and grounds like animals, slave burial grounds, and the distillery and gristmill.

Two of the more fascinating parts, in my opinion, were the original vault and Washington tomb.  George wrote in his will that this old vault needed repairs and was poorly situated and that he wished to be entombed in a new one “made of brick, larger in scale and built in the Vineyard Inclosure.”

George, Martha and twenty-one other family members were originally buried here.  They were moved to the New Tomb in 1831.  I had no idea that there are no direct descendants of George Washington.  Or Abraham Lincoln, for that matter. 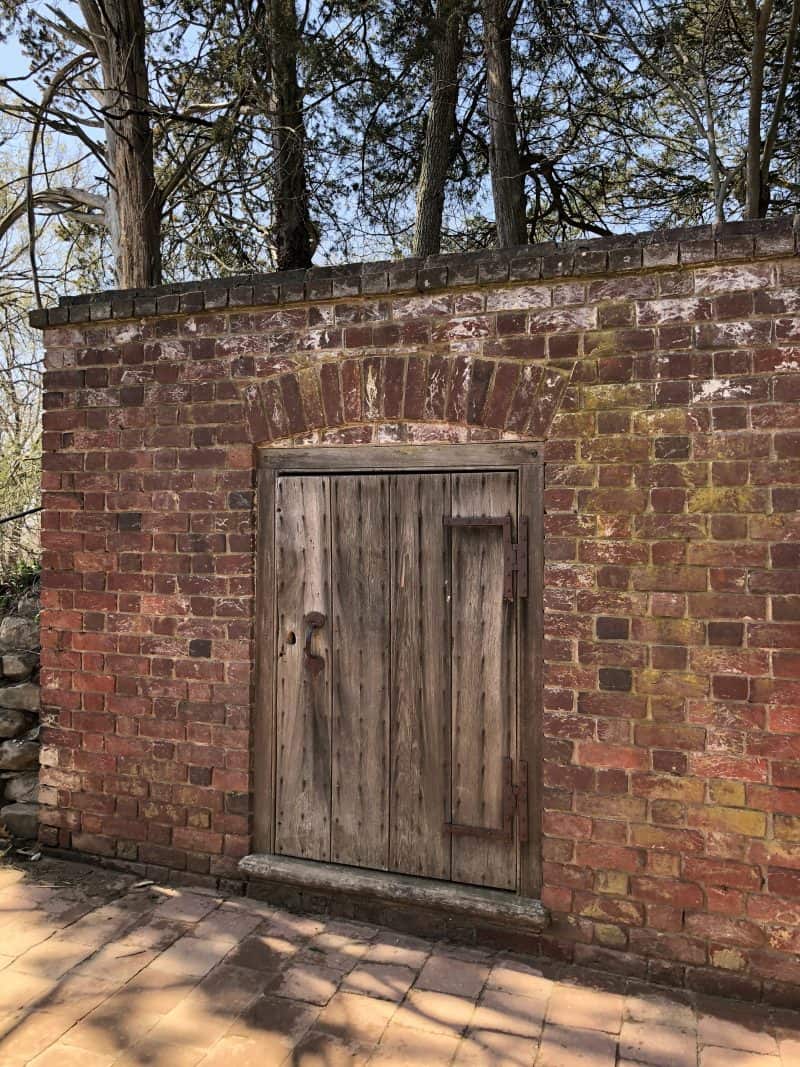 And here, is that new tomb.  Again, it was a bit unreal to be standing before the grave of George Washington.  I felt compelled to say a little prayer of thanksgiving for everything he did for America. 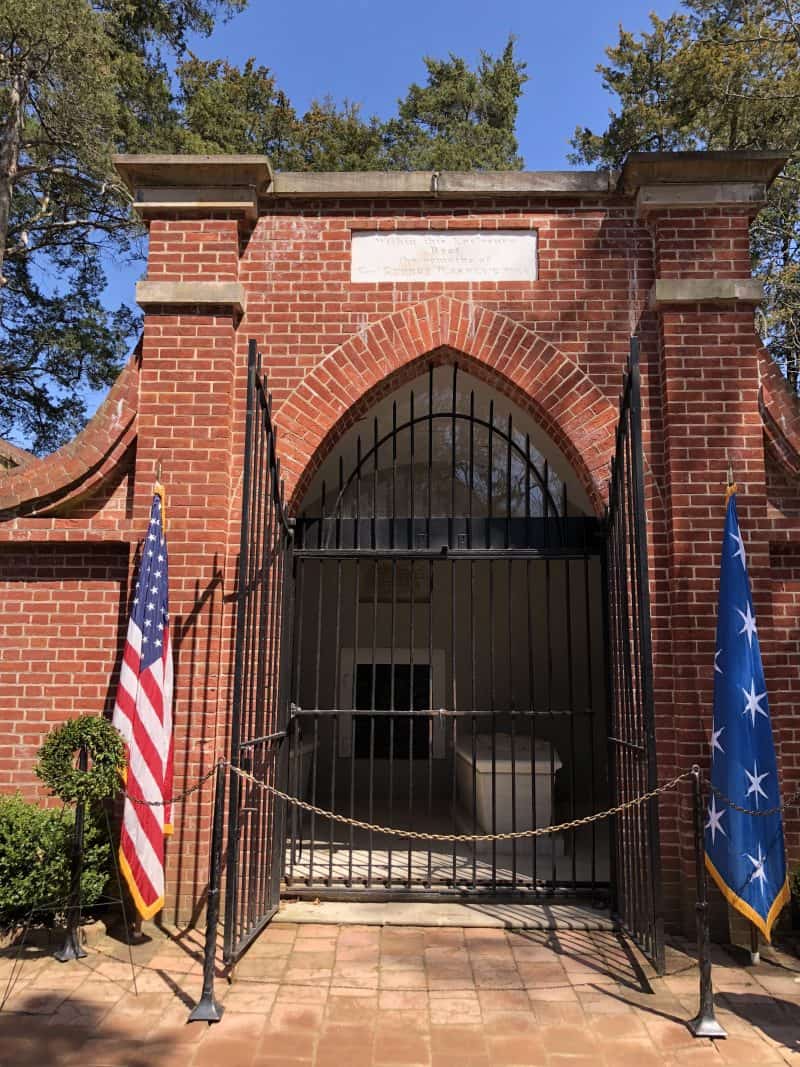 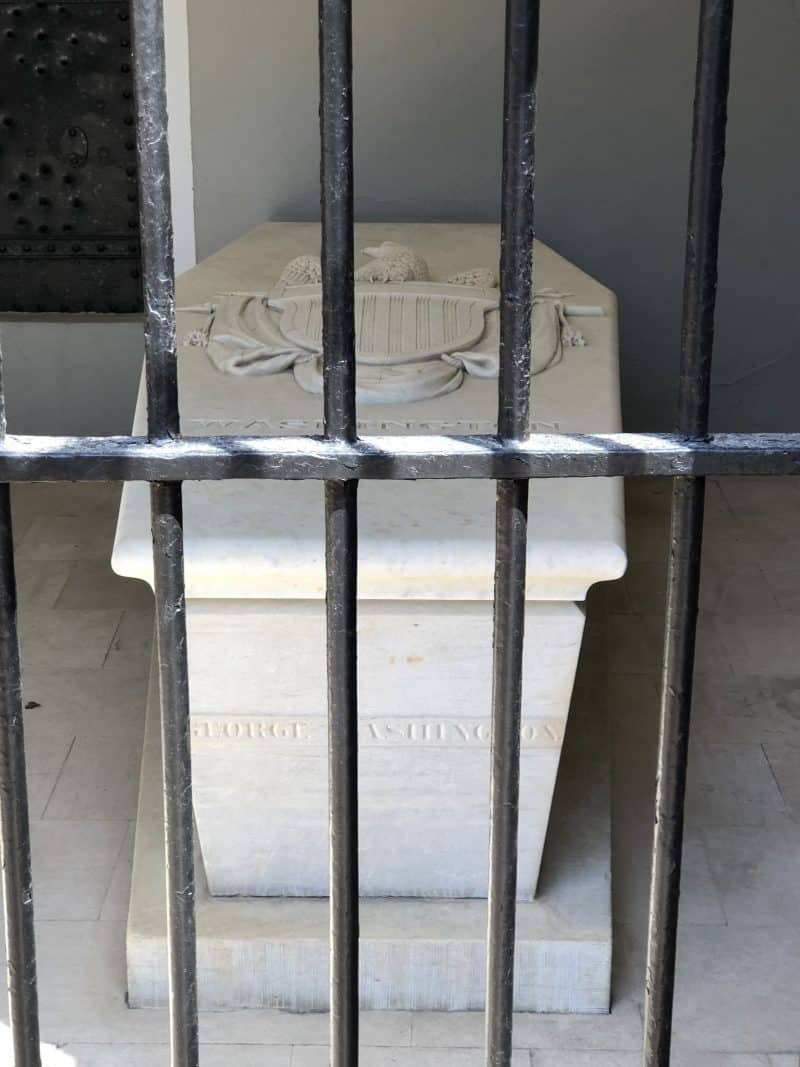 In between our touring we took some time for lunch at Mount Vernon Inn.  I originally thought we would grab a bite at the food court but it was a busy day and we wanted to sit and have a bit of a better meal.  I tried the “famous” Virginia peanut and chestnut soup for the novelty of it and a salad.  The food was better than the food court looked, but not among the best we had on the trip. 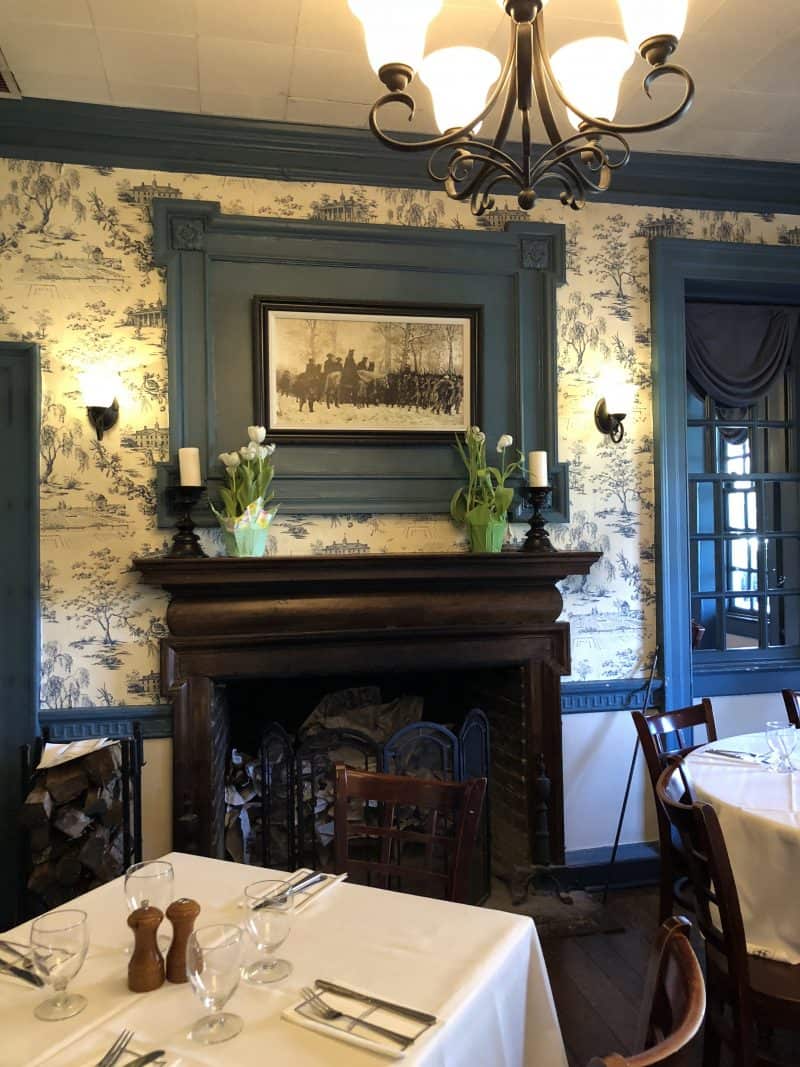 I loved the wallpaper and thought they should have sold tea towels or pillows in this pattern! 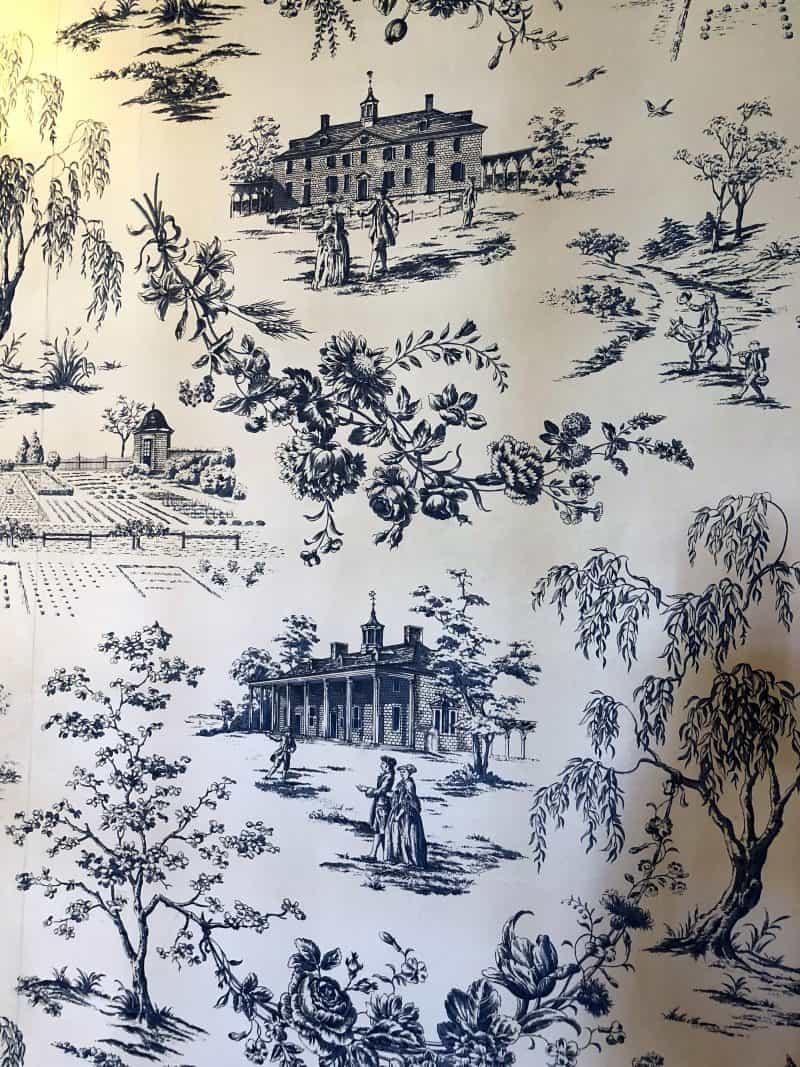 As for the rest of our trip, I’d love for you to follow along or catch up here.