The highlight of the week for John was bringing home a color-changing water bottle craft.  Some concoction of oil, water and red food coloring I suspect.  Here is the conversation that ensued:

John: (as he lovingly holds it out in his arms) “Mommy, this is Color-Changer.  I love him SOOOO much.  He’s my second brother.” (then hugs the silly bottle within an inch of it’s life)
Mama: (snapping myself out of utter dumbfoundedness) “Welcome to the family…um…color changer… brother (clearly by another mother).”
[John proceeds to shake and twirl his “second brother” in a way that makes his first brother salivate at the thought of getting his hands on it. ]
Mama: (visualizing the top coming off and red colored oil and water flying all over the car) “Keep that thing away from your brother or you know he’ll screw that top right off in two seconds flat and try to drink your strange concoction.  I mean…your strange second brother.”
John: “Heavenly Father, please help Coocoo to learn to be a good baby that won’t drink my color changer brother.  Oh, and please help my baby (Cookie) learn to swim like Cae’s baby (who is also 2 years old and is no closer to swimming that Cookie). Aaaaaaaa-men.”
[Mama is torn between being proud to hear her son praying and perplexed about the topic of his prayers.]
John: “I have also crossed my fingers on both hands just in case God didn’t hear me.”
Mama: “Well then I’d venture to say we’re covered on all fronts.”

And as if color-changer bottle didn’t knock our socks off , the VBS week culminated in a concert where the littles showed off their songs, art work and new friendships.  I think that my ears have never heard a sweeter sound than a hundred little raising their voices in proclamation of how much GOD LOVES THEM!

PANDAMONIUM
As if that wasn’t wild enough for one week, in our usual fashion, we thought it would be astounding to throw in not just a stomach bug and multiple power outages but a trip to the urgent care to boot.

Luckily the bug was short lived and limited only to the PCP.  He missed Monday at VBS but was fully recovered by that afternoon.

It’s been raining cats and dogs here off and on all week!  Our power has been out three times for hours at a time.  So, we made the most of it by building indoor forts, coloring and puzzling by flashlights and playing I Spy In The Dark.

As for our trip to the Urgent Care, John took a little tumble and gashed open his knee this time around.  The PCP took the three stitches in stride and, actually, found them quite unimpressive compared to the fourteen he “earned” in his chin last month.  Just to make sure he was a-ok, we made a little jaunt by Pinkberry (recall how I treat my children with treats that I secretly really want) to sample their new summer flavors.  While John’s watermelon cone was perfectly delish, my salted caramel cone with chocolate shavings has got to be just what frozen yogurt tastes like in Heaven.

On that note, we’re off to procure some waterproof bandaids, an ace bandage (to assist in keeping the knee straight) and some Pinkberry.  You know, just be absolutely, positively, one hundred percent certain the PCP is O.K.
xoxo

Along with sorority big sis H and her three littles, we headed back down to Southern Belle Farm for a fun filled day convening with nature.  Having completely od’d on strawberries, this time we brought home two gallons of gorgeously plump, super sweet thornless blackberries ripe for the picking! As is standard operating procedure when at… Read More

I am still flipping out over FLIP, only the best boutique burger bar in Atlanta.  If you haven’t been, please make plans to do so now.  Each and every time I go it is just beyond amazing. Honey and I meet up for a lunch date without the littles a couple of times a month. … Read More 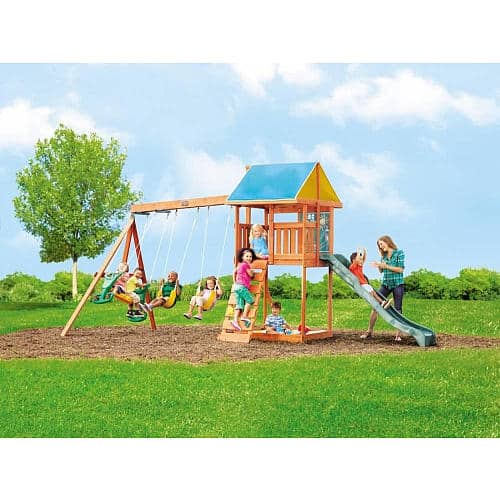 When the littles begged and pleaded for a playset in the backyard Honey jumped right on that project.  You see, this great neighborhood has one pretty major flaw – no playground!  There are a couple nearby, but nothing in walking distance.  So, we watched the sale flyers in the Sunday paper until we found an… Read More

We’re starting to gear up for Independence Day around these parts – hanging flags and gathering up all things patriotic.  Yesterday I swept up the remnants of our latest hail storm and decked out the deck in red, white and blue. And the reward for my efforts – dining alfresco (albeit on a spur of… Read More

We had such a fun and exhausting day doing everything Honey’s way for Dad’s Day! At the request of the honoree, we kicked off the festivities with McDonald’s sausage & cheese muffins (which the PCP immediately declared smelled and tasted like poop…and I could neither disagree, make him eat it nor punish him for the… Read More

This Father’s Day morning, while Honey peacefully slumbers upstairs and before we gear up for his big day, I am celebrating my own Daddy O. He’s an only child that impressed upon me how fortunate I was to have Sister in my life.  He would almost cry when we fought – hurting that we didn’t… Read More

We're spread out along the East Coast from Philly

We finally went back to the theater and it.was.ama

One of you suggested mixing a little Skrewball pea

We made a few updates in here over the Christmas h

Life’s a dance 🩰🎶 So thankful this little

At long last, we welcomed our neighbors back to ou