Sister brought her littles over yesterday after school for a Haunted Gingerbread Party!  It is SO nice out that we set up the little soiree on the porch.  Since I already have the porch decorated, all I had to do was set the table.  I pulled the rats and spooky trees from other places for the party. 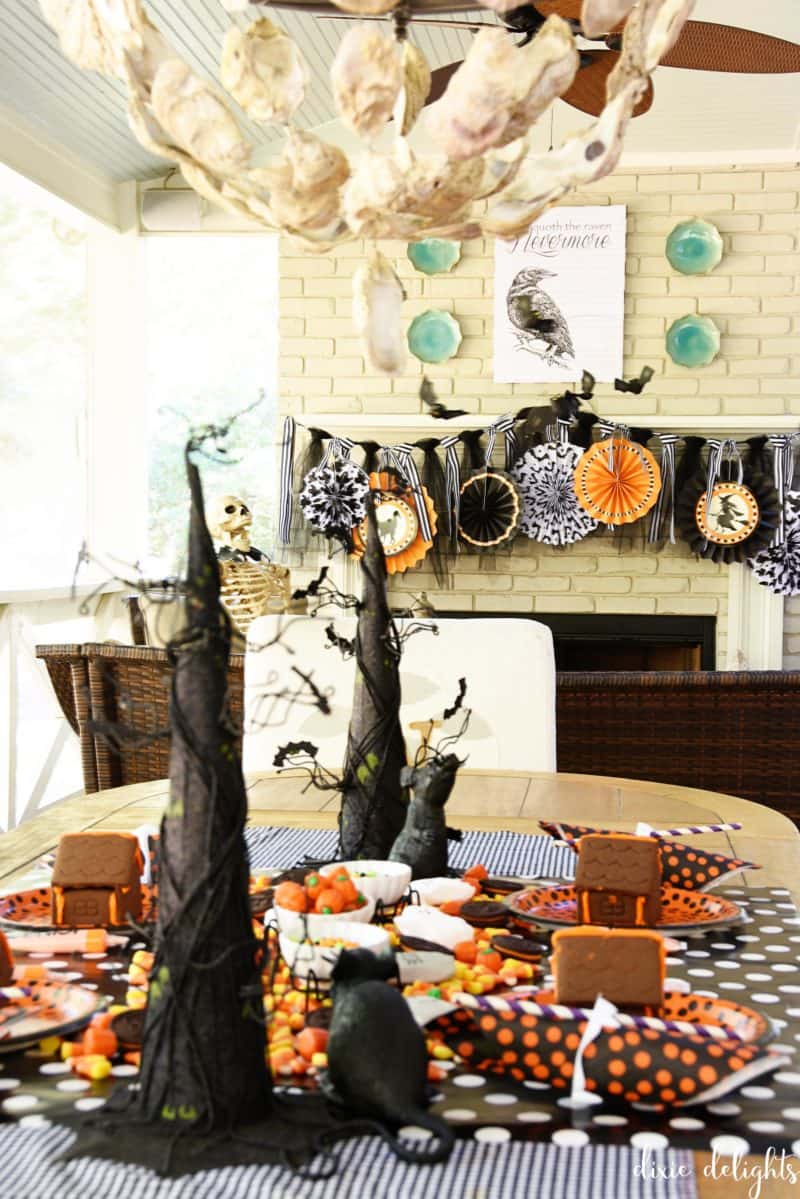 The mini haunted houses were kits from Target.  I want to say they were $3-4 each.  I went ahead and preassembled them earlier in the day so that they would have time to set and the littles could get straight to decorating.  I doubled up on the paper plates below them to ensure they were sturdy enough after being loaded up with candy and icing.  It’s also great to “glue” them to the plates with icing so they aren’t sliding around or off the plate even.  Assembling them only took about 15 minutes for all 4 of them so it was an easy process. 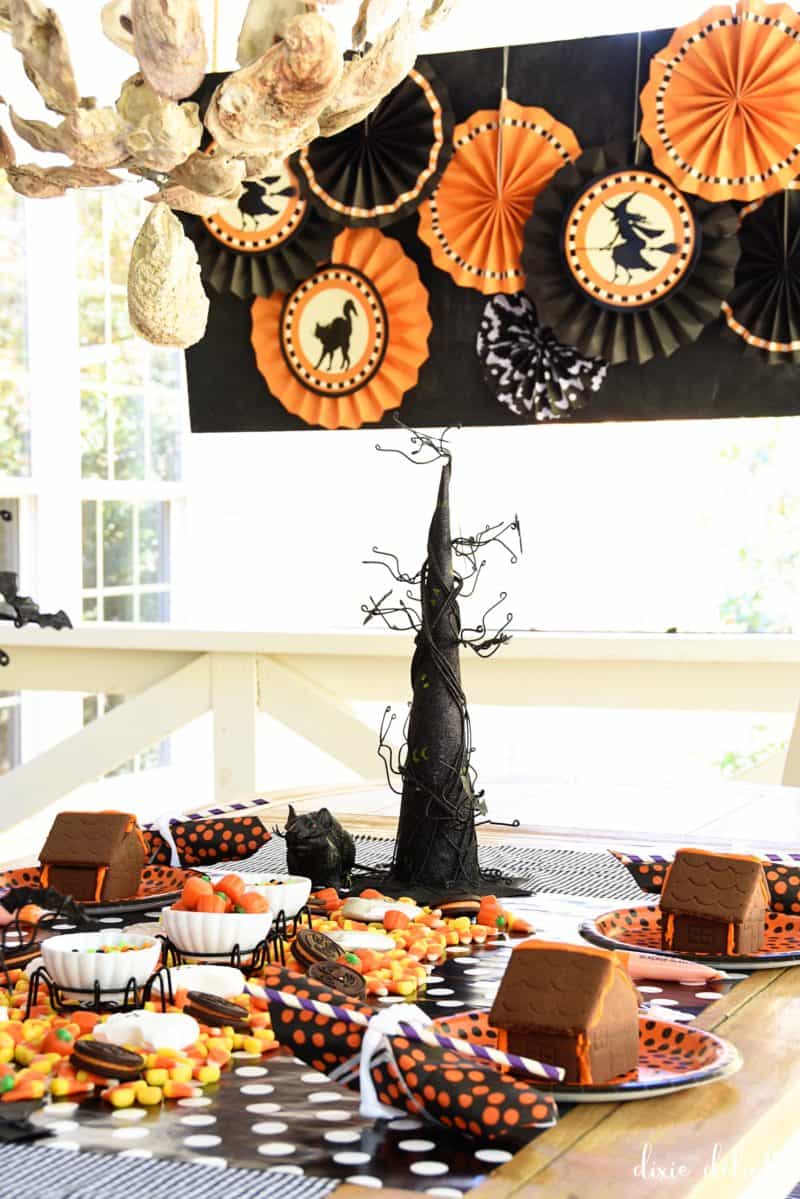 Since all of the candy was so cute and colorful, I just spread it out on the table and used that as a fun, festive and useful decoration.  I did put a big piece of wrapping paper down first which made clean up easy.  The kits only came with the little colored ball candies so I added candy corn, a few different spooky Peeps, pumpkin candies and the jack-o-lantern cookies from Trader Joes.  There was enough icing in the kits that I didn’t need to supplement. 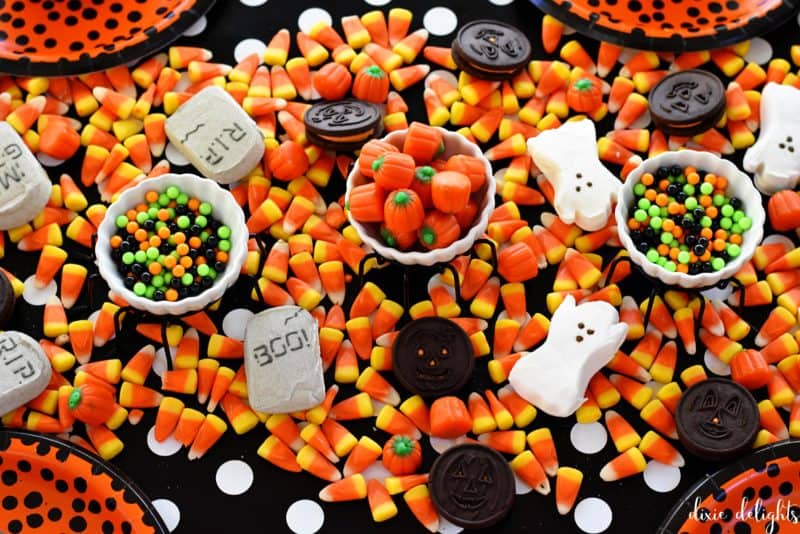 Since I knew they would all come home ravenous from school, I had intended to make them a hearty snack in these darling boxes from Oriental Trading.  They come in solid black, but I added the cute cupcake toppers (also from Oriental Trading) to them with some glue dots.  Well, by the time I got to the store I was running out of time so when the “fully loaded” lunchables were on sale I just picked up four of those and repackaged them in the cute boxes.  It turned out great and the littles were very happy with them. 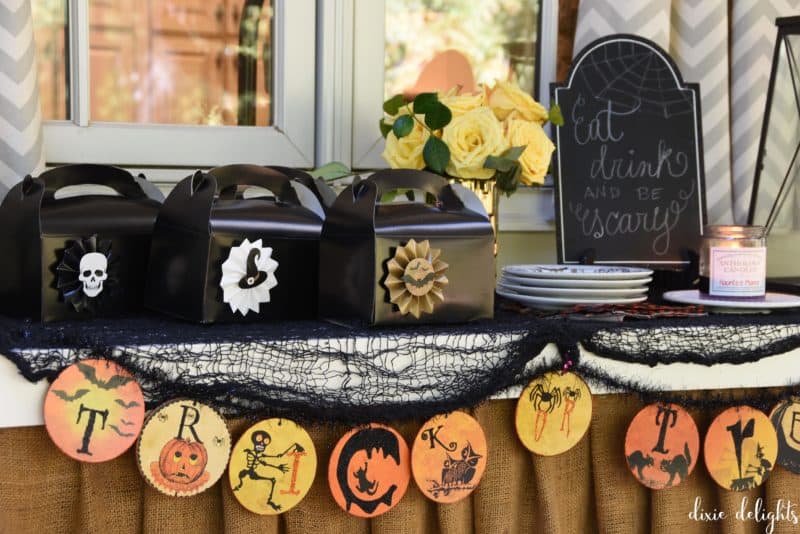 Like on the table, I pulled Halloween items from other parts of the house for the buffet table.  The chalkboard from the dining room, flowers from the den, and Haunted Manor Anthology Candle from the banquette.  We have had Haunted Mansion and Nightmare Before Christmas on Apple Music repeat so I hooked my phone up to the outdoor speakers for extra spooky fun. 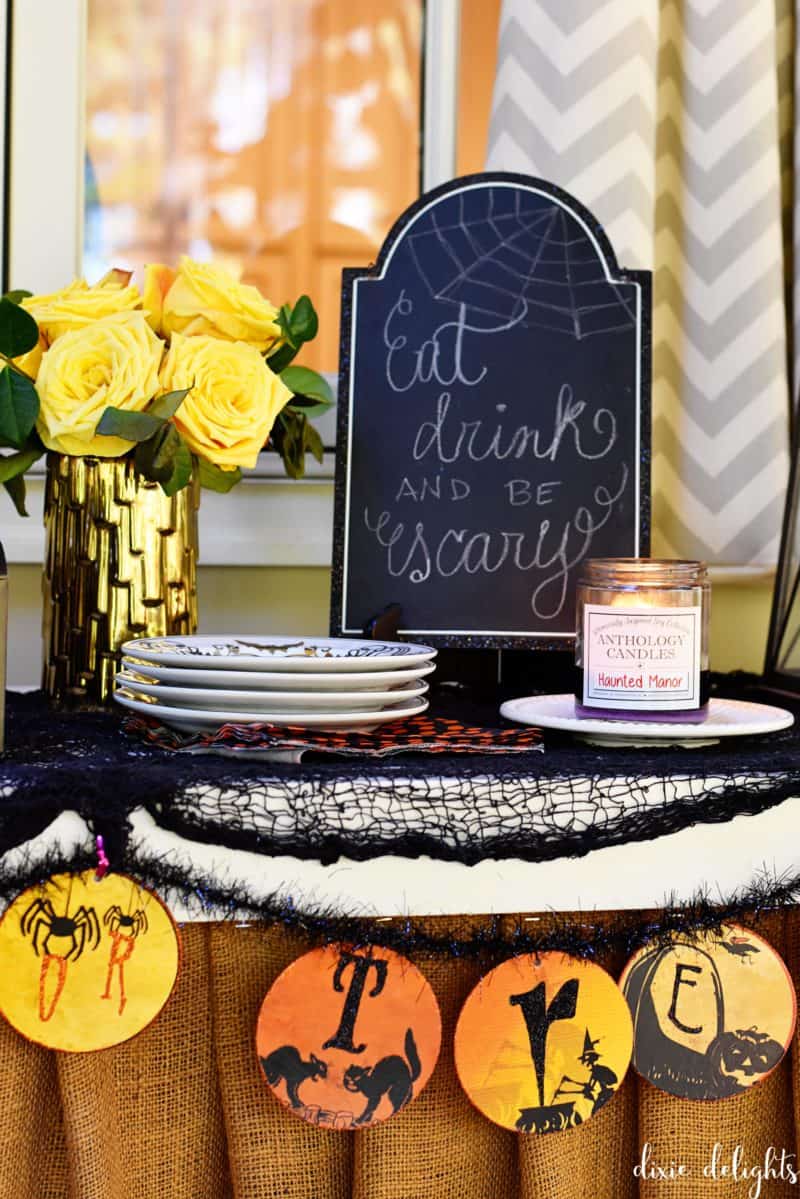 The littles were so excited to put on their costumes and get to work! 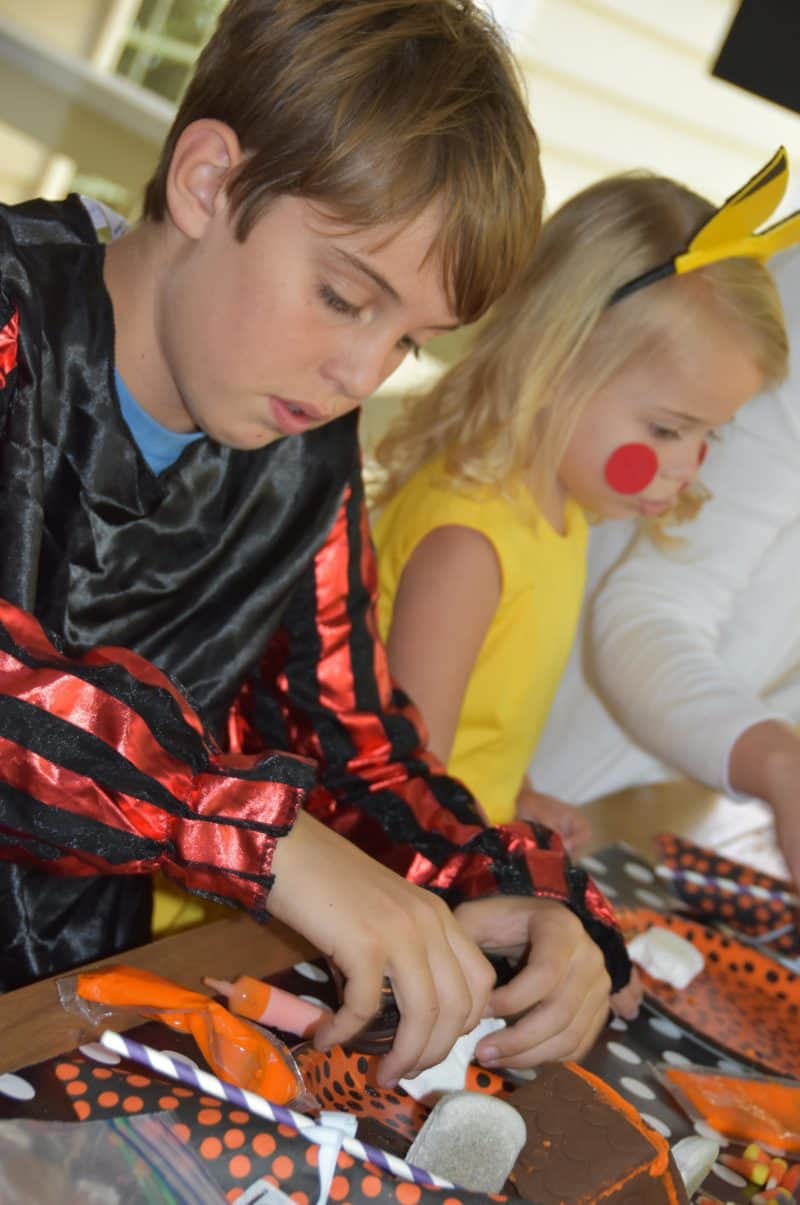 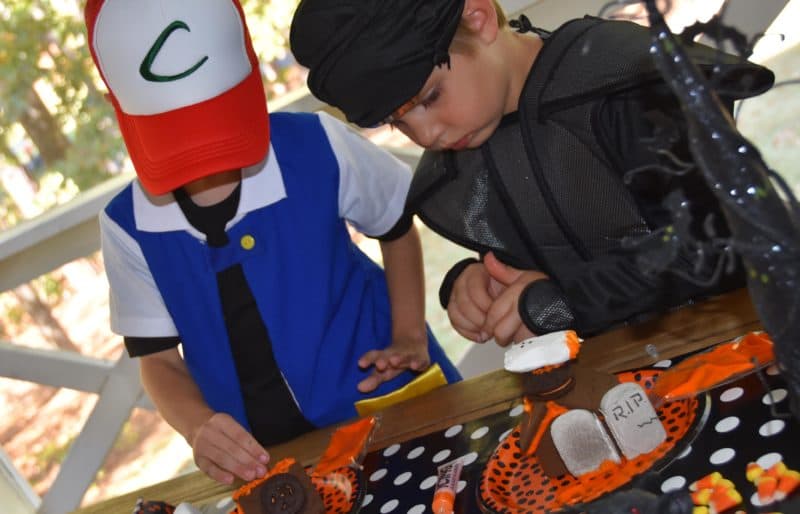 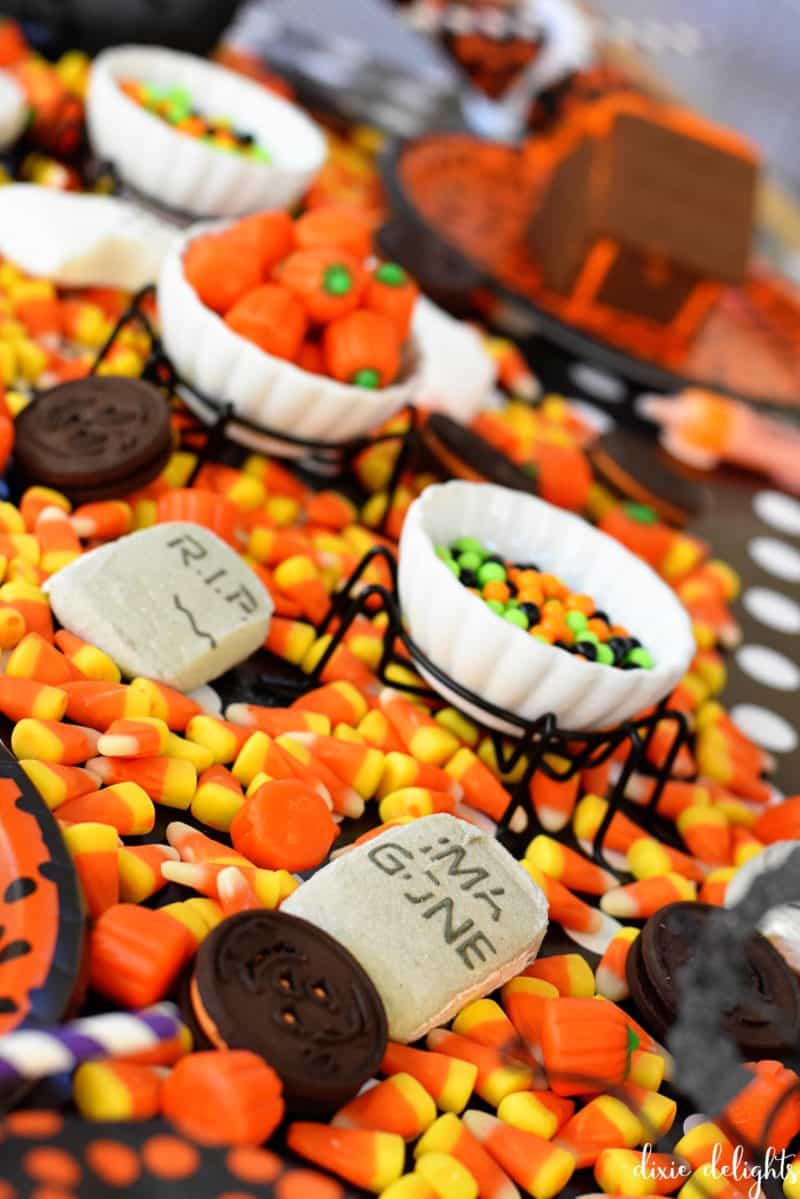 They made the cutest houses! 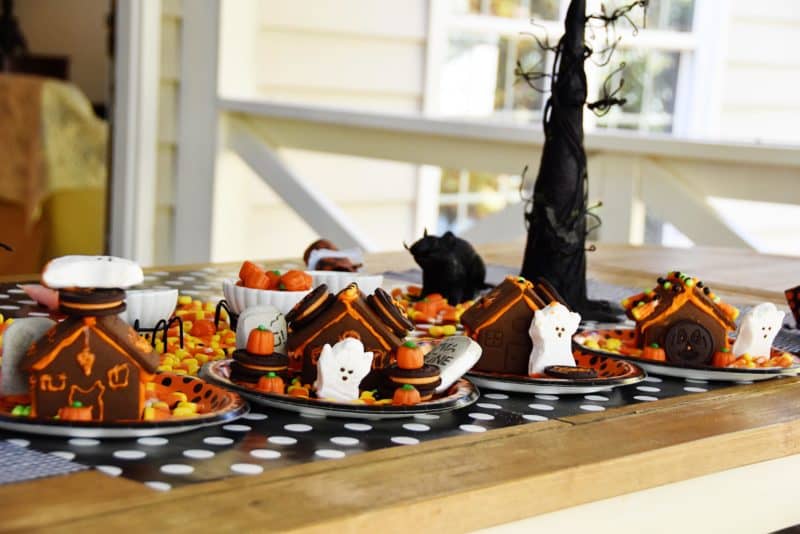 When they finished up they tore into their snack boxes.  A lot fit into these little things! 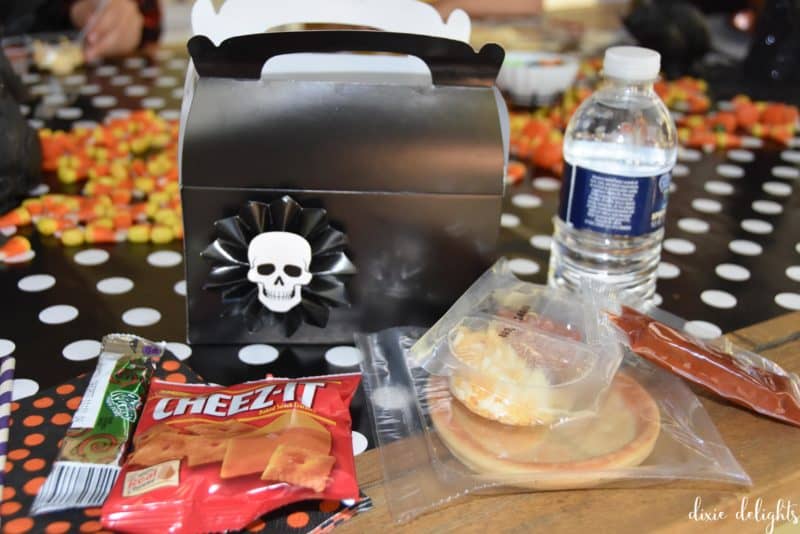 And then we made them take the obligatory cousin pic for Mimi and Ampa before turning them loose in the yard for HOURS until it was too dark to see. 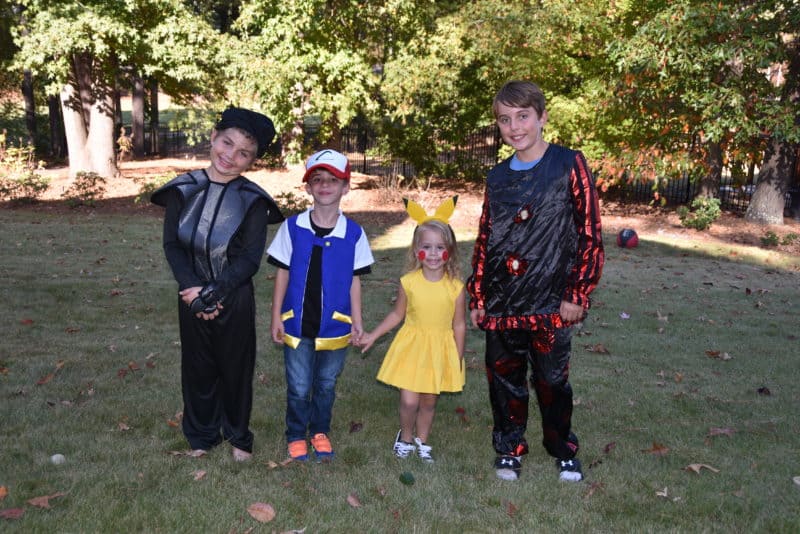 Cookie is a ninja for the 3rd year running.  I gave John full reign of the Halloween store (and it MADE his year to get whatever he wanted… it’s the little things, y’all) and he picked the dreaded clown costume of 2016.  Bird and CeeCee are Ash and Pikachu.  Mother made CeeCee’s outfit and it is SO cute.  She absolutely LOVES it.  Sister is going to add a black petticoat under it for next week. 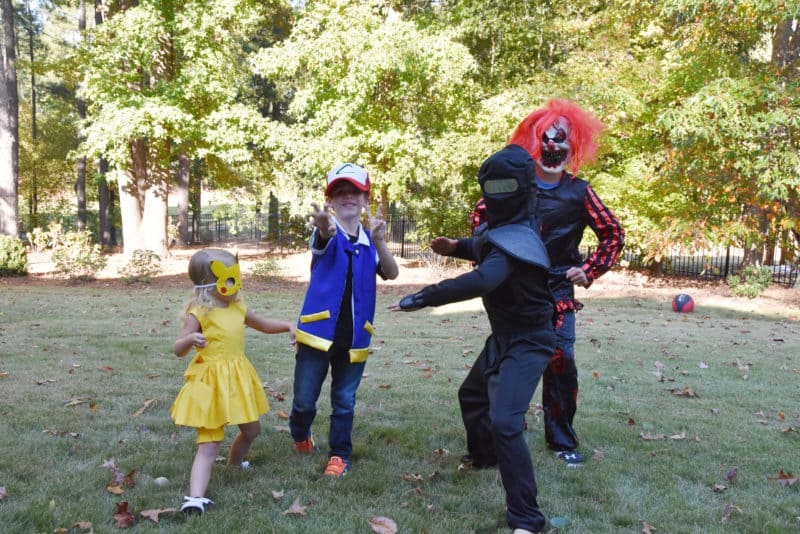 The littles had a marvelous time and Sister and I did as well.  I had hoped to use the cute houses on my kitchen table for a few days but after running around in the yard for a couple of hours, they all dove right in and were still starving.  Honey picked up a giant Costco pizza on his way home and everyone went to bed full and happy.  These are the days! 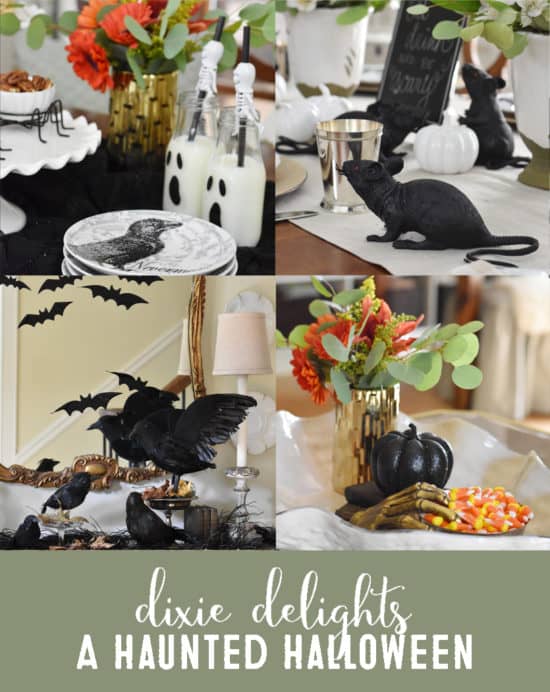 6 thoughts on “A Haunted Gingerbread Party”