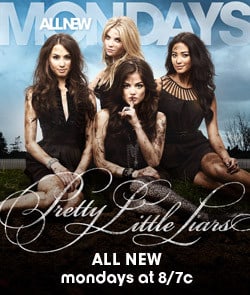 Well, it’s official, I have added another show to my teen drama repertoire – Pretty Little Liars. Somehow I missed season one (good call, N) but am nonetheless hooked on season two.  The show follows four teens that are being plagued by some mysterious character called A after their involvement in the supposed death of… Read More